Moglix Targets Large Organisation With Over $1.5 Bn Turnover And Has Scaled Over 20X In Last 18 Months

“In future, instead of buying bananas in a grocery store, you could go, pick them off a tree in a virtual jungle.” This statement from a Japanese business executive Yasuhiro Fukushima, very simply, specifies the level of ease, ecommerce has taken its millennial consumers. However, not all industries have been able to benefit yet. Of many other issues, the Indian manufacturing industry, which contributes 16.7% to Indian GDP, and is further expected to share 25% of the total GDP by 2020, is struggling hard to solve the supply chain automation snag. The 200 people team of Noida-based Moglix is determined to solve this and take a pie of $700 Bn worth Indian B2B ecommerce market, at the same time.

Moglix was launched by ex-Google executive Rahul Garg in 2014 after taking an in-depth experience of the B2B markets in China, Taiwan and even Africa. The Noida-based startup basically targets manufacturing companies declaring turnover between $15.5 Mn (INR 100 Cr) to $1.5 Bn (INR 10,000 Cr), and SME’s to help them automate their supply chain on scale, in the present largely disorganised market. The core focus of the company is on procuring and supplying utility-based products in the industrial manufacturing space, in categories such as safety tools, hardware, office supplies and more.

“B2B ecommerce is actually one of the oldest tech verticals in the US. After roaming in different markets, I realised that, in most markets, B2B commerce has remained largely offline with low adoption of tech and that digitisation of the market is happening everywhere almost simultaneously, specifically in emerging countries such as India. This led to the inception of Moglix,” begins Rahul.

After scaling more than 20x in the last 18 months in terms of acquiring users and revenue, the company now claims to have over 2,000 brands across 28+ categories, listing over two lakh products in total. It is present across four locations including  Noida, Delhi, Faridabad, Manesar and Chennai and counts 11 people in core leadership positions. During its two and a half years journey, Moglix has raised close to $20 Mn in three rounds of funding and count names such as Ratan Tata, IFC, Accel Partners as investors, among others.

A Glimpse Of  Moglix Journey: The Early Stage Hurdles

As shared by Rahul, when he started ideating Moglix, only 1.1% of the industrial buying market in the Indian manufacturing indutry was involved in organised distribution. The supplies in manufacturing industry have always been procured offline, for the last 40-50 years. This legacy way of doing things has largely been disorganised and disjointed, as businesses have not been able to automate the supply chain vertical.

Our motto was simple. Change the mindset of the management, get them amenable to buying online and change user behavior,” shares Rahul. But considering the hesitation rooted in Indian industries to utilise tech, it was quite difficult to convince them for Moglix.

After getting a thorough idea of the Indian manufacturing industry and the existing gaps, Moglix platform was launched officially in April 2015. While the first few months after launch were spent in tweaking the platform, it was only in 2016 when the company hit its stride. They went from one location to two, Delhi and Noida listing 10 categories and 50 brands.

“So, in 2016, those who refrain, turned to ‘Yes, it MAY happen’. And with the rollout of initiatives such as Digital India, Make in India, further propelled interest in manufacturing/industrial B2B, ” said Rahul. “However, the eventual demonetisation drive in November 2016, firmly cemented digital payments and, subsequently, conducting business online in the minds of the general population. Thus, now in 2017, it has boiled down to, ‘B2B ecommerce will happen. And I don’t know how to do it, so please help me’,” he added.

In its ideation phase, Moglix was incubated at SAP Accelerator, Bengaluru, thereby roping in the seeds for getting success in the traditional manufacturing industry. “We found that the manufacturing industries most commonly have SAP and Oracle as ERPs to process the internal procurement approval.”

Moglix software, built on the similar ERP approval flows, thus got easily aligned with respect to SLA (sales level agreement), tax compliance and payments compliances. Eventually, this helped the organisations in manufacturing industry digitise its procurement supply chain solution, and then to automate it.

Delivery and automation are the other two pillars of Moglix’s business model. “Delivery is the most important aspect of what we do. So, we have divided delivery into two categories. A portion of the delivery is done by Moglix itself, while the rest of it is handed over to third-party organized and local disorganized players,” said Rahul.

At present, Rahul claims that the company serves over 25,00 pin codes in India for SMEs. For the larger customers, the delivery system is divided zonally. West, North, and South. Incidentally, Moglix is not active in East India and has no presence there. The reason for this, that Rahul gives, is lack of ease of doing business, the small spread of the overall industrial belt in the region as compared to say North India or South India.

Moglix further utilises technology to set timely reminders, send price comparisons and updated category of products to ensure smooth delivery of purchase orders. In recent times, they have also introduced Green GST in June 2017 as a SaaS product. “The GST has impacted the manufacturing sector most positively, given the number of indirect taxes they incurred. Green GST automates the new taxing regulations and payments compliances for our existing clients in one seamless platform,” he adds. 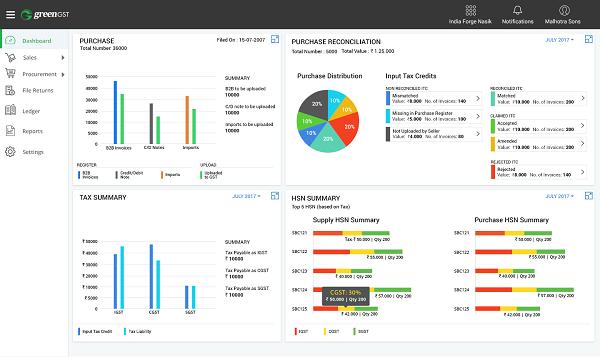 Moglix now caters to both SMEs and large manufacturing companies with tens of thousands in turnover. It counts names such as LoMax, Havell’s, Kirloskar and its clients are spread over the automotive, pharma and FMCG sectors. In 2017, they claim to have 200 large customers and about 100K SMEs that they do business with and a mix of need-based and recurring orders. The average ticket size is $155 (INR 10,000).

As shared by Rahul, for the larger customers, they offer bulk discounts, ERP related changes and fine-tuned pre-ordering SLAs (sales level agreements), where Moglix makes its revenue is by charging a certain percentage as commission on every transaction.

Here, the main concern is to ensure that manufacturing plants run smoothly and do not shut down for lack of supplies. They also utilise the latest SAP-compliant systems to enable SLAs that are carefully and accurately calibrated.

Lastly, they maintain involved relationships with these customers to ensure smoother processes. “It is unreasonable to expect that manufacturers’ mindsets will not happen in a single month. It is a continuous process,” said Rahul.

Dealing With Competitors, Fluctuations In The Market And What Lies Ahead

Demonetisation has impacted most industries in some way or the other. While digital payments and fintech, in general, have largely benefitted from the drive, other businesses like those in manufacturing industry which were formerly dependent on cash transactions took a hit. One of those businesses was B2B ecommerce company Tolexo. In the first half of 2017, Tolexo announced layoffs, citing demonetisation as a major reason for the same, followed by shutting down the company entirely.

The mantra for avoiding such pitfalls remains the same for all. “If one is not able to figure out the problem and the solution for it, then fate remains undecided,” said Rahul.

While this particular competitor ended up going quietly into the night, Moglix does have competition from other companies such as Industrybuying, Urjakart, WholesaleDock, among others. In addition, AmazonBusiness which has received in excess of $50 Mn in funds to penetrate Indian SMEs and automate their supply chain needs, is now a significant player in the B2B ecommerce space.

But Rahul remains undeterred. “We don’t worry about our competitors. Our primary understanding is to figure out how users buy offline and convert them into online users. As I mentioned already, this is a continuous process. Not an overnight one.”

And Rahul does seem to have a plan. Although he declines to reveal actual revenue figures, the Moglix team is now getting ready to expand to three more locations in India. Over the next 18 months, the company wants to go after the automotive belt in Pune, Chennai and Delhi-NCR. They are also looking to aggressively acquire 1,000 large name customers.

East India is still a no-go because Moglix enters a new market only after carefully studying several factors such as ease of doing business, how large the market is, or if it has a robust industrial belt. “If the answer to all these questions is positive and the numbers match up, then it is just a matter of how Moglix can add value to the region,” Rahul says.

For a company such as Moglix, which was started in one of the oldest and unsexiest verticals, B2B ecommerce, the opportunities that lie ahead are a different story.

With businesses becoming globally competitive and decisions taken with the speed of thought, automation is the new keyword for any industry. The recent takeover of Corus by Tata Steel and the bid by India’s aluminum major Hindalco for Novelis, show how some of the companies in the Indian manufacturing industry are aggressively pursuing global growth opportunities. As suggested by Automation Industry Association, the growth of companies in manufacturing industry will thus be determined by their ability to achieve convergence among people, processes, and technology. And this convergence is achieved through collaborative automation.

Be it automotive, pharmaceutical, industry supplies or any other segment of manufacturing industry, supply chain plays a primary role in the growth and expansion of the business. An effective supply chain management not only helps a business in enabling planners to accurately estimate future needs for supply & extends to execution with the planning of their plants, transportation & logistics, but also helps in estimating future demand for its products.

At present, Asia is a host to three economies viz. China, Japan & India and account for more than 35% of world GDP. And being a nation with the youngest population of all, India has the opportunity to scale much faster, with the manufacturing industry contributing a major portion. In line with the tech solutions offered by B2B ecommerce companies such as Moglix, and other available technologies such as RFID, the organisations need to take care of warehousing, inventory management, as well as transportation for maintaining an efficient supply chain management. Thus making the India Vision 2020 finally true.