Conquering The Events Space: Hyderabad Based MeraEvents’ Journey From 1Cr A Year To 1Cr A Day

Conquering The Events Space: Hyderabad Based MeraEvents’ Journey From 1Cr A Year To 1Cr A Day 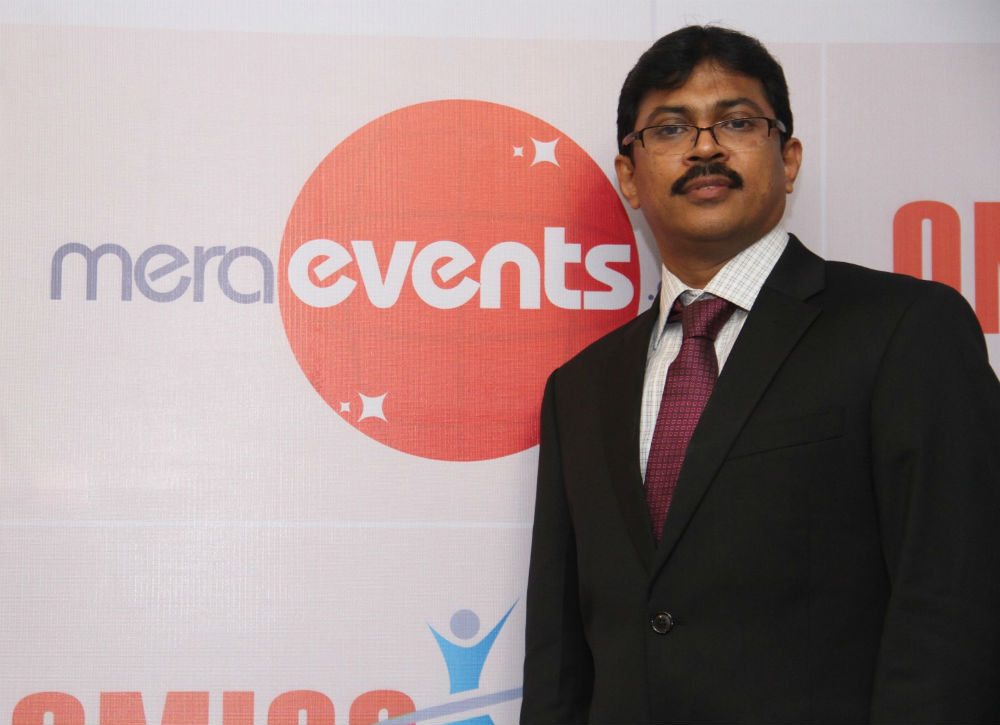 When Chennapanaidu Darapaneni moved back from the US in 2007 to India, little did he know that the answer to his quest of doing something in the B2C space lay in the space itself. Naidu was running Versant Technologies – an end to end system integration company specialised in Oracle Retail and Electronic Data Interchange (EDI) Implementations at that time. Versant was more of a B2B service company and since Naidu wasn’t sure what exactly he wanted to do in B2C, he started attending a lot of events and seminars to know what is happening in the industry. And, as they say, “What you seek is seeking you.”

Naidu found that attending these events was a pain as there wasn’t much information available about the events beforehand. Ticketing, badge printing, meeting other attendees were the other challenges. Hence, he started doing research on these events, often asking attendees how they got to know about the events. Turns out that attendees had limited ways of finding out about an event beforehand, which was either through word of mouth or through scattered information on the net. There was a lack of one proper channel where everything about the event could be known.

Sensing a gap here, he started a portal in 2009 – an event listing, promotion and ticketing platform that connects organisers, delegates, and service providers from across the country. Very tactically, the portal was named ‘Mera Event’ in order to foster that feeling of association with the event of one’s choice.

From selling $150K (INR 1 Cr) worth of tickets in the first year to selling the same 1 Cr worth of tickets in a single day, MeraEvents has come a long way from those initial years when the boom in ecommerce had just started and the startup ecosystem in Hyderabad was still fledgling. That tale is a tale full of learnings and challenges alike.

A year before Naidu rolled out the portal, he started marketing it actively and spoke about it at the events he attended. People appreciated his idea which encouraged him to go ahead. But initial sales remained tepid on account of an immature market. Event organisers were not averse to publishing their events on the portal but were not fully inclined to own the process. Most of the times, they would fail to intimate the startup about event changes which created problems in a smooth execution. Many of the event organisers were not very tech savvy, hence the MeraEvents team would publish the events for them in the beginning.

Added to that, were the troubles with the payment gateways as well as their limited number. Transaction failure rates through gateways were high, and was thus another pain point. Initially, the portal used the EBS payment gateway along with one more. Contrast that with today, when multiple payment gateways like PayUMoney, Citrus, along with wallets like Freecharge, Oxigen, etc. are being used. Thus, in the initial days, penetrating the market took time.

Even though Explara had already entered the market six months prior to MeraEvents and Bookmyshow was doing big events, no one was focusing on smaller events. It is these events that the startup started to list as well, leveraging its early mover advantage. The platform adds over 100 events daily these days, growing almost 10 times the initial number of 10 events, across various categories including Professional, Entertainment, Sports, Training, Spiritual, Campus, Trade Shows, etc. 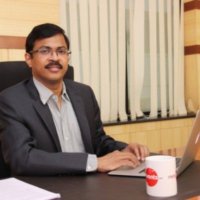 Adds Naidu, “From those initial days to now, we have grown 300% YoY for the last six years. While penetrating the market took time, but I knew it’s a 10-year-long game. The early challenges helped us in gaining clarity.”

To keep the portal going, for the first 3-4 years, Naidu relied on funding from friends and family. In December 2013, he sold Versant Technologies. The startup was able to raise $1 Mn in venture funding from OMICS International in June 2014. An additional $2 Mn from HNIs poured further as the startup continued to expand its reach to other cities, accelerate product growth and innovation and invest in additional sales and marketing resources.

Last year alone, MeraEvents sold half million tickets, doing close to 50,000 events and is aiming to clock INR100 Cr in revenues in the current financial year. However, none of this could have been possible without Naidu’s vision of adding more value to his customers rather than simply being an events listing platform.

The ABC Of The Event Industry

Naidu says that about 40 event listing platforms have come up in the last couple of years, yet 80% of the market is serviced by MeraEvents and Bookmyshow. The reason for this is that besides having an early mover advantage, MeraEvents focused majorly on solving the  pain points of the event industry. For instance, how can it sell more tickets for event organisers, address event challenges such as badge printing and solve end to end problems of the industry.

Recounts Naidu, “I remember attending the 2013 Nasscom event attended by 2000 people, wherein they got pre-printed badges for the event. However, when a lot of people turn up, processes get messed up and one is again forced to revert to the traditional method of pen/paper. I promised them that the next year I would have a better solution for them. True to my word, 15 days before the event in 2014, I wrote to them about EasyTag, an event check-in and badge printing application, eliminating the need of pre-printing badges. We executed flawlessly, wherein people walking in got their badges in less than 15 seconds. So much so that people actually thought that the lack of rush is due to people not turning up for the event!”

EasyTag is now used in over 40 countries. It simplifies the process of check-in at the events and gives real time count of attendees. It saves a lot of time and money in printing the badges, and helps avoid long queues at the registration desk by speeding up the process. No wonder, in 2015, MeraEvents was one of the 50 startups who were declared winners of Nasscom’s Emerge 50 initiative. 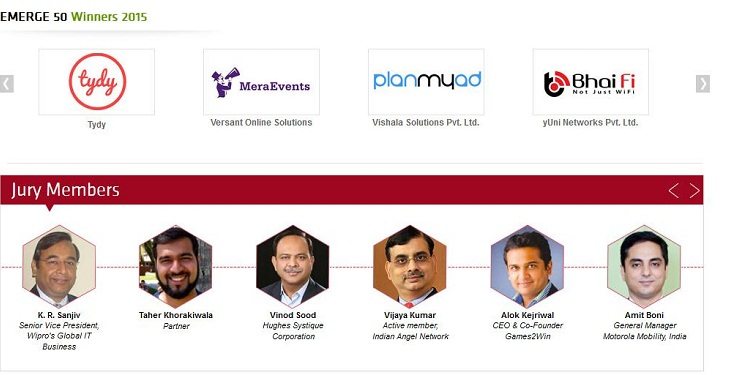 Similarly, when encountered with networking problem at the TiECon event in Bangalore, the startup tried to solve this pain point through Moozup – a mobile application to connect to others at the event, thus helping attendees make the most of these conferences. Says Naidu, “The idea was to solve yet another pain point of the industry given the fact that networking at such events is almost akin to blind dating!”

Similarly, in 2014, it came up with DigiBroc, an online platform for exhibiting and distributing information through printed brochures and catalogues.  It helps exhibitors to know the details of the visitors who sought access to digital brochure and follow up further based on the visitors’ interests. DigiBroc assigns each product brochure a QR code. When visitors or prospective users visit an exhibition stall, they scan the QR code of their desired product brochure and get the digital copy of brochure on their mobile devices. The visitor can also login and view the brochures of other stalls in the exhibition he had visited.

Having existed in the startup ecosystem for the last 6 years, Meraevents has set its sights on solving the  pain points of the event ticketing industry in India, which is a $1 Bn opportunity in itself. No wonder, Naidu is more than happy focusing on India only for the moment. He has set his sights on growing the user base to 100 Mn users, an uphill task given the challenges involved.

Naidu says, “Today event organisers are saying yes to all online event listing companies. Our direction is going towards becoming an open access portal so that anyone can sell tickets from Meraevents.” To facilitate this, the startup is exploring different ways to augment ticket sales. Through its affiliate marketing concept, it will enable even students to sell tickets from the portal.

Another way is exploring to make the event viral is to incentivise people who buy tickets to sell more tickets to friends by rewarding them through cashbacks. Also, the startup is tying up with wallets in order to increase the ease of buying tickets.

Additionally, the startup is also focusing on customisation. Going forward, with the help of artificial intelligence, the MeraEvents recommendation engine will be able to show relevant events to consumers depending on their interests and past choices. All these initiatives will be rolled into action in the coming 60 days. Through them, the startup is hoping to further augment the sales of tickets through the portal, thus helping organisers sell their events more efficiently.

In the six years of its operation, the monetisation model has remained the same. The event organisers can list their events on the platform for free, create a unique URL for the event,  pay 1.99% to payment gateways, and a 2% service charge on every ticket. They also have the option to sell directly from MeraEvents wherein the service charge goes up to 8%.

Coming a long way from 2009, the startup has grown to 60 people in Hyderabad, Mumbai, and Gurgaon. About 80% of its revenues come from Mumbai, Delhi, Chennai, Pune, and NCR. Meanwhile, competition is fast catching up, with Explara also aiming to hit around 50,000 events this year. As per Naidu, MeraEvents’ business lies between Explara and Bookmyshow. While it is doing double the number of events as compared to Explara, Bookmyshow does 3-4 times of it, given the huge number of sporting events it does.

Naidu, however, is not worried. Between Meraevents and Bookmyshow, nearly 80% of the market is serviced. So, while he is unfazed by the copycat businesses entering the mainstream, he firmly believes like that any typical B2C business, only one or two players will ultimately rule the roost. And those will be the ones who will effectively solve the existing pain points in the industry, which to a new comer looks like a hugely attractive market. But as Naidu’s experience would tell, there is still a lot more that can be done in this industry – never mind the INR1 Cr worth sale of tickets in a day!