9 Months, 3.5K Contracts: How LegalTech Startup SpotDraft Is Using AI To Bring In The Tech In Legal

9 Months, 3.5K Contracts: How LegalTech Startup SpotDraft Is Using AI To Bring In The Tech In Legal “Ultimately lawyers are like programmers, only difference being, they code/write in legal language, which in most cases is English,” says Shashank Bijapur, co-founder of AI driven legaltech startup SpotDraft and a former Wall Street Lawyer.

It is this belief which led Shashank, a Harvard Law School graduate, from the echelons of Wall Street to finding a startup in the legaltech space which would be capable of using AI to read through contracts, organise, manage and finally, analyse them.

But we are jumping the gun here. Roll back a few years to Shashank’s Wall Street days where he saw day in and day out what lawyers did.

“I am a lawyer. I have seen upfront what lawyers do and how they work. I realised that the process is too time consuming and riddled with inefficiencies. I have sat down on the other side of the table with clients and seen them take long to do something very simple. Despite working on similar deals, we still have to create additional paperwork,” he reveals.

And he often wondered, what if a client could simply press a button and a draft of an offer letter would be sent to prospective employee? Or a termination notice? How if instead of laboriously drafting these things or hiring an expensive lawyer, these could be done at the simple press of a button, at a fraction of a cost?

It is with these thoughts in mind and a chance meeting with Madhav Bhagat, who is now the co-founder of SpotDraft and had previously worked with Google in New York, which led the duo to figure out a way to solve these problems.

The duo realised that what was needed was a simple way to automate things and this is where Madhav’s work experience and his Carnegie Mellon pedigree came in handy.

Shashank points out, “If you look around, the world has essentially moved to less paper driven products. So look at what AutoCAD in engineering or Adobe in photography has done-digitised a paper process and made it more accessible. However no such improvement has happened in the legal space. In 1995, Microsoft introduced a patch called Track changes to their MS Word program. So people moved from sending faxes to emails in track changes. But fast forward 22 years, nothing has changed. There has been zero innovation in legal field which is where we see ourselves coming in.”

SpotDraft: Bringing In The Tech In Legal Through AI

Thus was born SpotDraft in January this year. It is an AI driven end-to-end contract lifecycle management platform. Currently, aimed at small businesses and freelancers to help them draft solid contracts, send automated invoices and payment reminders. But going forward, the AI platform will be able to read through contracts, organise, manage and analyse them. The idea is help companies manage their legal work at a fraction of the cost and time with SpotDraft.

However in the initial phase, the founders wanted to hit the sweet spot with the right product fit. And that’s where came in the freelancer community. There was a solid reason behind it.

Explains Shashank, “Why we targeted freelancers was because they can adopt to a new technology easily and propagate it as well by word of mouth. If you Google freelance writing contracts, you will find hundreds of drafts online. They just pick them up and edit and use it without knowing what’s really inside. But even after drafting a contract, they still need to revisit to determine what was written, when is it getting terminated, for sending invoices et al. So we decided to automate that entire process for them.”

So SpotDraft also not only claims to let anyone create a contract in less than 10 seconds, but also allows users to sign it online, send automated invoices which are GST compliant, and even send payment reminders. Ultimately, what it aspires to be is an end to end contract lifecycle management system. 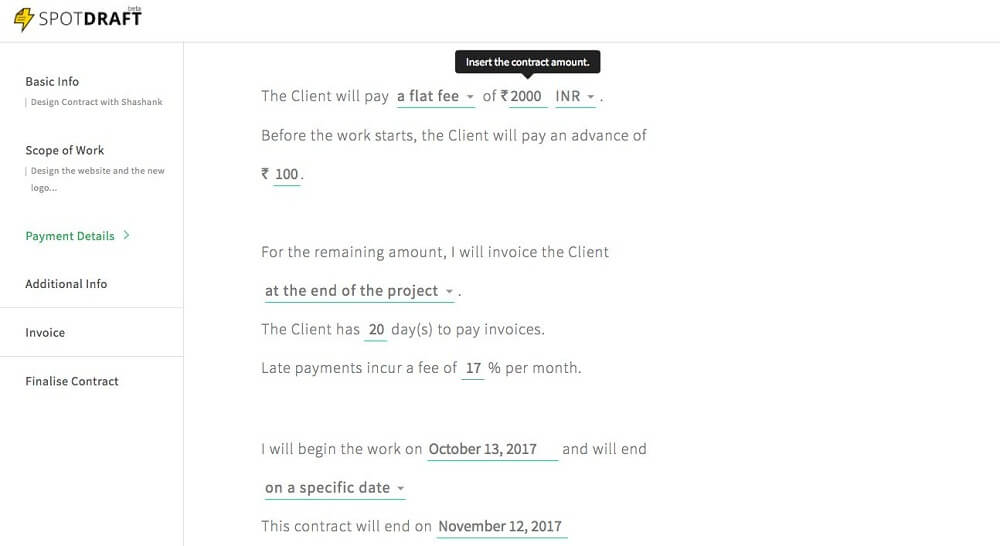 And even more. Technology has now reached the point where it can crunch words to understand their meaning and make a use case out of it. The founders are aiming to use that very technology in SpotDraft, which can get into a contract and give the user the gist of the ‘good, bad, ugly’ in the contract.

Hence, a user can simply upload all his contracts at a go; and whenever he opens any contract, he would be provided with the gist of the contract or reminded if a contract has to be renewed or is getting terminated. To build this function, about 4.5 Mn contracts have been studied by the team to understand the market standards and build the algorithm for the same.

So while its current target market is the freelancer market community, going ahead it will be targeting any small business or startups or anyone who signs a contract or has a bunch of contracts but does not know how to manage them.

The legaltech startup which is still in beta phase plans to launch the inbox in the next 2.5 months. However, it has managed to get about 6,000 sign ups on its platform and has processed close to 3.5K contracts, riding on the back of the freelancer market. The startup’s focus on getting virality for the product early on is what has led them to target the freelancer market. The idea is simple. Every contract has two parties. So if you send a contract from A to B, and B is not on the platform, B has to sign up in order to view the contract. The experience gives them a chance to see how SpotDraft works and then use it themselves. This in turn bolsters both its adoption and its retention rate

Hence without spending a single buck on digital marketing, SpotDraft has managed to gain and retain a sizeable portion of its initial audience.

As of now, the product is free to use and contracts are not being charged. Monetisation will come in place when the startup has a larger contract database. So for instance right now, it is offering upto 15 contracts, and it wants to raise that number to 200 contracts. Shashank sees this happening early next year.

However unlike their existing competitors, SpotDraft would not charge per contract. Shashank believes that this method of charging is no different than going to a lawyer. Hence to ensure regular usage, SpotDraft will charge its users for the usage of the platform. Hence the startup will follow a SaaS freemium model where say upto the first three contracts and one active client at any given point of time will be charged at a flat rate (which the startup is still figuring out).

Moreover, the team of six has set its sights on entering global markets as well. Says Shashank, “It is not going to be an India centric product alone. Any place that signs contracts in English/ Latin as one of its languages is our target geography. And of course while there are geography specific things rules that apply to contracts, the basics of a contract will not change.”

Hence the startup, which is currently in the process of raising its Seed funding round,  is looking to position itself as one stop shop to do all of one’s legal stuff.

SpotDraft And The Legal Tech Space

While technology may been slow to pervade the legal space, nonetheless legaltech is witnessing the emergence of more players. For instance, there are companies like San Francisco based Rocket Lawyer which provides individuals and small to medium-sized businesses with online legal services as well as drafts online contracts and legal documents. Then there is Chennai-based Vakilsearch which connects clients to lawyers and MyAdvo, a legaltech concierge that helps its clients connect to lawyers for their legal needs.

Similarly there is LawRato, a legaltech platform providing expert legal advice and counsel to enterprises and individuals. Similarly, Delhi-based LegalRaasta which is an online platform for business registrations and compliances. Something similar to SpotDraft as far as using AI is concerned is the virtual legal research assistant, CaseIQ, developed by Aniruddha Yadav to automate mundane tasks that are largely the responsibility of flesh-and-blood lawyers.

Shashank however believes that SpotDraft is doing a bit of what everyone else is doing and yet completely different things as well.

“So SpotDraft not only drafts contracts for the user but its AI also tells the user what is good and bad about his existing contracts, and we make it so affordable and universal that you don’t have to shell out thousands of dollars in licence fees to us. We want to offer it at a price point that is unbelievable,” he explains.

Also, another differentiating factor is that it offers an integrated contract management solution where the focus is not on the contract but how it affects the business; what to do when a contract is expiring; what needs to be done when there is a breach; and ensuring compliance issues are taken care of.

Moreover, going forward, it will offer services wherein if it detects a breach of contract, it will inform the user about it, and if the user wants to send a notice, SpotDraft will draft a notice and the user just has to digitally sign and send it. It will also keep the user abreast of what contract is expiring or if a contract needs to be renewed instead of the user going and opening each and every contract.

So the aim is to offer services a lawyer would do at a margin of the fees he would charge and at 100% efficiency.

As per Truelancer, an online marketplace for freelancers, the freelance market opportunity is worth $2 Bn-$3 Bn globally, of which India accounts for $1 Bn. This means a growing opportunity for legal tech firms like SpotDraft as far as the contract market (minus the enterprise level and comprising only the mid-tier market) is concerned, which as per Shashank is about $8 Bn globally.

Moreover with its focus on targeting startups, it will be able to leverage yet another growing space given that hundreds of companies are incorporated in the startup ecosystem on an annual basis. As per a media report, the total legal market in India is $10 Bn of which litigation alone is $5.05 Bn. So even if right now, SpotDraft is in its current avatar, a  freelance and small business contract creation and invoice sending tool, as it transitions to it full-fledged version of an AI and Machine Learning driven end to end contract lifecycle management product, it will have a bigger field to play. The challenge is that like SpotDraft, many other legaltech startups are also employing AI to automate the mundane legal stuff for end users. How far will these startups be able to garner users’ trust- a strong factor which drives users to lawyers for their legal needs- remains to be seen yet.