When Samar Singla and Chinmay Agarwal started Jugnoo in 2014, they were clueless about the impact they were about to have on the daily lives of people. While initially, the duo launched an autorickshaw aggregator platform as a lark, they soon realised the mess they had stepped into. While autos are used as the major mode to commute for many in India, the segment is still troubled with serious issues such as recalcitrant drivers, exorbitant fares, and non-availability of autos.

Today, after being in business for over 20 months, with two more co-founders Isha Singla and Nitish Singh and a team of 300 employees, Jugnoo is handling 40,000 daily commuters, 3.5 Mn registered users and 12,000 auto rickshaw drivers in more than 40 cities in the country. It has to date raised $16 Mn funding and is backed by marquee investors such as Paytm, Snow Leopard Technology Ventures, Rocketship.vc, Kunal Shah, Chris Kolenaty, Rakesh Mathur, and Vikas Taneja.

“The initial journey was tough but rewarding. In the beginning, it was difficult to convince drivers and gain traction. Since we were targetting Tier II cities, the demography was very different. Where drivers were reluctant to use a tech-enabled platform, it was very difficult to make the commuters understand that this is also a way to do this. But eventually, when demand creeps in, things started moving smoothly and we were big enough for people to keep coming back.” “Long term success is built on a strong foundation.” With this belief, from the beginning, Samar focused on making the fundamental base strong for Jugnoo. With 100 drivers enrolled in the first month of launch, Jugnoo’s journey to date has been driven largely by innovation. It is currently growing with an M-o-M growth rate of 20% with Tier II cities leading in terms of registered users, average daily user count and the number of active users.

From the initial days, the focus has been on being a tech-driven company and to introduce possible value-added services for the consumers. This paved the way for lots of tie-ups and a few acquisitions.

In order to increase its market outreach and add to its user base, Jugnoo tied up with companies like Helpchat (a personal assistant app), ixigo (a travel search engine), zophop (a public transportation information mobile app), OyeTaxi and Scoot app (meta-search platforms to compare modes of transport on price basis). While MobiKwik and Paytm add-on the power of digital payment, Punjab National Bank, and Piaggio provided easy financing options for new drivers.

It further extended its app-reach by introducing it on all major OS including Android, iOS, and Windows and further expanded its services beyond Tier I and Tier II in small towns and rural areas. It also strengthened its team by roping in industry mavens like Anand Prakash and signing TV celebrity Saumya Tandon as the brand face.

It also came up with various product innovations and new services such as Fatafat, Dodo Deliveries, Jugnoo Bot, Flight Map, a multilingual interface for drivers and more. “For Dodo Deliveries we have just made our first city, Chandigarh, cash flow-positive. We have made a decent amount of money and transactions in both Dodo Deliveries and Fatafat and now we will go towards becoming profitable one by one,” says Samar.

When asked about the three most innovative developments at Jugnoo, he says, “First is the Jugnoo Bot because it allows you to use Jugnoo from any platform you are on even without downloading the app. Next is Flight Map as it saves 30% of time and fuel for drivers with proper optimisation of routes and resources. Apart from these, our backend interface that allows drivers to get more income opportunities other than rides such as deliveries and all other sorts of jobs, I think that is really innovative.”

Here is a glimpse of Jugnoo’s timeline showcasing major events to date: 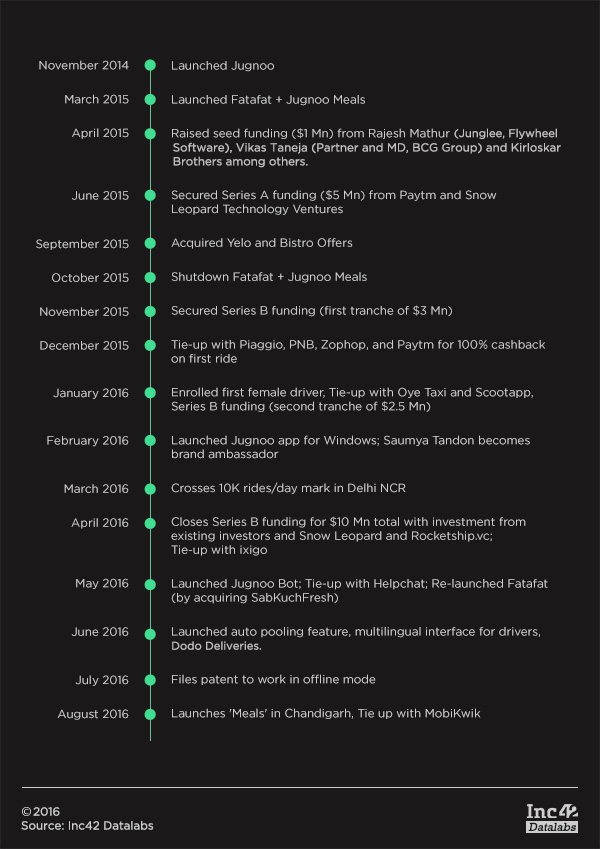 The Highs And Lows At Jugnoo

While things were smooth for Jugnoo’s team in the initial four months of launch, the bumpy ride began when it launched Jugnoo Fatafat in March 2015 – to deliver custom orders for its users to their homes, from stores within the city.

It was shut down in October after operating for about eight months and was relaunched in May this year. Currently, operating in Chandigarh, the service lets users order fresh fruits and vegetables at their doorsteps, at affordable mandi rates.

A similar story goes for Jugnoo Meals – which delivered fresh, home-cooked affordable meals at user doorstep – which was shut in October 2015 due to lack of infrastructure. A revamped version of its ‘Meals’ services was launched in August recently. Although the model remains the same, the company has claimed to revamp the menu and the back-end processes for the service.

Nitish Singh, Co-founder, and CFO of Jugnoo who also heads the Fatafat and Meals vertical has this to say regarding the continuous shifts:

“Any business model that is good, will be assuming that everybody in the world will be rational. But when five or 10 companies start literally burning money in the bonfire, you have a choice. We have raised $16 Mn to date and have spent less than 50% of it. We are a really conservative company when it comes to cash. When we found that people have started spending aimlessly on it, we shut it down. And guess what? In less than a year, all those companies are either shut down or have rolled back from the market. So we opened it again to fill the vacuum with a more educated audience.”

When we asked about the mistakes Samar thinks that this issue could have been avoided at the earlier stage, he adds, “Hiring teams is essential to growing a company. Initially, we hired a lot but now we realise that having a lean yet productive team is better for growth. Also, in the very early days like first six months or so, we were not that much data-driven and that’s one thing we should have done. But now, at the end of the day, I know which city is cash-heavy, which city gained – the complete P&L is done at the end of the day itself.”

Bringing A Change For The Autorickshaw Driver Community

A typical monthly income for a driver associated with Jugnoo is INR 8,000 which reaches up to INR 25,000, for really motivated drivers. “We are not a company that advertises perks as this show weakness in your business model. Our trick is simple – increase their incomes. I think that this has helped us and we have been able to create a grassroots difference and change to drivers income,” says Chinmay. 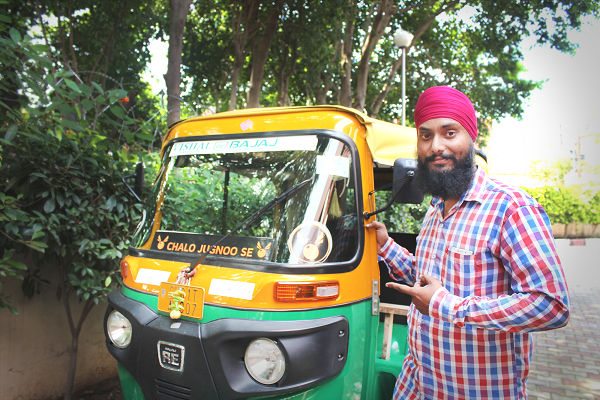 Jugnoo also encourages equality among drivers and has introduced women drivers on its portal. Meet the first lady driver enrolled at the Jugnoo platform in Mysore. Coming to challenges, apart from language, literacy and cultural diversities, lack of tech savvy among drivers is another major issue which Jugnoo has to deal with . As Samar says,

“We have to deal with drivers who are uneducated and are not comfortable using smartphones. We have our own training programmes, but then how much can a single company do? This has to be an industry initiative. We are actually trying to look up skill development in India, like a tie up with the government, to impart some basic learning to the drivers so that it becomes easy for them to adapt the technology. A guru-chela (teacher-student) system is there that as an industry is not working for us, and somebody really needs to address that.”

The Best Way To Deal With Competition Is To ‘Ignore It’

According to Samar, their strategy to deal with competition is to ignore it altogether. He believes that there is no need for a startup this early to actually think about competition. “Look at 100 startups that have failed or not failed. None of them would have failed because of competition, but may be because of their execution strategies,” he says.

Every day there are 30 Mn autorickshaws rides taken in the country. Jugnoo is currently doing just 0.1% of the total ride volume. If we talk about Ola, their total rides for a day is approximately 400,000, where the major share is of cabs and not the autos.

“So you think this way, the biggest aggregator of the country is also less than 1% of just the auto volume. We think we are the biggest ones in autorickshaw segment,” says Samar. He further adds, “Also, with Flight Maps we are going full on against Google Maps, and the other hundreds of mapping technologies. So we are not overly thinking about competition. Our focus has been looking at needs of the market, addressing them one by one and we have got the platform to do it.”

Jugnoo has been growing largely through word of mouth. Samar believes that stimulating online word-of-mouth regarding their activities enabled them to expand and capitalise on the buzz network and also engage in referral campaigns. “Promotions via various social media platforms is another strategy we implement because of the huge reach that comes with it. Also, the conversational nature of social media enables us to have an active dialogue with our users and cultivate relationships based on their needs,” he adds.

According to Samar, “In the journey to date, we realised that no company has a reverse journey. Every company has faced different problems at different times. Like, when we launched, we were troubled with – will our proof of concept work? Will people fund it? Will we be able to attract talent?  I think we have solved these three problems pretty well.”

He further added that the next big problem was – what is the innovation to be done to make it a sustainable grassroots business. “We have built a platform, we have built a company, but we still need to figure out minor points around the business, how do we innovate and make it profitable – that was the next challenge for us.”

With Samar being a die hard fan of Amazon and Alibaba, he believes that although these companies have not been profitable in a sense, they always had centres at the core – and the cores are always profitable. As he further mentions,

“They were actually able to build one thing after the other, backing that core piece. I think most companies in India are comfortable with not having any profitability core, but that’s not how we think. Our next step is to get profitability and growth both, and have pockets of profits which are actually growing as the company grows.”

The founders are further targetting to expand into 100 cities by the end of this year. Also, geographical expansion across the different verticals of Fatafat, Meals, and DoDo Deliveries is in the pipeline.

Autorickshaw aggregation is a market worth exploring with 30 million rides being taken around the country every day. Jugnoo, while being in the position to become a market leader, will have to contend with the likes of Ola and other aggregators who already have the infrastructure in place to take on another vertical: autorickshaws, in their quest to dominate the market. Will it be able to sustain its profitability core, remains the billion dollar question.