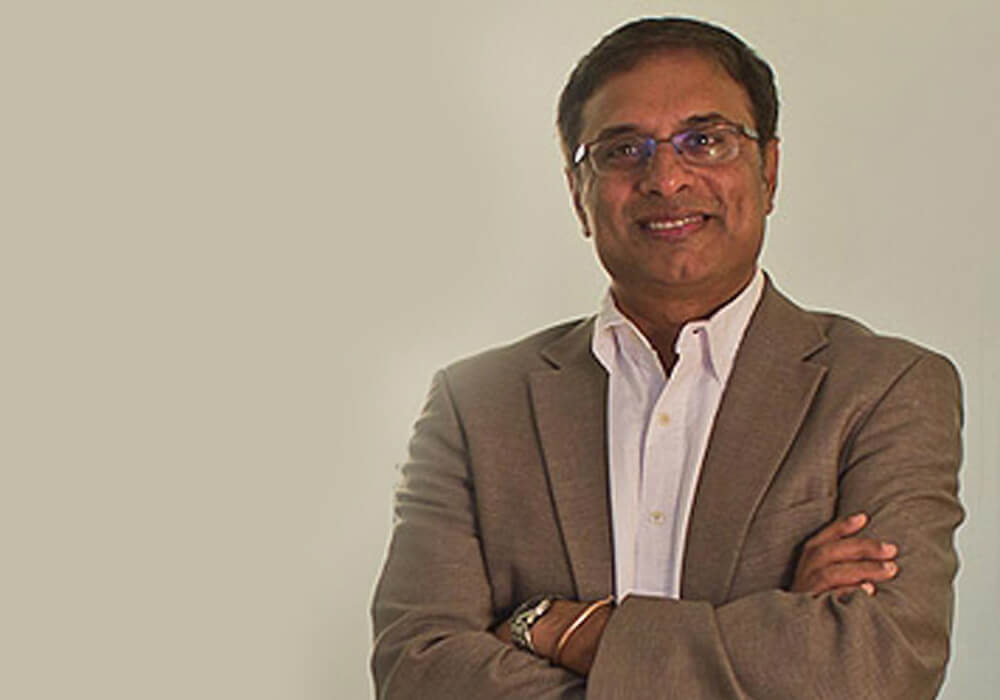 Once a techie, always a techie. Ramesh Radhakrishnan, Partner, Artiman Ventures, an IIT alumnus who holds two patents and an entrepreneur who co-founded two startups, is currently a VC eyeing to invest in disruptive technologies. And, like Ratan Tata, he hasn’t found many such startups offering disruptive solutions to invest in India. Sitting in his office at Hulkul Centre, Bengaluru, Ramesh listens to a number of startup pitches on a daily basis; yet, unlike his Silicon Valley experience, he rarely finds an idea enough to be pursued further.

“At Artiman, we are keen to invest in disruptive technologies or startups that are at the intersection of multiple markets or technologies or both,” says Ramesh Radhakrishnan in a candid conversation with Inc42.

Artiman Ventures is an early stage “agnostic” venture fund with a total corpus of $1.1 Bn. Based in Silicon Valley and Bengaluru, the 16-year-old investment firm has currently 30 startups in its portfolio while it exited from few and has written off its investments in four-five startups. While, as far as India is concerned, Artiman Ventures has funded eight startups so far. Ranging from medtech to healthcare to AI to ecommerce, Artiman Ventures’ portfolio is diverse to its core.

Artiman Ventures And The Art Of Investing 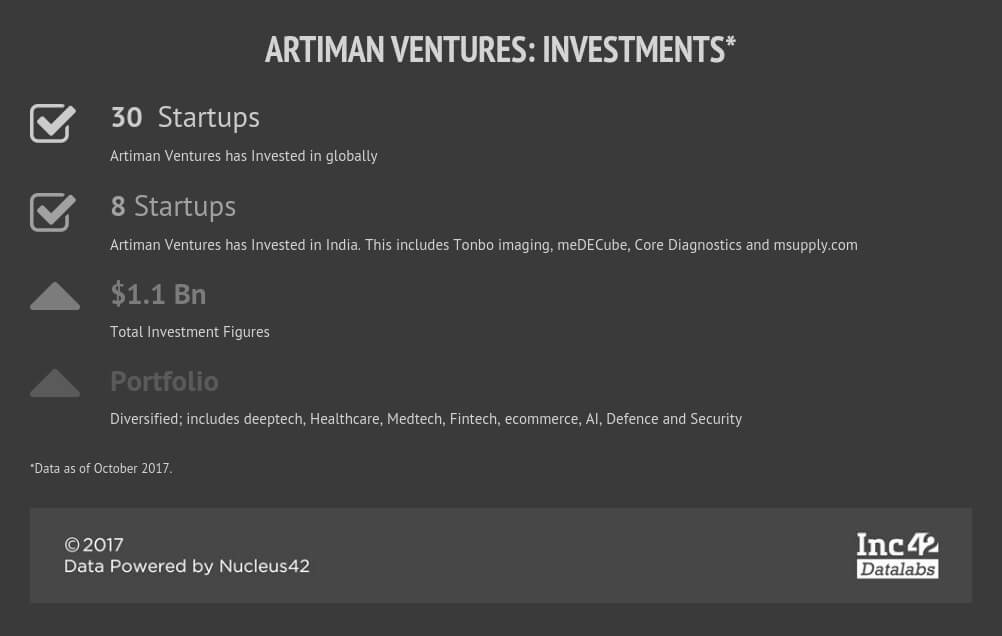 Artiman Ventures is currently looking to invest in whitespace startups i.e. startups which could either disrupt the existing market and make its own or provide a wide platform that could find applications across the verticals. Once onboard, the investment firm brings everything to connect the dots in terms of design thinking.  “At Artiman, we all are entrepreneurs-turned-investors. Each one has undertaken a long journey before he or she became an investor. Hence, once we associate with a startup, we do share empathy, curiosity, passion, patience, and experience with the founders,” says Ramesh Radhakrishnan.

The sector agnostic VC fund is focussed upon investing at early-stage and early-to-growth in tech startups. In India, so far, it has invested in healthcare, specific areas of ecommerce, deeptech, defence, and meditech. For instance, it has invested $4 Mn (INR 25 Crore) in Series A funding in Gurugram-based healthcare startup medECUBE which is an ‘asset-less’ care coordination service venture.” 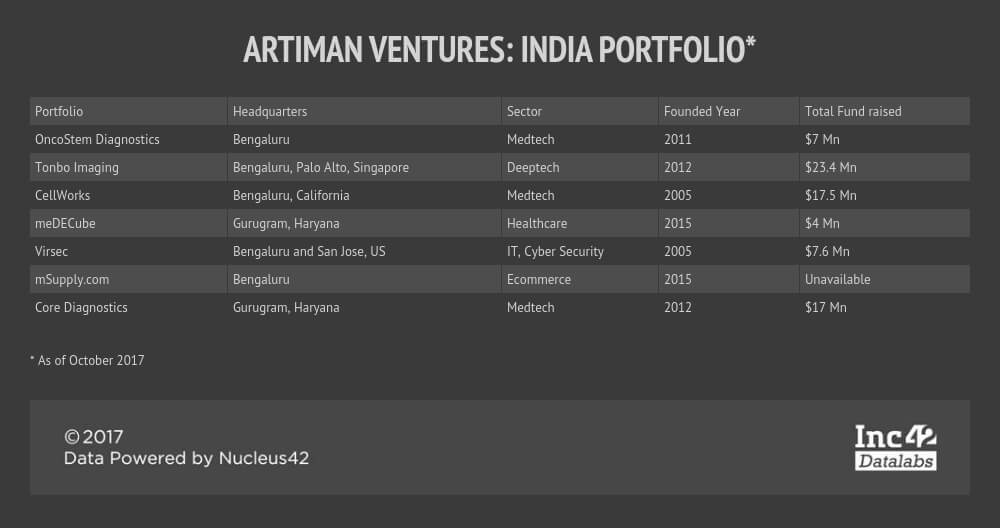 Artiman is also introducing US-based startups having cutting-edge technology to the Indian market. Seeking to invest for the long-run, it has also incubated some of these startups. Additionally, it has also collaborated with universities and other accelerators to stay updated with the latest technologies – technologies that could be commercialised.

“The Indian market is huge but not ready to absorb cutting-edge technologies. In the US and other developed countries, a large focus is currently on self-autonomous driving. However, in India, it is extremely difficult to focus on or deploy such technologies owing to road encroachments and laws not being implemented at the ground level.”

Speaking on few more sectors which Artiman Ventures is excited about, Ramesh Radhakrishnan gives an example of agritech, which he believes is another good area to invest.

“These are the areas waiting for right kind of technologies and entrepreneurs. There is a huge room to improve the efficiency when it comes to cold chain logistics, weather pattern, pricing, etc. I do believe that lot of work could be done in terms of crop optimisation and soil mechanics.”

Though definitely interested in agritech, however, he is yet to meet the right startups. Citing the reasons, he says that in India, from state to state, agricultural circumstances change rapidly. The soil mechanics, weather analysis, water availability everything changes. Hence, farm to fork sector needs platforms that could be implemented in all these circumstances.

Coming to the selection of startups Artiman Ventures looks to invest, he added that there is no preference of one parameter over the other. The firm looks for each and every parameter of investments; be it, ideas, innovations or technologies, their execution scale or founders’ profiles.

“At the end of the day, our goal is to develop Unicorns from India, for India. That is achievable if we have the right talent, right idea and right market to go after. Then, we will see lots of success.”

In India, Artiman has plans to invest in one to two startups every year, somewhere between  $4-8 Mn in every startup. Ramesh Radhakrishnan points out that this number is less when compared to its investments in the Valley where it invests in three-four companies annually, precisely due to the eco-differences.

Ramesh Radhakrishnan On The Ongoing Trends In The Indian Startup Ecosystem

This year, only 800 startups have been founded so far, against the 6000, last year. Ramesh Radhakrishnan opines, “The Indian startup ecosystem is exactly like what the US’ was in the 1970s. That was the time when the startup ecosystem was still in development phase. Even though there were a lot of electronics and software startups coming out, it took decades to build an ecosystem to ensure the success rate. So, in India too, initially, you may not see a good success rate currently, however, once the ecosystem is built over. Things will turn.”

“The Indian skills are on par with Silicon Valley. Go to Google, IBM and other companies, you will find that the top-notch AI developers are actually Indians.”

India has got a pool of entrepreneurs, VCs to invest; and most importantly, enough market to consume or buy the technology. However, “startups will have to make consumers consume those technologies,” says Ramesh.

He further adds, “What is lacking here, is the technology integration into applications. Therefore, besides, being a developer, you need to know the application area too. In healthcare, for instance, there is a lack of doctors, technologies, and diagnosis apps. In fact, there are many more issues in healthcare. Can we combine all these properly for the AI purpose?”

Initially, among the tech startups, it was ecommerce which received the most traction and still remains the fastest growing sector. However, 2015 onwards, ecommerce has gone through a lot of consolidation phase or corrections. “I must say, the learnings from the consolidation is phenomenal. The market behaviour is changing.”

By and large, Indian product offerings are still based on old schooling. “Yet, what excites me are the young entrepreneurs who want to bring change at a faster pace. These young entrepreneurs are now bringing more value to the market today. The ecosystem is building. A lot of VCs are now looking for long-term strategic investments in spite of initial bumps. This helps cultivate the ecosystem. The return will be seen decades later.”

An IIT Chennai and the University of Virginia Alumnus, Ramesh worked for many companies including HP and Adaptive Corporation before he decided to be a founding member at ZeitNet in 1994. Ramesh led an engineering team which made high-speed LAN products. Later he joined which was acquired by Cisco Systems in 1998 for $157 Mn and as a result of the acquisition, Ramesh became the Director of the Wireless Access Business Unit at Cisco Systems. Thereafter, he worked with Airgo Networks (acquired by Qualcomm), FireEye in various leading capacities. In 2007, he joined Artiman, as MD, Artiman Ventures (India).

Speaking of learnings from his professional and entrepreneurial journey, Ramesh states, “Of course, raising money is the biggest thing that you have to do; but you will have to develop the technology, build a startup, and its market first. Every startup has its journey. However, the common factor among them is the pain and suffering.”

He further adds, “Right from building a team, to staying focused, keeping the team together and motivated, then keeping customers and investors happy regardless of the supply chain or other delays; everything, I have learned from my own experience.”

“For a startup launch, market timing is very crucial.”

Of course, the Valley helped him a lot in achieving what he is today. He opines, “The Valley provides a better ecosystem for startups to succeed. There, finding the right people with right strategies and right business opportunities is easier. The Valley helped me to grow and learn remarkably. The general idea among Valley entrepreneurs is to build a big company. Thus, the founders do share the success with everyone else in the company.”

In contrast to the Valley, “In India, it is still a nice cash business, but you soon lose control over the company.”

On a concluding remark, speaking of solving the startups and investors’ dilemma in the existing startup ecosystem, Ramesh Radhakrishnan points out that most of the Indian startups are usually feature or app-based models. Such business models are easy to copy. The very first thing VC firm Artiman Ventures looks into is whether the startups have got the competitive barriers or not. Whether the idea or technology is patented or not. Secondly, the idea must enable a platform at large, rather than providing a short-term solution. Short-term features are easily integratable by other existing players in the field.