“The aim of an idea is propagation.”

But what if it is never able to go around the obstacles of hesitation, hierarchy, bureaucracy and bias to be heard and then acted upon effectively? It is these walls which 18 year old Tanmaya Jain, wanted to break down. The general concept of college was a pretty big culture shock for 18 year old Tanmaya, where new ideas were often known to be ignored, shot down or simply lost in the ocean among hundreds of others. It set him thinking that this was a pain point with organizations as well where many useful ideas from employees die an unnatural death under the burden of hierarchy and bureaucracy. He wondered if there could be an effective way to channel these ideas so that they could be acted upon in due time?

His belief was further reinforced when Marissa Mayer, in the first year of joining Yahoo as CEO, aimed at eradicating PB&J (poisonous processes, useless bureaucracies and jams) by using an in-house feedback platform. The PB&J experiment helped her in solving 1000 problems, directly doubling the stock price in just 1 year. This success story further validated Tanmaya’s beliefs about the efficacy of such a tool and thus was born inFeedo in May 2013 – an anonymous feedback platform that connects every single employee in a company to allow them to share ideas and solve problems, together. 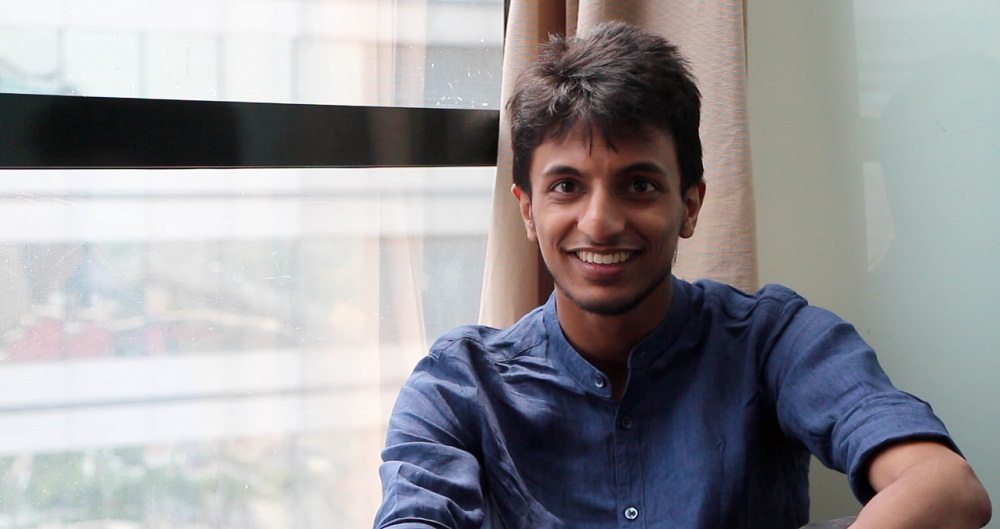 Tanmaya first decided to run a pilot with schools or colleges to begin with, with the hopes of taking it to corporates where it was a bigger problem and had a tangible output attached. However as luck would have it, his first pilot at SRCC bombed on the first day! Though people came on board, but inFeedo failed to get much traction in terms of revenue. So after trying with one or two more colleges, inFeedo pivoted to target only corporates.

Securing a meeting with Groupon’s (now Nearbuy) CEO Ankur Warikoo proved fateful as Ankur much appreciated the whole concept and told Tanmaya midway in his presentation, “I want this product more than you want this sale!”  From thereon, inFeedo’s journey as a B2B enterprise startup whose mission is to help CEOs grow their companies without losing their culture and make their employees feel heard has been an exciting one.

The platform allows companies to harness their people power to drive bottom-up innovation, crowd solve key problems from teams across multiple locations, and collect anonymous feedback.  People can anonymously post ideas on the platform, which can be up voted by others. The management receives intimations about these ideas real time, can analyse them and review them as and when the idea needs to be executed.

Thus the platform enables founders/ CEOs to access the power of ideas of their employees which might have otherwise gotten lost in the ocean of the emails, slacks, forums, chats, notes, whiteboards and other priorities. The anonymity part ensures that people who are hesitant to come up with ideas can easily do so. Similarly employees are also able to demonstrate their reservoir of knowledge to their managers and contribute to ideating and leading the company towards growth. This in an organisation, inFeedo builds a strong binding network which solely puts work into picture. 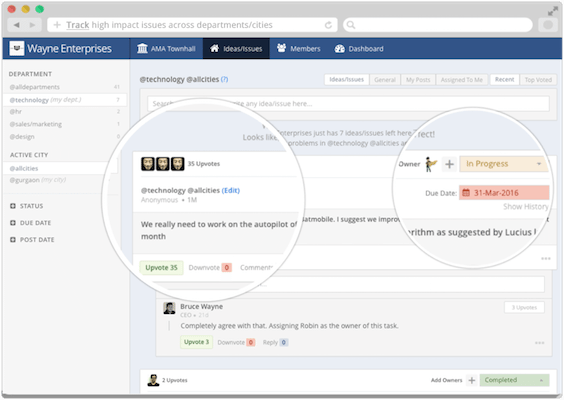 Infeedo targets tech enabled companies, with more than 100 employees, distributed over two or more locations, and thus making the perfect cut in need of a binding factor. After its commercial launch in end of 2014, it acquired Nearbuy (earlier Groupon) as its first customer. MakeMyTrip, Knowlarity, PayU, Cactus Global, and Faasos are some of its clients now, with its user base touch over 5000+ users. 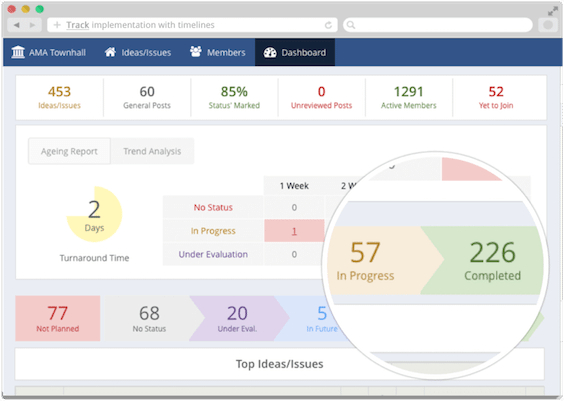 The startup’s next six month’s plan is to raise this number to 10K and paid users in the international market, with an integration heavy platform that’s almost invisible in terms of its adoption/fitment into the people oriented companies out there. As per Tanmaya, “The ultimate goal is that, when an idea strikes anybody, anytime, anywhere it should always land up in inFeedo as a habit for it to be channelised effectively.”

Being a B2B product, the startup monetises through the subscription model, charging for a per user per month fee, which is billed quarterly. Currently, it offers two packages – one starting at INR 80 per user which does not include premium support, while the INR 120 per user package includes premium support which includes a dedicated Customer Relationship Manager and accommodates customisation requests if any.

The nine member team is based out of Gurgaon and is currently bootstrapped with seed funding provided by Tanmaya’s father Palash Jain, who was the head of Google India Operations. Right now, inFeedo is focussing less on raising funds but more on entering into partnerships with HR consultants and B2B HR companies having a multi-national presence to break into international markets.

Infeedo’s main competition comes from none other than Microsoft’s billion dollar enterprise social network Yammer.  Yammer is a private social network that helps employees collaborate across departments, locations, and business apps. Though it is a social tool used widely across 200,000 offices and companies for sharing but it’s not for actionable ideation only. It helps to bind people in an organisation together but there’s no tangible output to that sharing. Neither would the founder or the CEO get anything tangible out of it. Adds Tanmaya, “No matter how big a competition Microsoft’s Billion Dollar Enterprise Social Network Yammer was, this was a big yet highly specific problem in the market that was still waiting to be solved. My mission was to help CEOs grow their companies without losing their culture and make their employees feel heard, with an internal feedback platform.”

Then there is Slack which is a superb “internal communication platform” allowing easy integrations with other tools but is not specifically used work oriented stuff only. It is this gap which inFeedo aims to fill, by becoming an enterprise employee feedback platform with that being its only one niche focus area. Rather than simply being an enterprise social network, it aims to be a dedicated platform to help organisations act on real time employee feedback and suggestions to continuously improve culture, innovate, and grow. What it wants to do away with is those quarterly surveys, suggestion boxes, corridor conversations, unstructured town-halls and half-built unused in-house tools.

In the pipeline are plans to add more features which will resonate with the employee engagement aspect such as rewards, recognitions.  A mobile app will also be launched soon to make idea generation, problem solving, and collaboration possible anytime, anywhere.

This February, Microsoft began to activate Yammer for all its eligible Office 365 business customers starting today, in what’s a major push for the enterprise social networking service. While inFeedo’s plans may be ambitious and its product differentiated, yet it still has a pretty uphill road ahead as far as scaling and competing with biggies like Yammer. Despite being a nice HR enterprise product, what can work in its favour is that being a SaaS product, it will be easier for it to go global as is demonstrated by the success of many Indian SaaS companies who have made it big outside India. It will be interesting to see how successful is inFeedo in replacing the traditional quarterly surveys, suggestion boxes, and town-halls to usher in a more tangible method of fostering the culture of ideating and problem solving in organisations.