“Traditional institutions like banks are not able to underwrite loans for SMBs because of the rigid criteria structures. Other startups are making an attempt at filling this gap in lending, but they have a one-size fits all approach for all SMBs and customers. The data is missing,” begins Alok Mittal founder of fintech startup Indifi.

Alok is not new to the world of Indian startups – he had earlier sold his e-hiring company JobsAhead for about $6.3 Mn (INR 40 Cr). And he is the former India head of VC firm Canaan Partners.

The legacy problem of banks being unable to finance capital loans for small-time business owners due to lack of proper paperwork is a familiar one. For instance, a working capital loan in a national bank requires submitting IT returns for three years and accreditation of business etc. In a largely digital world, this process is tedious, time-consuming. It does not come with a sure-fire guarantee of having the approved loan, for the same reason as the one-size-fits-all approach of fintech startups.

“At Indifi, our approach differs on two fronts. Number one, we work on solving capital lending for SMBs on a segment by segment basis. Secondly, we look to leverage the maximum amount of data to provide for accuracy when it comes to lending.” 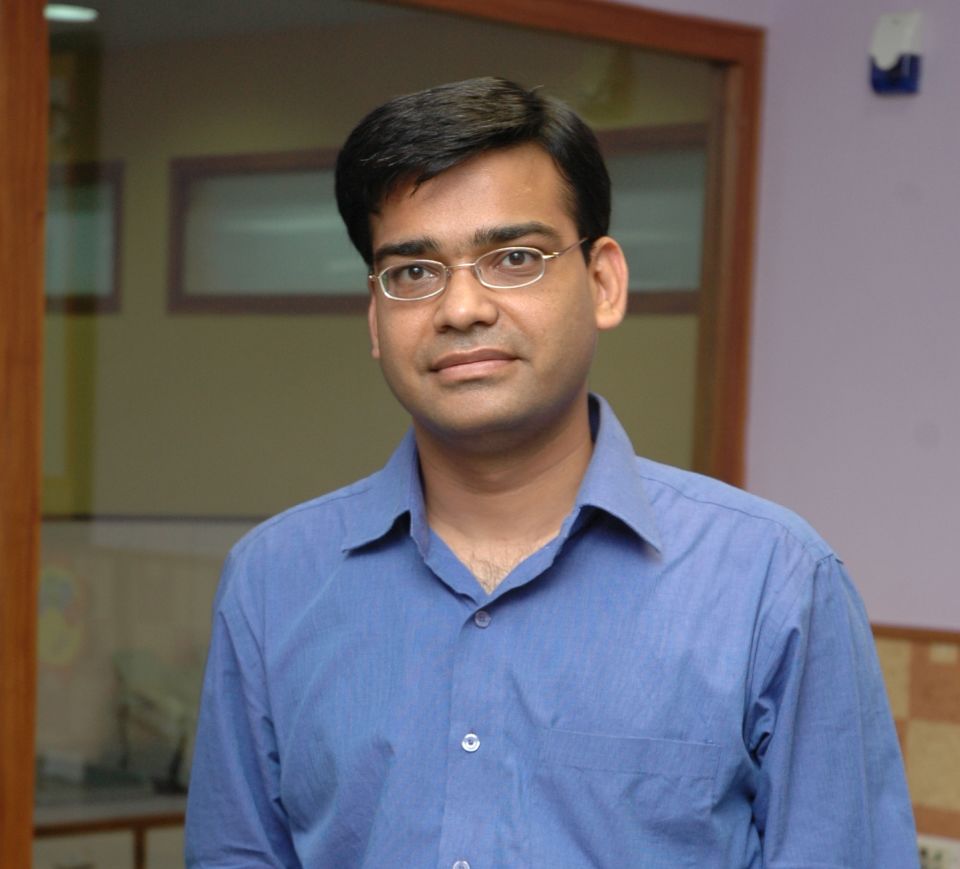 Alok Mittal along with Siddharth Mahanot, and Sundeep Sahi launched Indifi in June 2015 for the travel and hotel segments of SMBs. The idea was simple –  solving the problem of capital lending for the millions of the fragmented SMB sector in India.

Within two years of launch, the company has expanded its footprints and disbursed loans across 150 cities in India, to the tune of $12.4 Mn (INR 80 Cr).

Indifi deals with SMBs in two verticals – travel agencies or OTAs and the HoReCa segment (Hotels, Restaurants, and Cafes). When prompted why they chose to focus on these two segments, Alok shares that the market opportunity in capital lending for travel agencies is about $400 Bn (according to a report by FHM). And the core reason for this is the lack of intensive data available for these agencies.

Most established lenders have blacklisted small-time travel agencies because of the way they conduct business – agencies buy and sell tickets in bulk, charging a small commission for the same. But the transactions do not show in their books, leading to a discrepancy in bookkeeping. These businesses have been traditionally considered “volatile” and “fly-by-the-night.” Volatile, because the volume of business is varied and so is income based on the same.

“It was this perception that led to the travel segment losing out on a good credit assessment. We realised then that the problem that existed was not that they were a bad risk, but that there was no proper way to measure their volume of business – transaction and ticket-wise.” And so, that is exactly where Indifi stepped in and created a bridge between the borrowers in the segment and the lenders. 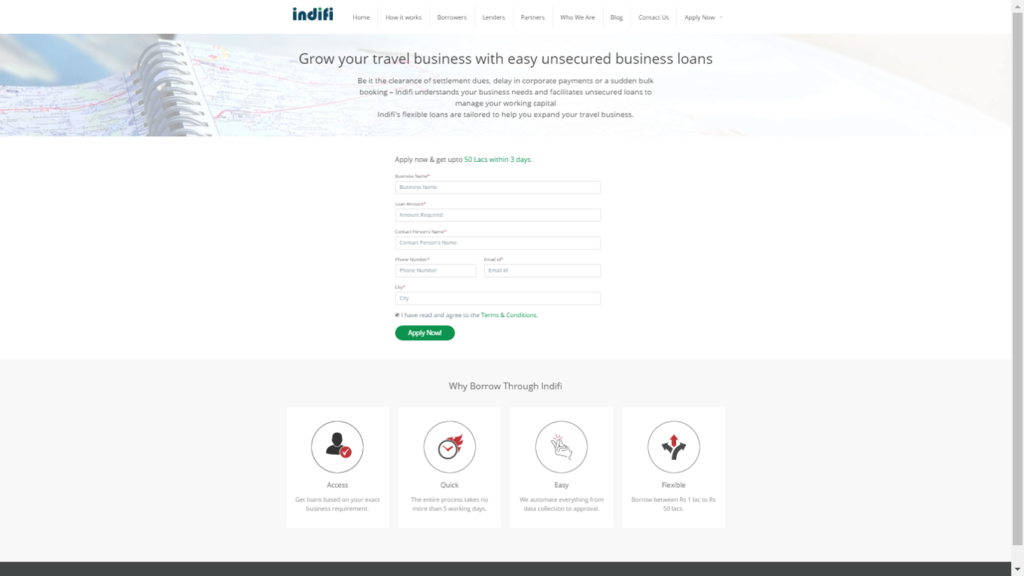 They created this by bridge by partnering up with firms that were tracking these ticket transactions. They created data partnerships by inviting them to come onboard. This also proved to be an initial obstacle because data-sharing is sensitive and can be misused too.

But once companies such as MakeMyTrip (a knowledge partner with Indifi) realised that the better credit for the borrowers would mean more volume of business from their end (more capital would lead to larger transactions),they were more receptive to the idea. The data partner would assess the stability or volatility of the borrower travel agency by parsing various data points as required. This was also a marketing strategy adopted by the company to onboard borrowers.

The Indifi team then built proprietary credit algorithms to automate this process to signal risk assessments. The pilot programme took off with MakeMyTrip and ShopClues in 2015 after six months of research and building out the platform and the first lender to come onboard was NBFC Edelweiss Capital.

Alok reveals that in the initial six months, they were able to onboard about 200 borrowers. But now they have processed about 2,000 loans one-third of which comes from the travel segment. 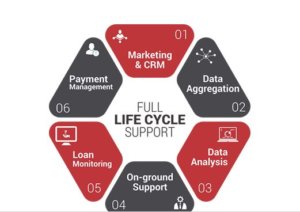 The Indifi Model For Disbursing Loans

Indifi followed the same process when it came to entering the next segment their platform caters to – HoReCa. For hotels, the capital requirements were different than those of the travel vertical. For one, their bookkeeping is a lot more sound with transactions occurring on a regular basis (daily/monthly) and tracking was not the pain point.

Hotels need larger capital in order to conduct renovations or overhaul the space – in the operations and hiring space, basically. So, the lending offering to hotels is different than what is provided for travel agencies, who need shorter-term loans in order to maintain their line of credit. For hotels, the loan period is of longer term – one to two years with a facility to use up the requested loan amount in installments.

How The Platform Works

Once a borrower (platform user) submits their KYC documents along with the required bank statements, they will receive an in-principle sanction within 24 hours. Strength, risk and volatility of the borrower is assessed by the proprietary algorithm and tracked data. The loan term is then created, depending on the need of the borrower versus what is viable for the platform.

The Turnaround Time (TAT) for the same used to take 3-4 days – from the user uploading documents and requesting a loan to signing the agreement and receiving the money. As per Alok, the TAT has now been reduced to same-day loans with the use of India stack – (PAN Card+ Aadhaar+ KYC).

The newest vertical that Indifi is tackling, ecommerce, has the same short-term working capital requirements as the travel agencies and so the same rules apply. The data partners for etailers are Pine Labs and First Date They provide credit card terminals to the retailers and help in tracking the volume of business in order to assess stability and risk.

Past And Current Challenges Faced By Indifi In The Fintech Arena

Indifi has been one of those startups that was able to raise funding when the platform was still being launched. It raised an undisclosed amount in September 2015 from Accel Partners and Elevar Equity and a Series B round of $10 Mn later on led by Omidyar Network. But, as every entrepreneur worth his salt knows, funding is just one part of the juggernaut and there are core challenges that still need to be tackled for a startup to scale in scope.

“Like most untried businesses, our first challenge, something we struggle with even now is to prove the business model – both in terms of users and revenue,” Alok says. “But being in the fintech business, our second major challenge is to convince banks and NBFCs to not look at SMBs as one huge sector, but instead to focus on each segment and solve for them.”

The launch of the product and the steady uptick of borrowers meant that the team could approach larger banks and show viability. This resulted in in banks such as YES Bank, RBL and IDFC coming onboard as lenders. On the NBFC front, IndiaInfoline, Capital First, Aditya Birla Finance are the partners along with aforementioned Edelweiss.

The average ticket size is INR 5 Lakhs for a period of 12 months, with the lien being valid for a year and the loan amount available for disbursement as per the borrower’s needs.

The other challenge that Alok mentions was getting the data partners to come onboard, especially for the very first vertical – travel companies. “For the travel data partners, the way we explained it to them was that the more sound the data, the more credit the agencies could avail of, which meant that the capital would be used primarily to buy more tickets, ensuring more business.”

Perhaps, it is this level of transparency and segment-wise approach that has accounted for the 15%-20% M-o-M growth for Indifi in the last year, as well as 10x growth on their initial user base, as verified by the number of loans disbursed – 2,000.

Indifi’s current challenges include tackling the newest vertical they have entered – used car dealership financing. As well as identifying future verticals which will benefit from the Indifi platform with focussing on scale and scope of the same.

Fintech startups such as Capital Float, Lendingkart (which recently raised $7.7 Mn from YES Bank), Rubique, CrediMantri, Monexo are competition for Indifi. As are their own lending partners – the banks and NBFCs, all wanting a share of the multibillion dollar fintech pie. But Alok demurs as he says, “Online lending is a very confusing space and so the notion of competition and collaboration is all mixed up. Our lenders are also our competitors in a way, because we are all looking to give loans to the SMBs. But NBFCs, banks and fintech platforms all form part of the ecosystem and given the size of this market, we are looking to address the pain point by solving for different target segments.”

This is the roadmap that the 60-member Indifi team is choosing to follow – to perfect execution while following the same template ofrendering more data partnerships, expanding to more cities and onboarding more borrowers and more lenders.

The fintech vertical, by its very nature of involving finance and technology, is one of the hottest sectors in India. It currently accounts for a $1.2 Bn market, that is expected to double up to $2.4 Bn by 2020, according to a report by MAPE Advisory Group and consulting firm MXV. The November 8 demonetisation drive has also spiked the number of users across different fintech niches – such as P2P transactions, online wallets, wealth management and more. Fintech looks to leverage upon existing needs and solve for very real pain points – that of turning every single transaction digital, safely.

In the field of capital lending, companies such as Indifi, Capital Float, Lendingkart and more have tapped into the burgeoning SMB segment of India, which has further been refined by Indifi’s vertical-facing approach. Through its business model that focusses on each of these verticals and organises capital lending for the truncated needs of its borrowers, Indifi has been able to achieve growth in a short period of time. But, the fintech market is fast-becoming oversaturated with players talking to and over one another when reaching the end-consumer.

How Indifi manages to disburse loans at scale, all across the country, while maintaining its position of paying attention to detail will decide the progression of its graph in the fintech lending space.