When one thinks of HR, the first thing that comes to mind is payroll processing, maintaining a record book on leaves and attendance, managing travel expenses, performance appraisals, and such administrative functions – far removed from the business side of things. So when Prasad Rajappan – who had started an HR consulting firm Cnergyis in Mumbai in 2006 – thought of launching a cloud platform with the idea of covering the entire spectrum from hire-to-retire, he did not want to simply address it from an HR automation perspective for the HR team.

Rather, his motivation was a notch higher- “Can we make a HR cloud platform from the perspective of a CEO rather than the HR team alone. Can I make it for the business? Can the platform directly impact the EBITDA margin? Can I impact the business outcome? Can I look at people engagement because that was the need of the hour?”

Thus, ZingHR was born in 2014 – a cloud-based human capital management (HCM) solution covering the entire spectrum from hire-to-retire or an end-to-end HCM solution with the focus on small and medium enterprises. 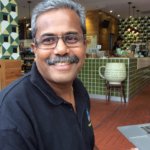 Prasad adds, “Our focus was less on automation but more on winning HR practices. We wanted to look at business processes such as hiring or workforce planning or performance management from the CEO’s lens rather than a HR perspective.”

Added to that, ZingHR wanted to give customers the simplicity of social media on an HCM automation app – thus allowing them to do HR management right from their mobile.

ZingHR’s premise is simple – it wants to narrow down the communication gap from the company to the last level employee or in other terms, the transmission loss. Explains Prasad,

“We believe HR is an area where there is a gap between the event happening and getting reported into the system and an action happening. So we cut that process by enabling that whatever the management wants, it is directly available on the mobile of the employee. From the employee’s perspective, we have made them connected.”

So for instance, whatever time the employees were spending earlier on marking attendance, has been taken care of by the platform. Now attendance gets automatically marked when an employee logs into the CRM. Also, if he needs any help or wants to chat with the manager, there’s a social way of connection through the platform itself.

Adds Prasad, “Hence the message that goes out to the employee is, I trust you. You go ahead and do the business; I will take care of you. We are here to hear your woes and address your problems and issues. Moral of the employee goes up, management starts to get results in real-time, and they are able to avoid leakages in the system. The best part of the system is it not implemented just for a division, it is implemented across the company”. 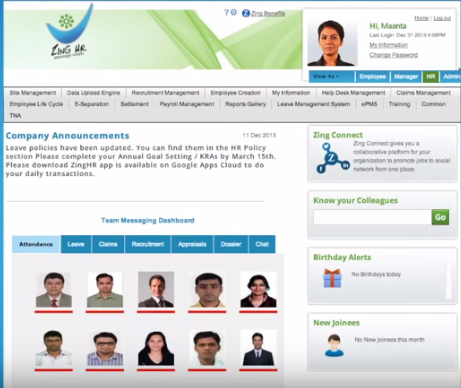 In the last one and a half years, ZingHR’s scalable modules have attracted customers of all sizes – from companies with 50 to 500 employees who want everything in real-time on mobile as well as those with more than 1,000 employees who have experimented with other ERPs before as well.

Since the startup positions itself as a horizontal player, it has clients ranging from BFSI to retail to pharma to manufacturing. Recently, it has also signed an educational institute which has 1,000 outlets with 30,000 people and is making a transition from a manual system to mobile.

Prasad attributes this shift to two things – one to the mobility aspect as it provides mobile-first apps on hiring and appraisals. And secondly, to the initiatives it’s doing on machine learning with Microsoft in terms of talent acquisition and retention.

Adding That Extra Zing With Microsoft

When ZingHR made it to the Microsoft Ventures’ 2014 summer batch of its accelerator programme in India, Prasad thought the partnership will just be to push the technology piece. However, he was surprised that their entire approach was not just to look from the technology perspective but also from funding, marketing, from a go-to-market, from positioning perspective.

ZingHR realized that by leveraging cloud, they could address all the demands of their clients. They could provide solutions and services that were highly flexible, scalable, mobile, and economical. So when a partnership with a major cloud provider in the market proved fruitless with a lack of support and guidance, it moved to Microsoft’s Azure cloud platform in 2014.

The move has helped ZingHR in more than one way. Microsoft’s Power BI, Advanced Analytics, and machine learning enables that cutting edge technology made its way to ZingHR. It also made sure there was a technology team embedded in the startup for helping it to implement the product.

So essentially, what Microsoft brought to the table was way more than just the cloud. It was a platform that could complement ZingHR’s strengths in many ways including mentorship and technology – driving 5X growth in customers – from 20 to 100 in just a year. 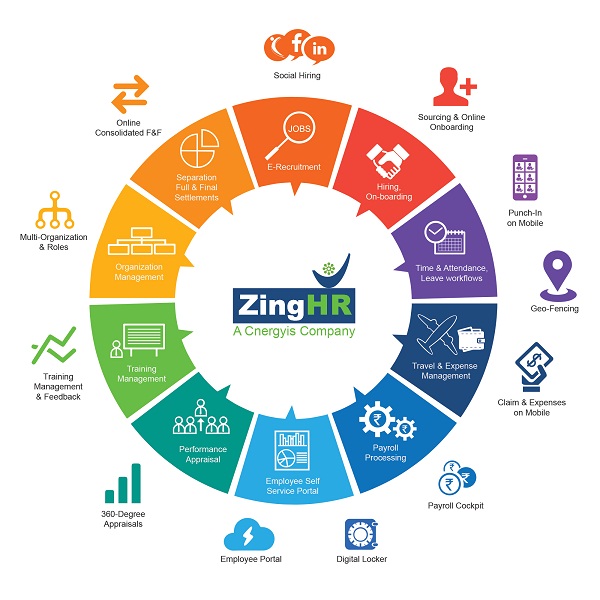 On top of that, the accelerator opened about 150 large enterprises, about 3,000 midsized enterprises to ZingHR and helping strategically with email marketing, strategic events, webinars, round table conferences with HR people and CIOs, and brand building – something which the startup lacked. They provided a huge exposure to customers, taking the help of some 50 account managers to push ZingHR and have gone all out to promote ZingHR almost as a default HR platform of Microsoft.

Additionally, it’s the credibility that came with Microsoft’s name that has helped. Explains Prasad, “We were talking to a large telco company, which had concerns about security. So the Microsoft security team talked to them and assured them that it is powered by the Microsoft Azure India data centre. Hence, credibility building has happened from their side.”

5 Lakh Employee Records On The Platform And Counting!

The startup offers its product as pure SaaS-based and only on the cloud. Customers are charged on a per month/per employee basis. The basic plan starts for as low as 50 employees at $108(INR 7,250) per month while the Turbo plan on the higher end, which is an end-to-end plan including training, hiring, travel, etc., starts at $288 (INR 19,250) per month. So for an organisation with 1,000 employees, it goes to $896 (INR 60, 000) per month, effectively translating to less than a dollar per employee per month.

Currently the startup is closing about eight customers a day, which it wants to push to an ambitious 100 customers per day by the financial year end. Prasad claims to have over 5 Lakh employee records on the platform, a figure he is looking to leapfrog to 50 Lakhs in the next 30 months. He adds, “The next year we want to grow to 10x. Right now, the Indian market constitutes more than 95%, but after three years it will be 60% in terms of numbers and 40% would be overseas. In terms of revenue, however, it will be the reverse – with almost 60% coming from abroad.”

Prasad’s confidence stems from the fact that with the help of Microsoft, it has now expanded to the Middle East, Singapore, and Australia. From January 2016 onwards, the startup is aiming to enter the North American market. He states, “Our customer base doubled from last year, and by March 2017, we will grow by almost 3x.  Once we go abroad especially to North America, in January, we are hoping to see a real shift in profiles and numbers.”

A shift in numbers is also expected in the team size by next year. Currently there are close to 85 people, and that number is expected to grow to 150 over the next one year. However Prasad feels that it won’t see a huge growth in the number of people as the technology it is building does not require too many people.

The startup which had raised $1 Mn in funding from Accel Partners and Triton last December is looking for another $8-$10 Mn to fuel its expansionary plans. It also counts  Mumbai Angels as backers.

The Other HR Enterprise Players

There are many other employee management solutions providers in the space such as Jombay, Sapience, Wooqer, CoCubes, HiringMonk, Recruiterbox, among other enterprise-first management solutions. Pune-based talent assessment and analytics platform, Jombay, managed to raise an undisclosed amount of funding from VentureWorks India last year. A year prior to that, five –year-old, and also Pune based Sapience Analytics had raised $6.7 Mn( INR 45 Cr) in funding led by Orios Venture Partners.

Prasad however feels that despite the competition, ZingHR will be able to stay ahead of the curve because of its focus on the business outcome and cutting edge technology. His confidence stems from closing the Intelnet account( April 2016, 50K employees), and acquiring customers such as HDFC bank, Kotak bank, CRISIL, along with startups such as Cloudcherry and Capillary Technologies. Added to that, is the fact that even government and semi-government organisations are now showing interest in platforms like ZingHR.

He also feels that the next one and half years will also see aggregation happening in the sector. Additionally, a lot of analytics and AI will get embedded into the HR practice – be it bots, or machine learning. He adds, “They will become an integral part of any of those HR thought processes. And HR as a process will get seamlessly integrated with other processes; it will no longer remain as a department.”

As per Prasad, in India, nearly 2.7 Cr people fall in the addressable target market for ZingHR’s kind of business. From the organized sector perspective, hardly 5-6% of it has been tapped.  Hence, there’s a huge potential for a complete end-to-end employee lifecycle human resource software solutions to fit the custom needs of a company.

Today even startups with 20-30 people want complete HR solutions. While there is no doubt that ZingHR’s vast plethora of offerings – right from hire-to-retire and easy availability on the cloud are attractive, yet it will have to compete against many enterprise-first management solutions along with other new age technology employee management solutions.