With an average ticket size of INR 20K, NIRA claims to have over 2 Mn registered users for its short-term low-value loans

Cutting back on 90% of its lending activities, NIRA continued to serve a sliver of the market to maintain competitive advantage and learn through the crisis period

The company says while loan recoveries dropped to 75% in April, the situation has considerably improved for the lending market in recent weeks

In India’s fintech revolution and the multi-trillion-dollar market opportunity, the lending market equations are fast changing. While the credit demand in India is projected to be worth $1.41 Tn by 2022, as per DataLabs by Inc42+ estimates, the Covid-19 crisis is said to be an unprecedented boost to the lending space in India.

But while the opportunity is huge and the investor community is expecting fintech to be one of the beneficiaries of Covid-19, the onground reality for lending companies has been a tough sight— with the Reserve Bank of India moratorium putting a pause on loan recoveries and thus, new lending services.

However, one of the companies which claim to have continued steadily in disbursing and recovering loans is Bengaluru-based NIRA. Founded in 2017 by Rohit Sen and Nupur Gupta, NIRA offers small-ticket consumer loans, focused on lower-income groups in India’s middle class. The startup offers 3-month to 12-month loans with a credit line of minimum INR 5000 and maximum INR 1 Lakh. The company has an average ticket size of INR 20K and has over 2 Mn registered users, however, it didn’t specify the number and value of loans disbursed till date. 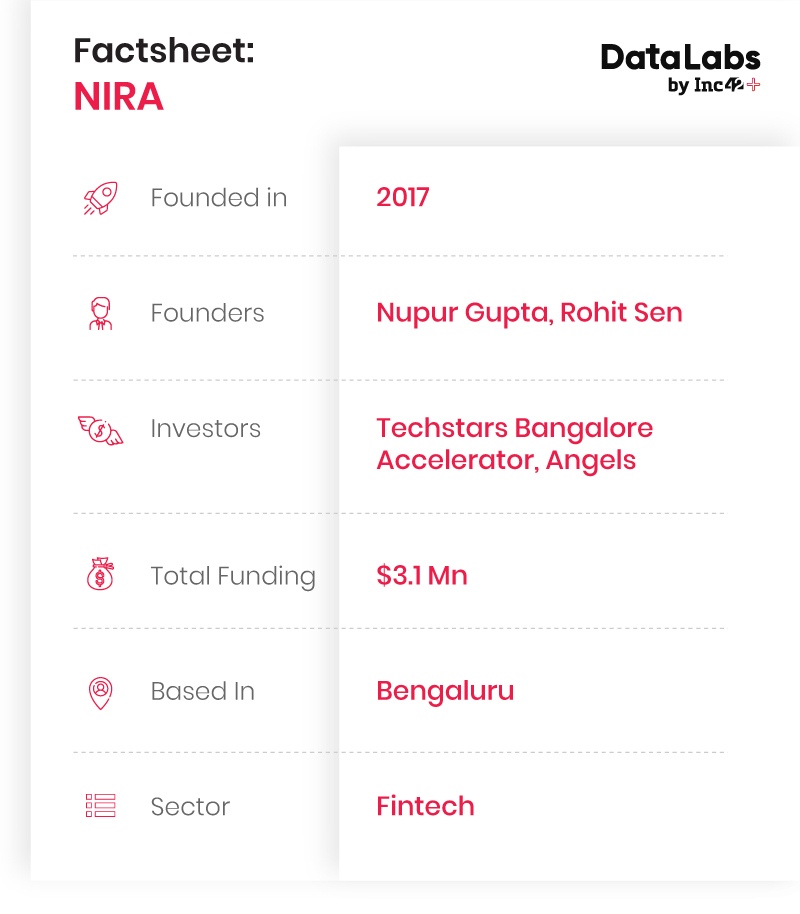 Talking to Inc42, Sen said that in September 2019 the company had finally found the product-market fit, after its journey at Techstars Bengaluru Accelerator, where they were guided to identify the right customers and take it forward accordingly.

The pandemic put a quick halt to all the momentum. The company had stopped 90% of its lending activities but continued to enable the remaining 10%, to keep the momentum going. Explaining the rationale behind this, he says that it is about having the pulse on the market.

He noted that if the company isn’t lending, it is missing out on the people applying and the performance of that loan. “So that 10% of lending, it allows us to see how we perform and in getting real-time information on how protectors are performing, which allows us then to know where to turn off the dials as we accelerate out of this crisis,” Sen said.

He concludes that it is about getting information, which allows the company to make smarter risk-decisions, which others won’t be able to access.

The Covid-19 impact was also very hard on the company, its biggest fall being April 2020. Pre-Covid-19, the company would typically collect 96% to 98% within the first 30 days of the due date. However, it saw a big drop in April, with the collection falling to 75%, but now it has recovered back into the 90s. He also noted that they have a low rate of loans going into moratorium.

Further, expanding on the company’s preparedness for the Covid-19 impact, he said the company had narrowed down its variable costs and has extended the runway for at least 12 months. This is also supported by the company’s timely fundraise which happened just before Covid-19 and was announced in April 2020 as $2.1 Mn Pre-Series A funding from angel investors.

Narrowing down on what actually helps the company’s loan-recovery process, Sen had multiple reasons. But understandably, it is the fundamental feature of NIRA’s financing model. The company is enabling online disbursal of low-value personal loans for medical emergencies, vehicle loans, education fees and marriage costs. Essentially, after the basic information, the in-principle approval would be shown on the app instantly once the application is completed. The final approval will be given as soon as all the documents are uploaded and collected in 2-48 hours.

After the final approval, the customer has to enable auto-debit under RBI’s e-NACH mandate, under which a lender can auto-debit the EMI payment at a fixed date. Only after this is enabled, the company allows the customer to draw requests on the credit line. Hence, the company is able to manage these loan recoveries too.

But given the pandemic, several fintech companies including NIRA’s competitors have been accused of harassing customers unable to repay their EMIs for unsecured loans which are not covered by the moratorium. From being harangued on phone calls to being threatened publicly with messages sent to their contact list, digital lending customers have alleged that such bullying is rampant as companies look to get their dues.

This is primarily because recoveries have become harder due to the extensive layoffs, job furloughs, pay cuts and loss of employment for gig workers and small businesses, who are the primary target audience for most digital lending companies in India.

Sen explains that NIRA starts off with follow-up messages via the app or email or SMS, followed by calls from the collections team. The company also tries to enable users’ to pay part of the loan too, depending on their condition.

With collections slowing down even among non-banking financial companies (NBFC), the flow of credit from institutional players, larger NBFCs and banks are expected to take a major hit. Even as some tech-enabled lending startups claim to have collection ratios, in many cases, borrowers are using the temporary relief provided by the Reserve Bank’s moratorium on term loan repayments.

In such a scenario, NIRA  is optimistic of gaining a bigger competitive edge during the next 18 months. With the belief that the damage done by Covid-19 on businesses can be managed in the long run, many are thinking about growing again. For lending startups, the belief is that if a startup has a clean balance sheet, owns or uses the right underwriting tech to scale and automate processes, the lending is a fantastic opportunity right now.

“It’s a great opportunity as while some players are clinging on, the ones with big books have a massive problem on their balance sheet to deal with. So that means the competitive environment is very favourable right now and I think it’ll be favourable for the next 18 months,” he added.