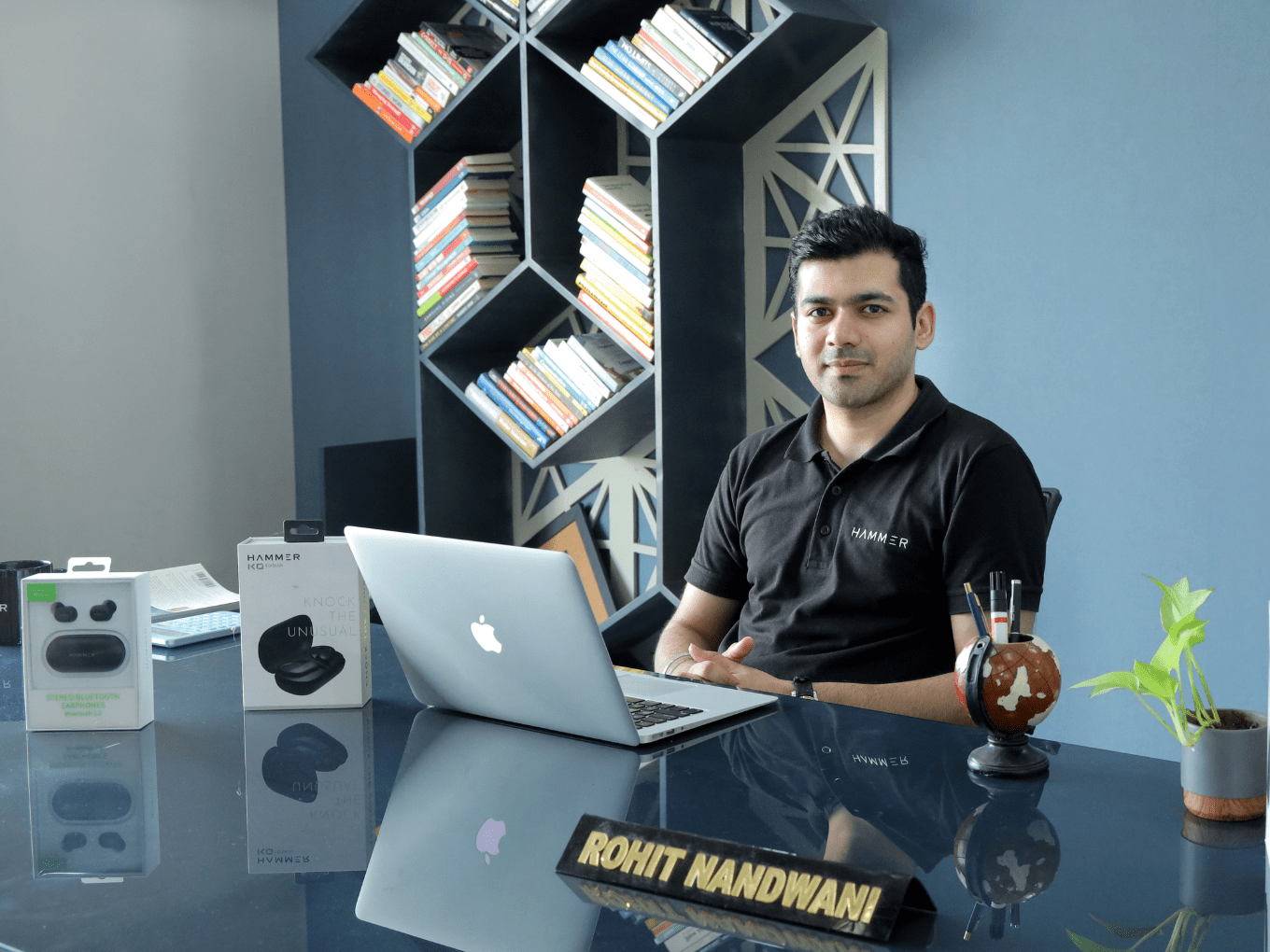 Wanting to tap into the rising wireless audio products with Samsung’s entry into the category, Rohit Nandwani launched HAMMER in January 2019

The brand started out with outsourcing its manufacturing but later acquired an 8,000 sq. ft. facility to reduce operational costs and scale its production

Move over, wired audio (and accessories). The world has gone wireless, throwing open lifetime opportunities for the likes of Rohit Nandwani. Panipat-based Nandwani set up his mobile accessory distribution business Ringtel Marketing in June 2016 and ran it online. But two years later, he had insider information that Samsung would ditch the 3.5 mm earphone jack and go wireless. (Samsung announced the same in August 2019).

Apple did it in 2016, but the Android market leader’s move to wireless audio indicated a big pivot as other Android brands were expected to follow suit. Besides, the Android OS holds around 71% market share worldwide and 96% in India, which means growing demand across an expansive market for newbies entering the space.

Keen to tap into this opportunity without further delay, Nandwani launched Hammer in January 2019, claimed to be India’s first athleisure wireless earbuds. To ensure quick resources, he put INR 30 Lakh into the venture, the money that his father had saved for his MBA.

Even then, he was late to the party as Delhi-based boAt, Gurugram-based Noise and Hyderabad-based MiVi were already operating in that space. Despite the competition, he was undaunted and further diversified the product line to offer wireless chargers, smartwatches and electric toothbrushes.

What Mattered Most: Price Bracket And The Rollout Gap

Nandwani’s idea for the direct-to-consumer (D2C) brand came from the observation that consumers looking for pocket-friendly products often frequented local electronics markets and searched for what’s new. This indicated a lack of organised players who would target low-budget customers. In fact, a large part of this demographic was underserved, and rollouts of affordable products were few and far between.

So, he decided to come out with a brand that would not focus on a rigid product timeframe like its competitors. Instead, he calls his products fast-moving consumer durables (FMCD) and focusses on increasing the category-agnostic basket of products. The brand releases a new product every three months to ensure multiple purchases in one go as well as sales from repeat customers.

To avoid product pileups, the company initially does a soft launch with a small percentage of the planned inventory up for sale. If these are sold within a specific period, the company begins large-scale manufacturing

“We operate in a particular niche. From a style perspective, we are an athleisure audio brand, which means our products are used on the go/activity purpose (such as smartwatches, wireless earphones) and also for relaxation. On the tech side, we manufacture only wireless devices. Building this niche helps us differentiate from the competition and fulfil the requirements of our target audience,” said Nandwani.

The growth of the global wearable technology market reaffirms this scope. According to a report by Markets and Markets, the wearable tech market size was estimated at $116.2 Bn in 2021 and is expected to reach $265.4 Bn by 2026, growing at a CAGR of 18%. 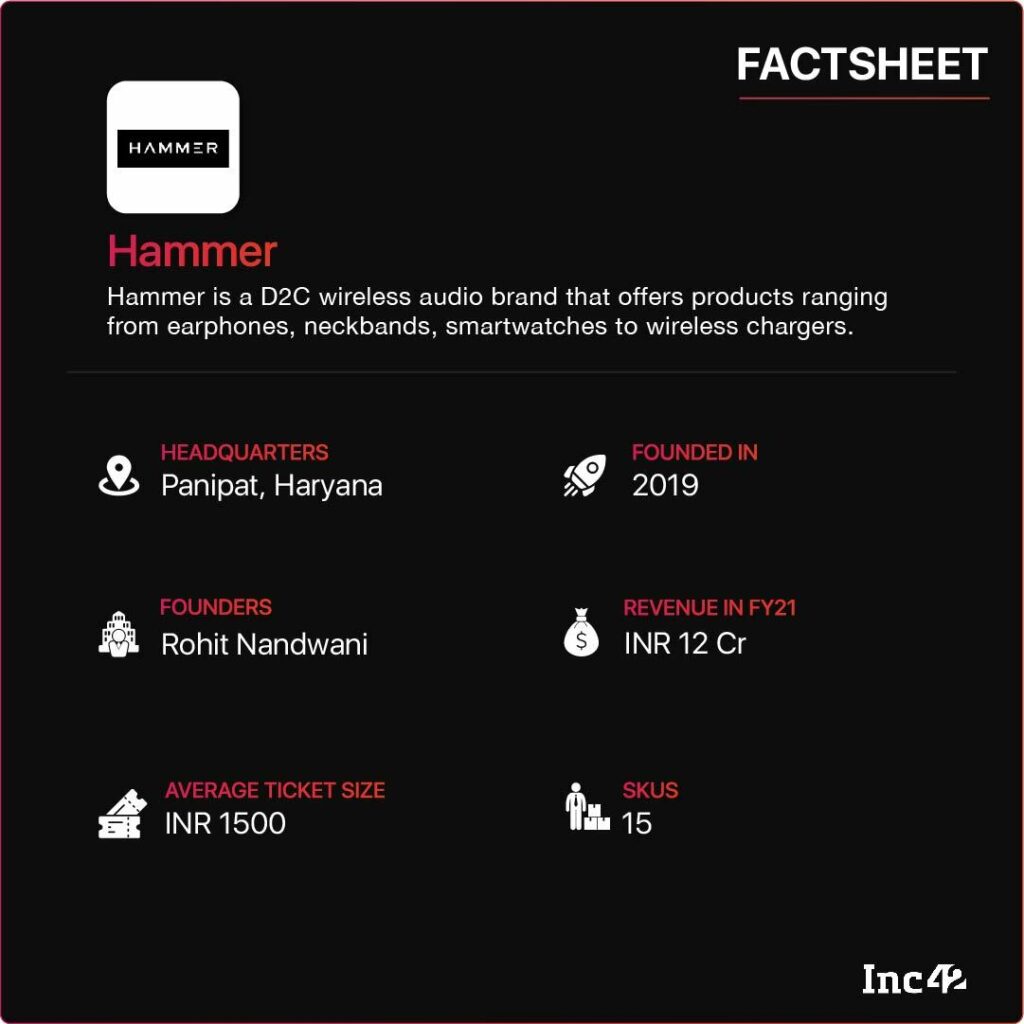 Of Teething Troubles And Quick Solutions

Although Nandwani is the sole founder of Hammer, his love for operations and processes led him to choose the designation of COO. The company is currently on the lookout to hire an experienced professional for the role of cofounder and CEO.

The challenges were many during the initial months as Nandwani could not start in-house manufacturing due to paucity of funds, lack of experience in product development and a very small team. He could not build a website either to create customer touchpoints. So much of these core operations were outsourced without compromising on product quality.

Hammer partnered with German audio company Sennheiser for contract manufacturing of its products. The company shared its own design templates and had them manufactured by the audio giant. On the retail end, it took the ecommerce route and listed its products on third-party marketplaces such as Amazon, Flipkart, Myntra, Nykaa and others.

The company started with earphones and other wireless audio accessories but quickly expanded its categories to wireless chargers, smartwatches and electric toothbrushes in sync with its diversified product growth strategy. Hammer has an SKU of 15 categories, and prices range between INR 1K and INR 4K, putting them in the mass-premium segment.

As it does not intend to exceed SKUs beyond 15 and constantly rolls out new products, older ones have a limited shelf life. According to Nandwani, this often pushes consumers to buy products faster as there is a timeline for availability.

The strategy has worked well, and the company clocked a revenue of INR 6 Cr in FY20. But when the Covid-19 lockdowns hit the business in March last year and operations were halted, the company decided to build a dedicated website for better customer engagement and greater sales. But with an inexperienced team in place, it faced new challenges.

Built on Shopify, Hammer’s website was launched in April 2020, and clocked 5-10k visitors per month. But when the lockdowns were lifted, a surge in demand saw the number of visitors skyrocket to more than 2 Lakh. Caught unprepared by the high online traffic, the website saw frequent downtimes, and the business suffered. But it allowed Nandwani to think on his feet, and he stepped up tech hiring to improve the website’s overall performance.

“It is still a learning process for us. Every new day comes with new challenges that we try to solve as best as we can. It is important to have these challenges to learn and grow,” he said.

The founder-COO’s process-oriented thinking and problem-solving skills did pay off, and in FY21, the company recorded 100% YoY growth by clocking INR 12 Cr in revenue.

The next goal for Nandwani was to reduce long-term operational costs by assembling the products independently. The company started its assembly-line operations in February 2021 after purchasing an 8,000 sq. ft facility in Panipat. Hammer has already completed seven-eight production cycles.

“Beginning our assembly line is a natural evolution. It also makes sense logistically as close to 50-60% of the components used in our products are already manufactured in India. We only import certain chipsets from Taiwan,” said Nandwani.

After the company began its own manufacturing, it stopped its contract manufacturing from Sennheiser, achieving its independent production.

It was easier said than done. Assembling products, much like running a website, was uncharted territory for the athleisure company. Due to many technicalities associated with manufacturing, in its initial months, the company struggled in bringing both the speed and quality up to the mark. Quick hiring came to the rescue again as the D2C brand brought in five sound engineers and a product manager to optimise its production processes.

As of now, Hammer’s assembly line has an overall production capacity of 10-12K units per month. It has also started manufacturing LED bulbs for Philips. The company has recently purchased another manufacturing unit to further scale up its production.

A journey enriched by learning curves has helped Hammer make some unique and not-so-unique branding decisions. For starters, the athleisure brand has partnered with an Israel-based data analytics firm to understand customer behaviour on its website and track the drop-off points before prospects reach the shopping cart. The data is also used to create customer profiles and understand the requirements of its target demographic. Together, these measures have helped the company improve its conversions by 2X.

Then again, after some hard-hitting analysis, it made a bold choice and left the popular product platform Instagram from its marketing budget in April this year. The decision was taken after paid marketing campaigns on Instagram gave a below 1% user engagement rate. The brand has also strayed away from influencer marketing due to a lack of transparency in engagement and conversions.

According to Nandwani, Snapchat, LinkedIn and YouTube Shorts (the Google-owned streaming giant’s short video format) have worked best for the brand. The company claims to clock an average of 8,000 orders per month. Out of these, 20% are generated via its website and 70% through marketplaces. The remaining 10% come from offline channels.

The founder thinks Hammer is yet to find the product-market fit, and rigorous data analytics will ensure that by FY22. It plans to raise the first round of funding in 12-15 months and scale aggressively afterwards. The brand is also targeting a revenue goal of INR 40 Cr by FY24.