Since 2014, hospitality startup goSTOPS has catered to more than 5 lakh guests

The startup raised $2 Mn in two funding rounds during the pandemic, which saw participation from marquee investors including The Chennai Angels, the Indian Angel Networks, Yuj Ventures, Mumbai Angels and many more

The carefree and spirited young travellers (or those young at heart) are always on the lookout for adventures. But travelling has become more expensive over the years, and this can easily be a deal-breaker when young people with limited resources plan their vacations. The only other option is ‘slumming’ it out, staying at small, dingy places lacking hygiene and security.

Pallavi Agarwal (cofounder and CEO of goSTOPS) faced the same ordeal during her college days. Travelling meant a lot to her, but she and her friends often struggled to find decent accommodation with standard amenities. But things changed when Agarwal and her husband, Pankaj Parwanda, landed in Salzburg (Austria) in 2012. There they found a string of backpacker hostels, low-cost and dorm-style establishments combining optimal functionality with maximum comfort.

Agarwal loved the vibrant environment of these hostels, the way people from different backgrounds and cultures sat together, shared their experiences and enjoyed the camaraderie. Of course, shared accommodation was not new even in India, but Agarwal knew that mere affordability without amenities would not attract people for long. This led to an idea as she wanted to transform the travel experience of young people at home and offer safety and comfort besides affordability.

She shared the vision with her husband, and once the couple got back from their trip, she quit her job as a consumer behaviour analyst and started working on the concept. After dabbling with the idea for months, she opened the first goSTOPS  hostel in Varanasi in 2014.

The startup currently runs 32 backpacker hostels across 29 travel destinations including  Rishikesh, Mussoorie, Manali, New Delhi, Agra, Goa, Coorg and many more. It has already served more than 5 Lakh customers and increased its bed supply 6x during the pandemic despite Covid challenges, it claimed.

The Making Of A Holiday Trend

The decision to set up the startup’s first establishment in Varanasi was a strategic move, said Parwanda, cofounder and Chief Strategy Officer at goSTOPS. “This iconic city sees an influx of foreign and domestic tourists throughout the year, which means a big opportunity for us. But at the time, foreign travellers were more conversant with the backpacking concept, and we had to depend a lot on them initially,” he recalled.

Nearly 90% of the guests were foreigners in 2014, but the percentage of domestic travellers shot up by 2018. A year later, around 85% of the guests were Indians. Parwanda credited the startup’s pocket-friendly pricing, hygienic living spaces and social and collaborative environment for this business boom.

The demographic dividend also worked in the startup’s favour. According to the Glance Spotlight Travel Report 2021, young people are eager travellers, and 56% in the 18-30 age group actively plan trips. As India boasts a young population, this has propelled the demand for budget-friendly but ‘top category’ hostels in recent years. So, it is not surprising that a host of startups, including goSTOPS, Zostel, Backpacker Panda, Roadhouse and more, aim to generate satisfactory but budget-friendly overnight stays for modern travellers.

Considering the price point in mind, goSTOPS charges INR 400-500 per day per bed, which is less costly than a trip to Starbucks. Like any other hostel, it offers amenities such as 24×7 cafés (run by goSTOPS), laundry service, secure lockers, free Wi-Fi, bonfire celebrations, sightseeing and more. Also, the startup’s target audience includes tech-savvy and digital native Gen Z and millennial users who practically live on social media. So, creating a buzz around the brand had been a cakewalk, said Parwanda. 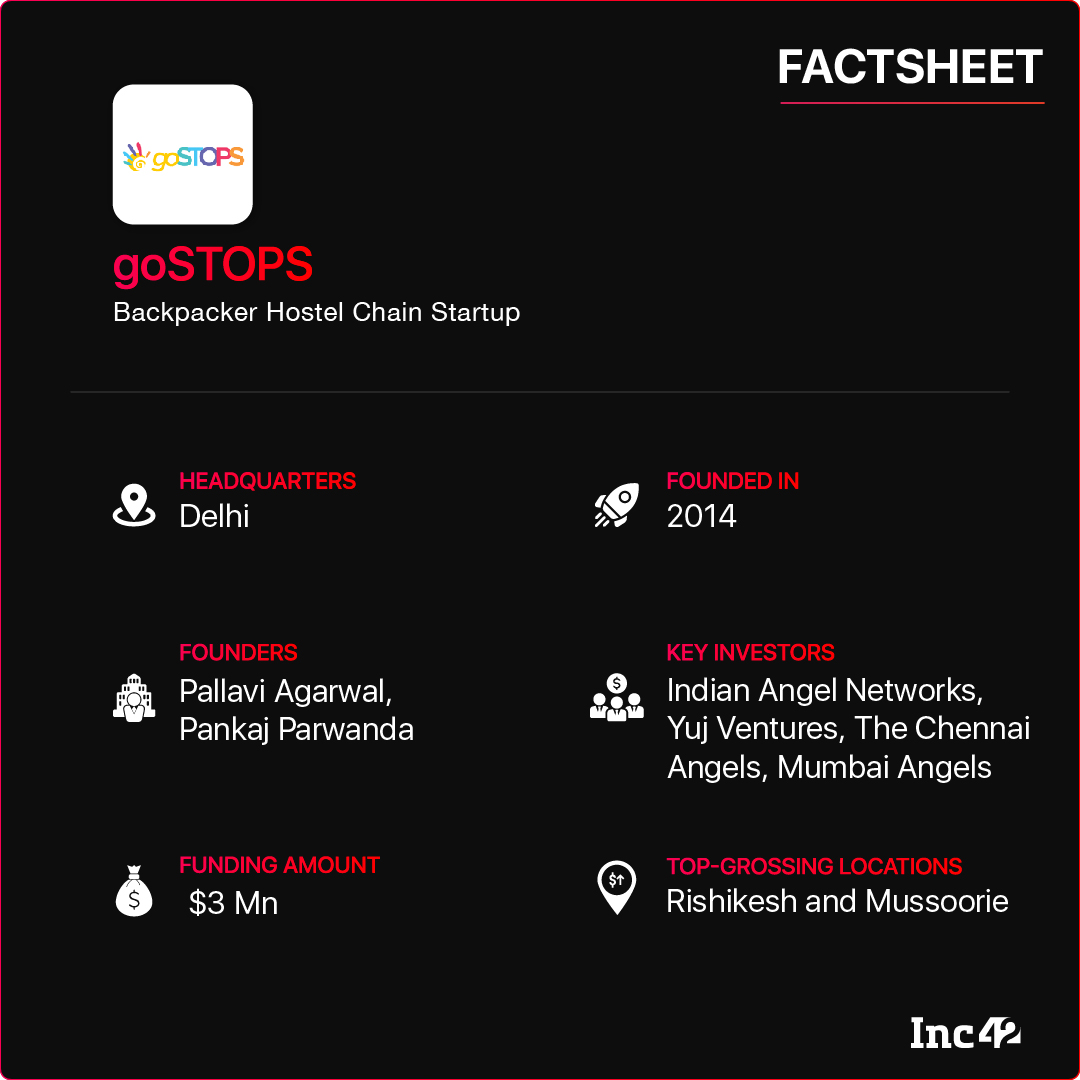 The COCO model is an outright rental model where the property owner receives a monthly rent and the cost of transformation of the property into a goSTOPS hostel is handled by goSTOPS.

In the FOCO model, the franchisee (read the property owner) bears the initial cost of setup required for converting a hotel property into a hostel and the operating costs are borne by the startup. Apart from the property rent, franchisee partners also get a monthly return on their investment (ROI).

As the hostels have dorm-like setups, around 90% of their revenue comes from bed booking and the rest from additional offerings including food and beverage and trekking packages. The startup currently has more than 3,000 beds and plans to add up to 8,000 beds by the end of the current financial year.

“Converting a property takes around two months and involves the conversion of room inventory into dormitories, complete with lockers, fans, charging sockets and reading lamps for each bed. It further requires developing community halls with pool tables and foosball to encourage social interactions,” explained Parwanda.

Further, the team handles marketing, strategy, customer support and reservations to ensure a steady stream of bookings for the hotels. Hence, taking the burden off the franchisee partners’ shoulders.

“The ROI we deliver is better than the conventional hotel setup as we cater to a specific consumer group, and businesses can be optimised accordingly,” the cofounder said. “We can sweat every inch of the place by putting multiple bunk beds. So, the monetary benefits our partners get are unrivalled,” Parwanda added. 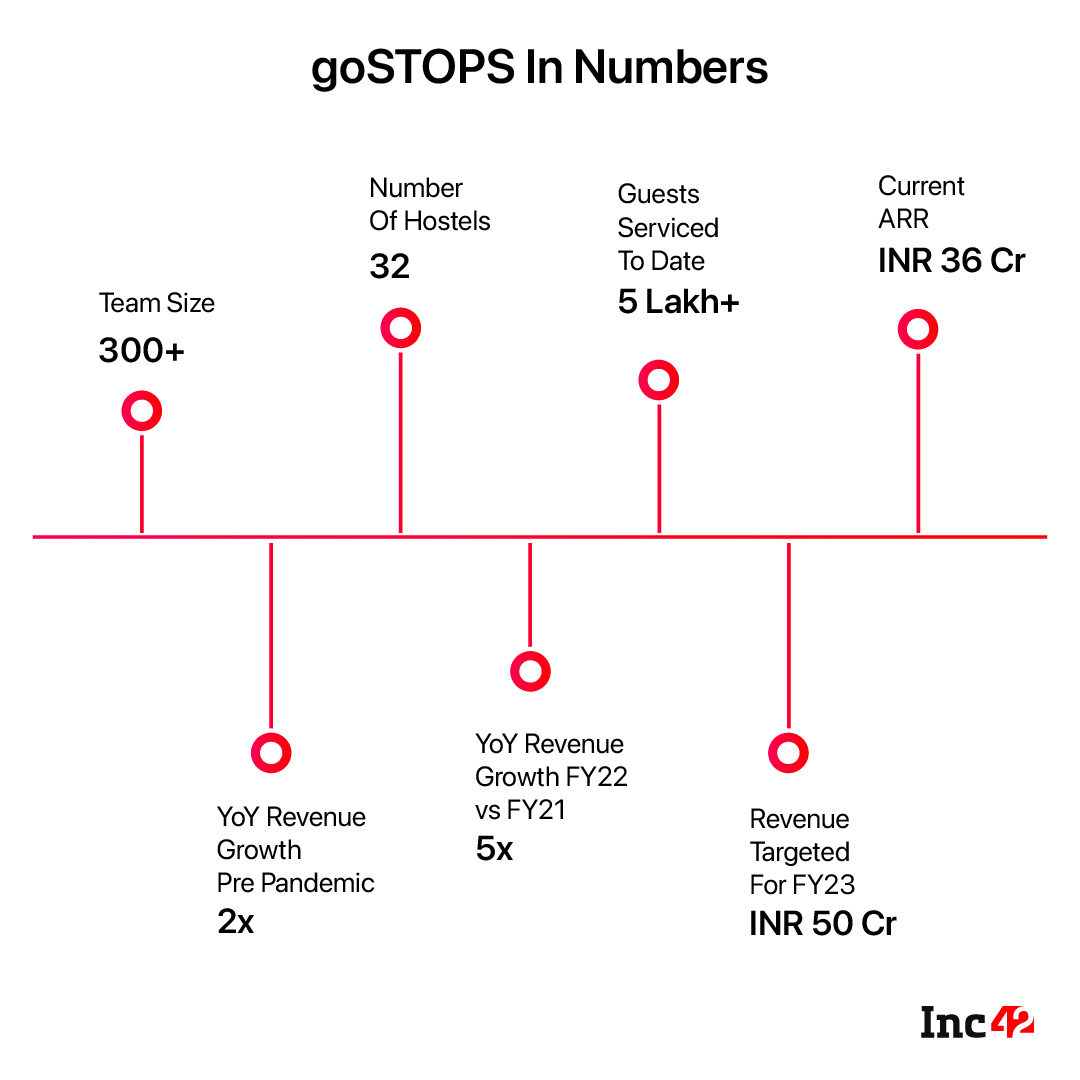 Pulling Out All Stops To Cope With Covid Roadblocks

The cofounders’ vision to bring a globally successful youth hostel model to India started to pay dividends within a few years. But the startup hit a stumbling block when the outbreak of the Covid-19 pandemic brought the world to a shuddering halt. Most sectors were affected by the unprecedented crisis, but travel, tourism and hospitality came to a near standstill, leaving thousands jobless. According to Research and Markets, the hotel industry experienced an occupancy decline of 77% in 2020.

Initially, the startup found itself in dire straits as it had to shut down all its facilities. But all its investors, franchisee partners and other stakeholders came forward to support it in uncertain times. For instance, the property owners decided to forego rents and goSTOPS could continue to pay its staff during the initial phase of lockdown when there was no business. The startup resumed its operations in August 2020.

The cofounders could also recognise an upcoming trend that would drive growth. Given that work-from-home and work-from-anywhere concepts rapidly transformed the way people work, they felt that young people would want to venture out soon to live and work from their favourite locations, be it a little-known hill station or a quiet seaside place. Parwanda claimed that the startup grew its revenue at a 30% MoM rate between FY21 and FY22.

“Many travel companies spent heavily on advertising at the time (to stay in touch with their customers), but we decided to scale. We had studied young travellers for nearly six years by then. So, we knew that the youth would be the first to gravitate towards this sector as soon as the economy opened up,” said Parwanda.

Later, in December 2020, the startup approached The Chennai Angels (TCA) for funding. It was shortlisted for an in-person presentation, and TCA investors loved the concept.

“The project looked very exciting. The cofounders already had great traction and sought funds to grow from 22 to 50 hostels by the middle of 2022. They also made an attractive offer to investors regarding possible returns,” said author and goSTOPS’ lead investor from TCA, Sivadas R.

To date, the startup claims to have raised three rounds of funding. In June 2021, it raised $1 Mn in a Pre-Series A round led by the Indian Angel Network (IAN) and Yuj Ventures. TCA, Chandigarh Angels and Mumbai Angels also took part in this round. Last December, goSTOPS raised another $1 Mn from existing investors, including TCA and onboarded new angel investors including Rohit Chanana of Sarcha Advisors.

Most of the capital raised has been used to put the pedal to the metal and implement the startup’s aggressive expansion plans. “Through the Covid years, we have grown 6x in terms of number of beds ,” claimed Parwanda.

Although new variants of the coronavirus are still plaguing the world, the year 2022 has brought some respite to tourism and hospitality in spite of tight restrictions. Globally, tourism grew 130% in January this year, while the domestic market had earlier seen an unprecedented rush to holiday destinations far and wide. Simply put, these sectors are yet to reach the pre-pandemic levels, but businesses are grabbing all opportunities that come their way.

But will that spell tougher competition for goSTOPS and its ilk, which have emerged as the go-to place (for young travellers) due to their modern amenities and pocket-friendly, shared-living model?

Take, for instance, Airbnb, the marketplace for homestays and lodging. The San Francisco-based company has expanded its operations across borders and recently introduced different property types, including vacation homes and shared spaces. Subsequently, it may try to tap into the young travellers’ segment.

There are more such examples. AccorHotels, one of the EU’s largest hotel groups, joined the youth hostel bandwagon as early as 2016, proving that deep-pocketed legacy players do not lack the appetite to foray into budget stay segments.

The way traditional players and new entrants are rushing in this space to woo young travellers shows that youth travel has emerged as one of the most promising segments for the hospitality industry.

Nonetheless, Parwanda feels that affordability is not the only factor attracting India’s youth towards the backpacker culture. “People in this age group (18-30) are more mobile and want to enjoy a nomadic getaway once in a while, which is why they choose us,” he said. Given the scenario, legacy players too will have to pull up their socks to meet the millennial generation’s rich in experience, light on pocket expectations.