Founded by Manish Maryada and Shourya Lala, Fello awards game tokens to users who invest via its platform to play its in-house games

Only 6% of Indians regularly invest in growing their assets. The number is even lower among the younger people – Gen Z and Gen Y – who lack financial education and are inherently unenthusiastic about building a healthy financial portfolio.

However, Bengaluru-based fintech startup Fello is trying to change this. The game-based savings & investment platform for new-age investors awards users gaming tokens for every rupee saved and invested through Fello. These tokens can be used by the users to play fun in-house games to earn rewards and prizes.

At the end of the day, instead of playing skill-based games with real money, the user is actually saving or investing the money and still getting to play the game. To make this a fun as well as a ‘good’ habit, the rewards of these games are further invested, thus making it a net-zero loss game for the user.

The startup believes that gratifying users has been a huge part of the banking industry since the very beginning, for instance banks offering vouchers upon shopping for an X amount. Moving one step forward, Fello decided to add an entire layer of gaming to the platform. 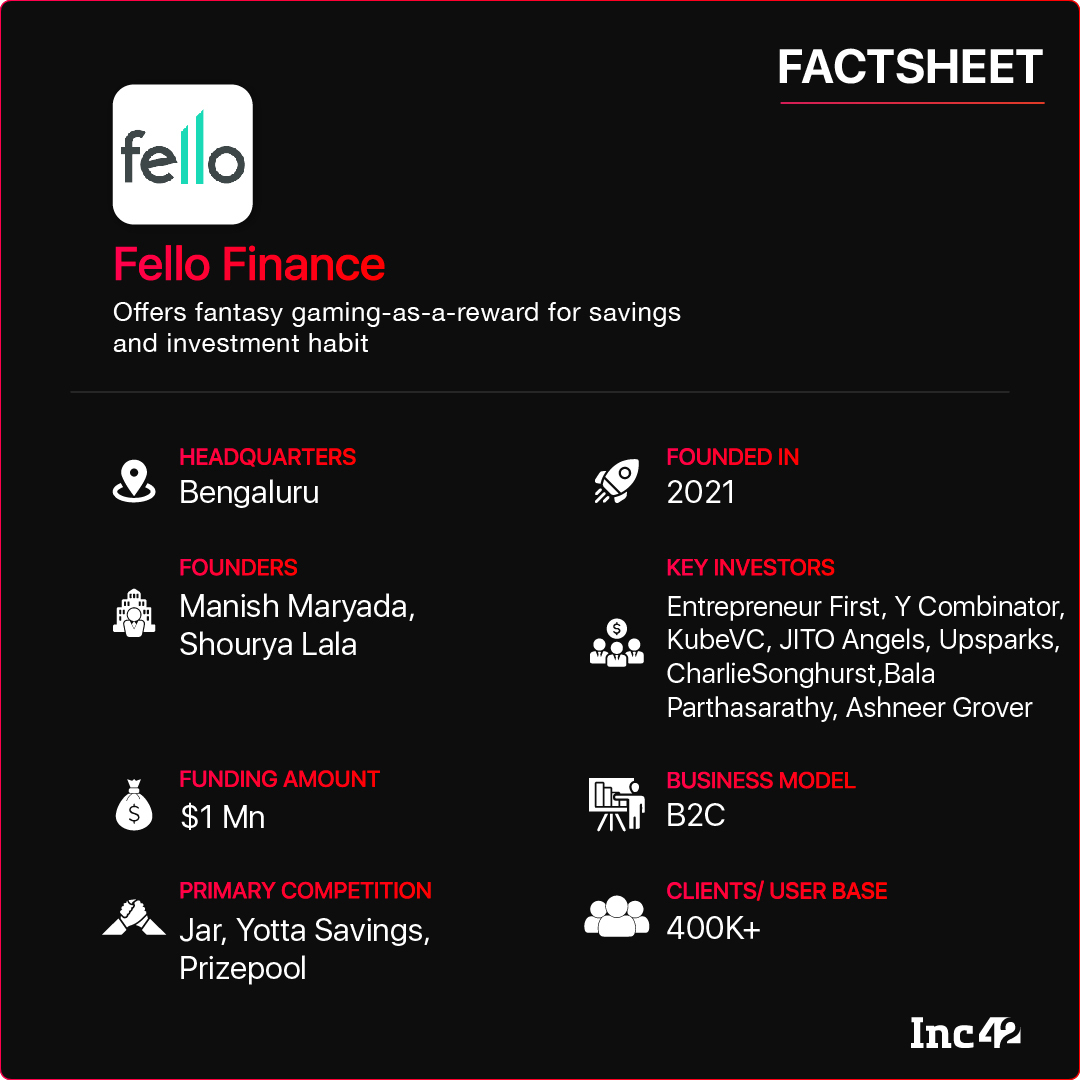 The Idea That Led To Fello

In early 2020, Manish Maryada and Shourya Lala decided to build a robo-advisory platform that would drive the tech-savvy millennials and GenZ to save and invest smartly. But the budding fintech scenario had many financial robo advisories, so the duo explored the market, interacted with their potential customers and found three unique insights, one of which would lead to the launch of Fello in 2021.

The insights were simple. One, users were inclined to pay digitally because of the ease of use of UPI apps and how these apps incentivised them via cashback and coupons; two, users got their savings and investment advice mostly from friends and family; three, 70% of their customers were glued to paid fantasy and casual style gaming applications because it was instantly gratifying.

This was the eureka moment for the founders, who launched the fintech startup in a bid to change the look and feel of how people interacted with financial products and wrapped it with the world of gaming.

The idea was to get users to build an investment portfolio rather than putting money in a fantasy gaming platform expecting some returns and rewards, but still getting the adrenaline rush of playing games.

In an interaction with Inc42, Maryada, who is also the CEO of Fello, stated that 60% of the people with whom the company interacted, did not have enough money to meet their needs for the next three months.

“They saved money in a bank account, earned returns less than the inflation rate, and only 3% of them explored alternate investment markets. Yet, they were spending money left and right on paid and fantasy games to earn financial rewards. They forget the fact that the probability of them winning in these games is low, because of which they are losing their money,” he said.

The startup also observed that people did not love learning finance as it was ‘boring’. That was when the founder duo realised that the retention and learning curve would be a problem and they could bridge the gap by not only bringing something new to these users but capitalising on the existing behaviour of gaming itself.

“With Fello, you’re technically linking a subtle price or incentive for a healthy banking ecosystem,” he added.

While gamification is a hot trend among fintech and blockchain startups, Fello only aims to gratify users with its gaming platform.

The Journey Of An Investor On Fello

The startup currently boasts of 80% organic user acquisition via referrals, who can download Fello’s Android app and sign up to invest.

During its onboarding process, Fello determines whether the user is a first-time investor. Upon signing up, users get 100 free Fello tokens through which they can play the games. Once these tokens run out, users are compelled to explore the application, where they find investment and savings products such as digital gold. Investments start as low as INR 10, and for every rupee invested, a user gets one token. 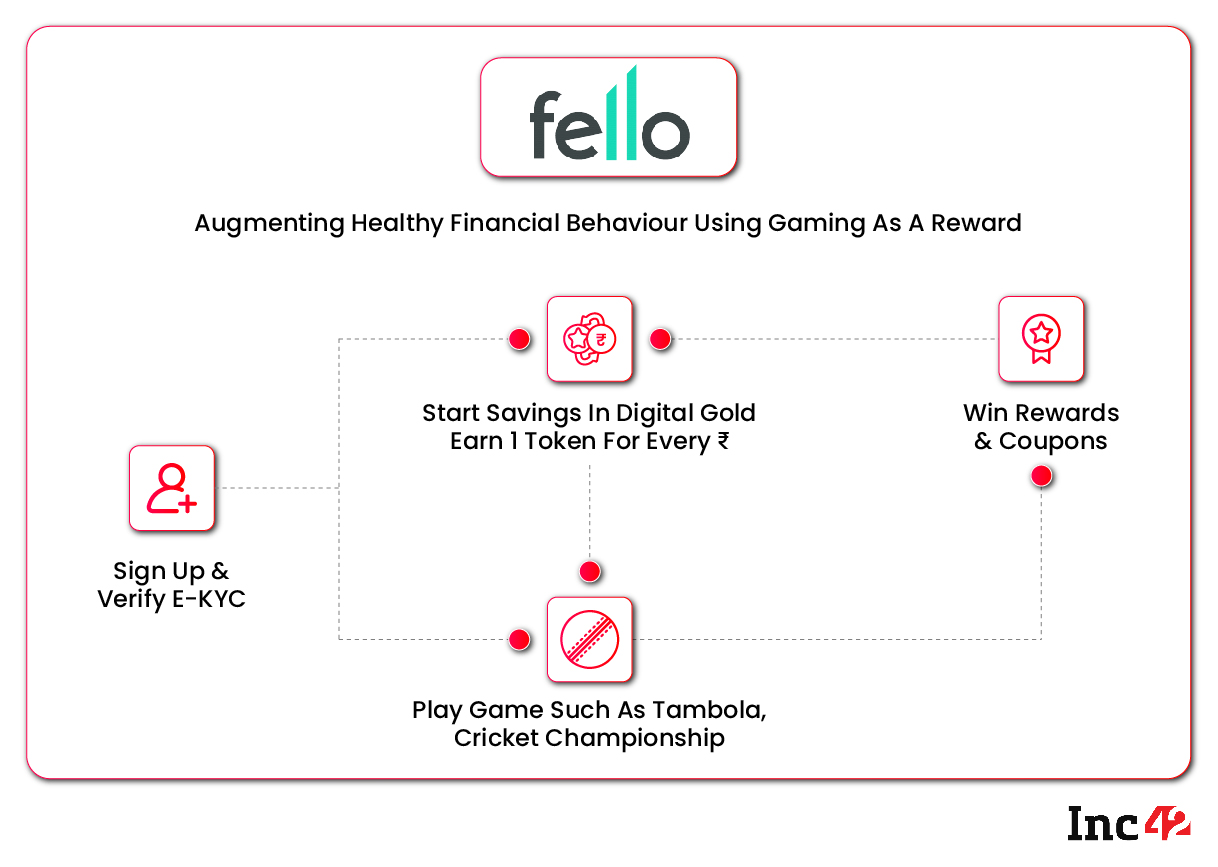 The startup also has an auto-save feature through which users can upload e-mandates and save regularly, but the concept is in a very nascent stage due to the availability of limited asset classes.

Fello has partnered with ICICI Prudential Mutual Fund and Augmont gold as their fund partners. It is working with these asset managers to provide savings and investment solutions and earns commissions from these financial partners. The platform is free for retail investors.

Whether users win or lose the games, they have to invest their money. “Users cannot liquidate their winnings, and Fello ensures that the money does not leave the ecosystem in the form of rewards or discounts,” Maryada said.

Understanding The User Demography Of Fello

Fello cofounders emphasise that they didn’t start with the idea of using gaming as an incentive for users, but stumbled upon it by chance.

“We wanted to start nudging users towards healthy finance from day one. It just felt like uncharted territory, where our demography of investors coincided with people who have an inherent inclination towards paid fantasy gaming, and 93% of them are first-time savers,” Maryada added.

The startup started by building a robo-advisory platform, but due to the inherent psyche of a millennial user getting bored with the financial advice ‘bhashan’, Fello pivoted to providing a zero-learning curve and playing on the sidelines.

The startup boasts of 400K+ users, with a male-to-female ratio of 65:35. The average age of a Fello user is 24.5 years and 60% of these users are from Tier 1 cities. The startup has been adding new users majorly from Lucknow, Kolkata, Bengaluru, Hyderabad and Jaipur.

An average user spends 11 minutes daily on the Fello app, while Power users (investors with high spending volume) spend over 20 minutes daily on the platform. The startup, however, refused to disclose the average investment amount of users or the assets under management (AUM).

Road Ahead – The Neobanking Dream

The early stage startup is backed by Y Combinator and Entrepreneur First, among others. It has raised $1 Mn in seed funding so far. Fello is now playing the user acquisition game to reach 1 Mn users by deep diving into Tier 2 cities and targeting to reach an AUM of $50 Mn by FY23.

Operating in a $14 Bn investment tech market, the startup competes with the likes of micro savings platforms Jar, Yotta and Deciml. The market differentiator is that while standalone spare change savings is an innovative feature, the gaming layer does the job for Fello.

Now, the founders aim to turn the startup into a neobank by 2025, where users can build not only healthy savings habits but also credit and investment habits.

“We are coming up with 2-3 different asset classes now, with one core proposition – we want to give at least twice the banking returns. We have five games and one asset class right now. By July 2022, we’re launching the new version of the application where we will have three asset classes and 10-15 games,” Maryada told Inc42.

Currently, Fello hosts fun-to-play games such as cricket championship and tambola, but plans to add team games, battleground games and games with a factor of financial learning to the mix.

The startup currently has an internal team which builds the games, but Fello is also partnering with third-party developers to build and ship the games.