It’s hard to believe that just over three decades ago, Indians could legally consume marijuana and all its derivative products. But how the world has changed since then that not only has cannabis been banned for consumption, but now it’s making a roaring comeback.

Till 1985, cannabis was legal and was widely accepted in India. But the so-called war on drugs by the US forced many of its allies to blacklist cannabis. India’s Narcotic Drugs and Psychotropic Substances (NDPS) Act brought a complete ban on the sale and purchase of cannabis in India. But many say India is sitting on top of an untouched gold mine. Not only does the country have a storied ritualistic tradition revolving around cannabis, but cannabis indica, one of the two primary species in the cannabis family, is named for its prevalence in India.

Naturally, legalisation of cannabis has been a hot topic of debate for many years in India now, and many have questioned the logic behind the prohibition. But while consumption of marijuana through smoking or edibles is prohibited, cultivation of hemp and cannabis for industrial and medicinal purposes has been legalised.

“We don’t have any opinion on whether cannabis should be legalised or not, as we are just focused on delivering pain relief, given the regulatory framework we have today,” says HempStreet founder Abhishek Mohan.

With the government’s clearance of usage of cannabis for medical purposes, a slew of new brands have popped up in India. Slowly, the sector is unfolding and a lot of startups are emerging in the space, including HempStreet, Bombay Hemp Company, Be.Hemp, Awega Green, Namrata Hemp Company, NirogStreet, Hemis, Its Hemp and Vedi Herbals among others.

Last year, the Indian government allowed cannabis or hemp (non-drug category) products to be sold on general ecommerce sites after necessary due diligence. As per law, medical supplements need to contain both cannabidiol (CBD), the cannabinoid linked to pain relief and tetrahydrocannabinol (THC), the psychoactive component of marijuana, which is primarily what gives someone that high when smoking marijuana. Since it is illegal to isolate CBD and THC in India, except for research purposes, marijuana is only allowed to be used for medicinal purposes in the Indian market so far.

New Delhi-based cannabis healthtech startup HempStreet is among the slew of startups focussing on pain management and chronic pain relief through cannabis. It claims to be India’s first research to retail ayurvedic cannabis venture. The company has been working with scientists, research institutions like Council of Scientific and Industrial Research (CSIR) to conduct research and development around safe medication utilising cannabis.

According to the latest report by Grand View Research, the global legal marijuana market is expected to touch $73.6 Bn by the end of 2027. In 2019, the medical usage of cannabis usage held a majority revenue share of 71%, owing to the growing adoption of cannabis as a pharmaceutical product for treating several medical conditions such as cancer, arthritis, chronic pain relief, Parkinson’s disease and Alzheimer’s disease among others.

Speaking to Inc42, Abhishek Mohan, cofounder of HempStreet said that most pain relief management these days does not bring any relief and excess use of such medicines is often risky and addictive. Particularly, addiction to opioids like oxycodone, hydrocodone, codeine, morphine and others is a high risk factor for those in need of pain relief.

“The addressable market is in multibillion dollars,” said Mohan. As per IMARC report, the demand for pain management drugs is escalating across the globe, as the prevalence of chronic pain is significantly higher in older adults. In India, 70% of the rural population consumes ayurveda in some form or the other.

But instead of setting up a store and a distribution network for consumers, HempStreet is looking to tie up with medical practitioners, where patients can procure cannabis-based supplements with a prescription. “With our network of 60K ayurveda practitioners, we are estimating a footfall of about 37 Mn patients every year,” he added, pointing at the market potential for ayurvedic cannabis products.

Founded in 2019, HempStreet was cofounded by Mohan and Aradhna Rai. Besides HempStreet, Mohan is also the cofounder of Technology 9 Labs (T9L), which is a venture studio with a portfolio of 41 startups and cumulative valuation of $600 Mn across its portfolio.

Currently it has 16 approved products, sells its products through a network of 60K doctors and 300+ clinics. “We have recently started our manufacturing process, where we have three products that we will be launching in the market soon. Accordingly, we will be deploying products to the ayurvedic clinics and medical practitioners across India,” shared Mohan.

HempStreet raised $1 Mn in Pre-Series A Funding round led by a US-based pharmatech company Pharmacon Holdings and Romain Barberis, a seasoned private investor in the cannabis market in the US and Canada. And it’s looking at the foreign market for further growth given the greater acceptance for medicinal marijuana in these countries.  “We are already receiving a lot of enquiries from countries like Germany and Canada, and also a lot of investment communities abroad have been reaching out to us,” shared Mohan. 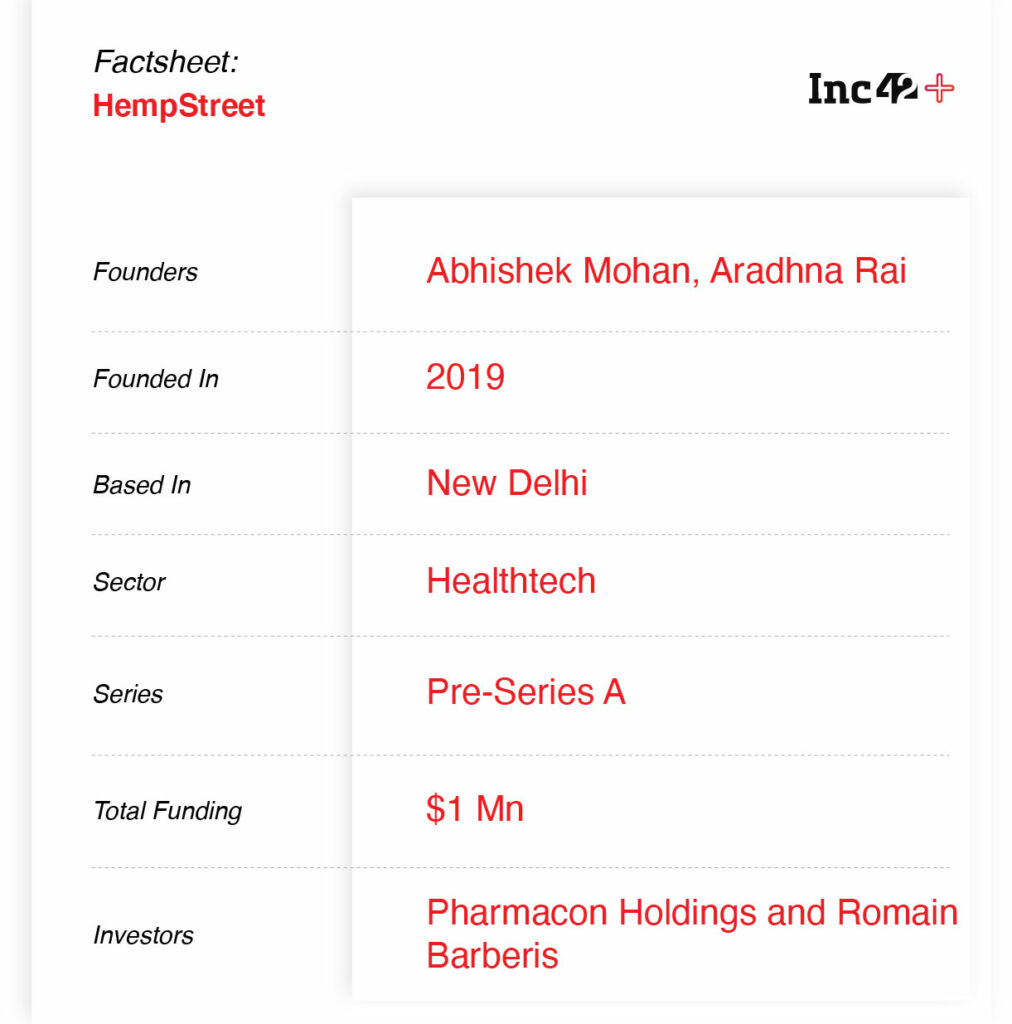 Today, HempStreet positions itself as a B2BC company, where it has partnered with ayurvedic clinics and medical practitioners to sell its products, so that the medicines are sold to the customers using doctors prescription only, unlike its competitors who are following a self-declared omnichannel retail or direct to consumer (D2C) model to sell its cannabis products. “We don’t sell our products online, as we believe in giving comfort to the regulators in a sector that is highly regulated,” said Mohan.

However, in the last few months, due to Covid-19 lockdown, many clinics have shut down or had zero foot-fall. HempStreet claimed that only 4% of its partnered clinics are temporarily closed, while the rest of them are still active. “Ironically, our ayurvedic practitioners have witnessed a surge in demand in the recent past, as a lot of patients are calling them on the phone. Today, people have become super conscious about their immunity requirements, and lifestyle changes are happening across the country,” said the cofounder.

In a bid to bring in transparency and traceability in the ayurvedic cannabis supply chain, right from sourcing raw materials to manufacturing, distributing cannabis products to clinics and ayurvedic practitioners, the company is currently experimenting with blockchain tech. With this, the company aims to track and trace the supply chain process so that it is not misused or over prescribed by the medicine practitioners.

Mohan told Inc42 that the platform is still in the beta testing phase, and will be able to share more details once it officially launches its products in the market. “This is happening for the first time, and we want to get this right. Therefore, our responsibility, at this point, is all about aligning towards regulators and end users. Since we are dealing with cannabis-based pain medications, which is not as severe compared to opioids — a failure in the supply chain can hamper the progress,” he added.

At present, HempStreet sources raw materials from the state excise department. However, in the coming months, it plans to procure the license to set up its own manufacturing base in India, which will allow them to bring best practices to farmers, alongside working with the excise department, manufacture and distribute it to clinics and ayurvedic practitioners.

It has to be noted that the supply of cannabis raw material, today, is controlled and enabled by the excise department of the state that the hemp-based companies operate in and they in turn source it from collection license holders. In India, to legally manufacture hemp-based products for industrial and medical use (THC lower than 0.3%), the companies need to apply for a permit for an allocation of raw material volume of products it wishes to manufacture for that fiscal year.

“As long as one is looking to operate above board and building a genuine set of products to be dispensed responsibly, sourcing from the excise department is not at all a problem,” shared Mohan, and stated that there are no hurdles in the process.

Going forward, the company said that it will continue to invest in its research and development and launch new cannabis-based products into the market. “There are already a ton of formulations in ayurveda that addresses some of the chronic diseases such as Alzheimer, dementia, arthritis, asthma and cancer, but we will be doing our independent research to test and verify, and unleash the potential of cannabis-related medicines in India,” concluded Mohan, “this is just the beginning.”