Installed On 1.3 Bn Devices Already, Helpshift Aims To Be In Every Big Brand’s App

Installed On 1.3 Bn Devices Already, Helpshift Aims To Be In Every Big Brand’s App

When Nexus Venture Partners’ MD Naren Gupta offered $500K to Abinash Tripathy in 2010 for his next idea over an informal lunch, his proposition was simple, “Take our money. We like you and your team. You will do something with it.” Abinash, however, was not sure. Because he did not even know what did he want to do next, except the fact that it would be a SaaS company in B2B space.

Of course, having spent a considerable time in enterprise software and having built a Quora like product for knowledge management in enterprises called Qotd (Question of the day), that was a natural choice. But Abinash realised that though knowledge management was an important problem for enterprises, it was not a pressing one. Hence, the company pivoted and with Nexus in the picture, the big question that Abinash and his team had to answer was – what are the areas where they should choose to create value?

So, the team got back to thinking what problems are enterprises facing? During that time they realised that the customer support industry, which is almost a $360 Bn opportunity globally, was ripe for disruption. With the thousands of call centres making it a labour intensive industry, there was a huge scope for automation and technology to offset the intensive cost and effort of labour. That is when the team started thinking about the problem. Incidentally, it was also the time when smartphones were getting popular and apps were going to become ubiquitous. Sensing an opportunity here, Abinash and co-founder Baishampayan Ghose thought of building a new class of customer service software, which will be optimised for the smartphone. 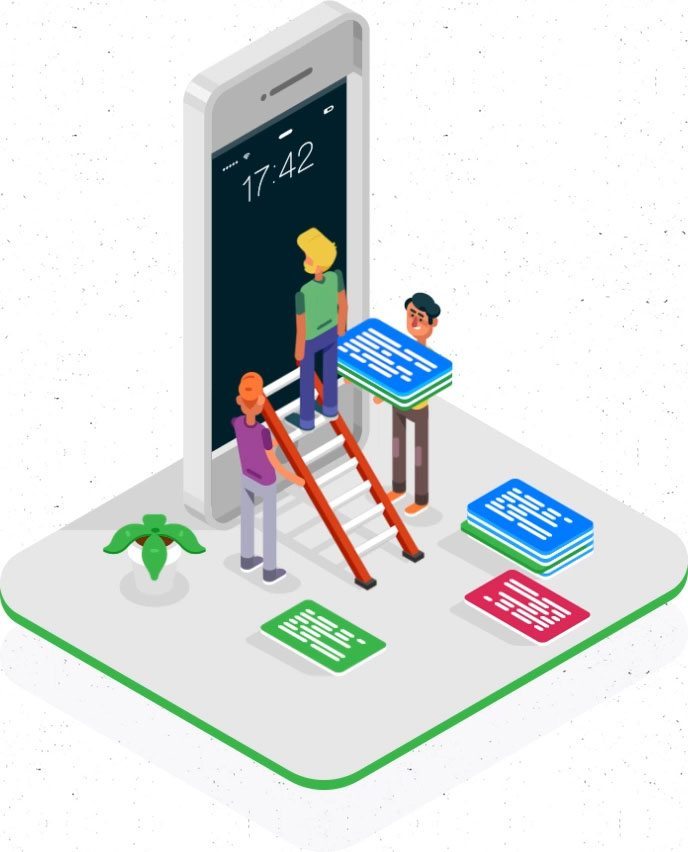 So, in 2011, they made a prototype but it had way more than mobile. The CRM had everything – chat, email, phone support, and mobile support. When they took this to Valley investors in 2012 for raising a seed round, two other companies in the space — Zendesk and Freshdesk—were also raising huge amounts of money. The team realised that they could not go head to head with these two companies just by building a better product because they had raised more money and were already way ahead of them in market acceptance.

It was then that Abinash and team decided to differentiate themselves from competition by focusing solely on mobile. So, they stripped down their prototype completely and thus was born Helpshift – an end-to-end mobile support platform, which enables brands to keep their users engaged, communicate with them in-app and support them proactively.

Helpshift integrates seamlessly with mobile applications to offer businesses a new way to communicate and engage with customers in-app, while reducing customer churn, support ticket volume, and overheads. These are offered in two ways. First is the Self-Service team, which is expressed as a FAQ inside the app. The FAQs are basically a content management system in apps to address user queries. The second solution is the in-app messaging, similar to a Whatsapp-like experience for customers of any brand to chat with the brand. Says Abinash,

“Earlier customer support was provided through phone or email, which was frustrating to users on account of slow response times. Given that today’s millennials are used to texting and chatting, we replicated the same experience in the app itself for customers of the app to contact the company.”

Meanwhile, to facilitate this, the startup also provides agent dashboards, for agents of the company to respond to messages. Helpshift’s collaboration features include private notes, @mentions, and agent collision detection-which enables the entire organization to work together and solve customers’ problems without stepping on each others toes. Thus through easy support and efficient CRM, Helpshift aims to keep users of any brand more engaged, leading them to spend more time and more money in the app, and in the long term, staying more loyal to the app.

Helpshift is very clear that it wants to go after big brands with deep requirements. So, all brands that are customers of Salesforce would be ideal target customers for Helpshift. Says Abinash, “Our USP is that we are trying to solve a large problem of making customer support industry super-efficient for both consumers of large brands as well as the brands. So, neither we want to go after smaller companies nor build 100 products. We want to be very niche and build a deep product as that is how you sell to enterprises – by building a deep product, not shallow products like for startups or smaller companies.”

But, of course, this approach had its own set of challenges. “The biggest challenge in gaining traction was in educating customers on why they needed to do this when there were established models in the web era (email support, phone, etc.), which our larger competitors like Salesforce and Zendesk were selling already. The strategy we adopted was to go after the largest apps in most categories in the app store and win them, which would make others take notice of what we had to offer and this paid off,” says Abinash. 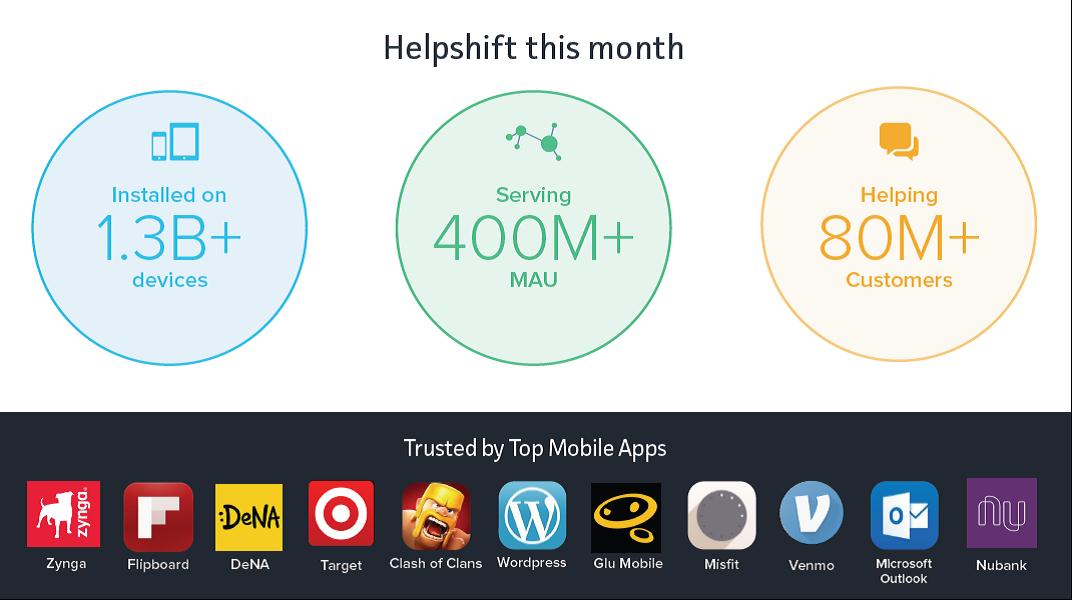 And it did. The startup now has some 1,000 clients in its kitty, counting heavyweights such as Zynga, VirginMedia, Microsoft, Supercell, Honeywell, WesternUnion, Flipboard, Shyp, Luxe, WordPress and many other industry leading brands, startups, and developers. 93% of its customer base is outside India while the 7% Indian clientele consists of notable ones like Times Media (Gaana), PepperTap, CommonFloor, Swiggy, and Redbus, among others.

Hence, when Helpshift closed Supercell and was embedded in games like Clash of Clan (which hundreds of millions of people play every month), two things were validated for the team. First that Helpshift’s in-app experience was powerful and compelling for their customers and was indeed better than the email and web support model for mobile apps. Secondly, Helpshift’s platform could scale up for large publishers like Supercell and was ready for enterprise customers. Thus, its “Go Big” strategy worked wonders for it.

Helpshift now claims to be installed on more than 1.3 Bn devices worldwide, and serves 300+ Mn mobile customers monthly. Like any best in class SaaS company, after its product launch in 2013, it has been clocking a year on year growth rate of 300%.

The startup monetises in two ways – it either charges on the basis of the monthly average user of the app, or it charges for every agent on the brand’s backend who uses Helpshift’s system. Professional plans start onwards of $185 on a monthly basis.

As far as funding is concerned, Helphshift counts some top notch names in the industry as its investors. The startup raised its seed round of funding in 2012, wherein it raised $3.5 Mn from Nexus Venture Partners and True Ventures. Series A followed in June 2014, with $10 Mn flowing in from Intel Capital, Visionnaire Ventures ,True Ventures and NVP. Last month, it closed a $23 Mn Series B funding with participation from new investors—Microsoft Ventures, Salesforce Ventures—and all previously existing investors, including Intel Capital, Nexus Venture Partners, True Ventures and Visionnaire Ventures. This brings the company’s total raised capital to $36.2 Mn.

The team has now grown to 90 people, with around 60 based in its Pune office which handles R&D and product development, while 30 are based in San Francisco to handle sales and marketing. 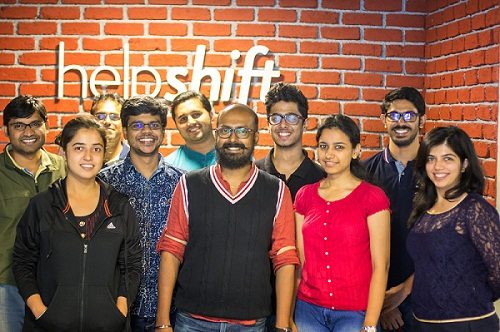 Helpshift has some formidable competition from Zendesk, Salesforce, and Freshdesk. However, Abinash is not rattled as he thinks it all boils down to a question of depth versus breadth. He says, “Helpshift is a deeper product with higher unit economics as compared to broader products for wide markets which have low unit economics. Our competitor’s products fall in the latter category.” He adds that enterprises have deep requirements that require specialists and not shallow products. Hence, what Helpshift is focusing on are not companies with 20 agents in their contact/call centre but with 2000 people in their contact centres. Hence, the differentiation from players who are targeting SMEs and smaller businesses and puts it in the league of Salesforce are aiming to reduce the cost problem and human effort in CRM.

Additionally, unlike its competitors, Helpshift wants be niche and mobile focused. Says Abinash, “Our target is to be in every big brand’s app. We are aiming to reduce the cost problem and human effort in CRM.”

Going beyond in-app support, it has launched another product last year, called Co-active support, as it believes that CRM needs to be proactive now, and not reactive. In co-active support, a company can now send an outbound message to segmented group of customers instead of waiting for customers to initiate an in-app conversation. Says Abinash,

“We want to go after the holy grail of support which is called autonomous support. We see support being an autonomous industry, where instead of human beings you would have bots answering queries. As a technology company, Helpshift with huge data in its kitty, is already leveraging AI to further support and build such autonomous algorithms”

With a $360 Bn customer support industry globally waiting to be disrupted, the opportunity is huge. Helpshift scores on the fact that it has found its niche—the customer’s mobile—as focus of its product strategy. The ever increasing smartphone population globally thus works in its advantage. Nevertheless, competitors are soon catching up there too, as mobile and texting is becoming the preferred mode of communication for everyone. Automation of CRM is a game which will be played better by companies who have larger data sets to develop AI algorithms. Given the fact that it is only chasing the big brands, Helpshift has already positioned itself quite comfortably in this race to use technology to disrupt CRM on a massive scale. How successful will it be in its efforts with stalwarts such as Salesforce and Zendesk leading the race will be interesting to watch out for.