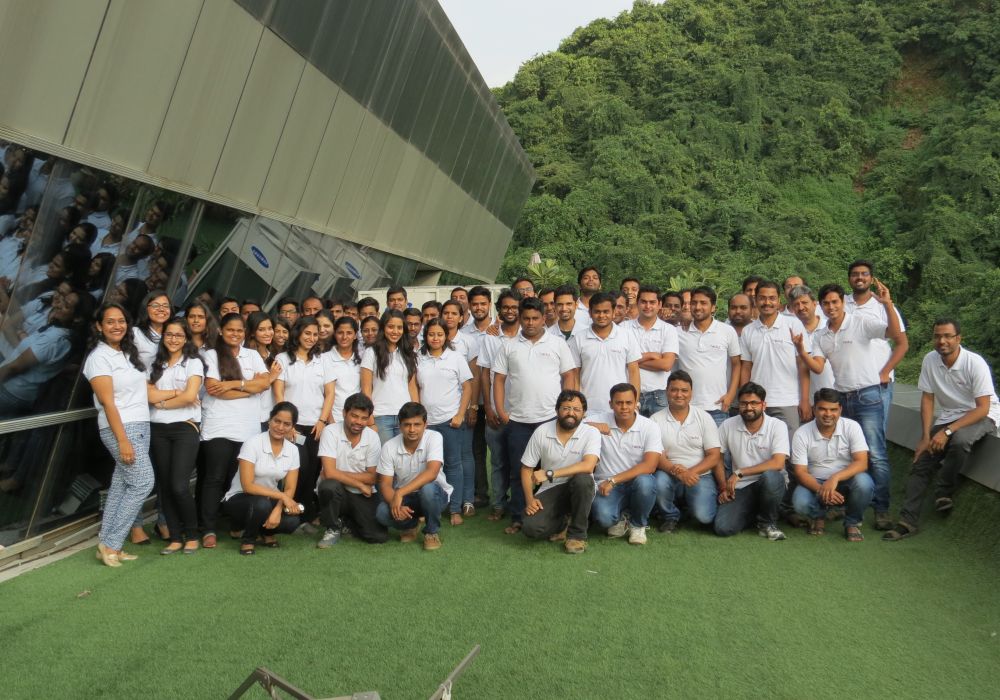 [Note: This article is part of The Junction Series. We will be covering the EnterpriseTech and DeepTech sector in detail at The Junction 2017 in Jaipur. Learn more about The Junction here!]

Mukund Mudras, Abhijeet Vedak, Som Sagar, and Jaison Matthews had comfortable, cushy jobs in the financial heart of the world – New York City. They had survived the recession with their jobs intact and weren’t really looking for a change.

“We were all working for Merrill Lynch, the investment bank seven years ago,” reminisces Mukund Mudras. “It was New York. 2009. And the four of us were having these conversations about digital media in the world and in India, in general. And social media, Facebook and Twitter were just beginning to take the world by storm. And we knew, the four of us that at some point this social media, online media would become the tipping point for all data, even the financial sector.”

Social media impacting the financial sector seems like a tall claim to make so Mukund breaks it down.

“For instance, China’s total trading is $6 Tn. India’s is $1.3 Tn. Trading happens between goods, services, companies, shares and stocks. And this trading is what impacts economies across the board. In an emerging country like India trading is largely impacted by the following factors – it needs homegrown companies in order to grow in worth, and vice versa. With the endless bureaucratic red tape, a certain amount of transparency makes this entire process go smoother and faster. And lastly, you guys,” he adds with a laugh.

“You guys, the fourth estate, i.e. the media elite are/were responsible for the dissemination of information and data.”

Such is not the case anymore. According to Mukund, with the advent of various online publishing platforms such as WordPress, Blogger, self-hosting websites to name just a few, not to mention the insta-way everyone who has access to a smartphone or computer puts forth their thoughts on social media, the publishing game has changed completely. The idea of media being controlled by the elite has decimated – the common has now become the publisher himself.

Facts have become relative to narrative and it is all about cutting through the noise. “The more information there is, the better it is – because now, people have various sources of information to choose from. There is more transparency in media, whether good or bad. With these many sources of information floating around online, let’s say for a particular company, it is important that someone sift through all the data by gathering it, cleaning it and clustering it to give an accurate picture of the company’s position in the media,” he adds.

And this is what big data analytics platform Heckyl does, using its AI-based algorithm.

“Back in 2009, we talked and talked and held discussions  for more than three months. Figuring out what Heckyl was going to be before it was even an idea. It wasn’t a Eureka! moment that happened. It involved careful research and we did our due diligence before we starting working on NAP,” shares Mukund.

Heckyl was founded in December 2010 in Mumbai, but it only became operational in 2012. “We were in stealth mode for the first two years, still developing the algorithm,” he adds.

Heckyl’s first offering, is a news analytics product that was initially called FIND. “What the platform does is – the story about a single company is culled from as many sources as possible and FIND then figures out how many people have viewed the story, after which sentiment analysis is done on the same.”

Sentiment analysis, for the uninitiated, is the analysis of a particular piece of information published about a company/product/brand and breaks it down to whether it is “good” or “bad” for said company.

“For example, even a single word can have different meanings when it comes to different sectors. ‘Layoffs’ will have positive connotation when it comes to the financial sector – as it means the company is tightening its belt in order to gain market value. But, in the automobile industry, ‘layoffs’ predicts doom and gloom – it has a negative impact.”

The FIND engine has been empowered to tag these stories as positive/negative through 1.5 Mn data sources in real-time. “Our engine captures information from all legally copyrighted mainstream media, scrapes it, and clusters it into appropriate sentiment for our clients to make use of, without bias or judgment.”

This information is then passed on to the clients, the day traders and stock brokers who work in the financial sector and who are constantly looking for new ways to jack up their trades based on forecasts. “See, we cannot predict the way a story is broken or what happens when it is put out there. And regardless of how people feel about it, buying/selling i.e. trade will keep happening. It’s an individual’s choice how the information that is given to them is absorbed and used by them.”

In other words, the sentiment analysis engine is just a means to get all the data in one place in real-time in order to make a trade go one way or the other – buy or sell.

“A Reliance or a Kotak or Edelweiss (all of whom are Heckyl’s clients) will deploy our platform and have it integrated in their systems so that every time a story breaks about them, it automatically gets clustered by our algorithm and analysed by sentiment. Whenever a person wants to trade on a particular company, they can click on a story and find out what the company’s standing is and make the trade based on their personal gut feeling.”

From News Analytics To Trading Analytics

Heckyl is an enterprise tech company and it works on a product model. At present, it offers two products on its platform.

“The news analytics platform has been rebranded to TAP (Trading Analytics Platform) and is an analytics-based platform for traders,” says Mukund. “Contextually, how stocks are bought/sold is through data gathered on three fronts – price, fundamentals, and news analytics.”

How he explains it is – the performance of a particular company is based on its finances (profit and loss statements, revenue figures, strength of workforce etc.). Then there is the actual price per share listed on the stock exchange. And finally, all the news stories regarding the particular company that is shared in the finance and business sections of any mainstream media.

“Research/recommendation, price and the trader’s gut, this is the best way to gauge how a share will be bought or sold. But what TAP does is, it analyses price, fundamentals and news analytics and presents a holistic perspective to the trader which he can then use to make the call,” he adds.

How does this holistic perspective occur? “The platform does this in two ways – firstly, it gives a health score to each company based on a variety of parameters which decide whether the company is in good or bad shape. Secondly, one can compare/evaluate different companies on these parameters, under a single platform.” 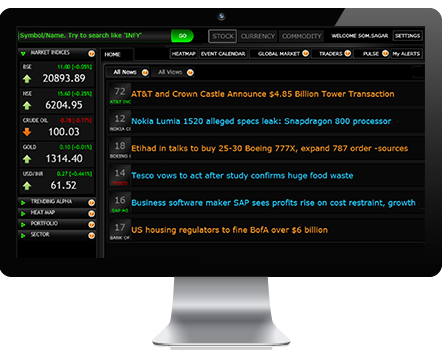 RAP (Risk Analytics Platform) is the second product offered by Heckyl. It is a sophisticated version of TAP and utilises modules from it in order to place early warning systems (EWSs) on the clients’ end in case of a possibility of a loan going bad.

“We use about 20 modules from the TAP platform such as the 1.5 Mn data sources, macro-level global events, company financials and directors of the company, all of which talk to each other for thousands of businesses every sector.”

Mukung goes on to explain about conventional EWSs which are primarily used by banks to safeguard against NPAs, and how they are lacking in transparency and data and therefore not fully effective. “The RAP matters because it showcases all the modules that can be used to assess the risk of a company by virtue of which, all the risk is highlighted. And in real-time.”

While it is brokerage firms that use TAP (Kotak Mahindra, Edelweiss, Reliance, Axis India Infoline) to name just a few, banks prefer RAP as it helps them to assess the risks of large companies who want to extend credit line.

At last count, the company counts 25 brokerage firms and banks as its clients.

Heckyl attracted an undisclosed amount in angel investment in 2012. And then SeedFund Advisors invested $1Mn in the company, followed by a round of $3.5 Mn by SeedFund Advisor, IDG Ventures and angel investor Rajiv Dalal, shares Mukund. As per this VCCircle report, the company was looking to earn $1 Mn in revenues by 2013-2014.

“As far as unit economics go, we have been reasonable in our costs and spending. And as far as revenue is concerned, we have our clients who are paying for the products. So revenue is available for the company,” Mukund says cagily, regarding present revenue figures.

He is reluctant to share actual growth metrics but does say that it counts DNY, Euronext as global customers. The company also has presence in the US, UK, Germany, and France. In Southeast Asia, Heckyl has presence in Singapore and Hong Kong.

Competition in big data analytics comes from players such as Parallel Dots, Dataweave, and others. While Parallel Dots is using sentiment analytics to simplify and collate user timelines and newsfeeds, DataWeave combines retail intelligence for ecommerce users using heat maps. As Mukund says, “We work with the largest banks and brokerage firms and spent about two years perfecting our product. Our algorithm is one of the best engines out there for sentiment analysis.”

In the near future, the company wants to expand to Japan and Australia. “The idea is if the company becomes profitable, I need to grow more. Which means get new customers and grow more. Profits don’t enter it at the moment as we are just four years young as a company. We would rather focus on growth,” he adds.

While analytics has been around for a long time, it is only recently that the idea of parsing data and commercialising said data into consumable products. Data scientists are a sought after breed because of the highly specialised nature of their skill set – something that has been proved by a Mckinsey study that reports a demand of 2 Mn-4 Mn jobs in the business alone as business translators.

The other side of the barrier is – changing organisational mindset and strengthening core competencies of industries are some of the other areas that need to be looked into. The analytics market currently stands at $1.64 Bn and is expected to reach $16 Bn by 2025 worldwide.

With this billion dollar pie at stake, it is up to companies such as Heckyl – with a consumable analytics product in a sensitive industry – and others to prove their market worth and spin off the largely KPO-related analytics vertical into a mighty giant in its own right. Will it be able to do so – that is the real question.