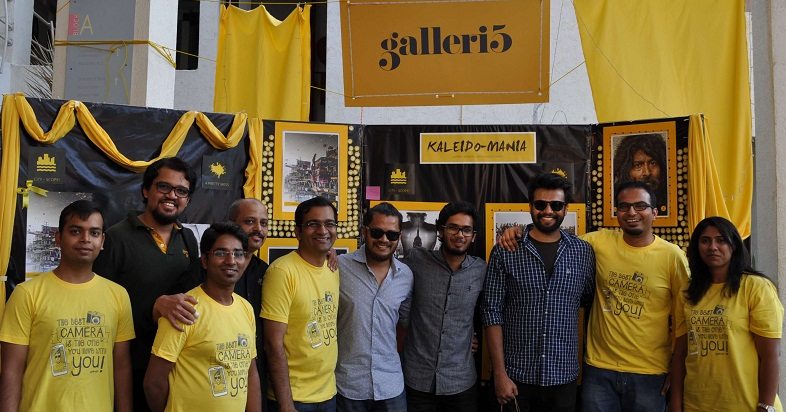 As a management consultant with Booz & Co and then as a senior strategist with Adani Group, Rahul Regulapati, an IIT Madras and IIM Ahmedabad alumnus, was engaged with brands in the digital space and used to run a lot of marketing campaigns, advising leading MNCs on digital marketing strategies & initiatives. During the course of these campaigns, he noticed that everyday users were generating a lot of visual content. As per statistics, over 2 Bn photos are shared every day worldwide. So, even if 10% of these are good and can be discovered and harnessed, it is one big number. But that’s where the catch lies-discovering these photos.

Rahul saw that a gap existed, but was it possible to bridge it? Is there a way to make beautiful photo content discoverable and make the visual discovery process easy for these user-generated photos? 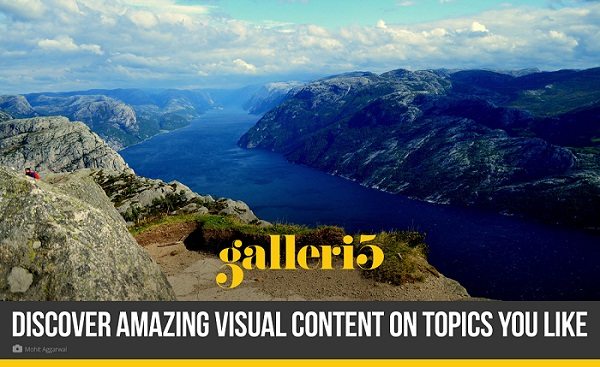 It was that moment which prompted him to collaborate with his IIM-A batchmate Movin Jain, who himself had a penchant for photography to start galleri5 – an interest-based visual discovery platform (mobile app) for finding amazing user-generated photos. The platform focuses predominantly on smartphone photos and enables users to find amazing photos on things they love, such as amazing places to travel to, interesting activities to try out, tempting culinary dishes to experiment and any other thing that might inspire someone.

Founded in June last year, galleri5 was among the top 16 most promising startups selected by Google at the Google Launchpad Week that took place in Bangalore last September. The Bangalore-based startup is now a 10 member team across technology, marketing & design, aiming to disrupt the visual discovery space.

Galleri5 is live on iOS, Android & Web and users who download the app can visually discover interesting stuff on topics they like by following galleries of their interest such as travel, food, sports, fashion, and décor, among others. The app also has a search feature, to find visual content on a specific topic that you may be looking for at that moment. Users can upload photos from their phones, Facebook or Instagram or Twitter accounts. Thus galleri5 acts as an aggregator of photos from all these platforms, harnessing the full potential of user-generated visual content.Says co-founder Movin,

“Our novel recommendation & learning system harnesses crowdsourcing to curate photos into galleries, thus providing the most relevant content to our users through an immersive experience.”

The photos get tagged to relevant topics through galleri5’s in-house crowdsourcing and learning engine, making visual discovery much easier. The platform picks up the metadata, location, and caption of the image. Image recognition will soon follow. Users can also earn “Karma” points by “high fiving” pictures on others’ feeds. The more the karma points, the more followers is one likely to acquire. Adds Rahul,

“Galleri5 users have loved the categorisation of photos into galleries, the design and interface of the app and the quality of content. They are increasingly using the app to discover their next big travel idea, recipe to cook or activity to try out.”

Targeting Anyone Who Takes Pictures!

Galleri5 aims to target anyone and everyone who takes pictures which can add value to enterprises. The likely target group would be people in the age group of 15-25 with strong interests in fields such as travelling, photography, cooking and others, and thus take pictures that can inspire others, individuals and enterprises alike.

Since inception, Galleri5 has about 1,300 users on its platform, with more than 4,000 photographs having been uploaded in its galleries. The startup works on a fixed cost model. So, while the app is free for users, it monetises by giving out the gallery file as an API. It is also very choosy about the brands it on boards as it doesn’t want to dilute its brand reputation. By the end of the year, it is looking forward to engaging with 5-10 brands, which should be more than enough to break-even, given that a majority of its costs are fixed costs. 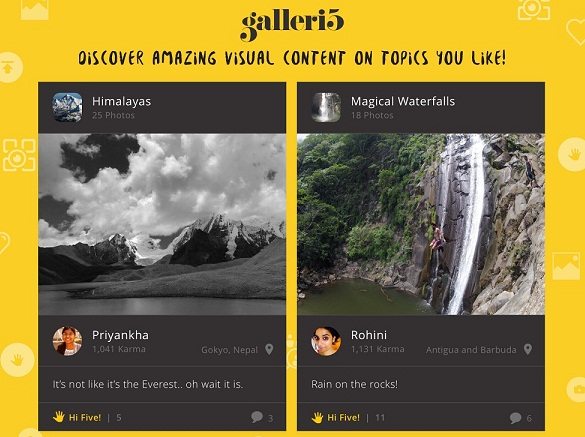 Adds Rahul, “We don’t directly pay the user as we do not take away their photos. What we do is allow brands to directly engage with users.” The startup might even rate the pictures, and might pivot the model later. Going forward, it will focus a lot on the quality of pictures and target colleges, communities, design related people. Galleri5 charges for corporate sponsorships and will be engaging with brands and hotel chains in the future. Currently, it is running a corporate programme with travel website Cleartrip, and is in talks with the Taj Group of hotels for another.

Last October, galleri5 raised an undisclosed amount of angel funding between ($100K-$300K) from well-known angel investors including Raghunandan G, founder of TaxiForSure, Phanindra Sama, founder of RedBus, and Sudipta Bhattacharya, CEO at Adani Group. It is in the process of raising another round as it focuses on increasing traction and deepen engagement with users.

The Other Visual Discoverers

While Google revolutionised the search engine space a long time back, visual content discovery is a recent phenomenon, given the rapid pace at which content is being generated and becoming more difficult to separate from clutter. Additionally, with constraints like privacy settings and filters becoming common, relying on Google alone is hardly an option. Also, most search engines can’t search through Facebook and Instagram. One of the biggest players in this space is US-based  Pinterest, which has raised over $367 Mn in funding in March last year.

Another recent funding in the space of visual discovery was Bangalore-based artificial intelligence startup Snapshopr raising an undisclosed amount in angel funding from top technology executives. Snapshopr helps its customers improve the search and discovery experience of their users using its visual search and recognition products as part of its cloud-based visual intelligence platform. Instead of using text to describe visually rich categories of items like fashion and home decor, the end users can simply use images taken from their camera or uploaded from their devices for search, based on visual content of the image.

Other players include Dribble and Shutterstock.

Rahul, however, believes that galleri5 doesn’t have much strong competition in India as compared to similar social networks & photo-sharing platforms such as Flickr. A very high percentage of galleri5 users are engaged in both content creation and curation, displaying a high level of engagement with the app. Compared to other photo sharing sites, galleri5 is a stronger visual discovery platform. Users can also classify pictures as selfies/non-selfies. Also, when compared with Pinterest, galleri5’s content is entirely original and user-generated, while Pinterest mainly allows discovery of content already posted on blogs /retail sites. 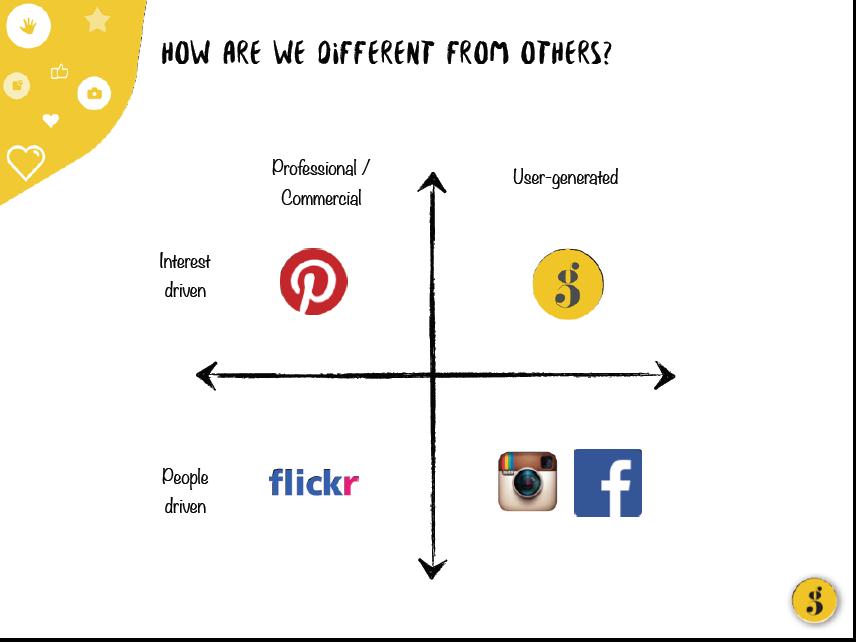 Galleri5 recently published a coffee table book featuring the best photos from their users (most of them were smartphone photos). The book received lot of critical acclaim from many smartphone photographers and enthusiasts. It has now partnered with Hachette Group (one of the top 3 publishing houses globally) to publish the next edition of the coffee table book, which will be themed exclusively on smartphone photos and it will capture unique experiences throughout India. The objective is to show the world how ordinary users tell powerful stories through their smartphone photos. 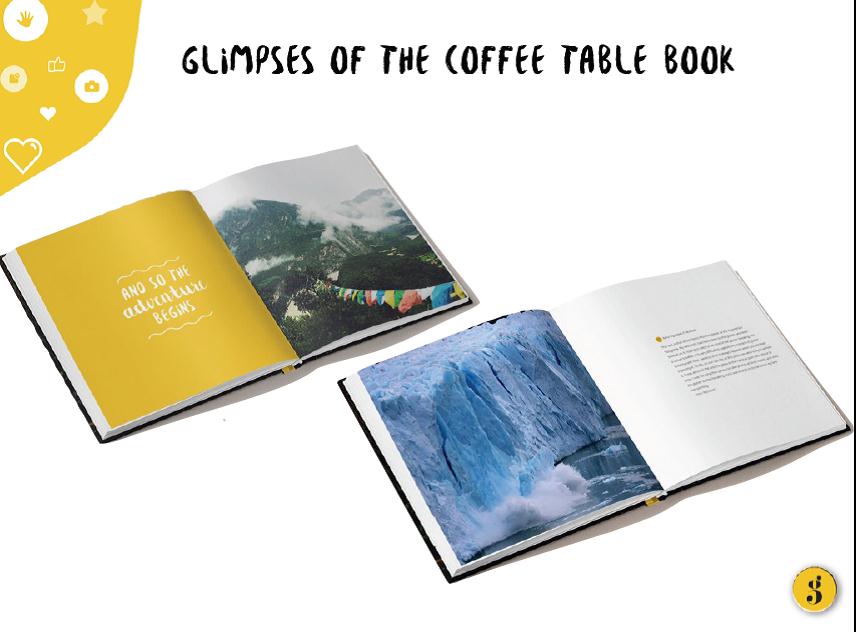 The startup is working with a few corporates as well such as Cleartrip to deliver visual content through systematic crowdsourcing and will associate with brands in the travel, fashion, and hotel industry to gain traction.

Galleri5 is aiming to disrupt the  user generated visual content space by leveraging the power of crowdsourcing. Interest-based discovery is a vast upcoming opportunity and companies such as Pinterest have demonstrated the huge size of this opportunity. Today, over 2 Bn photos are uploaded online every single day, with almost 90% of content being user-generated. What works in galleri5’s advantage is that it has started out early in India and doesn’t have much strong competition to contend with except Pinterest, which has become quite popular in India. As most of the content is user generated, maintaining a high quality repertoire will be one challenge it will face. This is where its sifting prowess and algorithms need to be robust. Building out a solid tech driven platform will enable it to be at par with the quality of professional content and stock photos.

Getting more brands on the platform in order to increase traction and thereby monetise favourably in this new field of visual online discovery is its second challenge. While there’s no doubt that galleri5 is building something very beautiful in the visual content space, the challenge will be to monetise it and build a product that will be used by millions of people for which they could pay as well. It remains to be seen how visual discovery will change the way people use the web in the future, and with its early start in the space, galleri5 has a good shot at being at the forefront of harnessing the full potential of it.