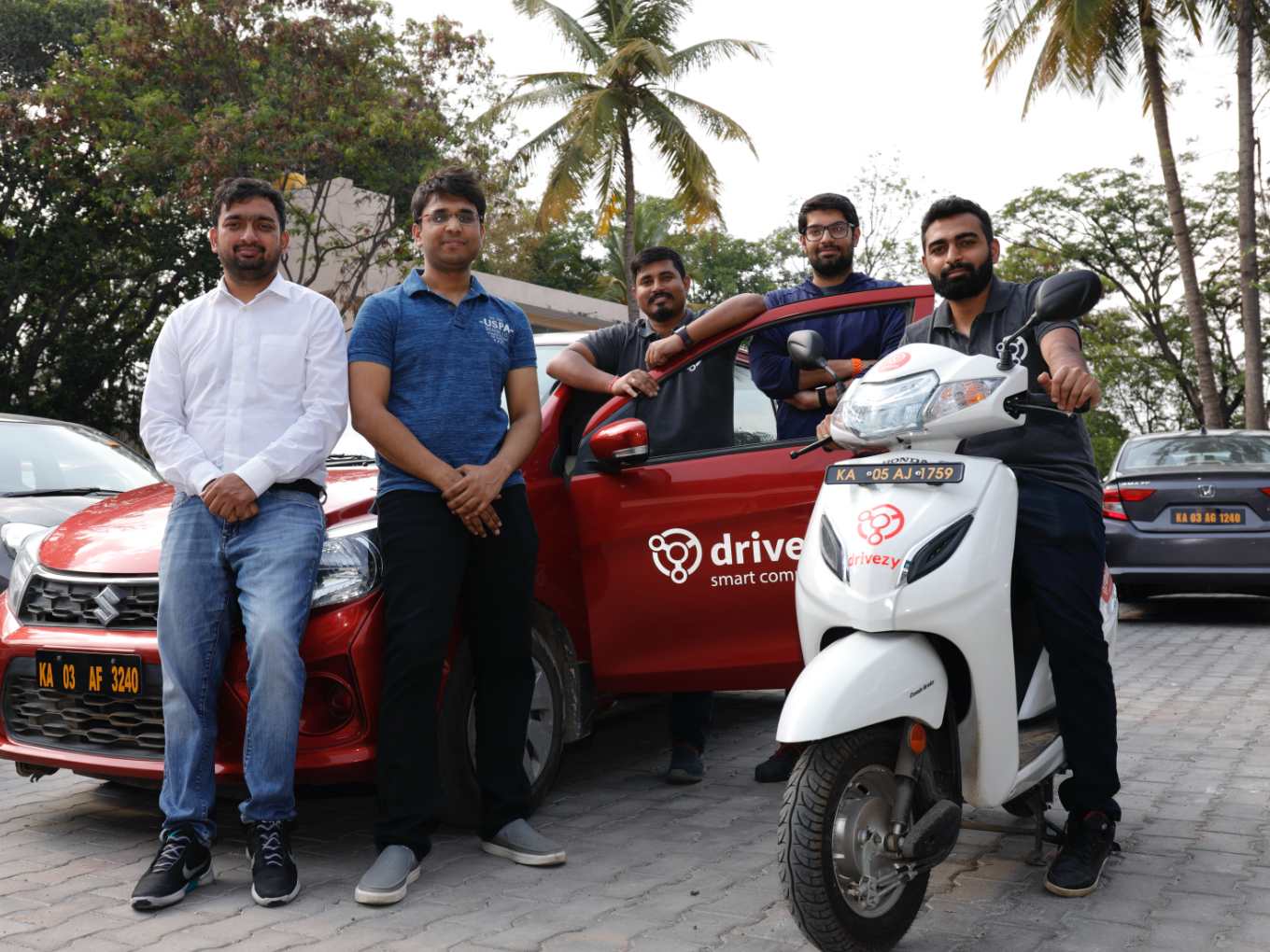 To bounce back, founders decided to conserve cash and gave up salaries for a year from March 2018

After bouncing back, Drivezy is close to finalising a major funding round in early April 2020

After four years of starting up, vehicle sharing startup Drivezy went through its toughest phase, often called ‘valley of death’, in reference to the phase when startups find it extremely difficult to cover the negative cash flow, usually occurring in the seed stage. The vehicle-sharing startup did practically everything, including founders sacrificing their salaries, multiple pivots, looking for mergers and acquisitions deals and rethinking the business model, to decrease cash burn quite significantly.

In March 2019, SoftBank and ecommerce giant Amazon were reportedly in talks to lead a $100 Mn (INR 690 Cr) equity financing round in the startup for Series C fundraiser. However, the Bengaluru-based startup was unable to close the round. The multiple investors that Drivezy was in talks with had said that the sector in India is still at a nascent stage with no clear winner at the moment.

“The SoftBank deal in March 2019 was a Quasi term sheet. Since they made no investments in India in 2019, we split our 100 Mn round into 2 rounds,” said Ashwarya Pratap Singh, cofounder, Drivezy.

This prompted the startup to have early talks with several players. According to Inc42 sources, the startup was approached by Bounce, Zoomcar for different mergers and acquisition proposals. “However, we reached that stage where we realised what we were doing was significant. Later we validated that. We didn’t go ahead with the M&A proposals,” Singh said.

After that incident, Drivezy particularly focussed on strong unit economics and fundamentals and somehow finding ways to reduce burn and become operationally more efficient. As a result, the founders began exploring alternatives that would help them boost market share which at the time was around 35%.

Then came the second phase, which was the idea to franchise existing locations. That was the ideal thing to do to cut down the cost of expansion and reduce all operational costs to zero. In this model, the micro-entrepreneurs took control of the local units and operational challenges like downtime. “By December 2019 we were able to contain the cost by more than 30% and total revenue increased 2.8x,” Singh said.

The founders also decided that it was fair to not take a salary and conserve cash. So from March 2018 to March 2019, they decided not to draw their salaries and come down on the cost-cutting side. That helped our burn decrease quite significantly.

Drivezy was founded in April 2015 by Ashwarya Pratap Singh and his friends Hemant Kumar Sah, Vasant Verma, Amit Sahu, Abhishek Mahajan as a car-sharing service after realising the potential of vehicle sharing in India. Today, the startup has a fleet of over 17K cars, motorcycles and scooters, covering more than 250 locations in 11 cities. In 2019, Drivezy commenced car-sharing services in San Francisco, becoming the first and only Indian vehicle sharing platform to begin operations in the USA. According to Inc42 sources, the startup will be closing a major round in early April 2020. 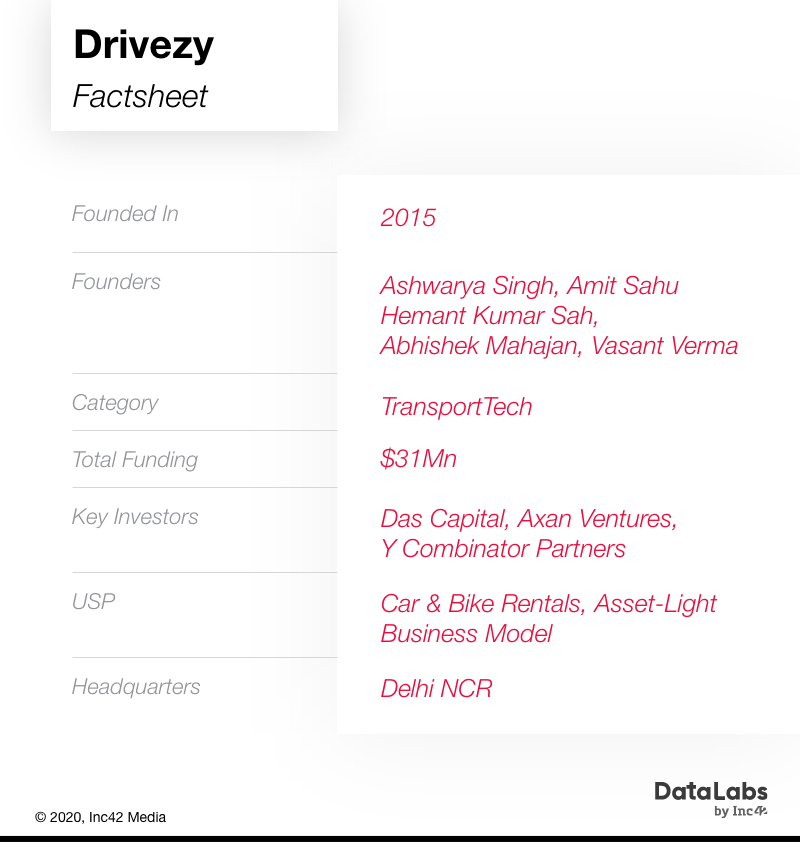 Today, Drivezy has 23 franchise locations in five cities and that right now constitutes 32% of total monthly revenue coming in from that particular space. It aims to convert all existing locations into franchise-operated units by the end of the year. The startup has also partnered with OYO to enjoy a significant advantage that will help the company consolidate market share to 50% in the coming months.

Drivezy’s journey goes back to 2014 when Ashwarya and his friends realised that Indians, youngsters, in particular, were not searching for ownership patterns. They are willing to pay for on-demand products including short term and long term rentals. Average middle-class families who could afford cars also had two-wheelers. “That was a surprising finding. We realised that families that had a Maruti 800 or Zen would not use it for shorter distances, within 10 Km. When the distance was more than that or involved more than two people, a car was preferred. Car is that way still a group activity,” he said.

Additionally, once a consumer uses two-wheelers more than five times, the aspiration for car kicks in. And in cities with erratic weather conditions and pollution cars are often rented out. This led to the conception of JustRide (Drivezy was earlier called JustRide). The founders shared a common love for entrepreneurship and worked hard for a year to refine the idea before commencing operations in 2015.

There was also another pivotal incident that led to the conception of JustRide. Ashwarya’s brand-new Ford Figo met with an unfortunate accident and this is when he saw the opportunity for car rentals in India. “I barely used my car for more than an hour a day and I spent a good part of my salary to maintain the vehicle. The accident made me realise that a lot of people my age might be going through the same conundrum,” he said.

Drivezy (formerly JustRide) was initially under the aggregator model where people could hire cars and motorcycles from people around them. “When we launched JustRide in 2015, the concept of carsharing in India was nothing more than a laughable idea,” he said. According to the startup, handing over possession of something as privy as your car to a stranger even for a few hours, let alone days at a stretch was preposterous back then.

In November 2015, however, the startup raised funding of $2 Mn. Before that, it had raised an undisclosed amount of angel funding from industry veterans like Alok Mittal, Zishaan Hayath, Niraj Singh, Nikunj Jain, among others in August 2015.

The startup then focused on building a self-drive car rental service and were successful to an extent. The platform was sold out almost every weekend but adding new cars was difficult. As the funds were limited, purchasing cars was out of the question. So, the startup had leased around 250 cars but that too proved expensive.

In March 2016, the startup raised $400K in Pre-Series A round of funding from a group of angel investors. Additionally, Google selected Justride for its Launchpad accelerator and the company was again selected by Y Combinator for summer 2016. 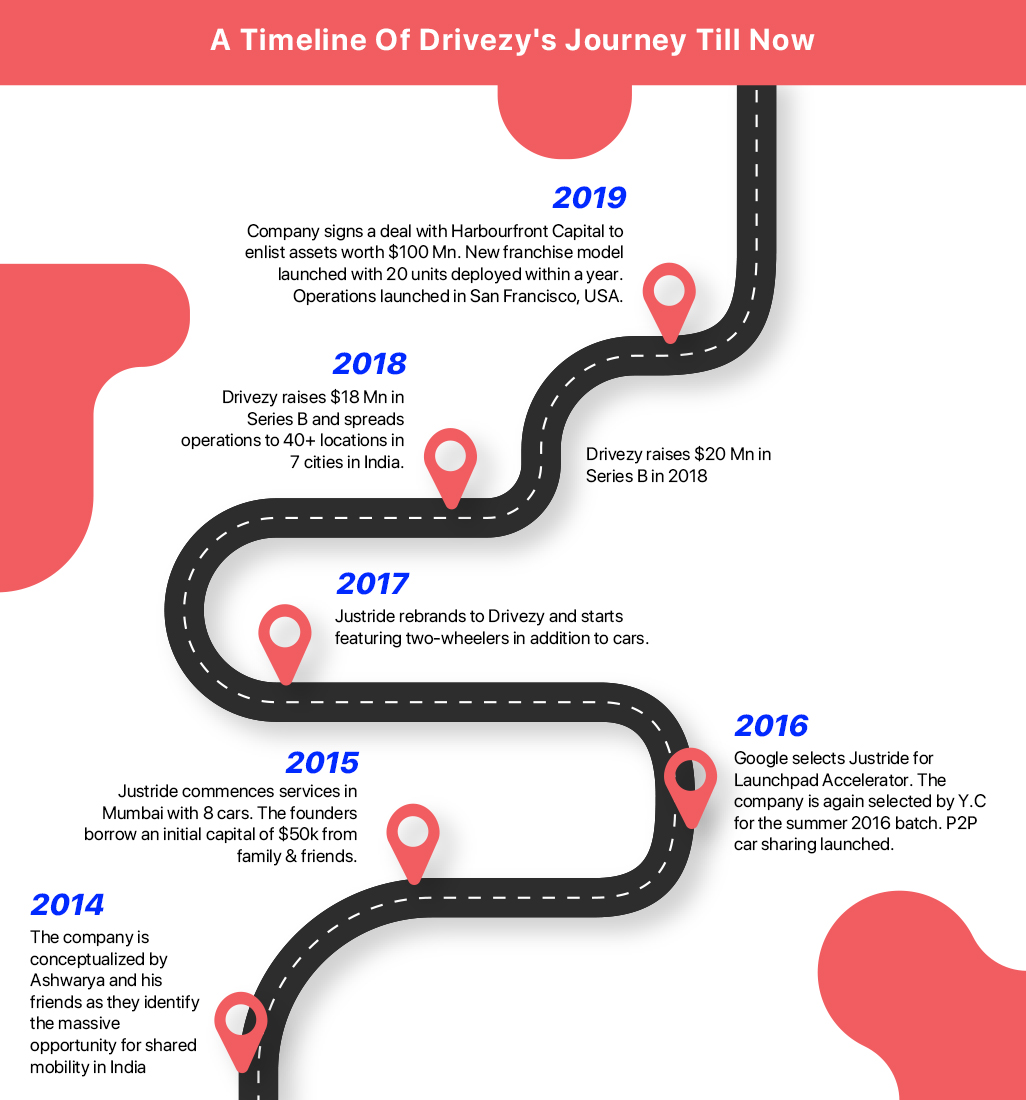 The same year, the startup toyed with the idea of building a marketplace where individual owners could list their idle vehicles. The platform was rolled out in Bangalore, Mumbai and Pune. “A lot of owners we met were unwilling to trust strangers with their cars. Addressing the mental block took us a good six months but we trudged along. Now of course, with the sharing economy being at the forefront, thanks to the efforts of companies like Airbnb, Uber and Ola, people are much more at ease in sharing their cars with strangers,” Singh told us.

That’s when the company shifted to a car-sharing marketplace from an aggregator-based model. The marketplace model was like Airbnb of cars, growing on both the demand and supply side. In 2017, Justride rebranded to Drivezy and started featuring two-wheelers in addition to cars.

In November 2018, Drivezy raised $20 Mn in Series B, led by existing investor Das Capital, and spread operations to more than 40 locations in 7 cities in India. Drivezy secured $100 Mn in an asset financing deal using which the company planned to induct over 50K vehicles. The funds were to be used over three years, through Harbourfront Capital, a Special Purpose Vehicle. Additionally, the financing mechanism was handled by Tokyo-based Anypay Inc., an early investor in Drivezy.

Ride To The Right Fit

The peer-to-peer supply channel accounts for more than 70% of the cars and around 29% of the two-wheelers (motorcycles and scooters) listed on the platform. Individual owners and commercial players like automobile dealerships enlist idle inventory on a revenue-sharing basis. Through the asset financing channel, the company partners with institutional investors who purchase and list assets on the company’s platform through special-purpose vehicles (SPV’s).

For an investment of $100K, the franchisee manages the unit for a tenure of three years. During this period, Drivezy leases assets worth $590K to the unit. The franchise generates revenue by renting the assets to customers and handles all operations and associated manpower. The franchisee also pays a revenue share to Drivezy for every successful booking. At the end of the 3-year tenure, the franchisee is entitled to the salvage value of the assets, post appropriate depreciation.

According to a World Bank 2018 report, on average $5.5 is spent every day by an average Indian and 33 % of that spend is on mobility needs which covers 6 trips every day, including last-mile transport. “This is when we realised that with rentals, we could bring down overall spending on daily commute by 30%. We thought of a greater problem to solve. We expanded to two-wheelers from 2017,” Singh said.

Understanding the unit economics, accepting the fault and revisiting the business model, helped the company get through the tough time and today the company has an edge over its competitors who conventionally depend on a single channel to list vehicles on their respective platforms.