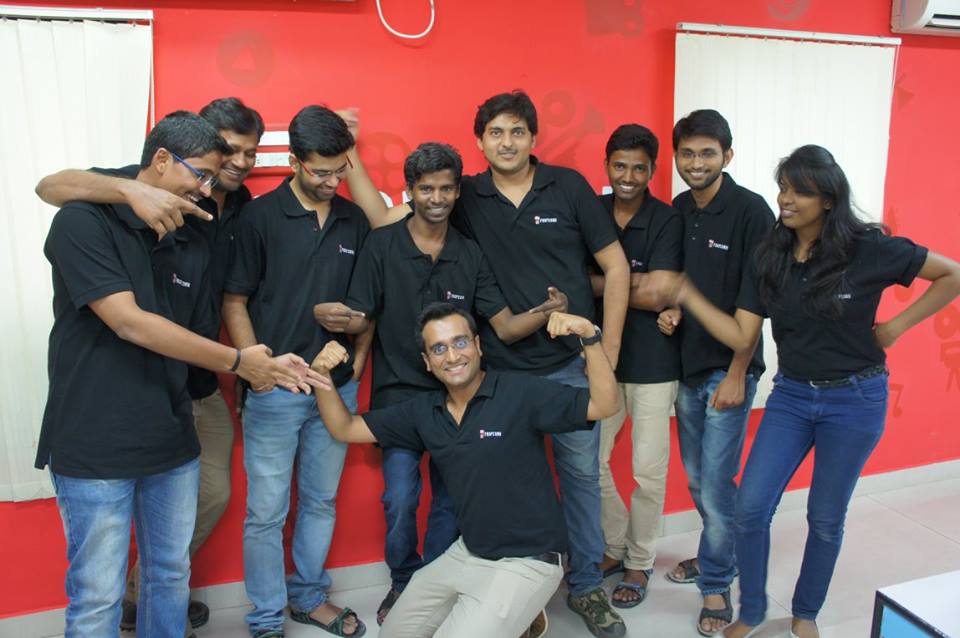 How many times have you waited at the airport, wishing you did not have to burn away at your internet data to kill time and entertain yourself? Or even during the flight, hoping you had something else to do besides sleeping and eating. Or have endured those hours of train and bus journeys, where your solace was either a book or food or sleep. But as they say, “What we are waiting for is not as important as what happens to us while we are waiting.” It was during one of such train journeys from Hyderabad to Mumbai, Karthik Poddar and Kartik Bansal thought of building something which would bring in  video entertainment right to the user’s device and solve the pain point of waiting.

Thus was born the idea of Fropcorn, a hyper-local content distribution venture focused on travel entertainment. Or to simply put, a video on demand solution for the masses on the go, which is independent of internet connectivity. Because the duo were clear that given the expensive data plans available and the patchy 3G connectivity, the solution had to be absolutely independent of internet connectivity. To test the concept, Fropcorn provided tablets with pre-loaded content to commuters for a rent of INR 100 in December 2014 at the Hyderabad airport. The commuters could watch the content on the flight and then drop it off at the destination airport. While 3 out of 10 people wanted the tablet, the rest requested them why not load the content to their own devices and save them the hassle of carrying the tablet.

Hence, Fropcorn went forward with the Bring Your Own Device (BYOD) model, enabling users to access content without internet/data connectivity through its technology, powered by content deals with leading production houses and strategic partnerships with airports, railways, healthcare and hospitality chains. By deploying its location-caching technology at travel locations like buses, airports and waiting zones, Fropcorn users can watch a wide range of Movies and TV Shows on their Wi-Fi-enabled device without the need for any internet / 3G connections. With over 3000 hours of content in its library, Fropcorn works with leading content studios and brings world class entertainment to people on the go.

Today, it is launching its services at Rajiv Gandhi International Airport (RGIA) Hyderabad, making it a first-in-Asia where an airport will provide its users on-demand entertainment. Fropcorn’s entertainment-on-demand service will enable passengers to download a movie of their choice within 3 minutes and watch it on the flight. Flyers would be able to choose from over 200 HD quality movies and can download the entire film in less than three minutes on superior-grade Wi-Fi servers set up at the airport. The entertainment WiFi hotspot is currently available at the Security Hold Area of the Domestic Terminal, which shall soon be extended to other parts of the airport.

At GHIAL, we strive to offer our flyers a stress free and enjoyable journey experience. We understand entertainment is a great way to keep them engaged on the flight journey as they have limited or no entertainment options.   With Fropcorn entertainment  hotspot,  we  now  extend  the  GHIAL  experience  even  beyond the airport premises and ensure our flyers have a great time throughout the journey. We expect this to be a wow experience for both the flyers and the airlines and shall further  augment  Hyderabad  airport’s status as a preferred Gateway for South & Central India.

Founders Kartik Poddar (CEO) and Kartik Bansal (CTO) have known each other for the last 13 years, since they did their under-graduation together at Sardar Patel College of Engineering. They have also been joined by Ayush Ahuja from the same college who is now the Business Head of Fropcorn. The startup was also a part of the first batch of the GenNext Innovation Hub, an accelerator by Reliance and Microsoft. Based out of Mumbai, currently, Fropcorn is a 20-member team with in-house teams for native apps, hardware, DRM & Software, content licensing and business partnerships.

In order to understand the product more, we need to understand its three aspects-the technology, the content partnership, and the distribution partnership. In layman’s words, Fropcorn enables users to download or access content at incredibly faster speeds without burning away at their data plans. A user just needs to download the application, connect to the Fropcorn hotspot, and enjoy access to unlimited good quality content.

To enable the Fropcorn Wi-Fi, the startup has internally designed servers called Minions. These Minions assembled in India, set up a Wi-Fi hotspot called Fropcorn movie, to which the user will connect to in order to access the content library by downloading the Fropcorn app from the playstore. In case he hasn’t downloaded the app, the Wi-Fi will sideload the app to the user’s device when he connects with it for the first time.

Coming to the content partnership part, Fropcorn has tied up with leading studios like Yash Raj, Sun TV, Reliance, and others to being the best of entertainment to travellers. This content is directly procured from these production houses through a legal partnership in order to ensure its protection and save it from piracy. Thus through digital rights management solution, the content available on Fropcorn only plays on the Fropcorn app, and can’t be hacked to ensure its protection. The user has the option to either download it or stream it. The app enables buffer free streaming for the users, thus adding to the quality of the experience. The version one of the app took 12-14 minutes to download a full length movie while the 3rd version makes it possible to do under 3 minutes! After downloading the content, one can watch it any number of times in the next 48 hours. 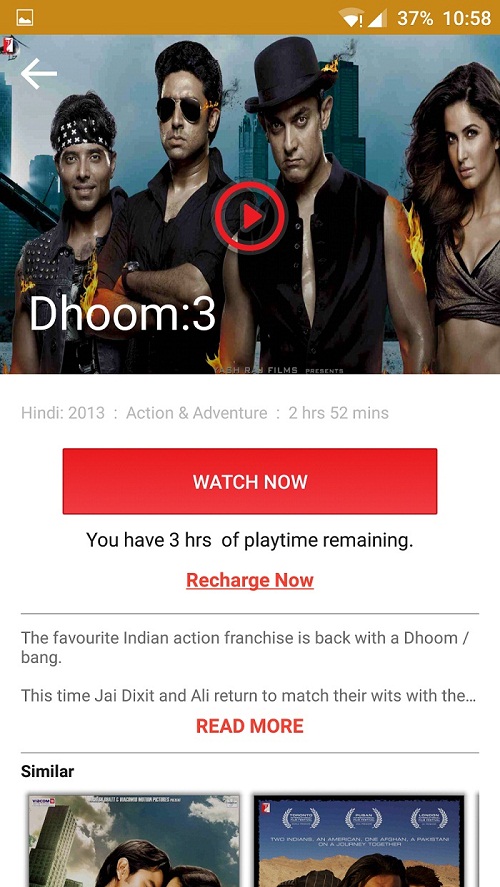 In the enterprise deployment, where a Wi-Fi network already exists such as airports, hospitals, and hotels etc., one simply has to plug in the server in the existing network and configure it, and it readily becomes available everywhere on the entire network. In this configuration, it can support a larger number of users.

Fropcorn’s main target audience consists of people on the move such as professionals, students, travellers, predominantly in the age of 18-34 years. The targeted segment would normally be comfortable using apps, and carry electronic devices, and looking to consume content on the go without burning away their mobile data packets. These people would be ready to consume good content while waiting for their flights, trains, and buses, and also during the transit time.

The startup aims to monetize the pain point of viewing content, as consumers will be willing to consume such data in order to avoid the boredom while using  buses, airports, and railway stations. Hence it has rolled out a premium model for the consumers, wherein the first 30 minutes of content is free on the app. Post that the users can upgrade their plan and can get unlimited access to the library. Thus 4 hours of content will be charged INR 30 while for an 8 hour bus journey, it will be charged at INR 50. Additionally, in the download model, one pays for the download and can view it number of times. The download model pricing varies from environment to environment and will be priced between INR 80 – INR 100. Ayush adds that about 10-12% of free users have now converted to paid users.

The startup raised a small angel round of funding in March 2015 in order to get the product ready, to go live at two airports, and take a crack at the inter bus market. It has already entered into agreements with two of the five airports targeted and is live in 100 buses. In the next six months, it plans to reach 10 airports and increase its bus pipeline to 300 buses. Additionally, it has also entered into a contract with the IRCTC for deploying Fropcorn servers in the 60 lounges the IRCTC plans to launch by then of 2016. Also on the cards is further product development, hence Fropcorn is aiming to raise its Series A round in the future soon as it pursues expansion aggressively.

Post launching the second version of the app in October 2015, Fropcorn has seen 2,500 direct downloads in addition to the undisclosed number of users to whose devices the app was sideloaded.  The key metric tracked which is hours of content watched on the app has increased 8 times in the October-January period. As this metric grows from 25-30% on a month-on-month basis, Fropcorn believes that the launch at the Hyderabad airport will be a further big boost to it. Nearly 10,000 + commuters check in everyday at the airport and Fropcorn is hopeful of leveraging this number in a big way. Added to that the fact that the startup will be adding four more airports to its repertoire in the next two months, traction is expected to go up in a big way this year. 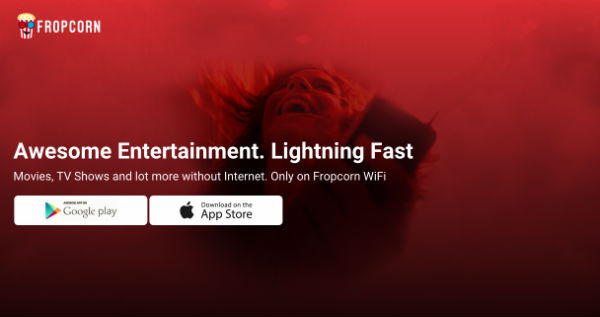 The growing video on demand market has seen the entry of many players in this segment. OTT players like Hotstar, Spuul, Yupp TV, Bigflix, Hooq, are startups which deliver content over data plans. However Fropcorn believes that people who are on the move don’t prefer paying for content on expensive data plans. Hence with its legal content and approach of only going after the mass market on the move, it will be able to differentiate itself from the handful of players in this segment.

Another close competitor is Delhi-based startup PressPlay which launched its PressPlay TV hotspot network in September last year. The company had raised has raised $2.2 Mn (over INR 13 Cr.) in seed funding from Sequoia Capital and a few angel investors last year in August and prior to that it had raised $500K. PressPlay had also started off by renting-out tablets with pre-loaded content for INR 100 to bus passengers. Later, it pivoted to launch Wi-Fi services on buses wherein the users can access entertainment content on their own Wi-Fi connected devices. PressPlay’s app comes loaded with about 30 movies, 1,000 songs and 10 documentaries & cartoons as well. Its app which is currently on android consists of different category-based channels.

As of September last year, PressPlay had 500k users per month on the network and more than 2000 hotspots across the country. The company is aiming to hit 10,000 hotspots.

2016 is also the year when the big daddy of video streaming i.e. Netflix launched in India, with plans starting from INR 500. Fropcorn however believes that its plans beginning from INR500, Netflix is going after super premium consumers and is more geared towards main consumption through TV, while Fropcorn’s focus is mainly on the mass market on the move.

Netflix’s entry in the country this year just validates the burgeoning digital content business in the country. The exponential growth in smartphones is fuelling video on demand and need for content anytime, anywhere without burning away expensive data plans. To cash on this need, Fropcorn in uniquely positioned to leverage the mass market on the move who wants content to reduce the pain of waiting at transit points. Added to that is the fact that India is mainly a very large low cost carrier market and most flights do not have in-flight entertainment. Thus by partnering with airports, Fropcorn is aiming to elevate the customer experience and making sure that every regular flier/ traveller has access to great quality content without consuming their data plans.

It will be interesting to watch how does it deliver on that front as it throws open the door to its service at the Hyderabad airport today, hoping to lure travellers with the highly attractive proposition of a downloading a full length movie under 3 minutes!