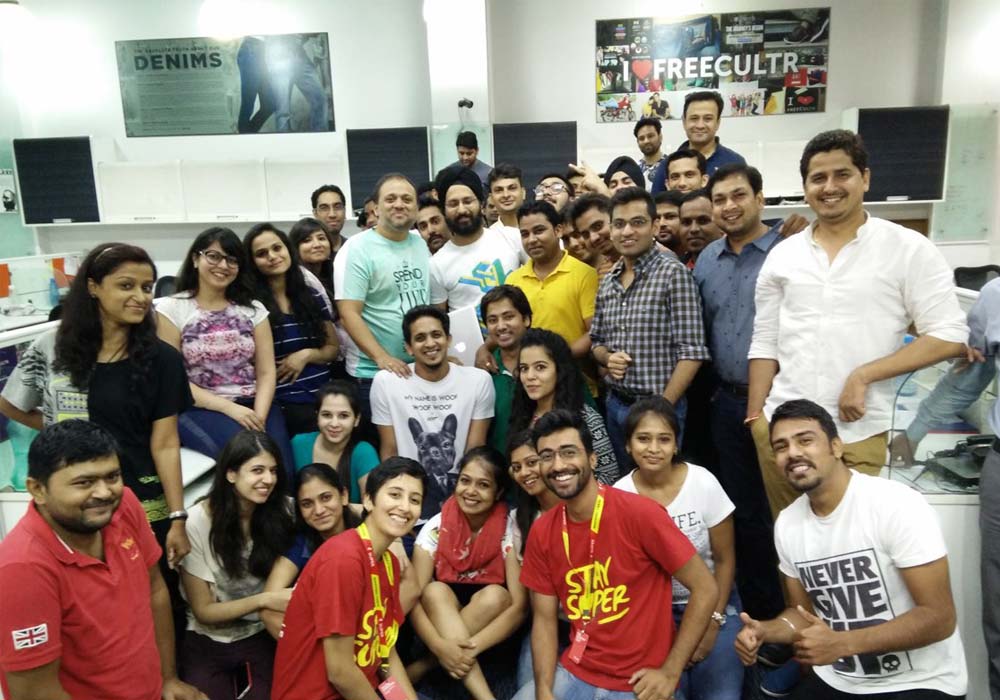 The brainchild of Sandeep Singh, Rajesh Naikar, Harish Bahl and  Sujal Shah (who moved out in 2013), FREECULTR was incubated by the Smile and Sequoia Capital as an e-com venture offering its own apparels brand online in 2011. FREECULTR introduced the concept of “Premium Basics” to India with a full lifestyle range of apparel and accessories for men and women.

The platform allows anyone to create and sell T-shirts through their very own personalized Tee-store and thereby monetize their creativity without going through the hassles of investing and building up an inventory. One has to login and upload the content that s/he wants to monetize, and with a simple tool, witness one’s creativity metamorphosize into a tangible product aka T-shirt. Thus earning from one’s own digital T-shirt store becomes a simplified process.

FREECULTR Express has made the process of creating a T-shirt very simple. The designer just has to log in, create a T-store, upload his designs, tag them and set his terms. The company will put a base cost on the T-shirt, which would include the designer’s cut, the cost of production and shipping and its margins. FREECULTR works on a zero inventory model. Hence, the designs will be manufactured and shipped only once a user places an order. The company delivers pan-India. 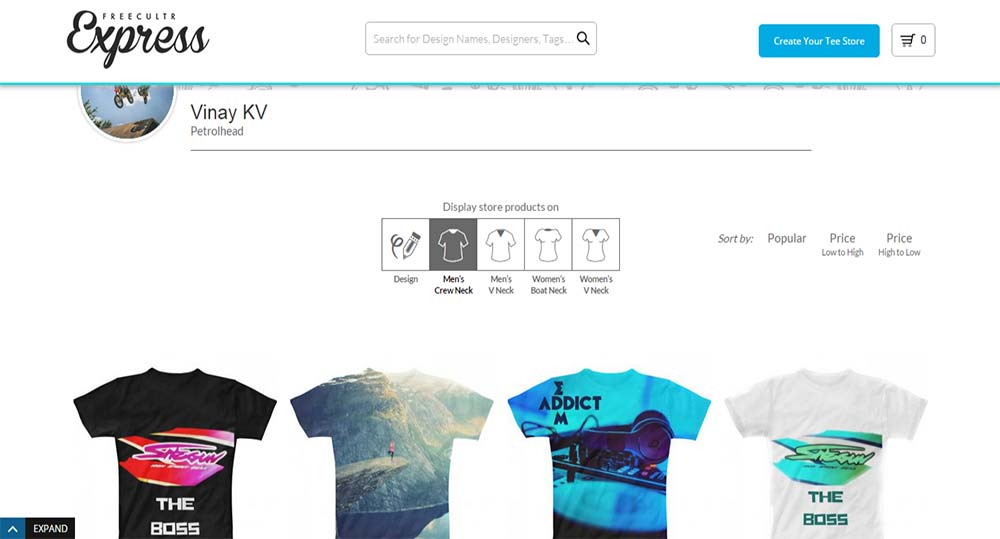 Sandeep says anyone who is a photographer, a graphic designer, an art designer, or maybe just an Instagram user can use the Freecultr platform to unleash his creativity and take it to the market place. He adds, “The idea is to make the process of creation very simple for a designer.” Meanwhile, as far as buyers are concerned, the platform is a gold mine for people looking to buy theme based T shirts.

The portal has more than 1 lakh designs of T-shirts. So as far as the buyer is concerned, the platform aims to make the process of discovery simple for him. He points out that brands operate on a seasonal model-the stocks they keep are season based while on FREECULTR, the emphasis in more on fresh, theme based designs.

Currently, it sells about 3,000 to 4,000 T-shirts a day, whose cost includes the designer’s cut, the cost of production and shipping, and the company’s margins. Currently, it has more than 10,000 active designers on its portal, with the total number of designers in the range of 20-30k. Since the launch of the platform in 2015, it has given out more than $152K (INR 10 Mn) to its designers in pay-outs.

The designer can price his design anywhere between $6-$13(INR400-INR 849). Freecultr charges a base price of INR $6( INR400) on every T-shirt. This covers the manufacturing, marketing, logistics and customer care costs, basically all the costs involved in selling a T-shirt.

By 2016, FREECULTR is targeting revenues of $24 Mn(INR 160 Cr) with sales of 3.1 Mn units. The company also aims to have an active designer base of 63,000 by 2016. The company’s first milestone was crossing the 10k designer mark. Also, the firm had started exporting its T-shirts to the Middle East markets and would also target more countries in the future. 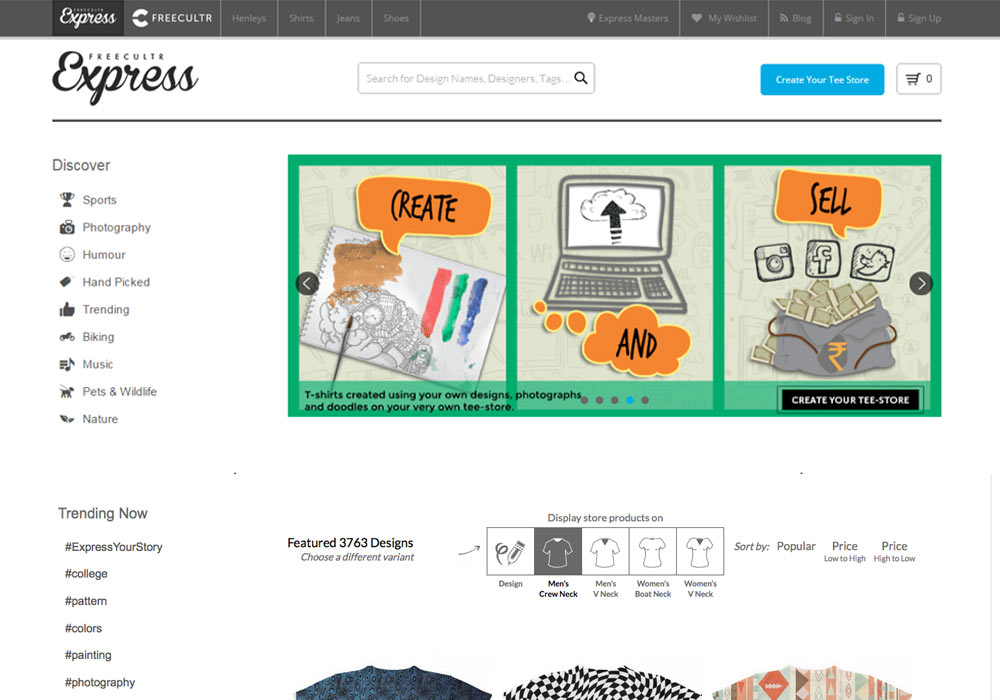 FREECULTR which has been incubated by the Smile Group and Sequoia Capital, had raised $4 Mn in funding from Sequoia Capital in 2011. In 2012, it was backed by another $9 million in Series B funding from Ru-net Holdings, founded by Russian billionaire Leonid Boguslavsky. The company has raised a total of more than $13 Mn in funding and is looking to raise more funds as it invests in the platform and technology.

From a crowd sourced design platform, FREECULTR Express aims to evolve into a full-fledged marketplace. The company will also be launching an app to facilitate the both designers and users. The firm will leverage more and more of technology to simplify the creation process, introduce more discovery tools for consumers, and build upon its supply chain to enable manufacturing in real time. Also, just from crowd sourcing designs for T-shirts, the firm will go beyond T-shirts to introduce a lot more products to target the apparel segment.

Though FREECULTR’s way of sourcing designs is unique, yet it faces competition from many such other marketplaces for designer merchandise created by artists. Prominent among them are Cupick.com, a social network for artists that allows them to merchandize their artwork, Postergully, Alma Mater and Bewakoof.com. Then there is Mumbai-based Paintcollar– another online platform for artists to share their artwork in form of products like t-shirts, mugs, phone cases and other variety of products. It raised its bridge round of funding last month. Cupick also closed a seed round of funding this July, raising $120k from a group of the US and Indian angel investors via TermSheet.io

Then there was also, Bluegape, which used to allow artists to upload their artwork on its platform but had to put a fullstop on the merchandising business due to copyright issues. On copyright issues, Sandeep had this to say, “We have a team that takes care of the initial design violations. They browse through the uploaded designs and pull off the designs which have copyright material in it. We also do not accept designs with religious, political content or content that may hurt someone’s sentiments. Post moderation from our end, after the design goes live, if someone sees a design which is not original and is copied from someone/ somewhere, the person can flag off the design stating the reason behind it, we then pull the design down.”

Similarly, it faces competition from many private labels and ecommerce giants operating in the T-shirt and apparel segment as well. Though FREECULTR partners with Flipkart, Snapdeal and the likes to market product under its name, but then it is not the only private label on their platform. Sandeep says the T-shirt market alone in India will grow to be $1.5 Bn market in the online space, so one can well imagine the competition in this segment. If one speaks of online fashion as a whole, that market is projected to be a $35 Bn opportunity in India in the next 4 years.It is already crowded with many new entrants making their foray into this space.

Also, web only private brands face immense competition and it’s not easy sustaining a private label in India’s burgeoning cut-throat ecommerce space. Gurgaon-based women’s fashion brand DoneByNone had shut down earlier this year pointing out to the fact that running an ecommerce business in India is not as easy it appears. Some like Inkfruit were snapped by bigger rivals such as Zovi. On the other side, there is Myntra which is launching more private labels as it sees increases in revenues from the same. Similarly, Yepme and Zovi are also holding their own in the market. Yepme recently, raked in $75 Mn in funding.

FREECULTR Express stands out with its unique way of sourcing fresh designs in T-shirts. It’s emphasis on theme based T-shirts also allows it to differentiate from the gamut of other fashion ecommerce players. However, the category itself is pretty competitive as can be seen with the concentration of other such online marketplaces for designer merchandise created by artists. Fashion space is a big pie of the ecommerce market in India, and currently, FREECULTR is just targeting a small section of it by concentrating in T-shirts. While the uniqueness of its designs is its forte, but for it to become a bigger brand, the width of its offerings in the future will be a deciding factor.