Founder Shashank Mehta claimed the company has seen 50% growth in sales from its native online platform, with 1 Lakh organic users through the campaign

Made on a shoestring budget, the campaign also resulted in The Whole Truth finally launching on Amazon thanks to consumer interest, after months of relying only on its native channels and retail sales

In 2012, when California-based men’s grooming startup ‘The Dollar Shave Club,’ launched its first-ever marketing video on YouTube ‘Our Blades Are F***ing Great,’ the message was clear and impactful. The brand took the US market by storm. The video not only went viral, but attracted millions of customers. Since then, the ‘less is more’ type of campaigns have become a go-to strategy for many companies not only in the US, but also in the Indian startup ecosystem with D2C brands trying to attract the creamy layer in the Indian urban market with their quirky experiments.

On the flipside, there are laid-back campaigns like Cred’s ‘not-everyone-gets-it’ approach, which apparently has been touted as the best campaign in the ongoing IPL 2020. Marketing experts claim that these low budget ads with big-name celebrities have no advertising agency behind them, but have managed to create a lot of buzz. Unlike DSC, Cred’s message is far from clear, but it drives curiosity to check out the app. Sometimes though curiosity is not enough, the messaging from ads and promotions has to drive adoption that is more permanent than downloading an app.

That’s what makes messaging and conveying the brand narrative so crucial in the D2C game, more so for FMCG brands that have to compete with a whole lot of solutions.

Having recently rebranded itself from ‘And Nothing Else‘ D2C FMCG brand The Whole Truth needed to do something to drive adoption for its new-look products. Talking about its first-ever ad campaign — called ‘Our Food Is Screwed —  the company said that the idea was about getting the message out there so that everyone gets it without taking any leaps.

The Whole Truth founder Shashank Mehta told Inc42 that the company was hugely inspired by the direct message of ‘The Dollar Shave Club’ ad. “While Dollar Shave Club busted the myth around expensive shaving blade companies, we actually wanted to do it for the entire food industry, and bust the myth around companies claiming to produce healthy food options in categories like juices, cookies and chocolates etc.”

Not hiring models for these ads was a conscious decision in keeping the message as the main focus. Hence, the founder himself took the lead. “When you do not have a beautiful face to look at, you will focus on the message and not on the person delivering it,” quipped Mehta.

Produced on a relatively shoestring budget INR 3.5 to 4 Lakh in collaboration with art studio Harkat Studios, the entire video was shot in the company’s production facility. As Mehta said, “everything was done inhouse, and there were no extras”.

The ‘Our Food Is Screwed’ ads resulted in 50% growth in sales, the founder claimed. Given that The Whole Truth was a native and pureplay D2C brand, this is huge, he added. Customers began searching for the products on ecommerce marketplaces too, even when they weren’t available on the platform. So finally, giving into this surge in marketplace demand, the company listed its product on Amazon two weeks ago. The startup is delivering close to 4000 units of protein bars on a daily basis.

“We got more than 1 Lakh organic user base without paying a penny for it,” – The Whole Truth founder Shashank Mehta. 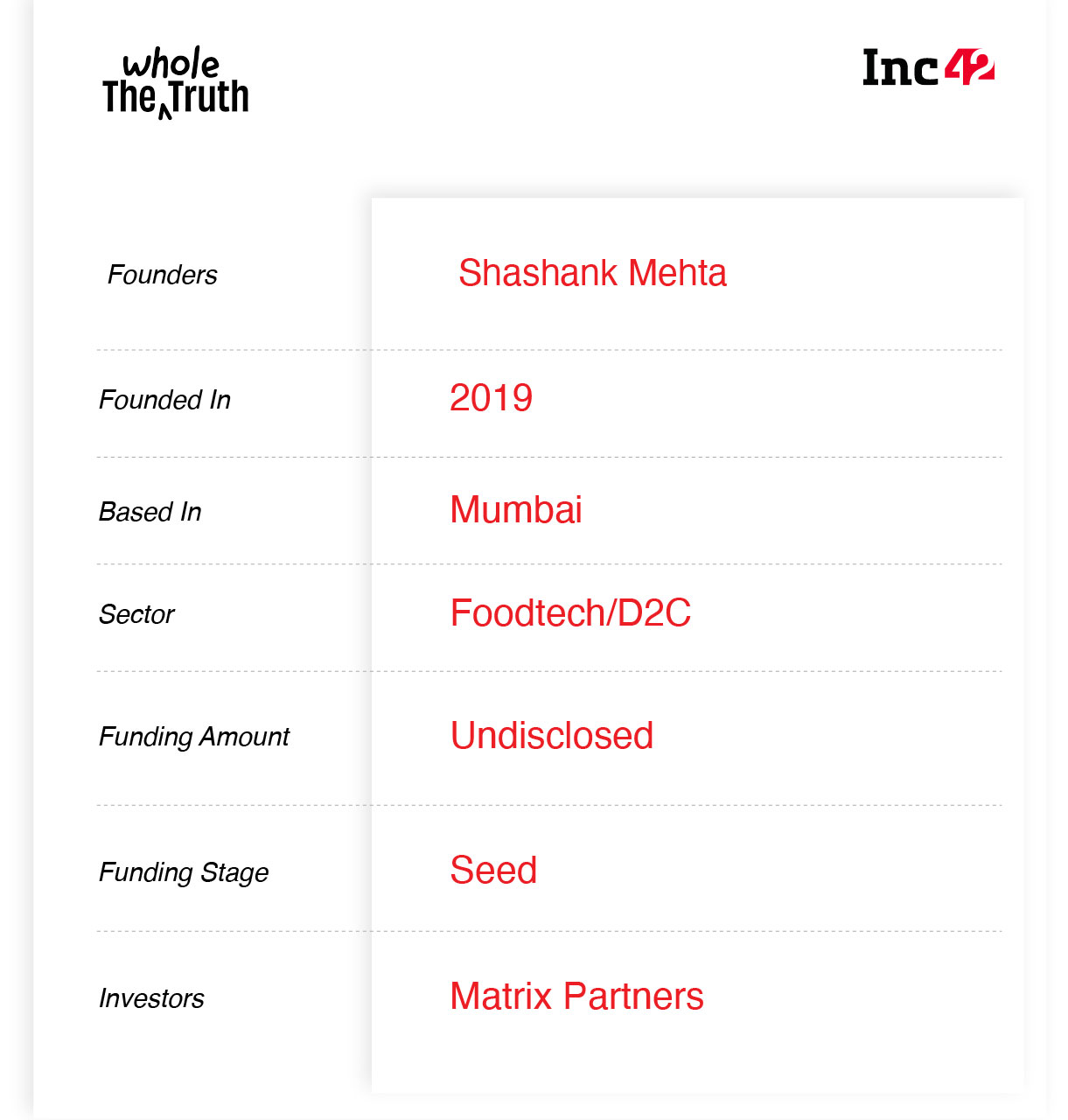 The Journey Of ‘And Nothing Else’ To ‘The Whole Truth’

Prior-to starting ‘The Whole Truth,’ Mehta was a marketing exec at Hindustan Unilever and entrepreneur-in-residence at Rebel Foods. In July 2019, he took the entrepreneurial plunge to start ‘And Nothing Else’ with a vision of busting food myths and inconvenient and misleading food labels. This was seen in the product design too — its protein bars mentioned just the ingredients used to make the product, and nothing else. That was the start.

With time, the founder realised that their mission was larger than revealing the true nature of food products. He believes that the entire ecosystem was skewed, right from labelling of the product, advertising, branding and the entire supply chain. “Our ‘And Nothing Else’ was just addressing one part of the problem, but we wanted to re-brand ourselves to solve the entire spectrum of problems.”

Its products are entirely manufactured and the operations managed from the same facility in Mumbai. “Initially, we did try to find partners, but then we realised that no one in the industry is good to make as clean a product as we make,” he added.

Besides The Whole Truth, some of the other FMCG D2C brands in the health snacks space including Forbidden Foods, Yogabars, Myprotein, Choko La, RiteBite, Rine, Eat Any Time among others.

According to food experts, any packaged food irrespective of companies claiming to be natural, organic and gluten free is not entirely so. Mehta added that consumers are only just waking up to the reality of the food industry and given the opportunity to rewrite the supply chain rules, ecommerce-first brands can disrupt categories more easily today. But that also means more competition.

“This is the best time to build a brand based on the truth because consumers are paying for the truth, and you can deliver the products to them directly,” he added.

The rebranding to The Whole Truth is linked to future expansion into other food areas. “We are clear if there is any category of food where we believe consumers are being lied to or being told half-truth about their food, we are going to launch products in that category and ensure it is tasty.”