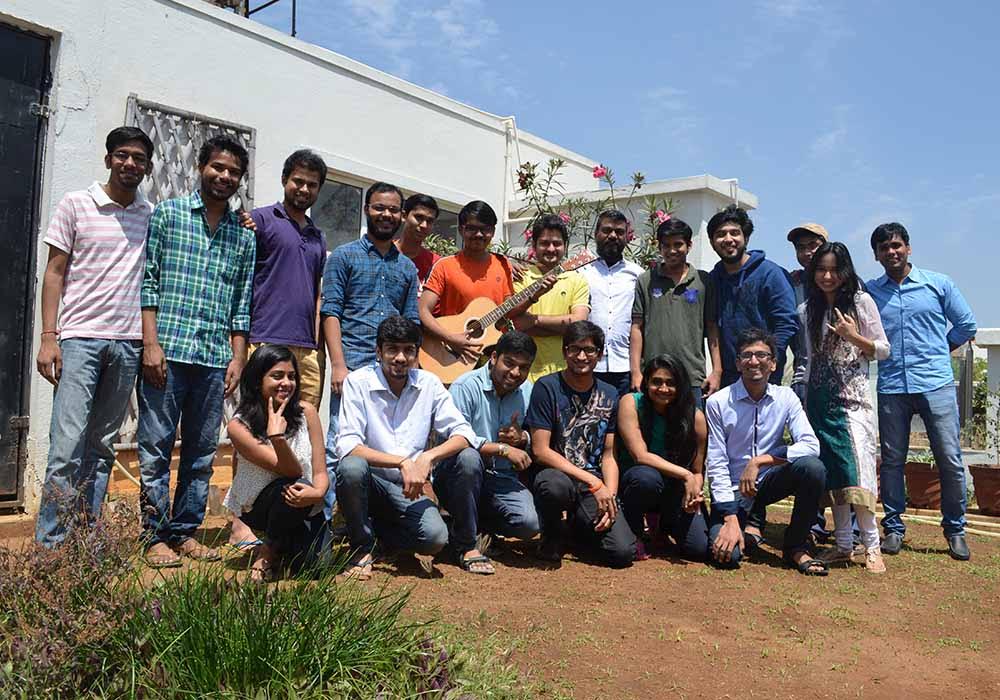 Say, a college student or young professional, with no savings or parents’ wealth to back her up, wants (or perhaps needs) to buy an aspirational gadget like Macbook Pro or iPhone 6s. But it’s highly possible that a bank will refuse to facilitate a loan to buy the same. And reasons behind that might range from having no CIBIL score* to having a low CIBIL score to the ticket size being too low for a bank to process.

Abhishek Garg, an IIT Delhi graduate who was working as a management consultant, faced a similar problem when he applied for a home loan in 2014. He was rejected by four banks, despite having a CIBIL score of 785. The reason cited was simple – he was too young to fit in the processes. That made him wonder how unaccessible would it be for others of his age group. It is this thought that triggered his entrepreneurial dreams.

His instinct got a major impetus when he met Riddhi Mittal through mutual friends. Riddhi, a Stanford University graduate, had previously worked at companies like Microsoft and Facebook. She wanted to use her expertise in machine learning and artificial intelligence to fuel her entrepreneurial dreams. They connected on a question that was bugging them – What was the last innovation that happened in banking?

Founded by Riddhi and Abhishek in September 2015, Matrix Partners-backed Finomena (a stylised wordplay on finance and phenomena) is a Bangalore-based fintech startup that uses alternate data sources and proprietary algorithms to evaluate credit-worthiness of borrowers.

Risk Assessment In Less Than 24 Hours!

A user can choose a device of her choice from sites like Flipkart, Amazon, etc. and paste the link on Finomena. After that she needs to sign up or sign with personal details. Subsequently, Finomena will ask for KYC (Know Your Customer) proofs like address, voter ID, and bank statements. Finomena claims to take less than 24 hours to risk-assess the applicant, after which the application is sent to their partner financial institutions and non-banking financial companies (NBFCs) for approval. Once approved, the partner organisation decides an interest rate and processes the request.

Applicants can be students, young professionals and, to some extent, self-employed people, who want small loans in the range of INR 5000 to 1 lakh for buying electronic devices (laptops, phones, etc).

Micro-loans space has always been there, but has prospered mostly through informal channels. People would borrow little sums of money from their friends and family. This space has never been served by formal systems because cost of operationally serving them through branch-led model is unprofitable. But now, technology can be leveraged to make these micro loans profitable. So, the whole process is needed to be brought into a formal fold.

Abhishek says, “India is a credit starved country. True financial inclusion will only come by use of mobile technology at mass scale. We believe we can use the power of machine learning algorithms and the digital footprint being created by each person today to evaluate their credit risk more holistically, thereby creating a win-win situation for the entire ecosystem.”

Finomena provide loans for a restricted use case of devices/consumer durables because the founders believe in productive credit. Says Abhishek, “I have personally seen the MFI market suffer the brunt in 2011-12 when I was working for BCG as a management consultant in their Financial Services Practice area. The whole industry went berserk giving consumption credit to people and suffered a massive correction, when RBI had to intervene and regulate the use case. Similarly, I believe there are some players in the market giving out microloans on perfumes, Steve Madden shoes, clothes to students and that’s the definition of bad credit to us.”

The unique proposition of Finomena prevents it from using any traditional risk models. Instead it uses big data-based risk and credit scoring. In other words, complex machine learning algorithms are used to risk assess the application, which can go upto 20,000 different data points for a single customer in the process. The data sources can vary from Google to Facebook to government sources.

Riddhi says, “More than 50% of Indians are less than 25 years of age, and the amount of exponentially increasing digital footprint that the smartphone-wielding young India today is leaving behind is phenomenal. Data is in plenty but it is also sparse, which means different people have different data points available.”

Direct: Given directly by the user in their application

Indirect: What can be procured about someone through the public web using our automated information extraction and retrieval algorithms at scale

Derived: When a clue in the other two sources makes us look harder in a certain unforeseen direction for more data, within the long tail

“We take a multitude of habits and behavioural signals into account, and in fact consider it our responsibility to educate our users correctly and transparently about what they’re getting into and whether or not they believe they can actually pay back the loan that they are applying for,” adds Riddhi.

Creating awareness among people about the product and credit scores is one of the few challenges the founders have faced. For instance, most of us are unaware of CIBIL score.

Secondly, being into credit lending, there is always the inherent problem of facing defaulters. Finomena believes in the saying ‘prevention is better than cure’. Riddhi says, “Better risk-assessment helps us to avoid having to deal with many defaulters. Better financial education to the students about how their credit score will get lowered should they not pay back, and how a lowered score will hinder any future loans being given to them, helps tremendously. We also track a multitude of behavioural signals and early warning indicators and reach out to our student customers in time, before it’s too late.”

In the traditional route, Finomena faces competition from established players like Bajaj Finserv, which provides loans of up to INR 5 lakhs for durables like LED TV, Mobiles, ACs, Laptops, etc. Besides, there are startups like Onemi, Red Carpet, Quicklo and Buddy which offers small ticket loans to students and others for similar kind of products. Apart from these, the online P2P lending market is also there. Traditional P2P lending has always been there in India, but mostly through informal channels. With the advent of online platforms like Faircent, i2i Funding, etc., it is getting a proper shape and might give Finomena and the like a run for their money.

And then there’s this other crop of startups like Creditmantri which provides all kind of credit analysis and facilitates loans.

Most of these startups resort to alternative data sources for risk assessment.

In March this year, Finomena raised an undisclosed amount of funding from Matrix Partners India. Other participants in this round included Kaushal Aggarwal, managing director and co-founder of Avendus, Harshvardhan Chamria of Magma Fincorp, and other leading entrepreneurs and angels.

The founders refused to disclose the commission it charges the partner financial institutions. Buddy, a competitor which works on a slightly different model, charges a commission of 3-10% from its ecommerce partners Amazon, Flipkart and Snapdeal. Buddy has recently raised a $500K Pre Series A round from Blume Ventures and Tracxn Labs.

Finomena is also planning to launch its offline dealer’s empowerment programme where they will provide tablets to laptop, phone and consumer durable dealers where customers can upload the documents at the stores only and get a loan in the offline store. Abhishek says, “We use only Aadhar biometric authentication at these stores to ensure complete compliance and no fraud on KYC norms.”

According to Gurgaon-based RedCarpet, the Indian market for loans to college students to buy consumer products is worth about $8 Bn. Whereas, Finomena estimates the same loan market for young professionals and self-employed people to be valued between $40 Bn and $50 Bn. So, according to Finomena, the total addressable market size for them is worth around $50-60 Bn.

Finomena has taken an innovative path in terms of loan repayments. Instead of the regular EMI schemes, Finomena has devised something called Flexible Monthly Instalment (FMI). So, a borrower can decide her monthly instalment, tenure and down payment according to her convenience. Finomena allows users to play with these three sliders and personalise their entire plan. 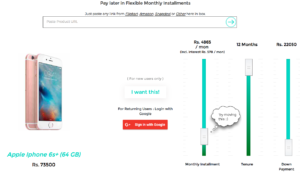 While the startup refused to disclose the number of loan application received due to NDAs, it says that the startup has seen 25K downloads of its Android app within three months of launching. Soon, it will launch an iOS app.

On the marketing aspect, Finomena runs highly targeted campaigns through social media. The startup has tied up with close to 50 stores where, it allows any consumer electronics store to start giving out devices on EMIs powered by Finomena. It aims to reach 1000 stores by this year-end. Apart from these sources, Finomena holds 1 hour credit literacy sessions (conducted by its in-house credit scoring expert team) in colleges and corporate campuses to bring awareness about credit score. They claims to get a lot of applications through these credit literacy sessions.

India’s youth population will surely profit from Finomena’s proposition. The amount of buzz these fintech startups are creating proves that the segment will see a lot of growth. But building awareness will be a challenge because the target audience is not financially sound. The growing competition might also help in spreading awareness and competition wouldn’t matter much because this segment is still a blue ocean. But one thing that we might need to talk about is the assessment method. Finomena’s (and other similar startups) approach creates an eccentric paradox, opening up a line of debate which we often avoid chartering into. 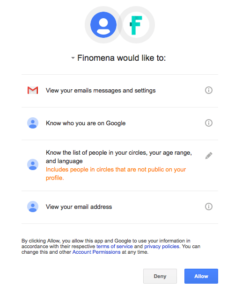 As part of its alternative assessment approach, these startups needs to use data secured from one’s digital footprint, which includes points like shopping habits, recharge habits, regularity in bill payments, information on social networking sites, etc. And from the looks (image above) of it, a user might even have to give access to her emails. (Mind you, most of this will happen with our consent only.)

While no one doubts the solemn intentions of Finomena and the like, privacy will be breached at some point or other. This gives us a point to talk on our digital rights. Most of us know about NSA’s PRISM surveillance programme and the related ballads of Edward Snowden. Maybe it’s time to deliberate on where to draw the line or decide if it’s fine if we don’t draw one.

*Established in 2000, Credit Information Bureau (India) Limited (or CIBIL) is India’s first credit information company. It collects and maintains credit records of individuals as well as commercial entities. This includes borrowing and payments related to loans and credit cards. A credit/CIBIL score is a three digit numeric summary of your entire credit history. It is prepared based on the information provided in your Credit Information Report. The credit score normally ranges between 300 to 900. So, if someone applies for a loan, her CIBIL score comes into play.

Update 1 (21:30, 10th June, 2016): After publishing the article we were approached by the Finomena team. They mentioned that the current product asks for the following details during desktop login. 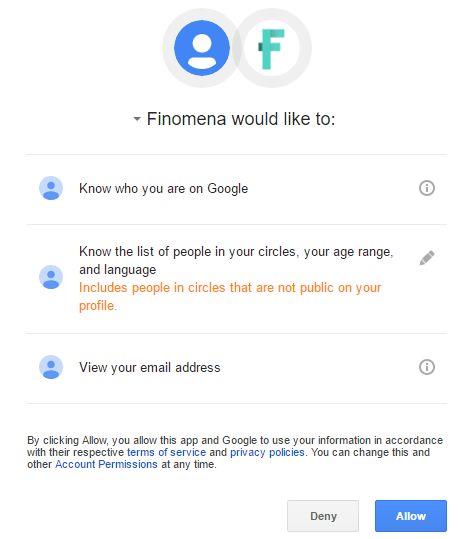 Finomena says that the screenshot in the Editor’s Note (taken about two weeks back) was taken when tests were being run for a new feature (to be launched in 2-3 months) that specifically views emails to just fetch bank statements. As seen above, the current product doesn’t ask for permissions to read emails.
facebooktwitterwhatsapp