We Are And Always Have Been A ‘Food On Demand’ Business: Jaydeep Barman, Co-founder, Faasos

We Are And Always Have Been A ‘Food On Demand’ Business: Jaydeep Barman, Co-founder, Faasos 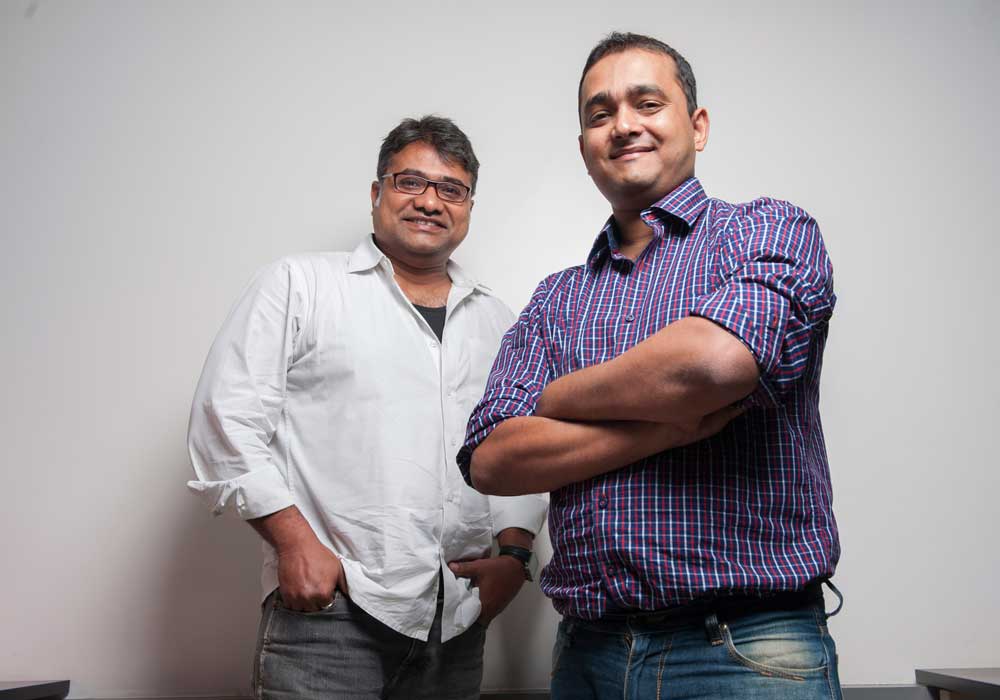 [Note: This article is part of The Junction Series. Jaydeep Barman will be speaking at “The Junction” in Jaipur in January 2017. Get a deep dive on foodtech and creating the art of food with him. Learn more about The Junction here!]

Having been inspired and disappointed by food all their lives – especially during their work travels across the globe – Jaydeep Barman and Kallol Banerjee, always imagined a virtual kitchen, where all their favourite dishes could be accessed at a moment’s notice.

This thought crystalised into a small outlet in Pune back in 2003. But it was not until 2010, that they left everything behind and started running Faasos as a business.

Like most startups, Faasos was created out of their own personal needs. It began on a piece of “tissue,” on  a drunken Saturday evening conversation about “How food in most places does not match up to Calcutta standards,” and how difficult it was to cook (or get food cooked) or get delivered the dishes that they craved for.

“Faasos was born with this goal – creating a “kitchen” – from where you can order and get all your favourite dishes delivered in no time. McKinsey was great, but then working on something that was very close to our hearts, always made sense. It was not a tough decision, to be honest,” says Jaydeep Barman, co-founder, Faasos.

Hiring For Passion, Entrepreneurship, And Ownership

For Jaydeep, leaving a high paid job to start something of his own and that too in the food sector, when he had never entered a kitchen in his life, was not an easy task. There were many roadblocks to this journey – out of which getting good people to run their expanding network was a big one.

He tried and failed miserably at getting talent from the F&B industry, as no one there understood stock options, bootstrapping, DNA and all the other startup jargon.

“Both Kallol and I can’t micromanage, which compounded the problem. But then, I guess, this lack of interest in micromanaging people gave birth to our now very successful hiring strategy of looking for people like us– people who hate being told what to do, are frustrated with spreadsheets and PPTs,  mostly missing good food and are willing to fight it out through thick and thin,” says Jaydeep.

Jaydeep had sent an email back in 2011 to all the e-groups of all the schools that Kallol and he had attended, asking for a letter of interest from people who wanted to build Faasos together with them.

“I did not ask for a CV, in fact, if someone sent one, it led to automatic rejection. I wanted to know why they wanted to do something as insane as Faasos, what made them capable of taking this on, what hidden agendas they had etc. I still remember the incredible response I got. We hired eight people (all in their 20’s). Six of them are still with us 4+ years on and this is the team that has built Faasos, they are more than co-founders,” he explains.

Once he tasted success, he institutionalised this hiring strategy for all levels. “We still do not spend any money on recruiting. We are always looking for people with the same traits – ownership, entrepreneurship, resourcefulness etc. And it has served us well,” he adds.

“We Are A Food On Demand Business”

“We are and always have been a “food-on-demand” business,” said Jaydeep. You look up a menu (earlier physically, now on an app), you order in minutes and you get the delivery as fast as possible.

“Because, we built a full-stack platform to cater to this (sourcing, producing, delivering the food ourselves), we became the first and probably the only vertically integrated food-tech business in the country at scale. People look at us and realise “foodtech is after all about food and not delivering food’,” he explained.

Claiming to serve around 15,000 customers every day, who order through the mobile app, it delivers varieties of delectable hot food – from wraps to rice and starters to desserts at the user’s doorstep.

Every startup has some milestone which leads them on the path of success. And for Jaydeep, the decision to go the ‘dark kitchen’ way was the turning point of Faasos’ startup journey. Witnessing significant traction on the mobile platform, the founding duo took this call in mid-2014, as they realised that many of their customers have actually not seen their physical outlets.

After the initial pilots showed no reduction in demand and significant savings in and better utilisation of costs, they went the whole hog and opened city after city without a visible outlet.

“We turned a significant corner in our business, as we could scale up much faster, focus much more on mobile as our primary source of orders and streamline our operations to a very significant extent,” he adds.

Web vs Mobile: Where Does Faasos’ Focus Lie?

With the surge in Internet and smartphone penetration, there was a time when every company wanted to switch to the app-only model. But with Myntra, the Indian fashion ecommerce marketplace taking a u-turn back towards its web version, companies soon realised that an app- only version won’t suffice if they want to survive for the long term.

Faasos also went through this turmoil. But today it has its presence on both web and mobile. Jaydeep informs us that it is mobile that rules the charts. “Mobile is 85% whereas web is 15%. Even in the web orders, 50% of the volume comes from mobile devices,” he adds.

In terms of focus, it offers a menu which changes based on customer location along with estimated time of delivery, which is on a real-time basis. Faasos has built this proprietary technology in-house and claims to be the world’s first food business to provide these features in real-time.

“The app allows us to collect data which we can further use to increase our customer engagement and offer personalisation of food menu based on specific likes and dislikes,” he says. With technology changing all the time, Faasos’ assures that it has they have a strong technology team that spends a significant amount of time cracking new technologies.

When it comes to investing in food startups, investors are not seeing any potential in them. The once flourishing food industry now seems to be going through a drought. Though companies like Zomato and Swiggy are trying to survive in the market, but even Zomato saw its billion-dollar valuation slashed in half in the month of May this year, whereas Swiggy surged its prices to stay in business.

Not only this, startup likes PepperTap, Bite Club, Cyberchef, Mealhopper shut down their operations during early 2016, following the closure of Foodpost, another startup which lasted barely for 6 months.

The food industry is not only seeing closures and slash in valuations, but startups like TastyKhana, one of the first who entered this business in India got acquired by Foodpanda in July 2014. But the biggest acquisition in the foodtech space happened when TinyOwl was acquired by Roadrunnr and has now been rebranded to Runnr.

Despite this, there are startups like Veeba, InnerChef, Sattviko, Box8 though with different models but mainly rooted in the food business, which raised investments over the last few months.

In such a bleak scenario, Faasos’ managed to secure $30 Mn (INR 200 Cr) funding from Russian Internet-focused investment firm ru-Net along with the participation of existing investors Sequoia Capital and Lightbox Ventures in the month of December last year.

Jaydeep believes that realisation of the fact that business is all about the long haul and strong fundamentals helped them to raise funds from the investors. Faasos’ always kept food at the centre of its universe and built technology around it. Not the other way round.

“We innovated continuously on many aspects of the business but never compromised on what goes into the food we make and kept quality paramount,” says Jaydeep.

Every day they claim to serve around 15,000 customers who order through our mobile app and this number is growing significantly every month.

“We never got sucked into a fund-raising frenzy and mostly did not get ahead of ourselves. We built the business one location at a time, kept our costs low, have always been capital efficient. We built, probably, the strongest team in the business, which in turn helped us scale across India without everything falling apart.”

Today, one can order from Faasos in nine cities of India: Gurugram, Bengaluru, Pune, Mumbai, Chennai, Indore, Ahmedabad, Baroda, and Hyderabad. None of the above strategies is actually path-breaking. But, put together, it resulted in a business that not only seems to have immense potential but is also strong in fundamentals and hence, very sustainable.

“We Have Managed To Build A Fundamentally Strong Internet-based Business”

In a funding deficient climate, when food startups are struggling to survive, Jaydeep believes that Faasos’ has a bright future. What makes him so confident?

The answer – it has managed to build a platform for sourcing, producing, finishing and delivering food (irrespective of genre and cuisine) at scale, across geographies.

Today, it is selling wraps, rice, meals and salads. Tomorrow it could expand to include other cuisines, according to Jaydeep. There is no limit to what it can offer on the platform. And this is because of the “dark kitchens” – so it doesn’t have to invest hugely in capex (capital expenditure) and opex (operating expense) to make that happen.

“We have the power of building lasting brands and the cost structure of a lean manufacturing and distribution. That’s what a fundamentally strong business set up on the Internet can do – realise the immense potential of the market while keeping the costs low. I am very confident that we are here for the long run and we will build a globally unique business in decades to come,” explains Jaydeep.

As he says, “We would be doubling our revenue this year again and should reach INR 150 Cr annualised gross sales (not GMV) by the end of this fiscal. We have just started to scratch the surface, and I don’t see any reason why our business will not grow 100% every year for the next few years.”

Currently, the foodtech industry is the most unpredictable sector. It has companies like Tiny Owl who have shut their operation whereas companies like Swiggy and Faasos have managed to rake in investors’ money.

Concludes Jaydeep, “Seeing this trend I believe companies like Faasos, Freshmenu, Holachef are full stack players who will always have higher gross margins to play with, but at the same time it will be more difficult to scale, as many aspects starting from distribution to production at scale to innovation in food will be important.”

This is not a “winner takes all” market and hence a number of long-term sustainable businesses can be born in this market. “Innovation along the entire food value chain will be key rather than only ordering / last mile technology. I personally feel this market will produce India’s first billion-dollar-plus revenue (not GMV) foodtech company.”

In a sector that is worth $65.4 Bn by 2018, the billion dollar question still remains unanswered, but Faasos’ – and others of its ilk – look to be well on their way to acing the test.