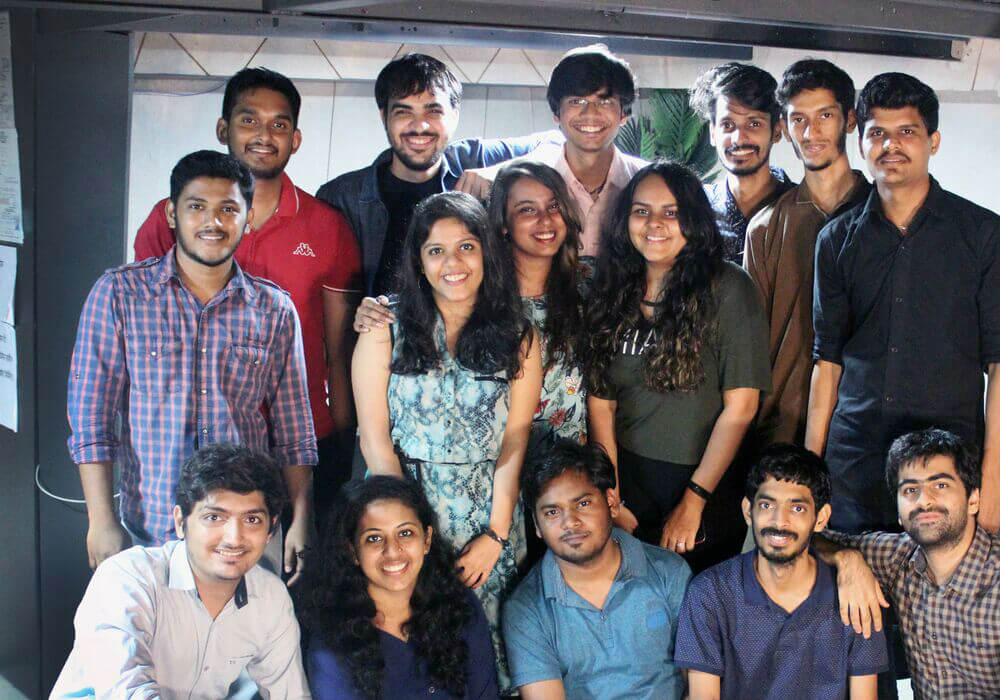 Picostone Will Utilise The Funding To Further Invest In Technology, Product Development, And Team Expansion

Launched in December 2016 by Jhaveri, Preeti Jain, and Niket Sarvaiya, Picostone is currently working on developing cost-effective technologies and devices to bring home automation to all classes of the Indian society, thereby making such solutions affordable for all.

As Jhaveri said, “Pico is 10 raise to the power minus twelve, which is extremely small, and stone means the device in mobility. So ideally, the devices are very small and are usually located in the same place; they don’t need to be moved. That’s the concept behind Picostone, which ultimately aims to lead automation to the stage of killing all switchboards and remotes.”

Picostone has two devices — Basic and Polar — at present, which are already becoming popular in 21 cities across the country. The founders are looking to utilise the latest round of funding to further invest in technology development, in moving deeper into the existing market, and in team expansion. 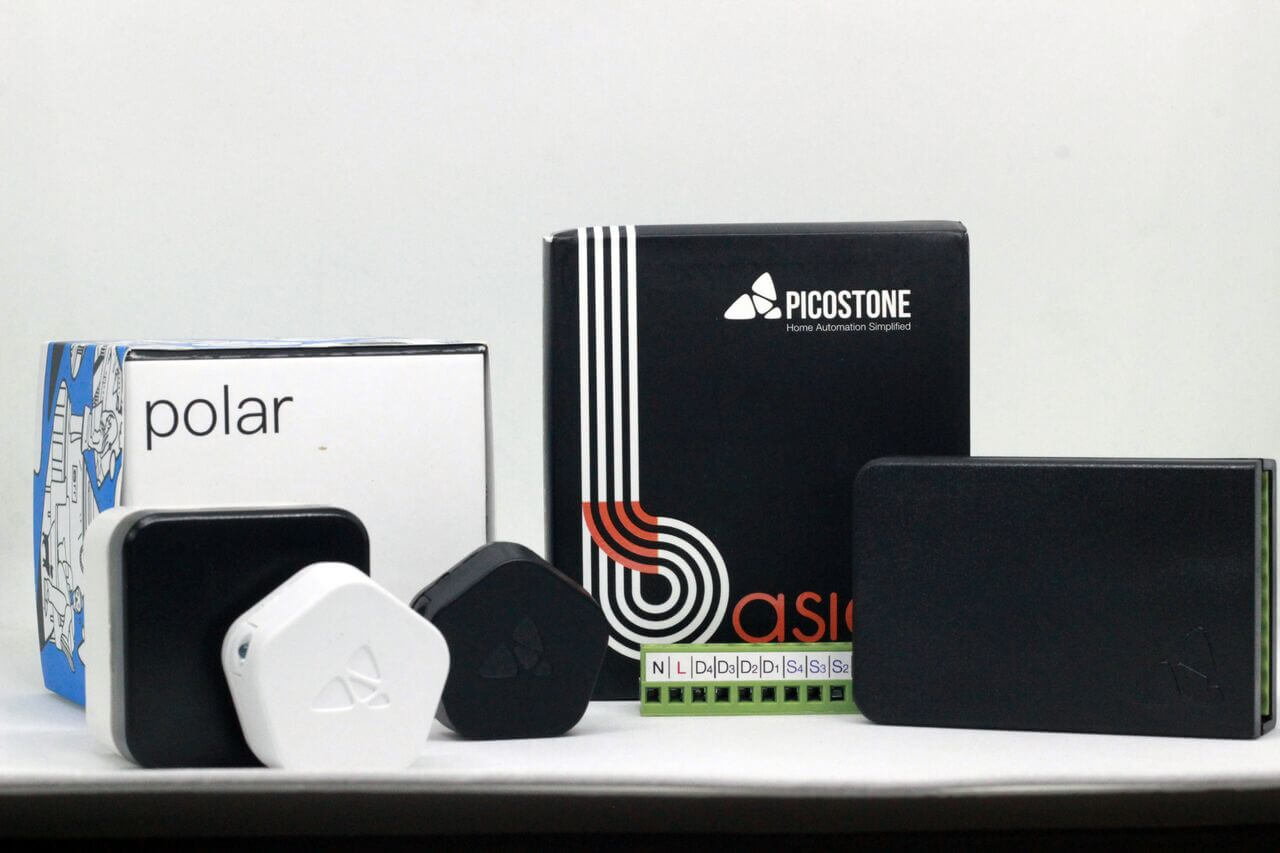 The foundation for Picostone was laid way back in October 2015 with a simple idea of automating rooms and making them more energy efficient. Jhaveri worked on the prototype for six months and then roped in his childhood friend Niket into the venture.

“I was from a tech background and he was from design. So, it was a very good amalgamation,” said Jhaveri. “After this, we met Nilesh Jain, who seeded us and joined the investor board. We then set up a commercial product chain in December 2016.”

With a team size of 22, Picostone is now primarily selling its products through its website; a majority of the sales happen through Facebook and Instagram. The founders claimed that the startup generated revenues of INR 1 Cr in the past year. It has a network of 18 dealer networks to distribute Picostone’s Basic product among 1,800 homes in 21 Indian cities.

Picostone products are priced so that they are affordable to the middle class to the upper middle class. The company is targeting techies who’re interested in new gadgets.

“Home automation is a very large market. Initially, we didn’t have enough information on how consumers behave in their homes and how we can make homes more energy efficient. But everybody has a smartphone now, so it makes it extremely convenient to have their entire home connected to the smartphone. Once you have the controls using machine learning and artificial intelligence, you can actually start saving energy,” said Jhaveri.

Here is a timeline on Picostone’s journey so far.

Basic from Picostone is a small WiFi-based device that fits right behind the switchboard and lets users operate lights and fans through their smartphones. Picostone Basic is also compatible with Amazon Alexa. 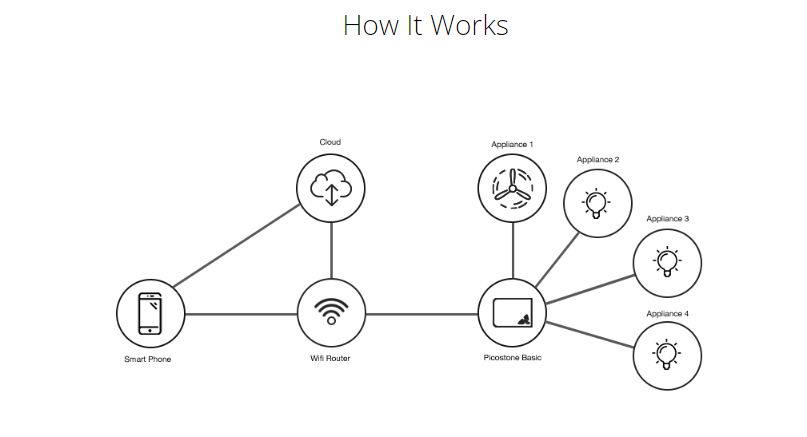 Polar, on the other hand, works well with air conditioners. It comes in a set of two:

The IR stone mimics the signal of a physical remote. It can change the AC temperature, fan speed, and mode. It works with any AC that has an IR remote control.

“So, our USP is Polar. It is really simple to install. You don’t need a specific air conditioner. Just plug the device, which comes in two parts. You can stick the smaller part on the AC and, voila, all your ACs are digital devices within minutes,” said Jhaveri.

Competition And Challenges Ahead

As Jhaveri said, the first challenge Picostone faced was hardware development. Making the product small enough to make it fit behind a switchboard was a difficult task.

“We spent time researching and developing the hardware in the early days. There was a bug that led to WiFi connectivity issues for large deployments (more than 100 devices) in a single area. We tackled that quickly and it gave us a lot of insights on our product development process, so we could eventually make it better,” he added.

In the market for almost two years now, Picostone competes with players such as Pert and Cubical as well as large players such as Lutron, Crestron, and ABB. Also, there is a rising clutch of startups in the home automation space of the likes of Hyderabad-based MIQASA and Bengaluru-based Silvan, among others.

Jhaveri believes that since the industry is 40 years old, large companies are focused on wired automation while Picostone is completely focused on wireless automation, which provided them an edge in the sector.

Emphasising on Picostone’s existing technology and product line, he added, “Our technology and unique product designs give us an edge over our competitors. Our products are designed to be installed by a regular electrician, which is a big advantage for scalability.”

He also believes that Picostone Polar solves the problem of controlling any IR devices without any line of sight, which is an advantage over all their competitors. “Our product and platform are scalable to integrate sensors into the system, which will enable automation of homes using artificial intelligence,” he added.

IoT startups are leading the home automation market with bigger companies following them either through investments, fundings, or acquisitions. As mentioned, the space is set to witness $6 Tn worth of investments globally between 2015-2020. Indian startups, too, are being incubated by global players.

According to Zinnov, in India, 120 IoT startups had received over $169 Mn funding since 2006 till may 2017. Large investors that have created IoT-focused investment funds are Tiger Global Management, Blume Ventures, and Qualcomm Ventures.

According to a report by Research and Markets, the Indian home automation market is projected to cross the figure of $4.3 Bn (INR 30K Cr) by 2022.  The report added that at present, residential customers have the highest market share, whereas, in the product category, the security market is the clear winner.

Also, Delhi-NCR, Mumbai, Pune, Ahmedabad, and Bengaluru have a combined market share of more than 50% in the total home automation market.

Going ahead, the Picostone founders are devising technologies wherein they can integrate sensors into their existing product models and connect more devices.

“We are looking at the door-knock sensor, a motion sensor, and air quality to set up in homes. With further feedback and data analysis, we can trigger a lot of other devices and make homes completely automated and self-sustainable in the near future,” added Jhaveri.

It seems like a hi-tech home of the type of Iron Man Tony Stark is just a few years away from reality in India!