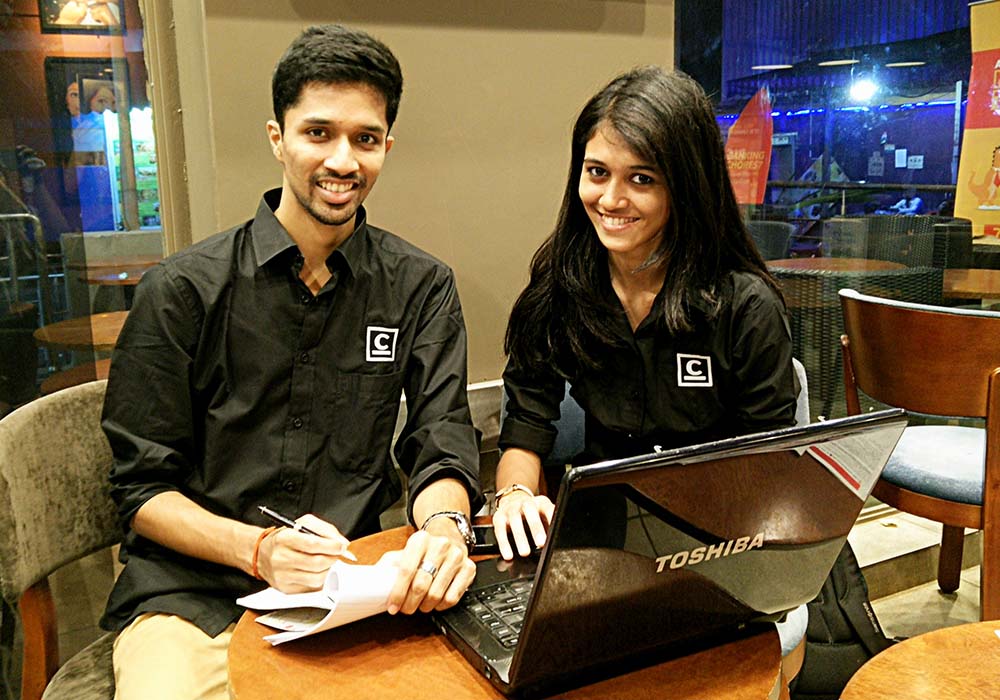 Freelancing in India was earlier considered as a domain for those who can’t or don’t want to get into full time jobs. Technology has made it possible to work from even remote areas, thereby making even the full time working professionals, taking up consulting or part-time assignments. However, working with and hiring freelancers is one pain, which despite of so many avenues available has not come up permanent solutions.

There have been traditional players like Naukri, Monster India, etc., along with the newbies such as 4jobz, myjobindia, and more. Also, there are international portals like Freelancer, Elance, but finding the right candidate for the right job at the right price is still a daunting task to do. Mumbai-based Croogster, launched in March this year by Dev Hisaria and Manisha Parab, aims to bridge this gap by making hiring freelancers as simple as buying things from ecommerce platform.

It is a service marketplace that makes hiring freelancers and getting quality work delivered on time possible at a minimum fixed price of INR 299. For example, if an entrepreneur is struggling with recruiting, he will have an option to outsource things at INR 299 to professionals, if someone needs to get wedding card designed, s/he will be able to find a designer at 299 and more.

“We want to create a platform that comes to rescue whenever people need something done. We want to create a talented community of freelancers who would like to offer their skills to the ones who require them, making things easy for everyone,” said Dev.

The portal currently provides more than 50 types of services including graphic designing, content writing, digital marketing, video editing, programming and more. It even has an option of ‘Gifting’, where users can get customised services from expert freelancers.

Croogster’s biggest USP is its fixed pricing policy. The freelancers are given reviews and ratings on the basis of their work and are promoted to higher levels. At higher levels, the freelancers get more orders, more benefits and also have an option to increase their prices to a higher limit.

Unlike other platforms that work on a bidding model, Croogster works as an ecommerce website helping people shop for the services they require. As said by Manisha Parab, co-founder and COO, “Freelancers have an image of taking up serious business projects. We are trying to create a community that is not only confined to business projects, but is also open to offer amazing range of services which are frequently sought by people but rarely found.”

At present, Croogsters is working with a team of four. The target audience for the startup are entrepreneurs, SMEs, startups, college students and freelancers. The platform charges 10% processing fee to both buyers and sellers after completion of the task. The payment made by a buyer remains secured in an escrow account created by the company, and is released only when the buyer is satisfied with the service.

In a very short span of time, Croogster has successfully completed more than 300 orders and unique user count has reached an almost thousand. The founders are currently earning a monthly revenue of approximately INR 20-30K and claims that they will be able to break-even by August this year.

In the near future, the founders’ plan is to make the platform available in the B2C market and help common people get things done using the expertise of freelancers.

The Rising Tribe Of Freelancers

As per Manisha, getting both buyers and sellers to use the marketplace simultaneously was a difficult task at the beginning, but that gets sorted by time.

India has close to 1.8 crore freelancers and there has been a steady rise in numbers in the last 5 years, making India home to the maximum number of freelancers in the world. It has even left behind countries like US and UK.

The market size for online freelancing is projected to grow to $4.4 born in 2016, while the market for micro work is estimated to reach $0.4 Bn. Thus the total online outsourcing industry is projected to be worth $4.8 Bn in 2016. Medium-term models estimate that, in 2020, it will generate gross services revenue in the range of $15 Bn to $25 Bn.

“Seeing the recent demand for freelancers, all that is required is how easy you make things for your users and how prudently you solve the problem,” said Dev.

The Other Freelance Finders

As mentioned by John Larase, Marketing Specialist at Time Doctor, in the past few years, UpWork (formerly Elance and Odesk), Freelancer, and 99Designs have shown significant revenue growth. In 2014, Upwork spent more than $1 Bn on its platform to find freelancers and knowledge-based workers. And by 2018, the company estimates that online outsourcing will be a $5 Bn industry.

There are now hyperlocal marketplaces such as Urbanclap, Urbanpro, Taskbob, etc. where self-workers are picking up assignments. Also, there are several Facebook groups offering freelancing assignments such as Media Jobs Daily, Put Me In Touch, etc.

It’s pretty clear that the place is already crowded with a lot of players. Also, it has been seen that freelancers are more inclined towards the foreign platforms as they can charge much more working internationally than locally. So, to build something new and to stand out is quite difficult for any new player in India.

Since, Croogster has been launched just 2 months back, it would be early to predict anything. As far as its business model is concerned, the price paid to freelancers is very less compared to global estimates of $19/hour, charged by Indian freelancers worldwide. At the same time, low competition and low prices, can help new freelancers to build their portfolio and reach higher levels to earn more.

Despite Zostel’s Claims Of Victory, Stalemate Continues In Tribunal Case Against...