Can Focus On Security Take Pidge Through The Latest Hyperlocal Delivery Storm?

Can Focus On Security Take Pidge Through The Latest Hyperlocal Delivery Storm?

With Zomato, Dunzo, Swiggy, Flipkart and others leading the wave, the competition in the hyperlocal delivery space is getting fierce for smaller players such as Pidge

Gurugram-based Pidge is banking on sanitised and tamper-proof parcel, food and D2C deliveries as a USP with live tracking

While Pidge’s unit economics have been negative since inception in 2019, it expects to have a positive contribution margin by the year’s end

After the rise of hyperlocal deliveries and couriers through 2015 and 2016 came the massive fall. It took out the likes of PepperTap, TinyOwl and others and now nearly five years later, the market seems to be gravitating back to hyperlocal.

India’s hyperlocal market is expected to have reached a value of INR 2,306 Cr by the end of 2020. This time around, unlike the hyperlocal bubble of 2016, startups in the hyperlocal space are not only focussing on lowering delivery cost and increasing margins, but also not expanding recklessly. The sector saw massive upheaval in 2016 with over 400 startups recorded and 100+ startups shutting shops.

With supply chain, retail market and out-of-home consumption crippled by the pandemic, hyperlocal is back with a boom, riding on convenience, reliability, safety and the need for sanitised deliveries. Today’s hyperlocal wave is being led by Zomato, Dunzo, Swiggy, Flipkart and others — with the latter three in the door-to-door hyperlocal courier service — so Gurugram-based early-stage last-mile delivery startup Pidge has some heavily-funded players to battle.

And the battle is only intensifying. In June, the ecommerce giant Flipkart launched hyperlocal deliveries in under 90 minutes from local stores and its own small fulfilment centres. In April, Swiggy expanded its Genie courier service to over 125 cities in India, thereby enabling users to order items from local stores and send parcels to each other. 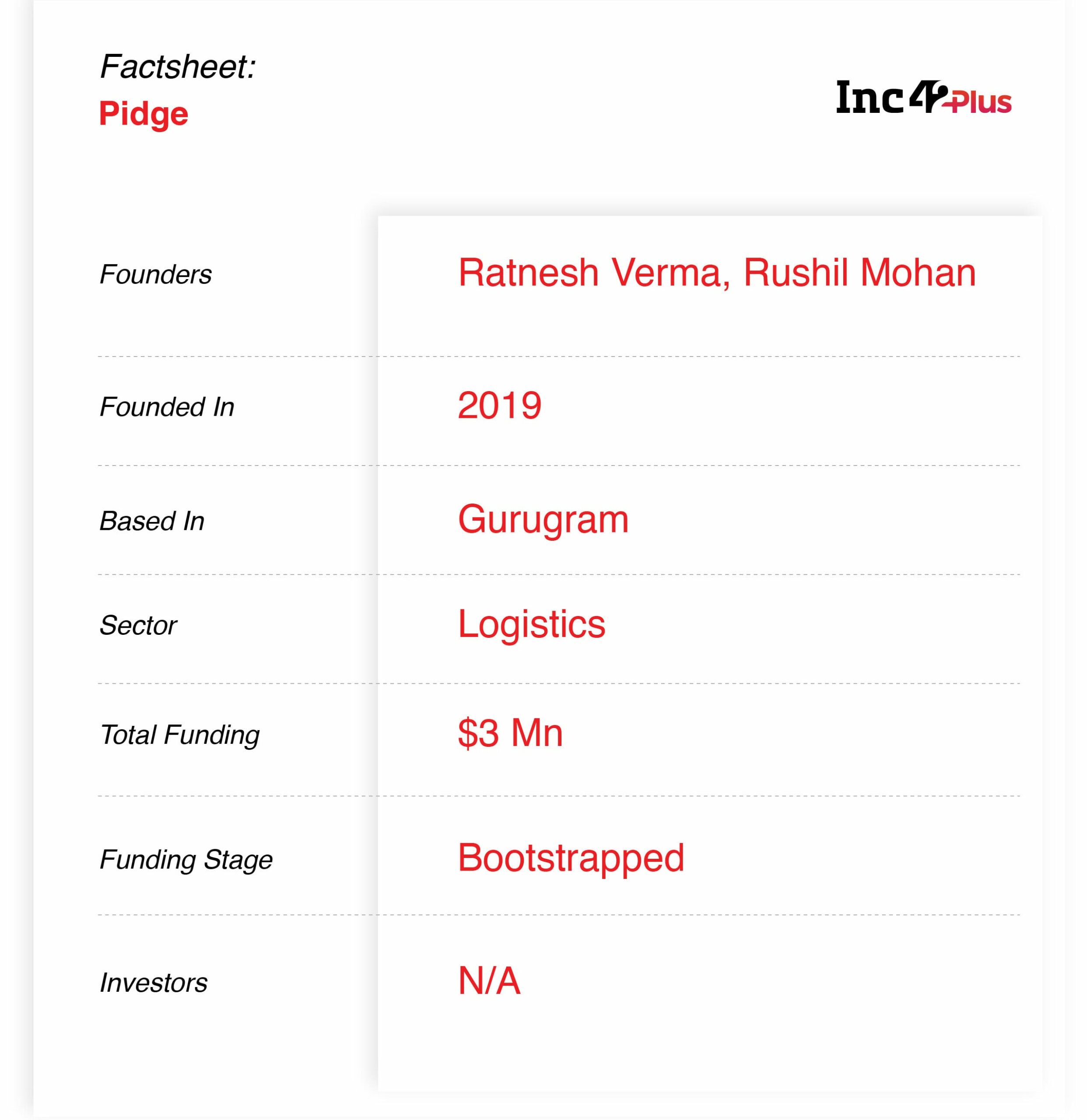 Founded by father and son duo Ratnesh Verma and Rushil Mohan in 2019, Pidge’s USP is that it offers sanitised and tamper-proof packaging for last-mile door-to-door couriers and delivery, live tracking and packaging service. The courier service can be used by individuals and businesses, whereas it also supports food delivery in Delhi NCR.

The bootstrapped startup is currently operational in Delhi NCR covering Delhi, Noida, Gurugram, Faridabad and Ghaziabad. Besides the on-demand deliveries from individuals, it also works with over 80 businesses such as fresh produce supplier SuperPlum, bakery The Baking Table, book store Bahri Books, online pharmacy PharmaRack, online pet store PoochMate, and dine-in restaurants such as the Taj group of hotels, The Big Chill Cafe, Masala Monk among others.

Speaking to Inc42, founder Verma said that Pidge is uniquely placed among the competition, since it not only has a focus on safety and security, but also the fact that all its delivery executives are on the payroll unlike other players. The founder believes this instills a sense of responsibility in the delivery staff about the package that outsourced delivery executives from third-party service providers don’t have.

However, the real USP from the customer standpoint both for businesses and individuals is the tamper-proof packaging, which consists of a plastic bag or carton. It is designed in such a way that customers can place as many items as the carton can fit, with no max limit. The package needs to be packed and sealed by the customers themselves, who also have to add the package details. And once this is done, Pidge fulfils the delivery in less than 60-mins and authenticates it with a one-time password (OTP) process. The service also includes live tracking of the package in transit. 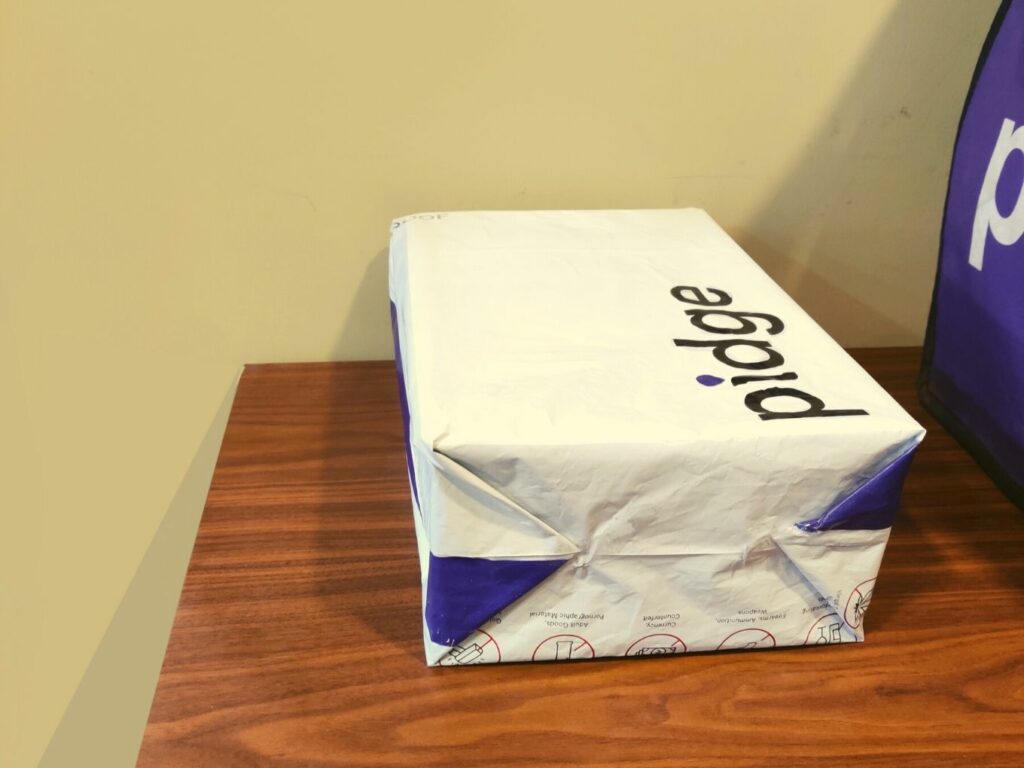 With safety concerns rising during the pandemic and both Swiggy and Zomato slow to respond to them there’s definitely a niche for secure and tamper-proof packaging. While most issues are resolved with some refunds, this does not solve the problem at the basic level, which Pidge is looking to do.

In terms of the revenue model, Pidge earns its revenue per order, which is dependent on factors such as distance, locations covered, peak hours and volume of the items and number of packages among others. The company said that its automated pricing tool calculates the cost for customers on an on-demand basis, and purely depends on orders. For instance, for the first two deliveries, Pidge charges its customers INR 99.

Verma claims that Pidge’s unit economics has remained negative since inception last year but by the end of 2020, it expects to have positive contribution margin. “In the first quarter, we had a negative unit contribution of about 32%, and over every quarter this has been improving, and by end of this year we expect to go positive.”

There is good reason to be optimistic about unit economics, but that’s provided that Pidge does not expand too quickly.

Dunzo, for example, which has been in the hyperlocal delivery business for more than six years now, witnessed a growth up to 33% in its weekly orders during the lockdown phase and saw a spike in its average ticket size, savings per delivery and number of orders fulfilled per hour. But founder Kabeer Biswas had warned that “There is no way to turn a city profitable in less than 18-24 months. If there is, it gets too expensive. So there’s always the right amount of time that you deploy a particular amount of capital in for you to be able to get the best bang for your buck,” he added.

Pidge told Inc42 that by next year it looks to expand to Jaipur, Ahmedabad and other cities in western India, followed by southern Indian cities such as Bengaluru, Chennai, Hyderabad and others.

With initial investment of $3 Mn from the founder, the company said that it has been doubling its revenue and has been growing at 110% MoM in the last few months. It currently has 400+ in-house, trained delivery executives, and claims to be adding 10% to 15% delivery executives every week. Given that it says demand has gone up by an average of 25x on a daily basis — the first 50K orders took 40 weeks and the next 50K came in the past six weeks — it wants to have around 1400-1500 delivery executives by the end of the year.

“This demand is coming from two key segments, individuals (C2C) and businesses (B2C & D2C). We are seeing rapid growth from business to consumer and D2C brands, and collectively we are witnessing a double digit growth,” he added. In post-Covid times, a majority of 70% of the demand is coming from businesses and at the current pace, the B2B2C delivery segment could contribute up to 85% of the revenue by the end of the year.

With festival weeks around the corner, Pidge is gearing up to include multiple orders at an affordable cost for individuals and businesses from the gifting perspective. It makes sense given that travel will be low this year given the pandemic.

“For instance, one can send about 100 Diwali gifts to their friends and family with just a click of a button,” said Verma, adding that this product is still in the development stage and would be expected to be launched before the festive season.