Can A D2C Brand Be Retail-First? How Forbidden Foods Is Playing The New-Age FMCG Game

Can A D2C Brand Be Retail-First? How Forbidden Foods Is Playing The New-Age FMCG Game Gurugram-based Forbidden Foods is said to be pioneering ‘Popped Chips’ category in the country that are neither fried or baked, but popped

In the next three to four years, Forbidden Foods looks to be expand in 50K retail stores across 10-15 cities, including Mumbai, Pune, Bengaluru among others

It’s India’s D2C moment, and more and more brands are realising the power of going directly to the consumer. For some brands though, the D2C route is not possible to sustain in the initial run, due to challenges ranging from regulations to the retail stranglehold on certain categories. But yet, these new-age technology-led companies are D2C in nature thanks to the ethos and brand identity espoused.

For Forbidden Foods, the challenge is not about going D2C or not, because, in a category such as snackfoods, there’s very little incentive for the consumer to purchase directly from the company. Instead, Forbidden Foods has chosen to go the retail and aggregatory path for its BRB Popped Chips.

With their collective experience in the FMCG sector, the founders have taken the health and format as their USPs. Created using specialised equipment in Germany, the popped chips are neither baked nor fried and are said to have 60% lower fat content than regular chips or wafers.

As for the brand identity, Forbidden Foods has gone the quirky route calling its products ‘smartphone-friendly’ because of the no-grease factor, which ties into the health aspect as well.

“At the end of the day, no packaged food can be healthy. However, we firmly believe that this is an indulgence category, and when people are consuming this, they are going down a guilty pleasure,” said Krishan, highlighting its products’ significantly healthy attribute.

Of course, Forbidden Foods and BRB chips are far from the only brand to have taken the health snack route. The likes of Guiltfree’s Too Yumm (RPSG Group), New Tree, Snack Attack and To Be Honest among others have emerged in recent times. 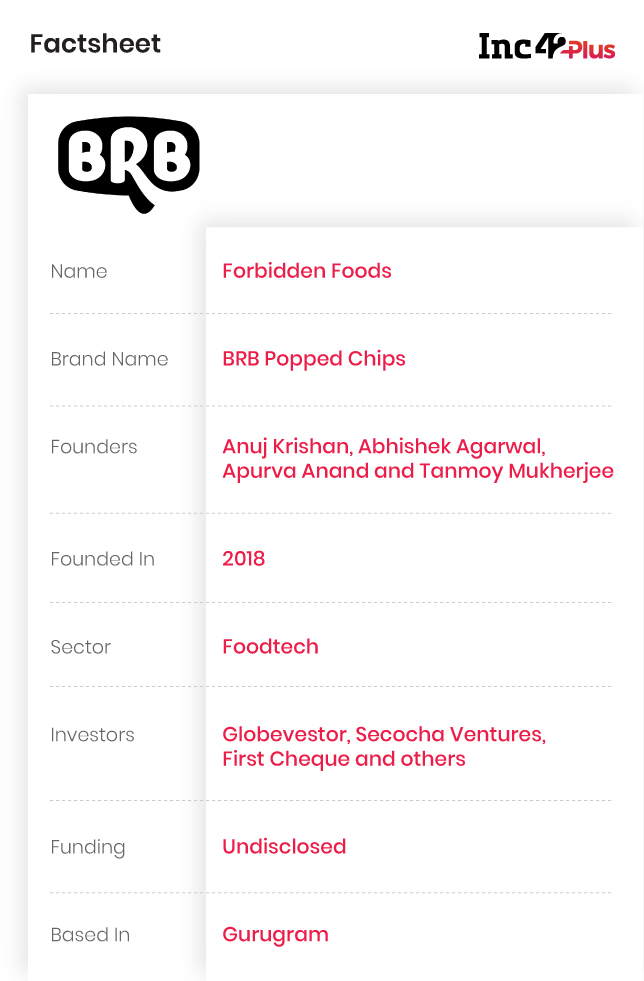 How Forbidden Foods Grew Into A Retail Brand

Launched in January 2020, BRB Popped Chips is the first product from the Forbidden Foods stable and began with availability in Delhi NCR. Currently, the distribution is done through 500-plus retail outlets.

Backed by crowdfunding investment platform Globevestor and early-stage venture capital firms like Secocha Ventures and First Cheque, alongside angel investors, the company has counted on the investors for market access. “The network of investors and entrepreneurs not only supported us from a capital, mentoring and advice, but also helped us in building the right connections in the market to further expand our business,” Krishan added.

With Covid-19 in the picture soon after BRB was launched, Forbidden Foods quickly decided to partner with aggregators such as Amazon, Big Basket, Milkbaset and Supr Daily. Kishan claimed 40% of the sales during this period came from retail channels, while the same was seen through ecommerce and grocery delivery platforms, while the remaining 20% came through vending machines and other channels.

“Unfortunately, the pandemic and lockdown hit all of us, but now, we are slowly starting to see a recovery in retail in the last couple of months,” Krishan told us.

Pricing wise, the BRB chips are priced between INR 30 to INR 40, which is steep compared to the ocean of options available in the market at a cheaper price point which also claim to have the right healthy qualities. This is where Forbidden Foods’ social media engagement is trying to make a difference and trying to acquire users online in a manner similar to D2C brands, even though the purchase may not happen online.

The Tech Behind New-Age Retail Distribution

Despite its D2C ethos, Forbidden Foods is a retail-first brand at the moment. However, beyond its extensive frontline force of sales executives and merchandisers, it is using mapping demand, fulfillment and more using salesforce automation (SFA) tools and distribution management system (DMS).

“The entire sales and fulfillment process is done using these apps and there is no manual intervention. This also allows us to have a fairly decentralised org structure with a real time dashboard for top management to monitor,” Krishan said about the tech backend that keeps a retail-focussed brand going in the D2C era.

Technology will of course play a crucial role in ensuring wide outlet coverage as the company scales to more cities, especially for high order fill rates and to eliminate out-of-stock situations, which is a big turn off for new adopters. Krishan feels that this tech-driven approach gives the company an execution moat which not many competitors are willing to do, or able to do. He added that there is a lot of heavy lifting required to build such a capacity even before the technology takes over.

Another area where Forbidden Foods does a D2C-like job is in branding and marketing , which includes memes and contests on social media. “This builds a loyal following and engagement, and most importantly, reinforces the brand through a physical product that consumers can use in their daily life,” added the cofounder.

It also runs several below-the-line activities through partnered networks. For instance, the company recently tied up with Milkbasket and Chaayos to do large scale sampling, where it gave away chips with each order. This helps build a buzz and gets people tasting the products, which is the first and biggest adoption barrier. “We are so confident with our products that we want to lead with it. Once people try it out, there will be repeat customers.”

To measure performance and RoI of its online campaigns, the company analyses the direct sales, uplift in offtakes (margins) in retail stores, reach and engagement, and brand recall that is built measured through surveys.

The ‘Make In India’ Move

“This technology is so new and unique that nobody in India has the equipment or knowledge to make these products,” stated Krishan.

As indicated earlier, the company makes its chips in Germany and raw material is sourced from around the world. For instance, potatoes are sourced from France, sweet potatoes from the US and seasoning and spices from India. The company will soon be bringing this production facility to India. “We are already in the process of setting up this unit, and this facility of ‘Popped Chips’ manufacturing will be first in the country,” he added.

Naturally, this would result in lower production cost and the company plans to pass on the cost savings to the consumers by lowering the prices in the future. This, in a way, will reinforce the affordable premium positioning of the snackfood as well. Krishan claims the manufacturing facility will enable Forbidden Foods to innovate on new product development more rapidly and get them to market faster.

From a product perspective, currently, Krishan claims that the company has developed over 50 flavours, both in-house and in partnership with research labs, out of which only four are launched in the market. “In the next three to four years, we aim to be present in 50K retail stores across 10-15 cities, including Mumbai, Pune, Bengaluru among others.”

“With this upcoming facility, we are fully committed to the ‘Make in India’ initiative, where we will be bringing cutting edge food processing technology to the country.”