The Rajasthan-based startup claims to be delivering 10K orders on a monthly basis in frozen camel milk, camel milk powder and other value-added products

There are several factors that a company needs to consider when operating in a niche segment, and a new-age, bootstrapped startup working with camel milk is as niche as it gets even in India’s massive dairy industry. Having the first-mover advantage in this space, Aadvik Foods was sitting pretty in this small market, but when large dairy companies start eyeing the territory, what will be the X-factor for the Rajasthan-based startup?

Cofounder Shrey Kumar believes it will be trust and tech. The former is built on the back of a network of over 200 camel farmers, with a healthy customer base of 2.5 lakh consumers, as well as some businesses. While disruption in the supply chain and realignment of the entire cold chain operations, meant the network of farmers has now dropped to 150, it is now delivering close to 10K orders per month, compared to pre-Covid times where it was doing 6K orders per month.

As for tech, Kumar said that the integration begins right from the procurement stage. A large majority of camel farmers in India are sceptical to supply camel milk for commercial use due to cultural differences. Moreover, preserving and processing of milk are also tedious. Typically, the shelf life of camel milk is three days from the time of milking, provided it is maintained under the right conditions. The frozen milk, however, is estimated to have a shelf life for 1 year, which makes it better suited for processing and other use-cases.

Founded in 2015 by Shrey Kumar and Hitesh Rathi, Aadvik Foods procures and sells camel milk, besides processing it for frozen camel milk, milk powder, value-added products such as chocolates and skincare products. It’s also working with goat milk farmers to enter into another niche milk market. Currently, it has over 60 SKUs and claims to have customers from the US, Singapore and the Middle East besides India, with international sales accounting for 5% of its overall sales.

In terms of revenue distribution of its products, Kumar said that the revenue from sale of frozen milk ranges from anywhere between 25-30%, followed by 30-35% from powdered milk, and remaining 70% comes from its chocolates and skincare products. In the non-milk category the skincare products and chocolates have been doing really well, he added.

“The future is beyond just the supply of milk, there are other value added products like exotic sweets made from camel milk, ghee, butter and yoghurt etc, and there is a lot of scope for such products in India as well as outside the country,” Kumar said, adding that more products are in the pipeline to be launched next year.

The Tech Behind Camel Milk Supply

“Typically, camel milk requires a special technique to pasteurise, unlike cow milk which goes through the ultra-high-temperature (UHT) method. However, for camel milk, we use high-temperature short time (HTST) pasteurizer technique to retain the composition of milk as it is consumed by consumers for its medicinal properties and values,” the cofounder added.

Aadvik has invested heavily in building cold chain capabilities which ensure the optimum temperature at all times across the supply chain. This tech integration is also part of building the trust.

The UHT and HTST techniques used for pasteurizing animal milk kill harmful endemic bacteria and viruses, and this is a critical part in providing safe milk.

As for the technology used in the cold chain, that’s still under development with IoT and sensors being developed by the company. Presently, Aadvik tracks the camel milk across the supply chain using personnel, which explains why the Covid-19 pandemic had a big impact on the company. With tech at its core, Kumar said the use of IoT across various touch points will increase efficiency and distribution to new audiences.

The third component in the tech stack is the freeze-drying techniques for manufacturing camel milk powder, which give the company a competitive edge over larger dairy companies. Aadvik claimed to be the first company in the country to do this, unlike other brands which use spray drying techniques for converting liquid milk into powder, which reduces the true nature/characteristics of milk.

Under its newly launched private label entity called Hye Foods, Aadvik also uses spray drying technique so it has both sides of the market covered. The difference in pricing between spray-dried powder and freeze-dried powder allows it to sell more through its website and ecommerce marketplaces and diversify its product portfolio. 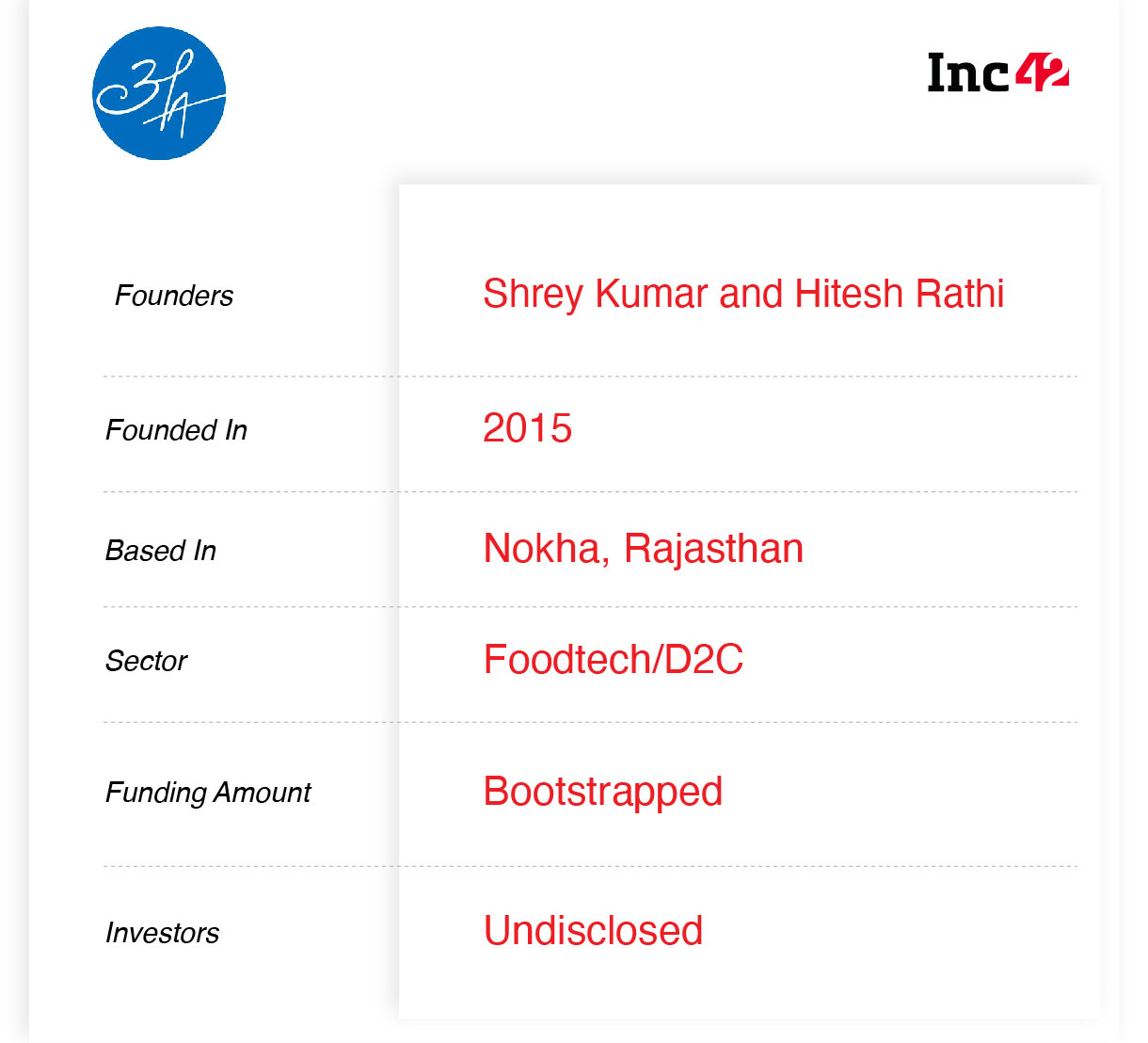 Going D2C And The Competition For Aadvik

Following an omnichannel approach, Aadvik Foods today has been leveraging both offline and online channels to sell its products, including Amazon, Bigbasket and Milkbasket, and retail outlets in places like Delhi NCR, Punjab and Haryana among others. It is also planning to start with a subscription model in the coming months, which is currently done manually with the existing customers. “At present, 55% of the sales comes directly from its D2C native website.”

In terms of revenue, Aadvik Foods told Inc42 that it achieved a revenue of INR 65 Lakh in FY17, followed by 7x to 8x growth in FY18. However, in FY19, the company said that it witnessed a stagnant growth of 30% revenue, and it hopes to improve this to 70-80% revenue growth in FY21. Aadvik’s financials for FY2019 and FY2020 have not been publicly released.

On the flipside, Aadvik might compete with brands like Bigbasket, Milkbasket and Milkmantra in the near future which have tech and distribution capabilities to expand into camel milk business.

To this, Aadvik cofounder said that it is not going to be easy as it is not something that you pay the camel farmers and procure the raw materials and start the production. It doesn’t work that way in reality. “Farmers will trust only those who have helped them in the past, and we have built that personal relationship with them. Not just farmers, even customers, in terms of delivering quality products that add value to their health and lifestyle who specifically come to us to buy camel milk products,” said Kumar.

According to IMARC, the global camel milk products stood at $5.98 Bn in 2019 and is expected to witness moderate growth in the next five years, growing at a CAGR of 6.84% due to increase in the number of dairies producing camel milk and massive demand from the Asia Pacific and the Middle East region.

In India, however, the consumption of camel milk is still in the nascent stage. With only a handful of companies in the camel milk business, including Aadvik Foods, Camel Charisma, Nutra Vita, As Fresh and Amul, the market opportunity is huge, and so are the challenges. As per Livestock Census, India’s camel population stood at 2.5 lakh in 2019, from 5.2 lakh in 2007. And there are about 25K to 35K camel farmers/breeders in the country. Unfortunately, camels are also becoming obsolete, making them less and less useful, and camel-breeders are also unable to afford their upkeep.

At present, Aadvik Foods claimed to procure camel milk directly from local farmers in Rajasthan and Gujarat on a weekly and monthly basis, and process and store the milk at its state-of-the-art facility located in Delhi. Even though all of its products are manufactured and processed locally, the prices of its final products seem to be much higher compared to other milk-based products and alternatives.

Given the perceived and known health benefits of camel milk, there’s a lot of interest from health-conscious Indians who are lactose intolerant or may want to add alternative foods to their lifestyle. Aadvik’s cofounder told us a large majority of the consumers come from Tier 1 cities, and that’s not about demand or distribution alone. Kumar said that Aadvik procures camel milk at a price higher than milk corporations such as Amul. That allows it to build on the trust with the farmers but ultimately, the price is high. “Obviously, we are paying more than the per liter price that has been given by the giants, because the camel milk has to be premium.”

The company also told Inc42 that it helps them in setting up bank accounts and ensures that the money gets credited to their account on a monthly/weekly basis, unlike other irregular procurement from a cooperative or milk producer association, which leads to income leakage.

Beyond this in terms of manufacturing and processing, Kumar said that maximum spending goes into preserving the milk and cold chain, accounting 70% of the final price.

“Initially, 1 litre of camel milk was about INR 600. But, now we are selling it at INR 400. Similarly, for camel milk powder it was INR 7500/kg, and we have reduced it to INR 3000/kg,” said Kumar, stating that the demand and supply of the milk often influences the price of the final product. On the other hand, dairy giant Amul, which ventured into camel milk products last year. Its 500 ml and 200 ml PET bottles are retailed at INR 50 and INR 25 respectively, clearly indicating the already strong infrastructure and network it has set up in place with its already existing cow milk business and other value added products.

Though camel milk has health benefits, the taste and smell of it is something unique that most of the consumers across the country would either like it or hate it. Also, those who are trying for the first time often have questions in their mind related to the smell and taste. Aadvik Foods said that they have been getting a lot of queries related to this from customers over the years and claimed that some the first-timers are now regular customers.

“In fact, 90% of queries that we get on a regular basis have been related to this, where consumers ask for various properties and health benefits related to camel milk, along with the solution for getting used to taste and smell,” he added. “We always tell that it is an acquired taste, Once the customer starts drinking, the taste for camel milk gets better.”

Currently, running its business in bootstrapped mode, the company said that in the coming months it is looking for strategic investors who can help scale its business multifold. “We strongly believe in the concept of generating profits for all of our stakeholders and our biggest stakeholders are at the bottom of the pyramid, followed by our team. For investors to see profit in this space, it takes a minimum of three years, and when we find the right investor who aligns with our values, we will raise funds,” concluded Kumar, on an optimistic note.