Traffic on Indian roads is increasing every single day with thousands of new vehicles being sold. And more often than not, people here are known to have a complete disregard for basic traffic rules making things all the more dangerous. People who ride 2 wheelers are known to deal with a lot of driver fatigue, not only due to the pollution but also due to frequent shifting of gears and the hand-leg-eye coordination required for the same takes a toll on them.

Kochi based Bisko Labs understood this problem and came up with an intelligent solution for the same. The Intelligent Transmission Technology or IGT, as they call it, allows riders to convert their geared motorcycles to automatic ones at the flick of a switch, without altering the performance of the vehicle. This can even work for people who are relatively new to riding two wheelers and not very comfortable handling gears.

There is an external actuator which is placed under the shift pedal and a control unit inside the bike. When the driver applies the clutch, the ECU instantly decides and shifts the gear. The unique feature is the intelligent algorithm which decides how to change the gear according to the driving style. 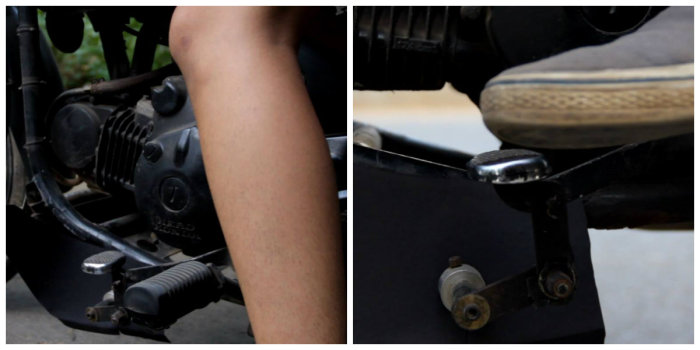 The device can be turned on or off. So if you want to lend your bike to your little cousin who is just an early rider, you can let him ride with the IGT turned on. Or whenever you feel like switching to manual you can easily switch in between. The best part is that this technology doesn’t affect your bike’s current millage in any way.

See what people have to say when they got a chance to use the device in the bikes.

The startup has been conducting test runs for the past one and a half years, covering over 20,000 km on road.

“The prototype is available for test drive and has been test-driven by many people. We are getting good feedback and enquiries for modification of their bikes. So now we are going forward with modification of bikes,” said Vivek Mohan, CEO and co-founder of Bisko who started working on the product in 2012 with his co-founder Alfred Johnson.

The startup is also in talks with Mahindra to discuss about bringing a new model of bike with this technology to the market and also seeking help for further testing & development.

“We are in touch with prominent automobile firms for the manufacturing and marketing of this technology. After entering into a tie-up with automobile manufacturing firms, the IGT will be marketed as a company fitted mechanism. IGT technology will also be replicated on cars with normal manual gear system in the near future. After getting the approval of Automotive Research Association of India (ARAI) the IGT mechanism can also be installed in the existing models of motorcycles.,” tells Vivek.

Bisko Labs is funded by Guerrilla Ventures, founded by Dr Ritesh Malik, and was also selected as one of the top five emerging startups by Startup Village.

So will you give it a test run?