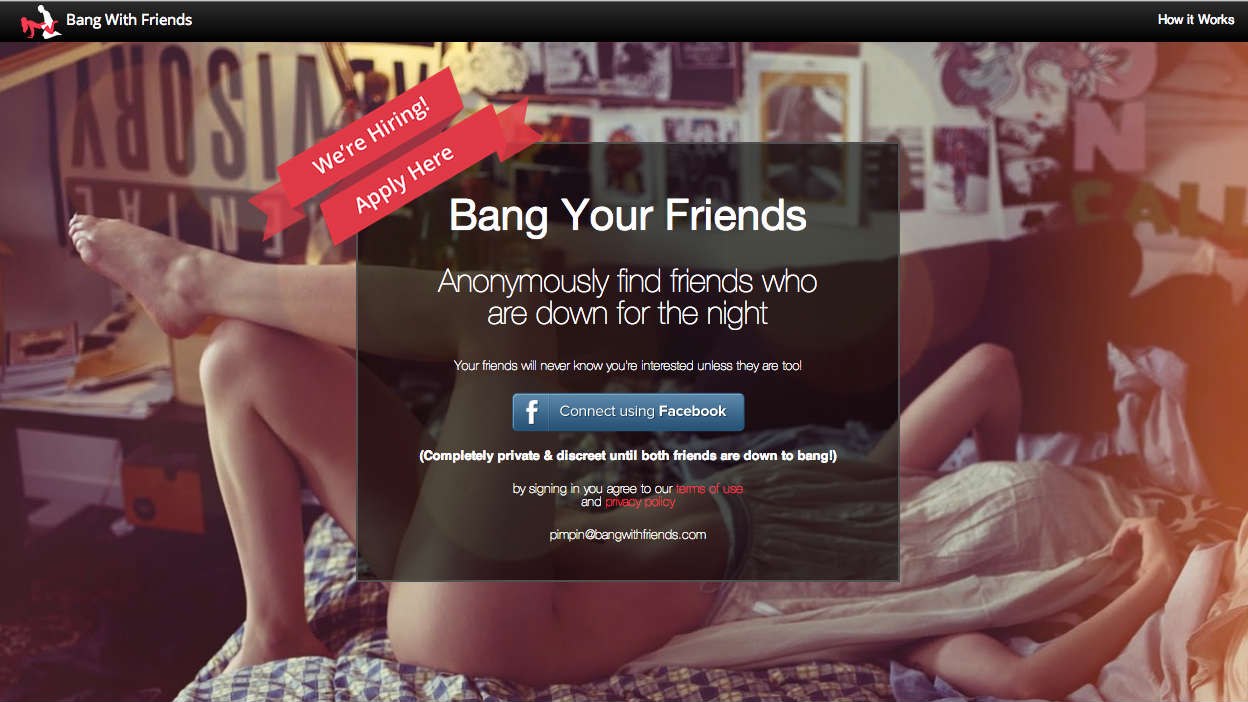 “Bang With Friends” is a new Facebook app that says it helps you “anonymously find friends who are down for the night.” But as you might expect of a Facebook app, it’s not all that anonymous.

Bang With Friends’ controversial debut attracted plenty of media attention, as well as user interest. The app’s “mostly 20-something” user base has topped 30,000, according to the California-based creators — three men who keep their identities hidden. What’s more, they claim the app is registering five new users, or “bangers,” every minute.

Bang With Friends’ goal is simple, and its approach has a decidedly frat-boy-esque quality that may appeal to a young user base (the creators’ contact email is “[email protected],” after all). To join, users sign in with Facebook, and are taken to a page that features names and photos of their friends. After settling on an object (or objects) of lust, users must click a “Down to Bang” button that then changes to “Awaiting Bang.”

When you log into the app, you’ll see a screen filled with your Facebook friends of the opposite sex. The app appears to be designed for exclusively heterosexual pairings. It only — apparently mistakenly — shows same-sex Facebook friends who don’t have their sex listed on their profiles. This is true regardless of how your sexual orientation is listed, or whether it’s listed at all.

Clicking “Down to Bang” on any one of these people’s faces shouldn’t notify them that you’ve done so unless they click “Down to Bang” below YOUR face, too.

Until this point, the app is working as well as an app like this can. But the “Bang With Friends” promise of discretion has a loophole, one that could be hard to explain even IF you’re supposedly on it just to be funny: Facebook lets people accessing the app see which of their friends are already using it, BEFORE having the option to authorize it themselves.

It’s not really “anonymous” when your Facebook friends can see that you’re out there trawling for sex, is it? It’s embarrassing enough knowing that they can just see you, but imagine one of your Facebook friends clicking on “Bang With Friends,” seeing YOU there, and deciding there probably isn’t anyone in there worth downloading the app for after all. (I mean also it’s likely the app was designed, at least in part, as a joke. Right?

Unless you’re someone who believes (almost certainly wrongly, by the way) that your Facebook friends are all dying to hook up with you, and would do so if only given the bright blue button to admit it, the app doesn’t really offer you anything you couldn’t already accomplish on Facebook without it. How many people would really freely admit to wanting to hook up with a friend who wouldn’t already have some indicator of interest? Shouldn’t you already kind of know your chances with your Facebook friends? Part of the grossness of “Bang With Friends” is the way it conceives of friendship as something you only do to get to, well, banging.

But if you do decide to take the “Bang With Friends” plunge (sorry), just know this: It won’t be as secretive as the app’s creators might have you believe.

“Support for same-sex selections is already under development here at BWF along with an iPhone application for banging on the go,” the app’s creators told Mashable in an email. While the creators provided no specific launch date, they said these new features will launch “soon.”

The app says it “will only show your friends that you’re interested if they are too,” and notifies both parties via email about their mutual interest.

What do you think of the app? Would you use it? Tell us in the comments, below.