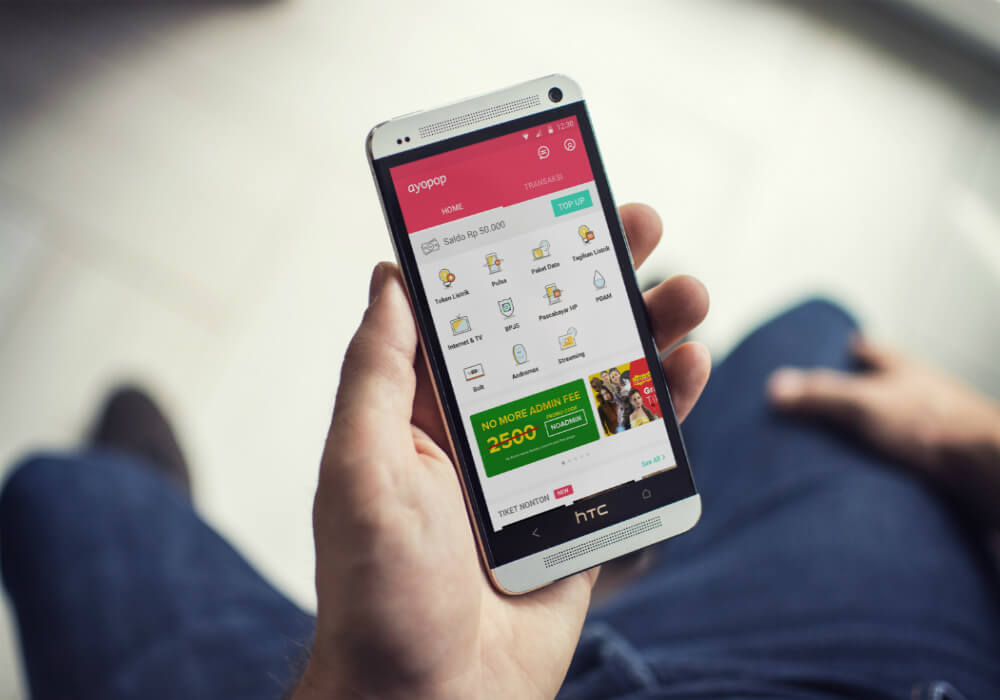 In 2015, Former Product Head at Times Internet Chiragh Kirpalani moved back to Indonesia after being in India for 12 years. Like any other new resident, he got a new telephone connection, health insurance, electricity and water connection, among other things. But when it was time to pay monthly bills, he was overwhelmed – each and every bill had to be paid separately and everything had a different process that needed to be followed.

Coming from a country like India, where the fintech revolution is at a peak and companies like Paytm, Freecharge and Mobikwik have made day-to-day finance-related tasks much easier for a common citizen, Chiragh realised the need for a one-stop solution for utility bill payments, much along the lines of Freecharge or Paytm. So,  he decided to launch something which could come in handy for the Indonesian community – and this is how  Ayopop’s journey started.

Chiragh met Jakob Rost, who came equipped with the experience of running one of the biggest ecommerce companies of the archipelago, Lazada Indonesia, acquired by Chinese ecommerce giant Alibaba. Jakob got together with Chiragh and launched Ayopop in 2016 as an app that specialises in bill payments. In other words, it enables users to pay for things like their phone bills, electricity, and Internet services through its app. 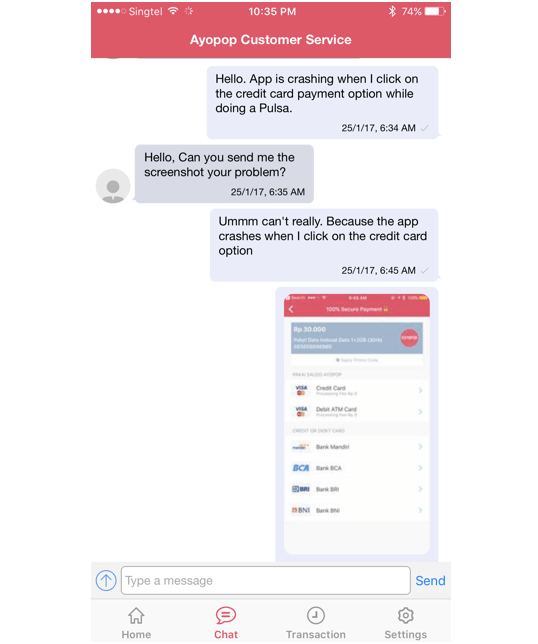 The startup recently secured $1 Mn in a Seed round led by Indonesia-based GREE Ventures. Other angel investors from India including Miten Sampat and Aakrit Vaish also participated in the round. Besides, the duo have also roped in Sandeep Tandon, founder of FreeCharge, as an advisor.

Begins Chiragh, “While big ecommerce companies were good with logistics, warehouses, parcels, return processes and COD, no equivalent platform for digital products and bill payments existed. There was a market where customers were looking for almost real-time fulfilment, were willing to wait in the CS queue for days if something went wrong and were generally not experienced with online transactions in the first place.”

Just like Paytm and other Indian apps in this space, Ayopop allows users to facilitate online payments for mobile postpaid, electricity bill, Internet, DTH, on-demand videos, water bills among others. Users can also add money into their account via credit card, bank transfer, or other payment options, including e-cash and top ups, and can then spend that amount on various services the app offers.

Additionally, the app also sends monthly reminders to its users for outstanding bills and dues, apart from cashback deals on certain products. 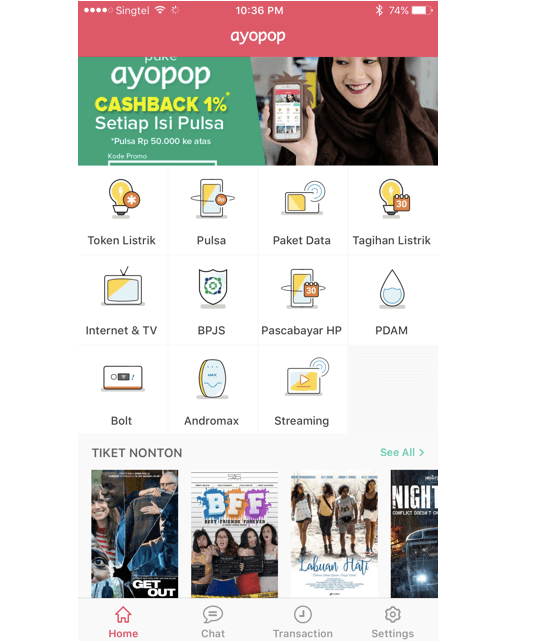 The company currently charges a commission from the service provider’s end on each user transaction. Although, the company does not want to restrict its business models to just percentages and is exploring other monetisation avenues as well. Chiragh claims the app has been “doing so well that the numbers are getting outdated pretty quickly,” but did not disclose the number of transactions processed.

It’s a service that targets everyone who has a smartphone and has to pay bills. Adds Chiragh, “We have a broad range of customers ranging from 18 years to 60+ years. Bill payment affects almost everyone in the country and we have seen users who have been looking for this kind of offering for a long time, joining our platform. Most of our users are 30+ and even 40+, they are the ones paying the bills for their families and taking care of the overall finance responsibility in the household.”

Partnerships and Products: The Road Ahead

The app is currently available for iPhone and Android users. The startup will use the freshly raised funds to expand tech capabilities. It further plans to launch more offerings in the near future and will increasingly focus on partnerships with ecommerce, traditional market players and financial service companies. The startup eventually plans to grow beyond bill payments and will also focus on cross-selling in the near future. It also plans to launch recurring payments (auto-deduct feature) in partnership with various banks and financial institutions.

While there is no clear information regarding the recurring payment laws in Indonesia, there are many Southeast Asian startups offering this service, currently operational in the archipelago. Startups like MOLPay, PayPal Indonesia, Faspay among others allow users to auto-deduct money from their accounts via a subscription-based model for periodic payments.

Earlier this month, the financial regulatory body, Bank of Indonesia (BI) also issued a circular letter on licensing procedures and requirements related to payment system transactions in the country. While it touched on many aspects, e-wallets in the country were mandated to be topped up by means of cash deposit, transfer or auto debit from savings account, or electronic money. This auto debit feature would then facilitate the task of recurring payments, and startups like Ayopop would be able to preferably retain their customers, when it came to effortlessly paying one’s monthly bills.

Commenting on the investment, Nikhil Kapur, GREE Ventures said, “We believe that payments will play an essential role in the Indonesian fintech landscape over the years to come and it remains still largely an unsolved problem. The Ayopop team has the right vision and hands on experience in the digital ecosystem in the region with a hard-to-find balance of experienced commercial and tech side.”

The app currently has more than 100K downloads and, as per Chiragh, has a very active and repetitive user base. Ayopop has its offices in Jakarta and Pune and is employing a team of 15.

The digital payments sector has seen a lot of impressive and rapid developments in Indonesia. The country started with a mobile-first strategy, allowing it to be in a unique position to experiment and develop new business models on mobile, primarily driven by commerce. Banking on a population of 250 Mn, Indonesia’s smartphone usage stands at 66 Mn, whereas the Internet usage stands at 88.1 Mn, according to TechinAsia. 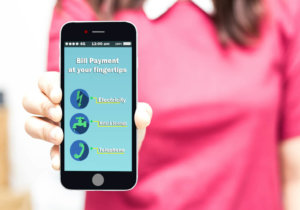 One of the most funded Indonesian startups, Tokopedia, traditionally a C2C marketplace, has also entered the digital payments sphere and offers electricity and insurance bill payments, in addition to mobile phone credits and data plans. Indonesia’s newfound unicorn Go-Jek, which started out as a ride-hailing app has now expanded its network extensively into payments. The company launched GoPay, its digital payments platform in April 2016 and it currently accounts for more than half of the transactions on Go-Jek’s platform. On the other hand, rival Grab just signed a deal for acquiring Indonesian payments startup Kudo, in March 2017.

Talking about the bigger players and impending competition, Chiragh says, “Indonesian payments sphere is a big and emerging field and different startups can focus on various focus areas with different opportunities.” They are focussing on the end-to-end aspect of utility payments.

While the ecommerce industry has boomed rapidly, the most preferred payment method in Indonesia is still bank transfers. Indonesia’s emerging economy and government’s attempts to foster digitisation posit a fertile ground to this young company to grow its offerings and create a network of integrated partnerships and cross-selling.

At the same time, it would require heavy adoption by its online base, and a cultural shift towards reliance on digital payments as the new go-to service. Much like India, where startups like Paytm and Freecharge have seen a gradual rise in their usage, Ayopop also has a huge opportunity to bank upon, provided it can smoothen the end-to-end payments process.

The startup globally competes with players like PayPal, and faces competition from homegrown ventures like Indosat’s Dompetku, Rekening Ponsel, Doku among others.