Livo claims the process of collecting the blood sample to processing and reporting takes about eight minutes, compared to 24 hours under conventional methods

Post-Covid, Livo said that it will be working on extending the tech for early diagnosis of other diseases such as cervical cancer, breast cancer

One barrier to point-of-care or lab testing in India seems unsurmountable — we are talking about the time taken. Getting a blood test report done  — which is one of the first things that doctors suggest when one is suffering from any kind of sickness or disease —  can be cumbersome. If the Covid-19 pandemic has brought this into sharp focus, the fact is that this is the reality for most conditions today, which involve a complete blood picture (CBP) analysis, including renal diseases, malaria, dengue and chikungunya among others.

Once the report is ready, doctors will then be able to suggest necessary treatment and medical care required.

While traditionally, the entire CBP report process takes about a day, an RT-PCR test for diseases like Covid-19 takes about 48 hours to complete. While the treatments and healthcare infrastructure seem to be digitising at a rapid pace, the device used to test the blood or body fluid remains archaic.

Sharing the bitter reality, medical devices startup Livo cofounder Dr Junaid Shaik told Inc42 that there are about 2 Lakh diagnostic centres/hematology labs and 20-25K pathologists in India and a majority of them are still using conventional blood analysis devices that are time consuming. Plus, the usage of reagents in the process limits the devices to test more samples as reagents expires by end of the month whether the machine uses them or not, he added, which was highlighted severely during the ongoing Covid-19 crisis.

Hyderabad-based Livo claims to have developed a state-of-the-art blood analyser device that not only gives the data of blood count and eliminates the usage of reagents, but also gives out the morphology report of blood cell (RBC, WBC & Platelets). The 3D parameters and morphology report of the cell is of great value, as it helps doctors identify abnormalities in the cell structure, and also it has the potential to distinguish cancer cells.

Shaik added that Livo’s blood analysis device enables the completion of the entire process of collecting the sample to reporting in just about eight minutes, which is less than half the time it takes to even prepare a slide with the sample in the conventional process.

Typically, a blood count done by flow cytometry gives out ‘Count data’ of red blood cells (RBC), white blood cells (WBC), hemoglobin, platelets count. And based on the count, doctors will be able to diagnose illness and suggest medical treatments. Semi-automating the entire process, Livo cuts down on the time taken. “In the process, we realised that our Livo AutoSmearer and Livo HemaStainer itself is quite unique, nothing like in the Indian market” emphasised Shaik

Livo AutoSmearer is a clinical device that is used to collect the blood sample, and can be smeared on the microscope slide with a push of a button. A Haematology Stain, on the other hand, stains the sample, where the blood smear slide is usually placed in a coplin jar with leishman or wright stain for 8 – 10 minutes and then washed before its ready for microscopy. with Livo AutoStainer (having a modified Wright-Giemsa stain) Blood smear is stained, washed and ready for microscopy analysis in 90 seconds

It has to be noted that the same Livo A700 device can also be used as a pap smear analyser, a test conducted to screen for cervical cancer which is the second most common cancer found in Indian women, Shaik added.

When it comes to medical analysis devices, accuracy is the biggest challenge. In terms of accuracy of the reports, the company said that it leverages artificial intelligence and machine learning tools to scan thousands of microscopic images to provide accurate results. Livo claimed to have run clinical trials on 300 patients/cases, and said that its reports are 96%+ accurate, and all its devices are CE and ISO 13485:2016 certified.

Citing the new medical device directives, the company said that it has also applied for In Vitro Diagnostic Regulation (IVDR), which will be effective from May 26, 2022 onwards. In addition to this, it is in the process of getting no objection certificate (NOC) from Central Drugs Standard Control Organisation (CDSCO) after they have classified Livo A700 as unregulated device under India’s new medical device rules (MDR) 2017.

In terms of accessibility, Livo claimed that its devices are easy to operate and can be accessible across remote locations, particularly in Tier 3, Tier 4 and Tier 5 cities/towns as it has built the technology capabilities within the device.

Furthermore, ensuring its devices are also affordable, Livo’s blood smearer and AutoStainer is priced at INR 1.15 Lakh, and has also come up with a rental model where diagnostic centres, labs and clinics can rent its devices for INR 2-2.5K per month. “If you want to purchase blood smearer and strainer in the Indian market, the cheapest ones cost about 2.5 Lakh, and we have reduced the cost by more than 50%,” informed Shaik.

Livo said that it plans to charge its customers only the manufacturing cost of the device, as it believes in keeping the margins low, given the volume of the business, and looks to earn MoM recurring revenue from subscription. Also, the company said that all its devices are locally manufactured (in partnership with local CNC vendors) and are assembled in-house.

Founded by Dr Junaid Shaik, Faisal Sheikh, Prof. Prasanth Kumar in 2018, Livo has been in the process of product development for the past few years. Shaik told Inc42 that it has received 25 preorders and Livo recently closed a distribution deal of 800 devices from southern Indian states, including Telangana, Tamil Nadu, Karnataka, Kerala and Andhra Pradesh. Backed by healthtech-focussed angel investors and industrialists such as Ravi Reddy, Dr Praveen Kumar and others, the company has raised a total of $366K in funding, with a most recent round at 100 Cr valuation. 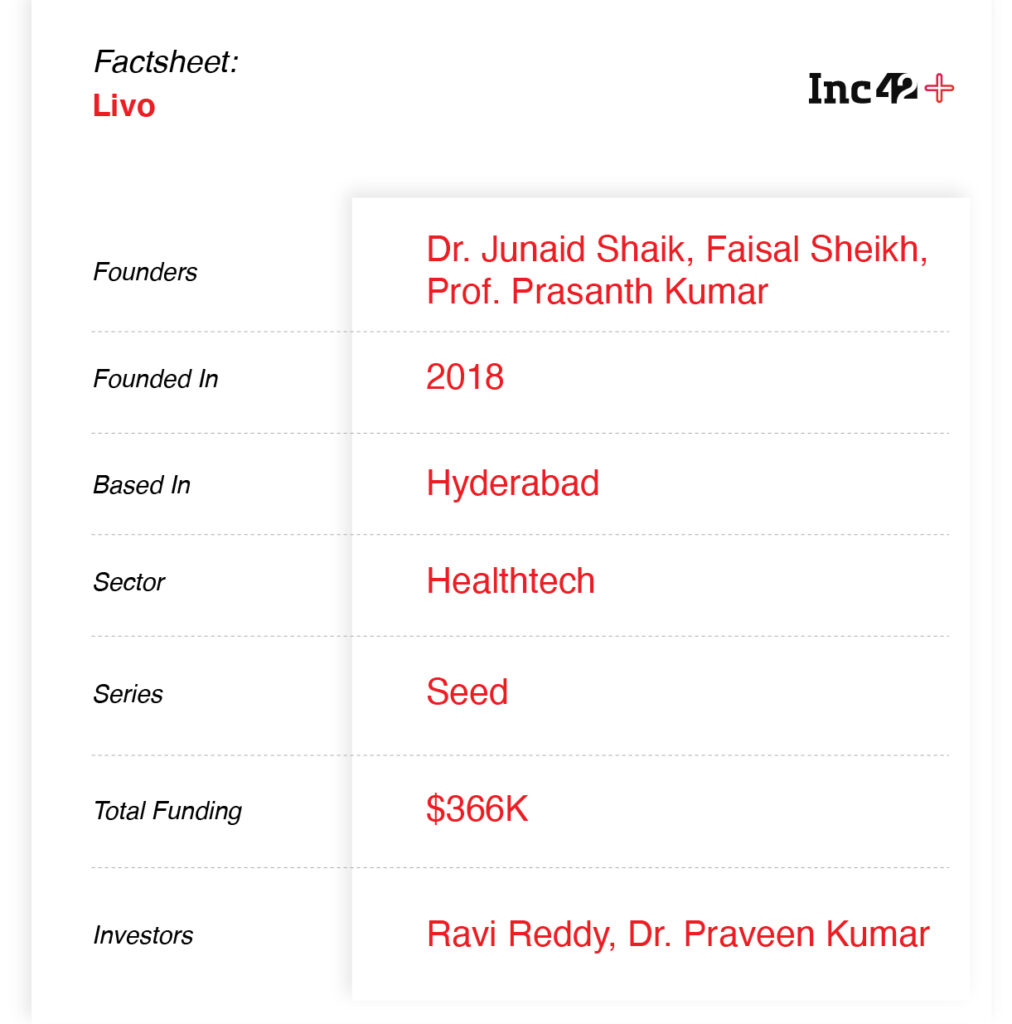 At present, Livo competes with the likes of Sight Diagnostics, Cellavision, Roche, 1Drop Diagnostics, Arivale among others. According to MarketWatch, the point-of-care diagnostics market is projected to reach $46.7 Bn by 2024 from $28.5 Bn in 2019, growing at a compound annual growth rate (CAGR) of 10.4%.

Livo told Inc42 that it currently positions itself differently in terms of its zero reagent, low cost and on-site digital morphology report, compared to other competitors in the space, where their devices are expensive, time-consuming and have no way of giving a morphology report without an onsite pathologist.

Testing In The Times Of Covid-19

Incidentally, Livo had plans to launch its products (blood smearer, stainer and scanner) into the market in April. But, due to the disruption in the supply chain led by Covid-19, the company had to postpone its launch to the second week of August, and its operations came to a stand still.

However, during the pandemic times, the company utilised its resources effectively to work on its upcoming products, a pathology scanner called Livo A-1000. The device does more than just scan the sample and produce digital reports, said Shaik, fascinatingly.

He said that this new device has the capabilities to share and send digital slides over to remote pathologists via cloud. “We have developed a platform, which follows a neat workflow and ensures the entire process is smooth. Also, we have used machine learning tools, which stitches thousands of images and detects abnormal cells and raises a red flag immediately,” Shaik said, adding that this will greatly enhance the accuracy of the report provide easy access to pathologists, general physicians and gynecologists.

Livo’s new device is priced at INR 3.5 Lakh, which the founder claimed was one of the USPs. “Again, the cheapest scanner in the market would cost about INR 6-9 Lakh, excluding other features that comes with our device,” added Shaik.

Currently, the company is still in the pre-revenue stage, and in the coming days, Livo said that it will be partnering with two of India’s biggest hematology stain and microscope manufacturers to further boost its production capacity. Also, the company will be collaborating with IIT Hyderabad and IIIT Nuzvid for research and development work, added the founder.

“In the coming months, we will be coming up with multiple use cases, including semen analysis, histopath, breast cancer, liver cancer, oral cancer cell detection, etc. This is all the starting point for us. In fact, we are already working on cervical cancer, and in the coming days, we will start working on breast cancer.”