After Selling A Startup To Facebook, This Duo Is Bringing Voice Assistants To India’s Ecommerce

In terms of trends in vernacular usage, Slang Labs says consumption is still higher in English but interactions are going up in regional languages as well

As the market in metros and Tier 1 India reaches the saturation point for ecommerce companies, the next growth avenue will come from the massive base from smaller cities and Tier 3 and Tier 4 locations. Recently, Fireside Ventures’ Vinay Singh told Inc42 that to crack the so-called Bharat market, the key points are — engagement through video, vernacular content and voice interactions. And while video-based vernacular content and ecommerce platforms are more or less covered, regional language voice capabilities can be the next space for innovation.

Recently, Flipkart introduced a voice assistant to enable consumers to discover and buy products using voice in multiple languages, starting with Hindi and English. While this was developed internally by Flipkart, Slang Labs is looking to bring its voice-to-action SDK (software development kit) to other ecommerce marketplaces, D2C brands and online travel agents.

The brainchild of Satish Chandra Gupta, Giridhar Murthy and Kumar Rangarajan, Slang Labs has been around since 2017. Rangarajan and Murthy had previously founded Facebook-acquired Little Eye Labs, while Gupta has worked with Microsoft Research and Amazon. The startup is essentially providing multilingual in-app voice assistant tech to ecommerce players as well as brands that are running their native online stores.

Explaining the product and the core functionality, cofounder and CEO Rangarajan told Inc42 that the company has built a voice layer on top of any existing app, which is seen as an overlay whenever a customer tries to interact with it. The unique selling point for Slang Labs is its multilingual capabilities. The company lets customers interact with the platform using five languages—Indian English or Hinglish, Hindi, Tamil, Kannada and Malayalam.

Rangarajan told us that the app has five layers of technology on the client-side. Once a company integrates Slang Labs SDK on its platform, the use begins with automatic speech recognition.

Here using deep learning-based algorithms, the SDK is able to convert speech from recorded audio into text. It is further contextualised on the basis of the app and the sector or category it is serving. Next, using natural language processing (NLP), the product narrows down on the meaning of what the user said to understand the intent.

“If a user has given any data, the app will extract that as entities as data points, extraction and conversion are done then,” Rangarajan said.

Further, on the app-end, the software identifies the missing information and asks follow up questions. On the technology end, the SDK converts text back to speech to ask a verbal question to the user, in the language opted by the user and takes the next step accordingly.

This is a built-in dialogue manager, which helps the system understand what the next question should be. Giving an example of contextualising the questions, Rangarajan said, “For instance, for a travel platform, if a customer says “show flights from Delhi to Mumbai for 2 days later”, the text is contextualised to understand the date two-days from now and show the options accordingly. Further, if a user just mentions, “show flights to Delhi”, the system will prompt asking for the source and follow up accordingly.”

Currently, Slang Labs is enabled till the Add to Cart step in the ecommerce flow, but Rangarajan said, it is working to enable the further process of payments as well in a few months for a complete voice-based journey.

While initially, it took a few months for the SDK to be deployed as the developer had to work on low-level items and use cases as well, as the product has grown, Slang Labs has been able to integrate the SDK in a few days with any app. “We also take a few more weeks to polish the experience for a user and in a single sprint cycle, the product can be launched for customer use,” the cofounder added.

Currently built on the top of pre-trained models, on which more user data can be added in a matter of days, the SDK can also be scaled across multiple apps within a single company or platform thanks to the microservices-based architecture.

With a team of 16 people, predominantly in the engineering team, Slang Labs invested the first two years of its life on research and development and released the final SDK earlier this year. En route, it raised $1.25 Mn funding from Endiya Partners. 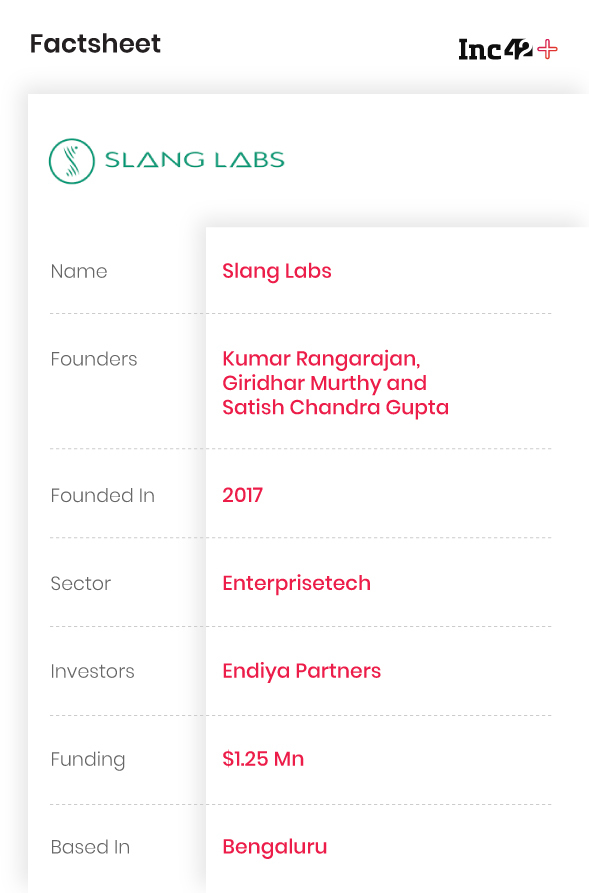 With eight clients including SpiceJet, BigBasket among others, the company now has 25K-30K monthly unique users. The company now aims to hit 1 Mn end users by the end of the year.

On the monetisation model, Rangarajan said, “The pricing is based on a monthly Slang Users basis, where the client pays per unique user of the voice medium. We charge anywhere between INR 2- INR 8 per user per unique user in a month.” Essentially, the company earns every time a customer uses Slang Labs to order via Voice.

Highlighting the trends among users, Rangarajan said that for ecommerce apps, the predominant language is English. “Other languages make 25% of the ecommerce business, and in that Hindi is the dominant one. In non-ecommerce apps like travel, the user demand is 50% in English and 50% in Hindi. We see more Hindi users on these travel applications,” he added.

Consumers often tend to mix voice and typing together, so the number of users able to finish transactions is high. Otherwise, with just typing or only voice, the cart drop rate increases.

“We see consumption continues to be English but customers want interactions to be in vernacular language.”

In the voice tech space, there are a lot of players— from global tech giant Google to ecommerce giant Amazon. The companies have voice technology as a service through their own SDKs and also consumer facing voice assistant apps. Amazon and Google are looking to endow Amazon Alex and the Google Assistant with regional language voice capabilities, and both already offer Hindi.

Among the startups that are offering voice assistant SDKs for speech-to-text conversion or speech recognition are full-stack products such as Alan, however, it does not support regional languages.

In India, in the conversational AI space, Bengaluru-based SaaS startup Vernacular.ai has also gained attention. Backed by AngelList, LetsVenture, Exfinity Ventures and others and with over $5.1Mn in funding, the company offers a voice-tech platform which is an intelligent, multilingual platform that can help automate up to 80% of call centre operations. The company is focused on voice solutions for calling operations and isn’t in the direct competition of Slang Labs.

Hence, the company with its multilingual in-app voice assistant product, Slang Labs is targeting a niche and unique market space. Rangarajan said that the company is now looking to explore international growth as well in the next year, as the problem of voice as a medium to interact with apps is a global issue. The company is also looking to actively raise funds going forward to scale up its growth.