Addverb plans to use the amount to expand in international markets, and also in setting up the world’s largest robot manufacturing facility

Addverb, within five years of its inception, has served clients including Flipkart, Amazon, Pepsico, Coca-Cola, Patanjali, HUL and more

“It took 4-5 months between us and Reliance to finalise the acquisition deal. We were in parallel talks with other potential investors as well. Reliance, however, moved super quickly and provided us the funding. Right now all I can tell you is that Reliance’s plan to automate is massive. I have no knowledge of another company who has such big automation plans,” — Sangeet Kumar, CEO, Addverb, said about the Reliance’s Addverb acquisition.

India is not known for its hardware and robot manufacturing prowess, but Delhi NCR-based Addverb is trying to change that.

Founded in 2016 by Sangeet Kumar, Prateek Jain, Bir Singh, Satish Kumar Shukla and Amit Kumar, Addverb was recently in news after Reliance acquired 54% stake in the company for $132 Mn.

Addverb’s proprietary warehouse robotics and automation products are being used by retail and ecommerce giants around the world. Over the years, it has helped giants including Flipkart, Amazon, Coca-Cola, Patanjali, HUL, Asian Paints, Pepsico, ITC and Marico in automating their warehouses.

The funding from Reliance will help Addverb fuel its global expansion. It already has operations in China, Europe, Africa, Australia and the United States. It also operates subsidiaries in Singapore, Australia, Netherlands and the US.

As a matter of fact, Reliance was also associated with Addverb as a client before indulging in investment talks. Besides the fund infusion, the Mukesh Ambani-owned corporate giant has also placed an order for automation robots worth over $1 Bn from the startup.

“Reliance needed a partner for its automation needs, and we needed a partner whose facilities we could use to experiment and scale our offerings. They have a big presence in the 5G sector as well. Reliance is a company whose scale cannot be matched by any other company in India. Reliance made the move and we also moved forward,” explained Sangeet.

For the uninitiated, the oil-to-tech conglomerate is betting big on the retail segment in both online and offline categories, for which it is leveraging a host of warehouses and fulfilment centres. For Reliance Retail, automating these warehouses is one of the top priorities of Reliance, the Addverb CEO told Inc42.

The Addverb journey began at Asian Paints, where the five cofounders were working on automating warehouses. Since robotics manufacturing was not India’s strength, Asian Paints had to import all the machinery, equipment, robots and everything else needed for this task.

That’s when the opportunity dawned on the quintet. “Why does India not have a manufacturer of robots? Why are there no automation equipment suppliers for factories and warehouses in India? These questions kept me awake for countless nights,” recalled Sangeet.

The five quit their jobs at Asian Paints and decided to launch Addverb from a two-room setup in Delhi’s Tagore Garden neighbourhood. They put in all their savings to launch the company.

Addverb went into a trial and error phase during the first year of operations. The focus was more on finding the right fit of suppliers and enablers for the startup. 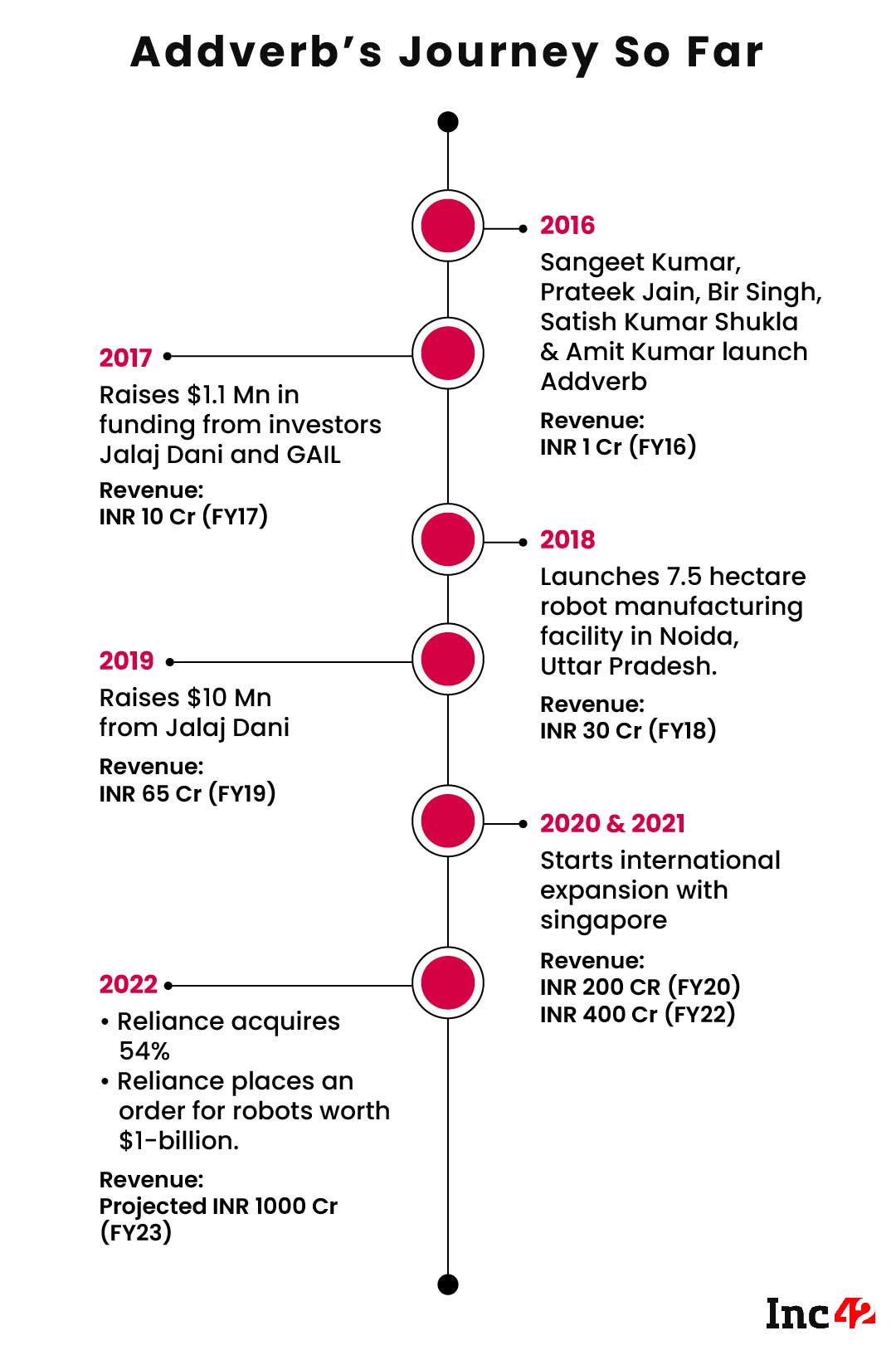 Despite no external funding, the startup was able to generate revenue of INR 1 Cr in its first year (FY 2016-17). But to scale up they would need funds. “We all had worked very closely with Jalaj Dani, co-promoter, Asian Paints. He had told us not to hesitate if we required anything around what we were trying to accomplish,” said Sangeet.

Dani agreed to invest $1 Mn in a pre-seed round, which was utilised for procurements, R&D, and fulfilling existing orders. The startup also raised INR 70 Lakh from GAIL India in its first year. It is interesting to note here Sangeet Kumar has worked at GAIL India and Asian Paints before Addverb, so he drew in the business leaders that he had already known to kickstart Addverb.

The founders took up charge of various parts of the operations. Sangeet Kumar became the CEO, Prateek Jain became the COO, Satish Kumar Shukla took on the role of head of marketing and HR, while Bir Singh and Amit Kumar were in charge of other aspects such as technology.

The biggest challenge in that first year included being able to set up components manufacturing in the country, and at the same time carrying out R&D or product development and cycle.

“It is easy to set up a software company in India as the talent, funds and mentorship are all available in abundance here. The biggest problem in setting up a hardware manufacturing company is the availability of talent,” pointed out Sangeet.

Addverb hired from the top engineering colleges of India and others who had connections with suppliers for raw material and machinery. Sangeet told us that all employees were given a free-hand, and allowed to try and fail. “We took help from a lot of our suppliers. It was their knowledge power that helped us become what we are today. Making 500 robots in a year is different from making 10000 robots in a year. Leveraging the experience of our suppliers has worked in our favour beautifully.”

It also entered into knowledge-sharing collaborations with engineering colleges in India and abroad. Addverb has worked and collaborated with IIT Delhi, Columbia University in the US and other IIITs.  The startup gave engineering students access to modern equipment and got access to their thesis and research knowledge around emerging topics.

India is not known as a hardware nation. It is generally seen as a market focused on software development and IT services. When it comes to robotics and automation, the country stands far behind market leaders. 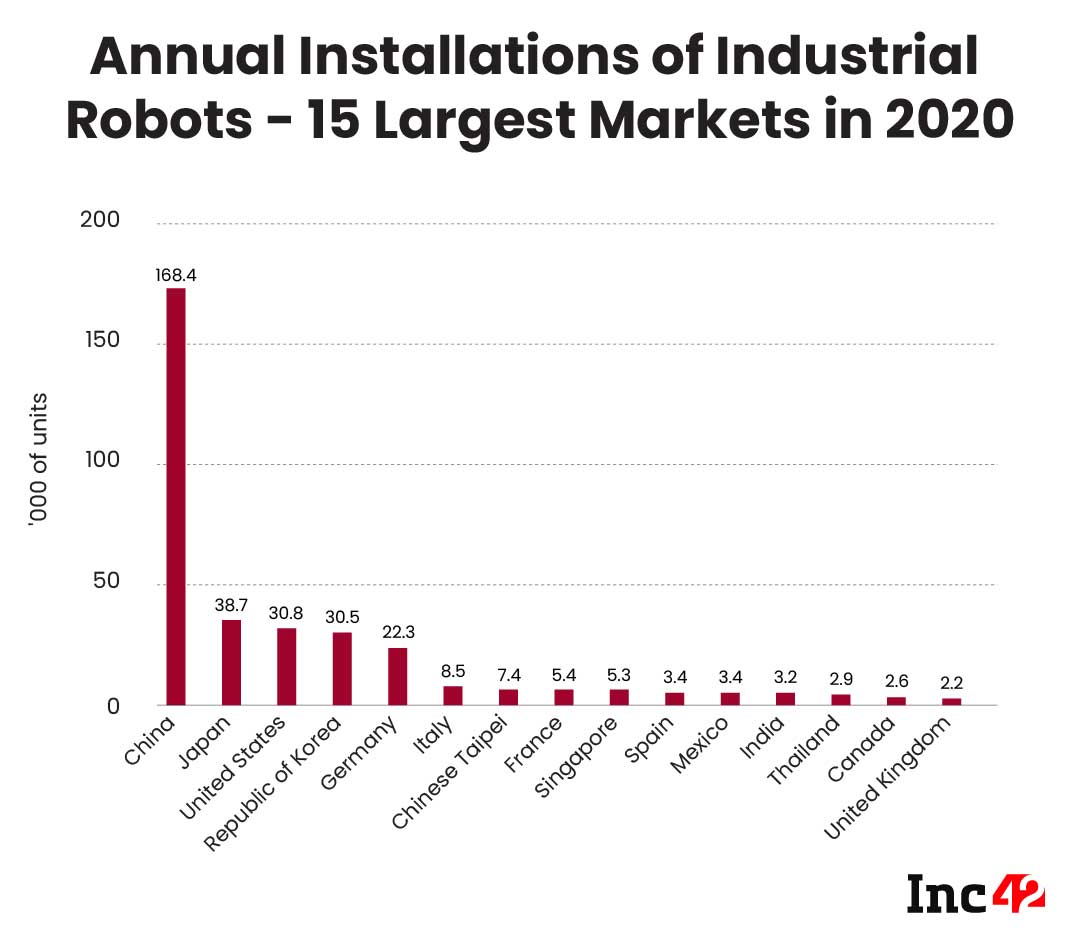 But Addverb is looking to change that while also posting healthy revenue and maintaining profits. Reliance’s investment in Addverb and the $1 Bn order have served to put the startup in the limelight, and barring the Covid-19 lockdown year, the company has been profitable since its inception.

What’s interesting is that the startup’s majority revenue, 80 per cent, has been coming from India. The company does have customers in Singapore, Australia, Philippines, Brazil, the US, Netherlands, the UK among others.

From a 7.5-hectare manufacturing facility set up in 2018 to manufacturing 10,000 robots annually, Addverb is aiming to grow its capacity by 5X now.

The company is also planning to hire 450 professionals by the end of the next fiscal year. It currently employs 550 individuals. “We would also be investing in setting up the world’s largest robot manufacturing facility here in Noida. The land has been applied for, equipment ordered, the construction will begin anytime soon,” the CEO told us.

With its two robot manufacturing factories, the startup will be able to manufacture 50,000 robots, claimed Sangeet Kumar. Besides this, Addverb is trying to increase its international revenue from 20% to 30%.

Addverb, after its acquisition by Reliance, it is also focusing on developing robots and collaborative robots or ‘cobots’ for the upcoming 5G era, and Reliance’s presence in the 5G testing, spectrum and equipment arenas might prove to be beneficial for the company. The biggest challenge that the startup is working on right now is setting up a component manufacturing ecosystem in India. It is collaborating further with industry and academia to enable the same.

“We are also open to work with other startups and organisations in the domain. We are eager to help and receive help in developing components in the country. Our aim is to have an ecosystem where we have suppliers of actuators, sensors and other components in India,” the cofounder said about the long-term vision for Addverb.