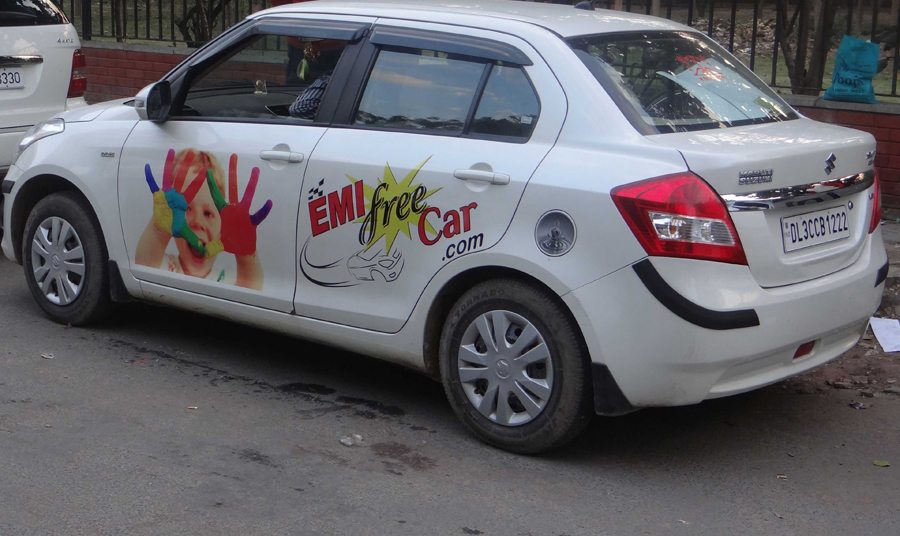 You must have seen some cycle rikshaws or auto rikshaws with hoardings. Even public transport buses and trucks painted with ads can be seen everywhere. But now, a start-up EMIfreecar is writing a new chapter to outdoor advertising where-in luxurious salons like AUDIs will display advertisements. This Delhi-based startup founded by Sachin Rastogi builds on the get-paid-to-drive concept in which the owners are paid money to put up advertisements on their cars.

EMIfreecar is a win-win situation for both car-buyers and advertisers. For car buyers, as their EMIs are taken care of. And, for advertisers as they get a new platform for their campaigns.

The customer pays 25% down payment of his new car and the venture pays 3 out of 5 years’ worth of EMI in exchange of 70% body space of the car for advertising. So, the customer can now dream for a bigger car as he would be paying a lesser amount. The owner will have to drive the car for a minimum of 1500kms every month, failing which he will have to pay the EMI of that month.

According to an Outdoor Advertising Magazine, mobile media billboards have a 97% recall rate. This has helped the company to lure marketers and advertisers. Now billboards may have to revise their prices to be competitive enough as they could attract advertisers at cheaper prices.

EMIfreecar is currently running its services in Delhi and has recently been launched in Mumbai as well. It is currently planning to reach a target of 200 cars in both the cities before approaching advertisers. With this, they want to make sure that they have enough space in the city to attract big businesses.

The founders plan to make it a 50 crore business by the end of the year 2015. As the auto sector experienced a decline first time in many years, this will also help increase the sales of vehicles as it would become easier to afford, despite the rising prices of fuel.

The founders are entertaining a lot of queries from prospective customers and advertisers these days but it would be too early to say how many of them actually get converted into successful business partners for them.

What customers should know

If a car does not cover 1500km in a month, the reimbursements shall not happen and the customer will have to shell out the EMI from his own pocket. However, if there is a genuine breakdown in the car, partial reimbursements may be made by the company. The startup does not entertain the cars that are more than a year old, as they do not consider them suitable for advertising purposes. Also, here the customer are not the sole owner of your car and hence will have no say in the choice of advertisements.

There have been many companies which pay car owners for ad space on their car. Adzinmotion is a US based startup which paid between $70 to $500 per month. Cashurdrive was an Indian car advertisement startup but it made payments to the car owner for advertisement.

EMIfreecar has incorporated this concept to another level by taking the burden of EMI off the customer. This might help them stand out of the crowd just like their painted cars. 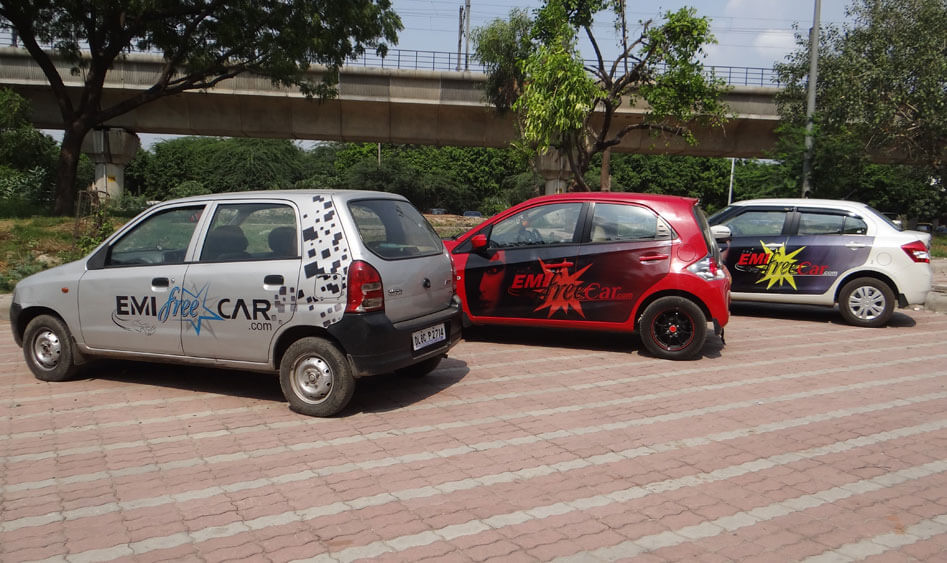 The Indian mindset might take some time to adapt to the concept of having advertising stickers on their cars. People who are conscious about their social status will express objections in putting ads. On the other hand, people with limited means will find this concept very useful as it is going to make their dream of having their own car come true without putting extra financial burden.

The idea is very novel and does attract attention, but between the fine lines, how successful it will be, would depend on a lot of factors. People would be concerned about ‘what people may think’ and also about vinyling their brand new cars with some random advertisements. Of course the 3 year EMI cost is very lucrative but the terms and conditions force you to drive 1500km a month, which would result in some extra long drives and fuel bills.

We can even get to see some big ironies coming true on road. Imagine a Nissan Sunny Car ad on a Tata Nano or a family planning advertisement on an Innova ferrying a family of 7. An employee of Airtel might be coming to office with a Vodafone ad on his car. He will surely get into a lot of trouble. And of course 6 months before the elections, Gandhi family would take over most of the cars to promote their family business (Read Bharat Nirmaan).

The startup is trying it’s best to put in least capital and is relying on self-marketing activities to popularize it. Cars painted with ads of Emifreecar are currently running in the city of Delhi and will soon be added in Mumbai as well. Let us hope they achieve their mission of ad(d) a car to customers’ and advertisers’ lives successfully.