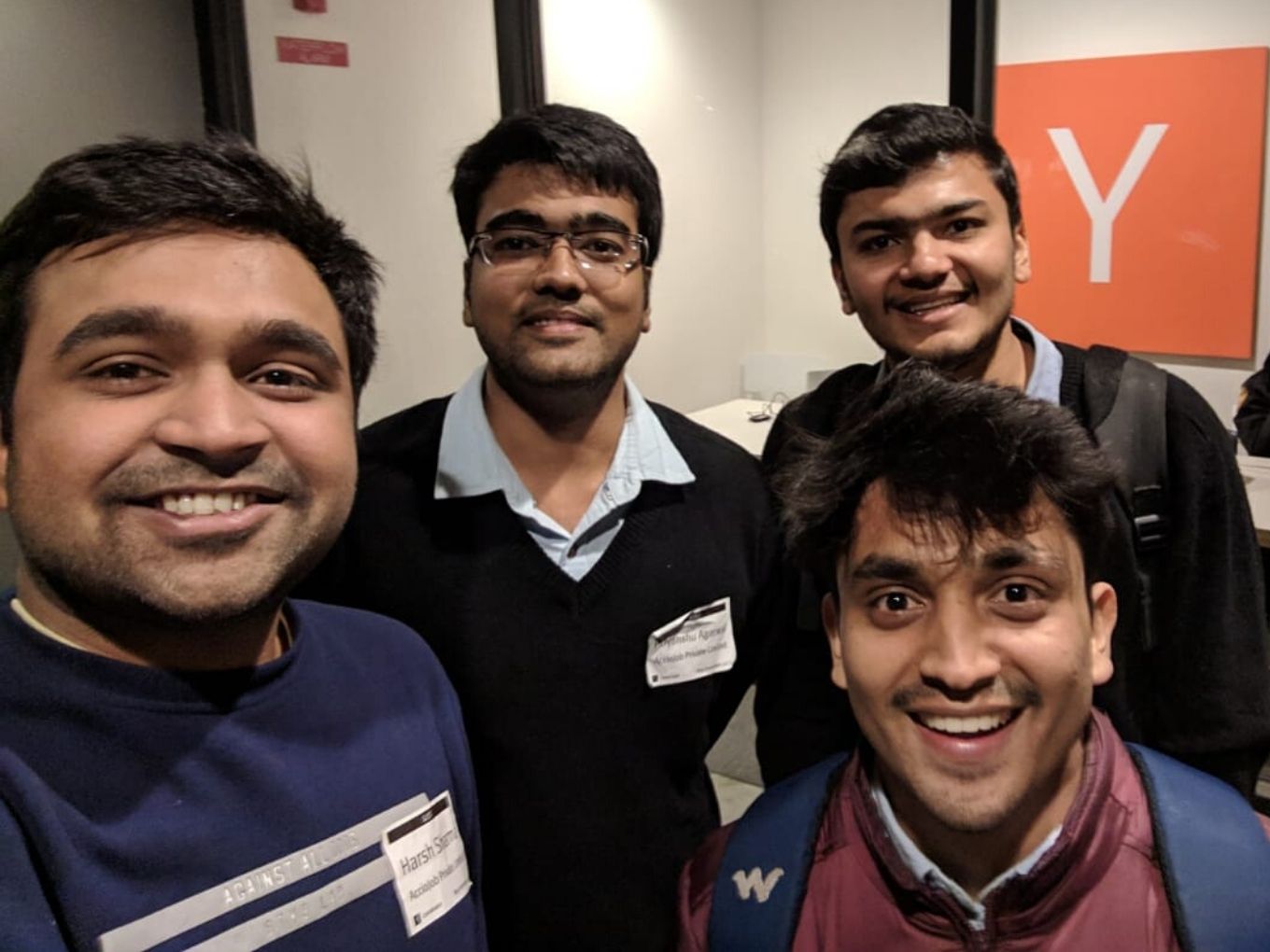 India’s fresh hiring activity this year fell by 61% as compared to May 2019, a Naukri report said

It’s perhaps the worst time to be looking for a new job in modern history. With a great recession already underway, the pandemic has stalled all economic momentum with no major country spared. Amid this, hiring is at an all-time low and layoffs are the norm.

New recruitment across experience levels has taken a massive blow with the entry-level experience bands (i.e zero to three years of experience) or freshers witnessing the sharpest decline of 66%, as per Naukri JobSpeak Index May 2020.

In fact, those graduating from colleges this year are likely to be in the job market for many months.  India’s hiring activity has plummeted by 61% (index score of 910) as compared to May 2019, which had an index score of 2,346, as per Naukri.

“The next three-four months will be a little difficult for freshers, but once the hiring is back on track, I believe that freshers will be the most sought after pool because of all the layoffs that are currently happening in the middle management and experienced levels across industries. We are positive that companies will start to prefer young and energetic crowds over middle management as soon as the hiring activity kickstarts,” said Yashwardhan Burad, cofounder at AccioJob.

Focussed on the fresher job market, Y Combinator-backed AccioJob offers placement and training solutions for students, colleges and companies in Tier 2 and Tier 3 Indian cities. Burad said that although there has been a decline in the hiring activity for freshers in the country, the startup has recently started to see a spike in demand for paid internships, especially in functions like software developers, design, social media, digital marketing, and content writing among others. As more and more companies look to go to remote working, such transient freelancer roles might be on the rise soon.

In these stressful times, freshers are definitely looking for more opportunities and perhaps internships might open up future career opportunities that the freshers had not explored, said Burad.

Today, a lot of recruitment tech startups are operating in the Indian market, competing with giants such as Naukri, LinkedIn, Shine and other hiring portals. The startups in this field include Internshala, HireMee, stuMagz, Twenty19, Letsintern, Superset among others. AccioJob claims it is uniquely placed in the hiring landscape as it not only helps students get placed, but also provides them with necessary skill development training in soft-skills and guidance that will help crack jobs and tests to kick start their career.

“We are at a time where anything is possible if one has the desire to learn. So, how we develop that curiosity, motivate them and boost their confidence becomes more important, instead of vouching for knowledge and intelligence — that will be the key,” said Burad.

While AccioJob shot to fame when it was picked by Y-Combinator W19 Batch Part 5, that was for a different idea. “We sort of pivoted from that idea a little bit as we ventured into providing training solutions to students,” said Burad, about being backed by YC, which has successfully launched startups such as Airbnb, Reddit, Dropbox and Stripe among others.

Besides Y-Combinator, the company has also been backed by Hershel Mehta, principal of Mehta Ventures and entrepreneur-turned-angel investor Sanjay Mehta, who is also the founder of 100X.VC. Till date, the company has raised a total funding of $165.66K.

AccioJob started its journey as a SaaS provider for colleges and universities to run their placement activities. Unfortunately, they noticed that the reception for the software was not great as only a few colleges were using their software effectively and many struggled, plus the low conversion. This is when the company decided to get into the training aspect to work closely with colleges and increase the conversion going forward. At the time, AccioJob was charging companies on the basis of students that were getting hired through their platform.

“The idea for us to get into training was to monetise from both sides — students as well as companies — alongside increasing the conversion,”

Burad said AccioJob went on-campus drives with its partnered colleges, but the conversions were not optimal, with a 4-5% conversion rate for an average of 200 students. It realised that companies actually wanted more than just technical skills and some of the graduates were unfamiliar with workplace culture.

On careful observation, AccioJob noticed that a majority of students who didn’t crack the interviews lacked soft-skills, and decided to offer two-week on-campus training programmes to students in a few of its partnered colleges. But Covid-19 has had an impact on this as well. While earlier, training used to happen in classrooms, AccioJob has now switched to online training, paid courses like interviews and placement master class. Each course also includes pre-recorded sessions, exercises, mock tests and live one-on-one sessions among others.

AccioJob cofounder said that they were fairly inexperienced lads when they entered the market with a product which they thought would solve the right purpose. “We managed to partner with a few colleges, but I guess we fell short in our market research,”  shared Burad. 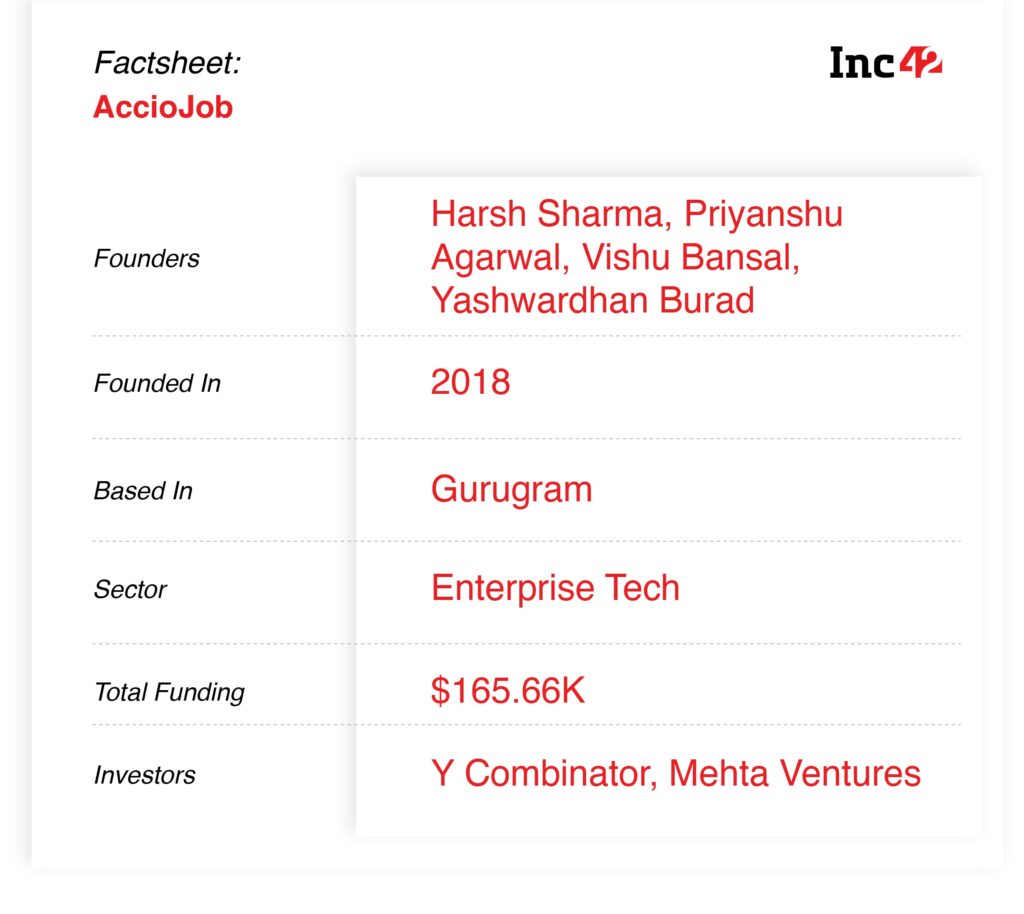 Education Does Not Guarantee Jobs

Currently, AccioJob claims to have collaborations with over 100+ colleges in Tier 2 and Tier 3 cities, including Lucknow, Meerut, and Bareilly among others. Through its on-campus training programme, the company has successfully placed over 400 students since its launch and has partnered with 20+ companies.

Disappointed with college curriculums, Burad said that the primary output for any student after completing the course is to get a job, and colleges have failed miserably as the majority of the students are still struggling to crack job interviews and tests.

Providing students with soft-skill training will make them industry-ready and improve productivity from day one. “In most cases, freshers don’t realise this quickly. Yes, it takes time, but if a student gets into a job, they will probably learn this faster.”

In the end, it boils down to the student’s ambitions. Typically, when a student takes up admission in an engineering college, they have been told that career-wise, there will be opportunities. “These are the kind of dreams shaped by society and parents,” said the cofounder.

The reality is quite different. Unfortunately, a lot of students try hard to get into large companies and either stall when it comes to growth, or many look for further education. A lot of awareness and handholding is required for colleges and students to understand the ground realities of the market.

“Students have to realise that they need to build a backup for themselves, even if they are interested in their core engineering stream or government jobs, they need to be open about other opportunities around them, there is nothing wrong in taking up sales, customer support or business development jobs. It is something that we have to motivate them and help them understand the pros and cons of both the sides,” said Burad.

Trust-building is key for students and colleges, so that they are ready to walk the extra mile with AccioJob and be able to deliver value for the courses that they offer, said the cofounder. So far, the company is using word-of-mouth referrals as its go-to marketing strategy. Digital ads and marketing campaigns have not had the same impact in terms of visibility. Given that AccioJob typically charges INR 2K-3K per course, it cannot afford to have a huge marketing budget.

“Since we have partnered with colleges and universities, we want to provide that experience, which we believe will help students. Our past experiences in conducting offline seminars have definitely worked in our favour,” he added.

Given the present woeful state of the job market, the startup has had to put on hold plans such as job guarantees which will help build further trust among students and colleges. “We will make this happen, even if it takes us some extra amount of time, money and coaching sessions. That is something which will be a win-win situation for both of us,” said Barud, optimistically.

Sharing the future plans, Barud said that AccioJob will be expanding into non-technical courses in the coming months with long-term plans for technology skill development. “We still haven’t thought of covering the tech domains yet, but we will surely try to include it as we scale our business. These courses will be a little expensive, but we want to add the job guarantee component to it,” he concluded.