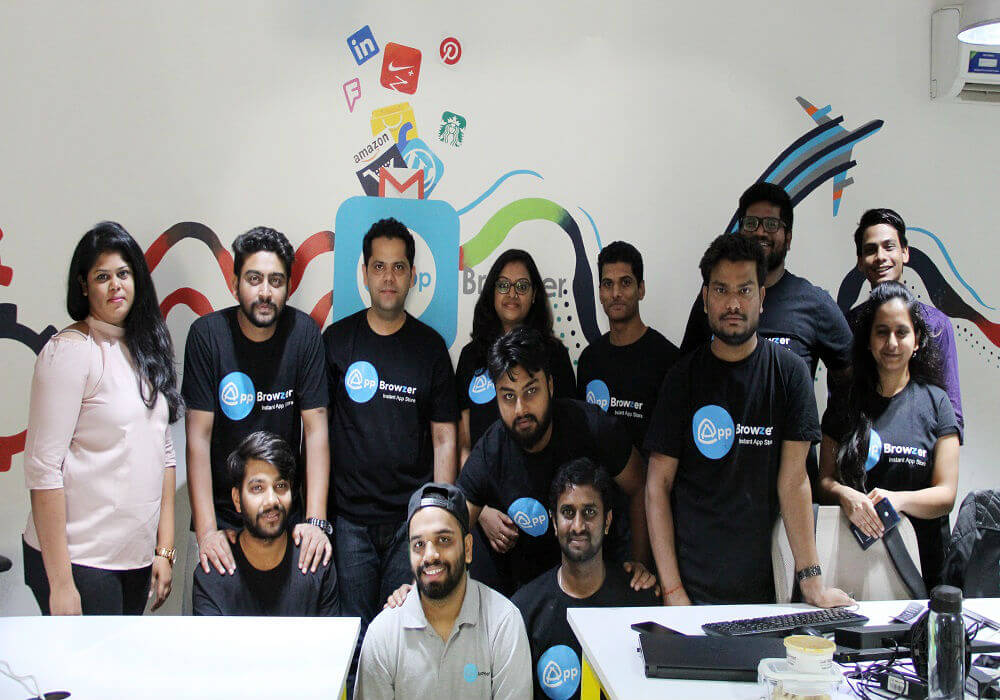 There is no doubt that this is the time for a booming app economy. While hordes of apps which are populating the Play Store and iOS store enable the users to do everything –  from ordering food to booking a cab to calling a carpenter, the increase in the sheer number of the apps also make their discovery hard. It is this problem of discovery in the app ecosystem which founders Sunny Gurnani and Venkatesh Rao of instant or express app store AppBrowzer wanted to solve initially.

Says Sunny, “We have hundreds of apps in the Play Store and Apple Store but we use very few in our daily lives. We hardly have 20-25 apps on our phone. But the fundamental problem with the current apps is that I need to download them and install them in order to use them. So, as a user, I need to give my phone real estate or space to an app to use its service.” 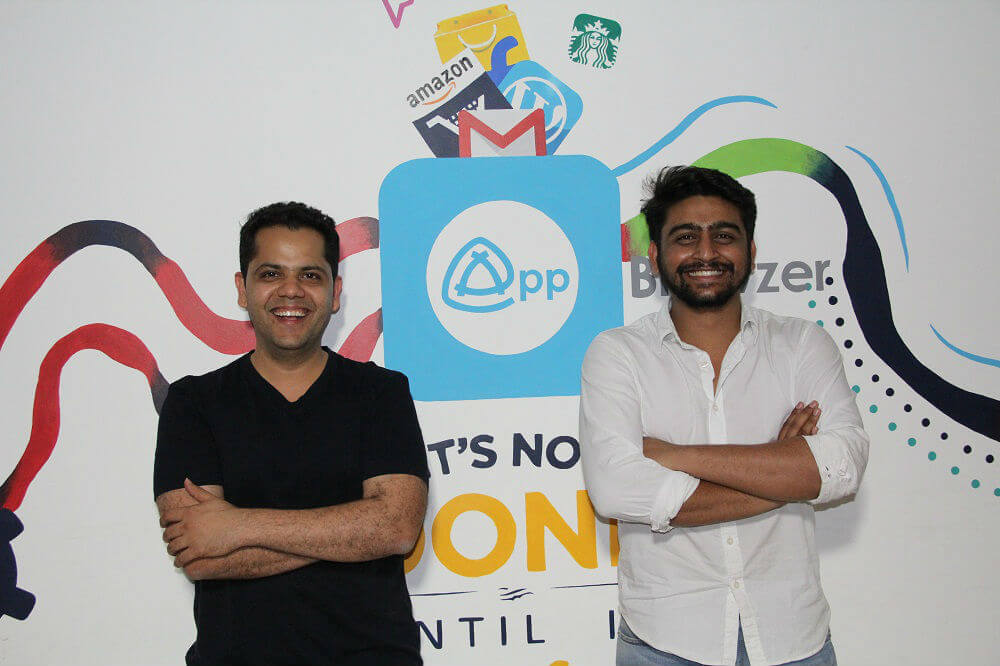 With a low-end smartphone (which majority of the Indians users have), consumers hit a space problem. “Also, the phone becomes very slow after a user downloads say 20 apps, 50 videos, and a couple of hundred photos,” he added.

Thus, the duo hit upon the idea of not just providing the Indian app users a curated app experience but also to optimise their phone space and to help them discover multiple mobile apps in a single place. Hence, AppBrowzer was born in 2016, and aimed to provide app users with a curated experience where a customer could download AppBrowzer and do most of the activities he or she does from a single mobile app than downloading multiple apps.

“We have an aggregated news app, recharge and bill payments app, Zomato’s food app to order food, Uber app to order a cab and  MakeMyTrip to book flights ,” says Sunny. 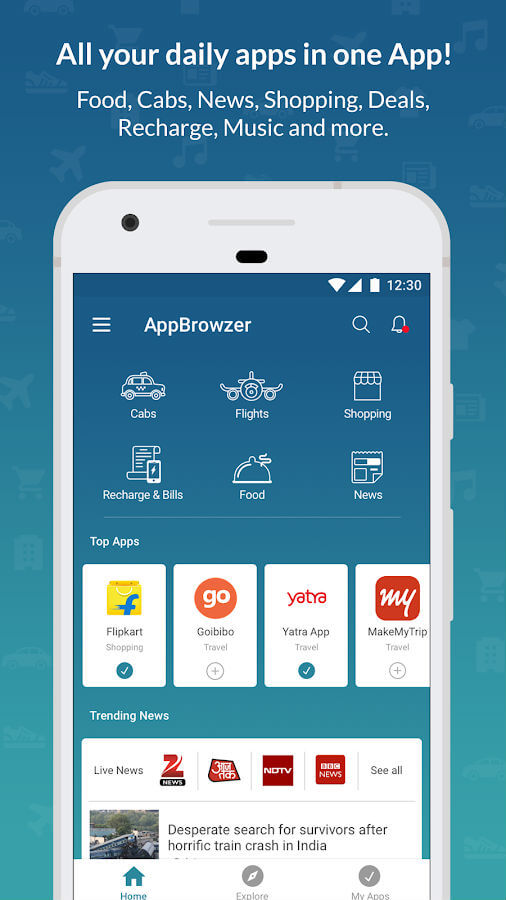 Apart from solving the consumer-side of the problem, the startup has taken a step further by launching its business platform last month to help the retail and service-based businesses to create express apps in less than 10 minutes and reach out to the existing and new customers.

Sunny says that while there are so many apps in the App store, one hardly sees apps of local businesses to reach out to their consumers. Thus, a local restaurant or a salon won’t have a mobile app as they are hard to build and are expensive. Also, they don’t have the technical skills to build those mobile apps. For them, the startup has a B2B platform where businesses can use the platform to create a mobile app in less than 10 minutes.

In order to do this, all they have to do is share their product list and prices and choose a design to create an express app. So, just like the other apps in AppBrowzer, a user does not need to download these apps individually to use them.

In addition to the popular Indian apps like Flipkart, Amazon, Zomato and the likes, AppBrowzer also enables its users to discover local business apps in its local app section. It does so by picking up the user’s location.

Thus, users can access both popular as well as local business apps through AppBrowzer.

“We try to solve both the consumption as well as the creation problem in the app ecosystem. While on the consumer side, the challenge is that one needs to download apps to use them. On the other side i.e., business, there is a challenge of building an app which can easily cost $4.6K-$6.1K (INR 3 Lakh-INR 4 Lakh),” adds Sunny.

Thus, with its new B2B platform, the startup is also focussing on the creation of the mobile apps while also solving consumption problem on the B2C side.

For the mobile apps which have a massive user base, for instance Ixigo, Zomato and Uber, AppBrowzer has partnered with the company and has picked up the content in the form of SDKs or APIs, to create these express apps for them.

Meanwhile, the local businesses use the builder platform to create their apps themselves. The startup claims it would hardly take 10 minutes for a business to create a full-fledged application and start selling. One can either choose the payment gateway option by providing bank details and KYC or use the default cash on delivery option provided on the platform.

The builder platform is an easy as a plug-and-play option to create Express Apps and has been liked by quite a few home-based businesses, claims Sunny.

The startup also plans to launch a feature, where it will have a notifications page inside AppBrowzer settings where a user can control and switch ‘ON/OFF’ the notifications from each express apps.

With 275K Users, The AppBrowzer Platform Is Gunning For 1.3 Mn Users By Year End

The AppBrowzer consumer app was launched in March 2017 and the first few months were focussed on building the install-base than the revenues. Currently, the platform boasts of 2,75,000 users using the mobile app, with the total apps on the AppBrowzer now standing at 200. Meanwhile, more than 25 businesses have created apps using its builder platform since its launch last month.

Sunny reveals that in the first few months, the app’s customer base mainly comprised of college students given the fact that they were mostly low-end smartphone users who face the space crunch problem on their phones.

So, in multiple colleges, the startup recruited college ambassadors which helped it to gain virality by offering them apps in entertainment and in education such as  TedX and Khan Academy.

However, once the platform started partnering with Zomato, Ola and the likes, the team realised that it needed to tap other avenues for monetisation. It was then that the startup resorted to Facebook and Google to market the app to a wider audience. 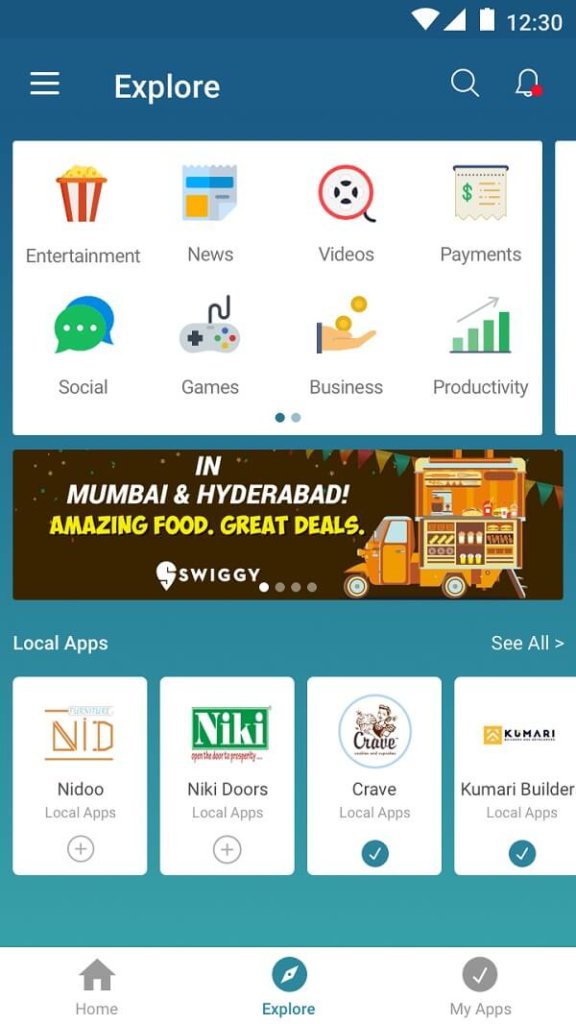 The decision to launch the B2B platform last month was  a strategic one as the startup first wanted to build a formidable consumer base so that local businesses would come in to build their express apps. The B2B platform offers a 30-day trial period and as per the startup’s claims, 60-70 businesses are testing it without going public yet. For publishing the app, they pay $7.69 (INR 500) per month or $92.3 (INR 6000) per year.

The startup monetises in two ways.

As far as funding is concerned, the startup raised $500K in March last year led by angel investor Deepak Gurnani, who is a member of the Singapore Angel Network. A group of angel investors also participated in the round.

By December this year, the startup is looking to onboard 1.3 Mn users for its consumer apps. Meanwhile on the B2B platform, the team of 18 plans to have 1,800 express apps from local businesses by the year-end, from the current figure of 30.

AppBrowzer, Instant Apps And The Competition

Instant apps have been in the news for a while. Google had started offering Instant Apps in May 2016 where Android users would be able to use apps from a link without having to download anything from the Play Store.

However as per Sunny, Google’s focus is to solve consumer problems, hence it provides instant apps for users so that they can try some apps instantly before using. For that, Google requires an app to be present on the Google Play Store and then breaks it up into individual chunks and serves it to users as an instant app.

But developers are not its focus. So, as a developer, one still needs to go through the pain of building an app and putting it in Playstore which takes two to three months time. For a business to create a simple ecommerce app, it would take roughly the same time. This slow process  does not help the developer as he still needs to create a mobile app and then make it instant.

Moreover, Google’s primary money comes from the ‘search and install’ of the mobile applications. So, every time a user installs a mobile app, the business pays advertisement money to Google. Hence, while Google did start the instant app as a project three years back to enable users to access instant apps, the focus has not been a major one, especially for the developers.

However, there is no dearth of competitors in both the B2B and B2C market. For instance, Tapzo, on the consumer side, aggregates 10-15 mobile mini-apps in one place. But it doesn’t have a platform for B2B businesses to create their express apps. Then, there are a lot of business focussed applications like GoodBarber which helps build Progressive Web Apps or Goodbox which helps one create a mobile application in a half an hour.

Sunny however points out that since the above-mentioned competitors are focussing just on B2B side, businesses might struggle with getting consumers on to the app. AppBrowzer’s long term focus is to get more consumers for businesses and thus, provide both B2B and B2C solutions.

As per the App Annie 2017 Retrospective Report, India overtook the US to take the second spot in terms of the number of app downloads in 2017. China took the first spot, with four of the top five countries by downloads in the emerging markets.

Meanwhile, globally there’s been a 60% growth in the number of app downloads with downloads exceeding 175 Bn. Consumer spending has more than doubled from 2015 and surpassed $86 Bn. Additionally, time spent in apps spiked by 30%, to the point where each user spends about 43 days per year in apps.

These statistics are not surprising given the explosive growth of mobile, Internet and the app economy in India. In Q4 2017, in India, as per the same report, users spent almost 50 Bn hours in apps during the same time frame. App usage grew rapidly in India, on account of the introduction of subsidised, unlimited 4G access  by Jio in September 2016. According to the report published jointly by the Internet and Mobile Association of India and Kantar IMRB, titled ‘Internet in India 2017’, the number of Internet users in India is expected to reach 500 Mn by June 2018.

In light of this backdrop, AppBrowzer is looking at a considerable opportunity as far as the burgeoning app ecosystem in India is concerned. But the fact also remains that smartphones are getting cheaper and more powerful, the consumer problem of real estate crunch on the phone might cease to be that big a problem.

However, AppBrowser still has the potential for developers and local businesses as it tries to create a parallel PlayStore for instant apps. How far can it provide the much-needed audience to local businesses in the overcrowding environment as well as stay ahead of its competitors will be something that will determine its success.