The Story Behind the Guy Who Told VCs They Screwed Up

The Story Behind the Guy Who Told VCs They Screwed Up 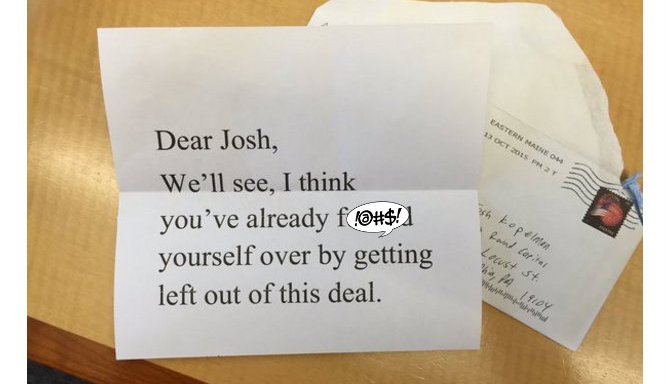 I’ll be the first to admit it: I’m a sucker for someone who bucks tradition and tries something unconventional and new.

In my opinion, there are far too many people who look and act alike in this world. I’m a big believer in that if you want to make your mark, you need to be bold. You need to take a left when everyone else is going right.

Yes, that sometimes means that your approach will lead to a dead end or, worse yet, a disaster. But what the hell, at least you went out in style.

And, who am I to blame them? The difference between first and second place can be enormous. Look no further than Uber and Lyft, with a delta in market value in the 10s of billions of dollars. That’s billions, with a “B.”

If you’re a startup founder looking to raise money, you undoubtedly need to be bold. You need to show VC’s that you have the conviction and chutzpah to come across the finish line with a first place ribbon.

Having that level of belief and conviction in your idea can leave any entrepreneur feeling entitled to funding. Or, at the very least, offended that someone didn’t see it the same way they did.

And to be fair, it doesn’t help that VCs are admittedly not always right.

Which leads us to this tweet from Josh Kopelman, a well-known and respected VC with First Round Capital.

Well…that’s one way to respond when a VC passes… pic.twitter.com/C5WWYnk5KV

According to the narrative, the sender of this letter (who we now know to be Alex Hammer, founder of Media 2.0, a “smart e-commerce” company) is a disgruntled and entitled entrepreneur who has been rejected by not just Kopelman, but also Bessemer and Menlo Ventures.

His letter, hand addressed and sent through the actual mail, would indicate that this were the case.

However, as often the case, I believed that truth lay somewhere in between (at least I hoped), so I reached out to Hammer to get his side of the story.

After following the tweet stream, it appeared to me that Hammer was indicating (although, not too effectively) that this wasn’t a response to a rejection, but rather an attempt to get the attention of VCs.

When asked that question, he confirmed my suspicion by stating that, “Yes, it’s just about breaking through the clutter. I have never met with Josh, etc., or spoken with him either to my knowledge.”

Thankfully, Mr. Hammer is just an entrepreneur with a bold vision to disrupt Amazon and tried an unconventional approach to getting his message across.

As for VCs, he stated, “I do think the top VCs have earned their stripes, and I very much respect and admire them. However, if you read in the link above the part about the VC industry, it is much harder for truly disruptive ideas to be funded.”

While Hammer’s unique attempt at raising money may not have worked as planned (at least yet), you can’t fault the guy for being bold. If for no other reason, he has at least been successful at generating some attention (which isn’t easy these days).