The Arrival Of Netflix In India: All That You Need To Know

The Arrival Of Netflix In India: All That You Need To Know 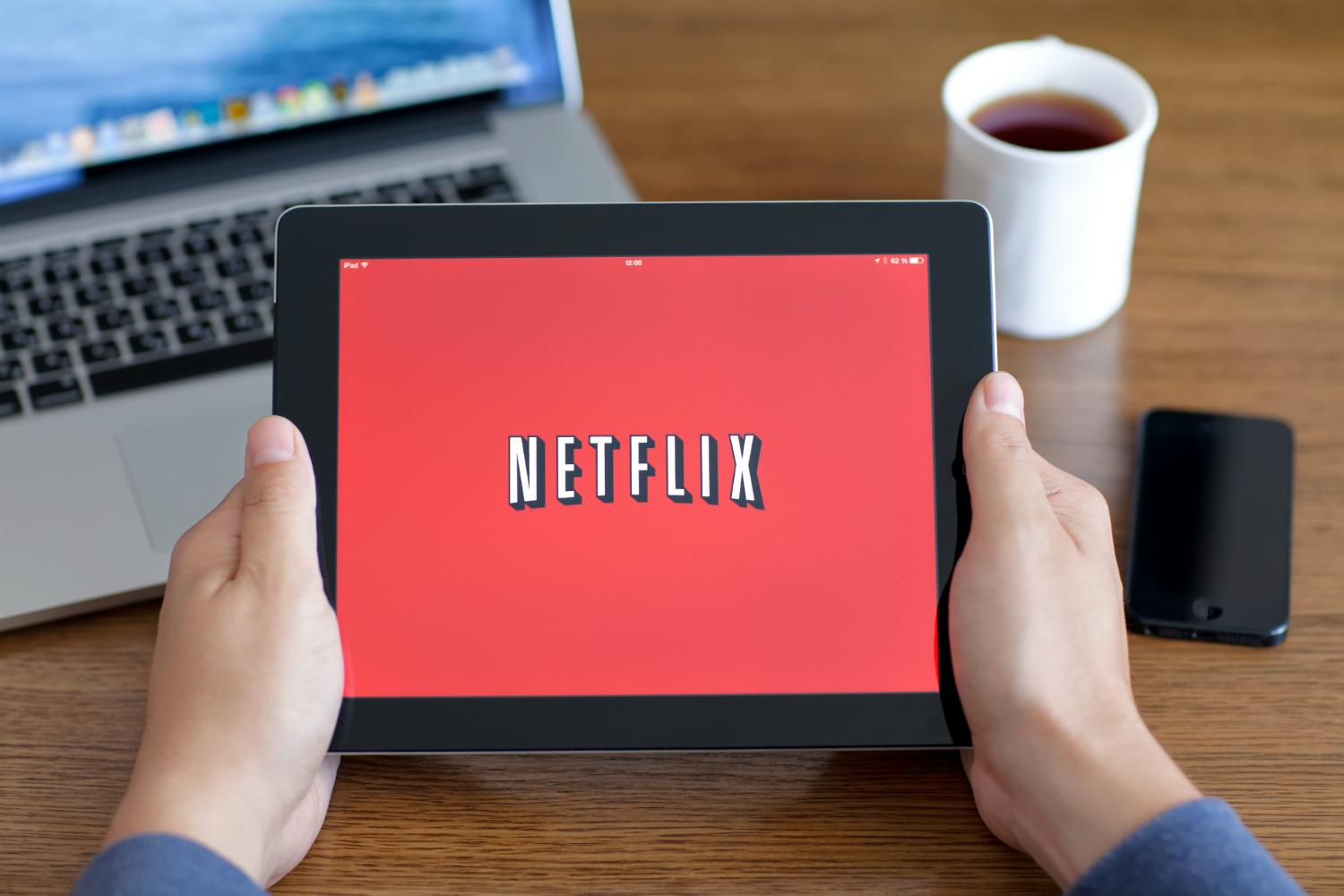 The wait is finally over! The ongoing Consumer electronic technology conference CES in Las Vegas witnessed the much awaited announcement of Netflix’s expansion into India and over 100 different countries around the world including UAE, Pakistan and Russia.

“Right now, you are witnessing the birth of a global TV network” – Reed Hastings, the Chief Executive of Netflix announced from the stage in his keynote address ending months of speculation about its entry to India, one of the fastest growing digital markets in the world. To add a dash of color to the occasion, a montage of global flags rolled in the background screen followed by the map of the world with #netflixeverywhere displayed on top of it. Shares of the company immediately jumped 9.3% to close at $117.68

2015 was an exciting year for the online video ecosystem in India with biggies like Eros Now and HotStar entering the VOD (Video On Demand) fray. We, at Vidooly were keeping a keen watch on this tectonic shift in the video entertainment space in the country. We knew that it was just a matter of time before Netflix made its entrance and finally that time has arrived.

Before this launch on Wednesday, Netflix had expanded into more than 60 countries across the globe. However, in its stronghold United States, the growth had slowed down last year. This aggressive global expansion was in fact crucial for the company. Even though US has about 100 million households with broadband connection; it is just a fraction of the global count of 730 million broadband connected homes. And tapping into this customer base is vital for the company if it has to tackle competition from the likes of Amazon, Hulu, Showtime and YouTube.

Mr hastings said that Netflix is currently used in over 70 Mn homes across the globe and is expecting to reach 60 to 90 million households in United States alone in the near future. But he is cautious enough not to set an international target.

How It Will Work In India 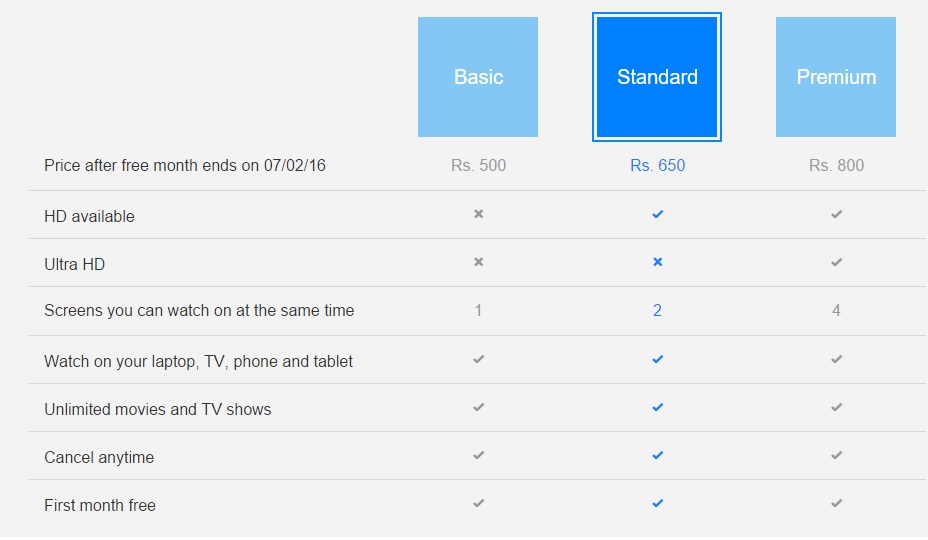 While signing up, you need to use your Credit Card to start the one-month Free trial. Do note that, a remittable fee of INR 70 will be deducted when you sign up and you will be notified two days before you get charged for the next month subscription.

The Reserve Bank of India in 2014 had mandated that e-payments that do not involve a card swipe must be authenticated by an online banking PIN number or a one-time password which is sent to the user through a text message or an email. But Netflix saves the card details of the customer without an OTP or an I-PIN.

Our take: Netflix can probably solve this issue by partnering with an Indian online wallet product like Paytm or Mobikwik.

What It Means To Existing OTT Players In India

Netflix’s pricing is quite similar to the one it has in the United States. It remains to be seen whether the average Indian consumer is ready to shell out the relatively steep price. Considering the fact that its counterparts like BoxTV, Eros Now, Hooq.tv and Hungama charge considerably less for their subscriptions, Netflix might be forced to cut down the pricing some time later this year.

India saw an explosion in the number of OTT platforms like Yupp TV, Ditto TV, Spuul etc just recently in 2015. It will be interesting to see how Netflix’s entry is going to ruffle up the young OTT market here. The Indian players need not panic however. Internet penetration is increasing exponentially and an average India now spends more time on his smartphone (3 hours and 18 minutes) than on TV (2 hours and 8 minutes). Netflix’s entry just goes on to validate the burgeoning digital content business in the country.

As of now, Netflix has limited Indian content and they’re working on getting more content partners onboard. However, the Bollywood library does include popular movies like Hum Aapke Hai Kaun, Piku and Lootera. However, the International selection is quite good (despite the fact that it is not as expansive as the one in US) with most popular movies, documentaries and TV Shows. Dexter, Orange is the new black, That 70’s show etc are available for binge watching. But surprisingly, House of cards, the Netflix original series is missing from the library! This might be due to licensing issues since it is being aired on Zee Café here in India. 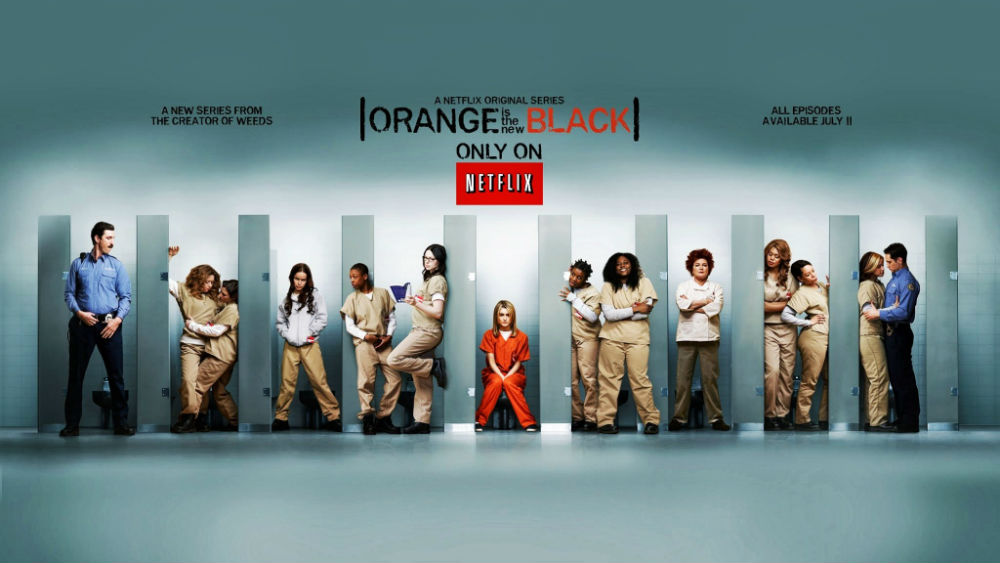 In 2016, Netflix is aiming to spend more than $6 Billion in cash on original content programming; with plans to release 31 new and returning original series’, 24 films and documentaries and 30 original children series and stand-up comedy specials.

According to conservative estimates, internet users in India consumed an average of 765 MB of data a month as of September 2015. And majority of it is used for streaming music and video. According to Netflix, customers would need a minimum of 3MBPS connection to stream content in SD and 5MBPS in HD. And streaming content continuously for an hour would use up about 1 GB data which is more than the average monthly usage of Indian internet users!

But, for internet connections that do not worry about data caps, the service works pretty smooth irrespective of relative drops in the speed of the internet. For instance, you can stream videos smoothly on a 1 MBPS connection with an initial buffering of 20-30 seconds.

Although Netflix has a rating system for movies and shows hosted on its platform, the content is still uncensored. This rating system is developed by Netflix in-house and is more aligned with the global rating systems. The information and broadcasting ministry of India is yet to review its content.

Since uncensored programming is one of the important pulls of the platform, it’ll be interesting to see how Netflix is going to go about handling this issue in the future. Indian Twitteratti however is having a field day with its funny take on how our ‘sanskaari’ censor board is going to react to some of the content hosted on the site.

Where Is It Headed?

“Whether you are in Sydney or St. Petersburg, Singapore or Seoul, Santiago or Saskatoon, you now can be part of the Internet TV revolution,” Mr. Hastings said while announcing the expansion at CES. If he has to deliver this promise of Internet TV revolution, Netflix has to find ways of onboarding local talent from across the globe. It should also figure out what content works not just in the US but also in countries like India, Saudi Arabia and Russia. Another issue is that currently, the availability of its original content differs from country to country because of the licensing deals. It has to find a way to tackle this problem as well.

Throughout the year 2015, Netflix was running at a break-even profitability and is looking to deliver profits by 2017. If it has to achieve this feat, it needs to keep up the momentum and deliver its promises. A few months down the line, we’ll definitely have a clearer picture of where all this is headed. Whatever be the case, it sure is a good time for internet content consumers.