Startups On The Screen: 14 Shows For Budding Entrepreneurs Looking To Binge-Watch

Startups On The Screen: 14 Shows For Budding Entrepreneurs Looking To Binge-Watch

While it provides a range of content, shows related to the story and life of startups and entrepreneurs seem to be gaining a lot of interest

Which are the top shows and movies that are making it big in this genre? 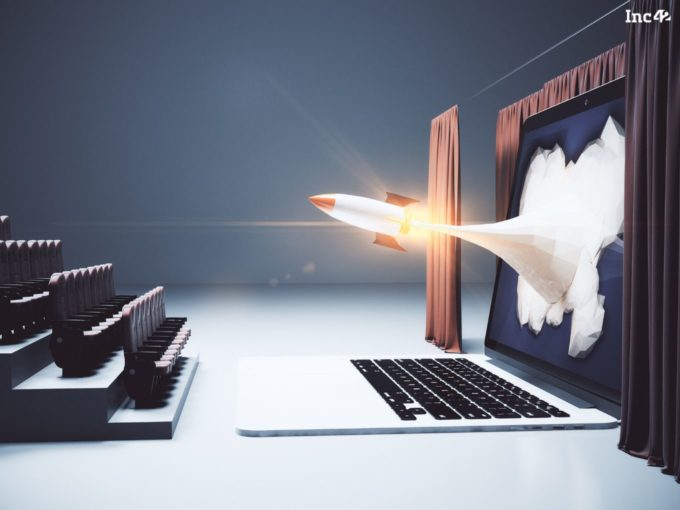 While it is estimated to grow at a CAGR of 21.82%, reaching over $1 Bn by 2023, the big revolution is coming in the form of content from across genres and across languages.

Among the favourites of the binge-watching generation, are shows that span various genres, and one particular trend is visible among much of the new content on OTT or video streaming platforms — one of movies and shows based around entrepreneurs and startups.

So Inc42 decided to revisit some of the most interesting and insightful movies and shows around startups, and we found a bunch that fit the brief.

What makes startups a great fit for TV shows and movies?

Simply put, these stories naturally have the element of conflict that’s the hallmark of great digital entertainment. Engaging with such a setting or environment is relatively easier for viewers, especially the audience for OTT platforms — largely comprised of young Generation Z workers and slightly older millennials.

Startups go through a lot of tumults in their journey and the various associations they form in this journey often produce great characters (on-screen) and also a great character (among the protagonist).

As a result, such projects are not only great for viewers but also the artists behind them — after all which actor wouldn’t want to doesn’t want to play a part that involves ups and downs, tragedy and victory, swings of arc.

Films and shows may be an escape from reality for some, but puts viewers right in the middle of a realistic story.

Let’s start with the one that’s called StartUp! The US web series created by Ben Ketai, stars Martin Freeman, Adam Brody, Edi Gathegi, Addison Timlin and others in a story all about a tech startup’s journey. The twist? Their investor might not have earned money the legal way, and so it’s equal parts organised crime thriller and a show about building a business. A must watch for those who have subscribed to Amazon Prime Video.

This India production Netflix original movie revolves around three college graduates chasing success with their healthtech startup. The evolution of their relationships as their startup goes through the roller coaster is a highlight of this film. It reveals the efforts, sacrifices, ambitions and repercussions of working with friends to make an entrepreneurial dream come true. Watch for the insights into how friends change when launching a startup together.

If startups don’t know this one, we’re out!

Just kidding — Shark Tank is the show that makes “wannapreneurs” weak in the knees. The reality show which involves a startup pitch is most famous for the celebrity investors that form the jury. It’s managed to attract attention to startups such as Copa Di Vino, Lollaland (earlier known as Lollacup), and Scrub Daddy. It’s most famous participant is Ring, which was rejected on the show, but was subsequently acquired for $1 Bn by Amazon.

Run a tech startup and haven’t watched Silicon Valley? You don’t know how to have fun. A tongue-in-cheek look at Silicon Valley, the biggest startup hub of the world, this depicts the lives of programmers and coders who are trying to make it big in the savage and brutal world of the Valley! But with tons and tons of laughs! Currently in its sixth season, the series has names such as Thomas Middleditch, Kumail Nanjiani and Martin Starr in lead roles.

6. Planet Of The Apps

This television reality show, similar to Shark Tank, is solely based on mobile apps. Aspiring software developers pitch their ideas under 60 seconds to a panel of judges hoping for a six-week partnership. The judges include entertainer-entrepreneurs such as Jessica Alba, Gwyneth Paltrow, William Adams (aka will.i.am) as well as startup guru Gary Vaynerchuk. Catch it on Apple TV+ which has just launched in India.

Following the rise and fall of a fashion empire called Nasty Gal, this series is inspired by the eponymous bestselling book written by Sophia Amoruso. The lead character is played by Britt Robertson who brings a peppy vibe to this series about going independent, as the Girl Boss looks to build up an online fashion empire. Though it was cancelled after one season, it is definitely a fun watch for the weekend on Netflix.

Depicting the life of a young scientist who wants to save lives but needs massive funding to bring her idea to the market, this show has A-listers such as Renee Zellweger, Jane Levy among other actors. While plenty of venture capitalists turn her down, Zellweger’s Lisa gets an offer from a wealthy woman and subsequently struggles to manage her personal and professional life. Considering that the show is about a pharma startup, the similarity to the real-life Theranos episode is uncanny.

Released way back in 2015, this Indian series has become a byword for startup shows among Indian digital consumers. It even spawned the catchphrase ‘Tu Beer Hai’ or you are beer — you really have to watch it to get it. While it gained a lot of interest when it was aired, the second season of the show has still not been announced even after pleas from fans. The series had the cast of Jeetendra Kumar, Naveen Kasturia, Abhay Mahajan and Arunabh Kumar and is still available on TVF Play app for viewing.

Not quite a startup, but there was a lot of revenue — ill-gotten or not. A chemistry teacher a terminal diagnosis decides to make methamphetamine or meth with a former student to pay off his debts and secure his family. A noble thought, but with terrible consequences. Still haven’t got on the ‘Bad’ train? Start this weekend!

Follows the everyday drama at a law firm as spiffily-dressed corporate lawyers thrash out business deals and lawsuits. There’s a great deal of affluence on display here, so early-stage startup founders might want to brace for impact. Follow the lives of Harvey Specter, Jessica Pearson, Louis Litt and Mike Ross as they navigate the strange world of corporate law — plus there’s an insight or two on how to crack a startup funding or acquisition deal.

The modernised version of the 1980s series with the same name is about two of America’s wealthiest families as they fight over the control of fortune and family. Available on Netflix, this series shows behind-the-scenes of building a massive corporate empire and the everyday drama that goes into keeping it standing.

Even if you have watched The Office, you probably don’t mind watching it again. Life in a small branch of a major company can be idyllic but not if it’s the Dunder Mifflin Paper Company’s branch in Scranton, Pennsylvania. Hilarious, iconic and meme-a-minute, The Office is a must-watch — regardless of whether you are connected with startups in any way.

The newest sensation among shows that deal with the business world, Succession is an edge-of-the-seat drama about the life of the Roy family, a fictional mega-rich American media family, as the ageing head looks to phase out his reign as CEO and his three kids — and a host of riveting characters — bicker over who gets to take over. Political, relevant and with great insights into the shrewd world of Big Media.

With inputs from Harshil Khatter and Prashasti Bhatt