Two startups with the same idea – one got success and the other was doomed. The world is full of such examples where an idea that turned an entrepreneur to a billionaire, didn’t even made a penny for the other.

For instance, the first video sharing website was founded in 1997, much before Vimeo and Youtube, shareyourworld.com. Before Google, there was AskJeeves and before Groupon, there was LetsBuyIt.com. For most startups out there, someone have given it a shot earlier. So, why is that they failed and the others succeed?

Here is an answer to this from Bill Gross, an american financial manager and author.

Five Factors That Account For Startup’s Success and Failure

Bill believes that the startup organization is one of the greatest forms to make the world a better place. “If you take a group of people with the right equity incentives and organize them in a startup, you can unlock human potential in a way never before possible. You get them to achieve unbelievable things.”

But if the startup organization is so great, why do so many fail? “That’s what I wanted to find out. I wanted to find out what actually matters most for startup success. And I wanted to try to be systematic about it, avoid some of my instincts and maybe misperceptions I have from so many companies I’ve seen over the years.”

As Bill highlights that, he wanted to know this because he had been starting businesses since he was 12 years old. “The first one when I sold candy at the bus stop in junior high school, to high school, when I made solar energy devices, to college, when I made loudspeakers. And when I graduated from college, I started software companies. And 20 years ago, I started Idealab, and in the last 20 years, we started more than 100 companies, many successes, and many big failures. We learned a lot from those failures.” 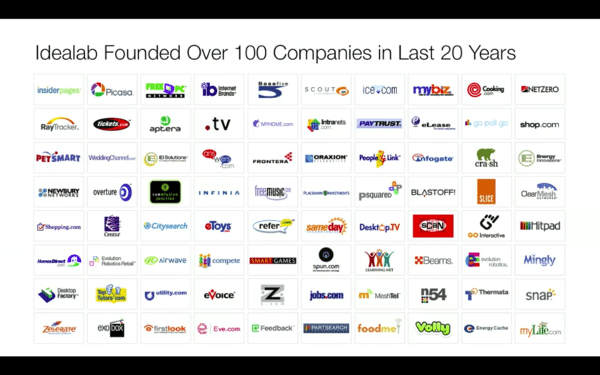 Bill came across five factors that accounted the most for the company success and failure.

First, the idea. He used to think that the idea was everything. “I named my company Idealab for how much I worship the “aha!” moment when you first come up with the idea.” But then over time, he came to think that maybe the team, the execution, adaptability, that mattered even more than the idea.

“I never thought I’d be quoting boxer Mike Tyson, but he once said, “Everybody has a plan, until they get punched in the face, and I think that’s so true about business as well,”. So much about a team’s execution is its ability to adapt to getting punched in the face by the customer. The customer is the true reality. “And that’s why I came to think that the team maybe was the most important thing.”

He then had a look at the business model. Does the company have a very clear path generating customer revenues? “That started rising to the top in my thinking about maybe what mattered most for success.” Then came the funding. Sometimes companies received intense amounts of funding. Maybe that’s the most important thing?

And then. the timing. Is the idea way too early and the world’s not ready for it? Is it early, as in, you’re in advance and you have to educate the world? Is it just right? Or is it too late, and there’s already too many competitors?

Time Is The Key

So first, on these Idealab companies, the top five companies — Citysearch, CarsDirect, GoTo, NetZero, Tickets.com — those all became billion-dollar successes. And the five companies on the bottom –Z.com, Insider Pages, MyLife, Desktop Factory, Peoplelink — (we all had high hopes for, but didn’t succeed.) 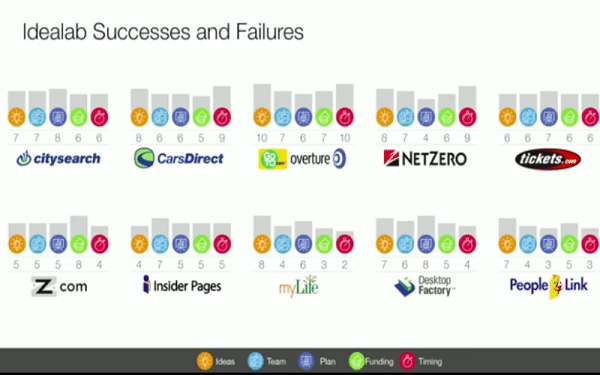 He tried to rank across all of those attributes how he felt those companies scored on each of those dimensions.

And then for non-Idealab companies, he looked at wild successes, like Airbnb and Instagram and Uber and Youtube and LinkedIn. And some failures: Webvan, Kozmo, Pets.com Flooz and Friendster. 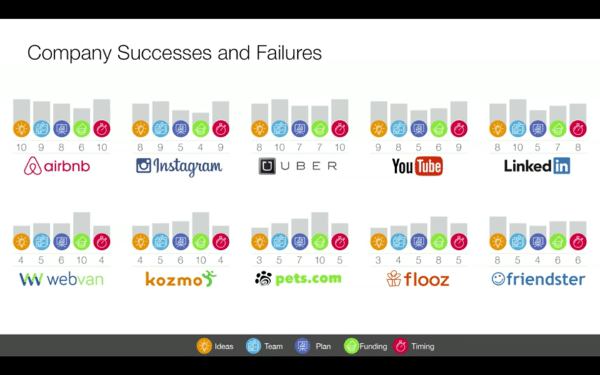 “The bottom companies had intense funding, they even had business models in some cases, but they didn’t succeed. I tried to look at what factors actually accounted the most for success and failure across all of these companies, and the results really surprised me.” 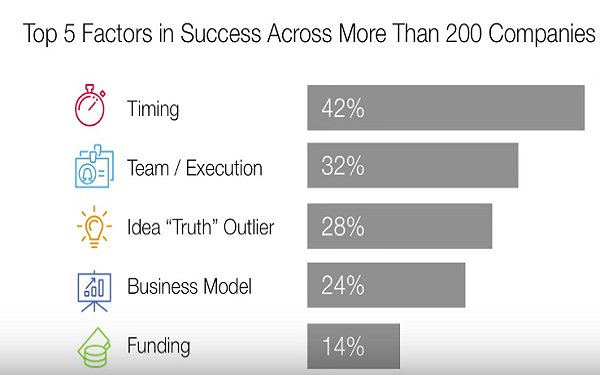 “Now, this isn’t absolutely definitive, it’s not to say that the idea isn’t important, but it very much surprised me that the idea wasn’t the most important thing. Sometimes it mattered more when it was actually timed.”

For Bill, the last two, business model and funding, made sense for being so low.  “I think business model makes sense to be that low because you can start out without a business model and add one later if your customers are demanding what you’re creating. And funding, I think as well, if you’re underfunded at first but you’re gaining traction, especially in today’s age, it’s very, very easy to get intense funding.”

The Proof: Examples Of A Few Achievers As Well As Failures

He further gave some specific examples of each of these. For instance, Airbnb was famously passed on by many smart investors because people thought, “No one’s going to rent out a space in their home to a stranger.” Of course, people proved that wrong. But one of the reasons it succeeded, aside from a good business model, a good idea, great execution, is the timing.

That company came out right during the height of the recession when people really needed extra money,and that maybe helped people overcome their objection to renting out their own home to a stranger.

Same thing with Uber. Uber came out, incredible company, incredible business model, great execution, too. But the timing was so perfect for their need to get drivers into the system. Drivers were looking for extra money; it was very, very important.

“Some of our early successes, Citysearch, came out when people needed web pages. GoTo.com, which we announced actually at TED in 1998, was when companies were looking for cost-effective ways to get traffic. We thought the idea was so great, but actually, the timing was probably maybe more important.”

He then talked about some of their failures. He shared about started Z.com, an online entertainment company. The money was there, they had  a great business model, they even signed incredibly great Hollywood talent to join the company. But broadband penetration was too low in 1999-2000. “It was too hard to watch video content online, you had to put codecs in your browser and do all this stuff, and the company eventually went out of business in 2003.”

Just two years later, when the codec problem was solved by Adobe Flash and when broadband penetration crossed 50 percent in America, YouTube was perfectly timed. “Great idea, but unbelievable timing. In fact, YouTube didn’t even have a business model when it first started. It wasn’t even certain that that would work out. But that was beautifully, beautifully timed.”

In summary, execution definitely matters a lot. The idea matters a lot. But timing might matter even more. And the best way to really assess timing is to really look at whether consumers are really ready for what you have to offer them.

“As I said earlier, I think startups can change the world and make the world a better place. I hope some of these insights can maybe help you have a slightly higher success ratio, and thus make something great come to the world that wouldn’t have happened otherwise.”