When we started our SaaS company, we had more than a decade of experience in the industry – 13 years to be exact! Being in SaaS sales for such a long time helped us understand how the system works and gave us a different perspective about the process. Traditional methods will not cut it when you are selling to the global market.

The Blinding Taste Of Success

Initially, our sales process hinged on the tried and tested method where the targets for sales personnel were revenue-based. We set a number we thought was high enough, taking into account the annual targets specified. Surprisingly, the team kept achieving these targets easily and as it is the norm, we kept increasing them, month-on-month.

The success blinded everyone and everyone was happy with the numbers, it was completely on us to optimise.

We pushed our targets a notch higher and still were able to achieve it! New sales hires were given ~600 leads to achieve the target revenue. The leads were sliced and diced based on regions – the East & West coast. This was perhaps a mistake on our part since revenue largely hinged on the leads that were given to the sales guys. We understood that to further optimise the process, the number of leads had to be brought down while the revenue goal remained the same.

Optimise Till You Find The Sweet Spot

Now that we understood the reality, we started to optimise. Instead of giving our sales guys a healthy number of leads to play with, we cut down on the number of leads provided and urged the team to hit the same revenue numbers.

We persisted tweaking and, in the end, were able to find the sweet spot for the number of leads that can generate the same revenue. Our sales model targeted SMBs and to sell our SaaS product and generate $130k in revenue, our team required just 300 SMB leads a person. 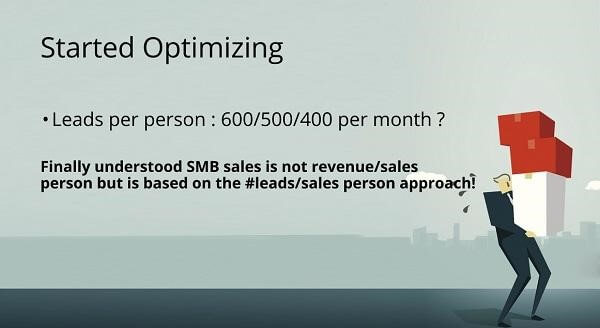 The lesson we learnt was not to categorise leads based on region or give revenue-based targets for your sales team. Instead, minimise the number of leads given and get the most returns possible from your leads.

Now that we have our own SaaS company and a product to sell to the global market, we hire talent for our sales team not based on the revenue they can generate but based on the number of leads they consume to generate the revenue. This has been our mantra and it gets the optimal performance out of your sales team.

[This article is the first part of a series co-authored by Arvind Parthiban and Arunkumar J of Zarget. Arvind, Zarget’s CEO & Co-Founder is a Marketing and Pre-Sales person and Arunkumar is the COO & Sales Head of this SaaS firm that is making waves.]