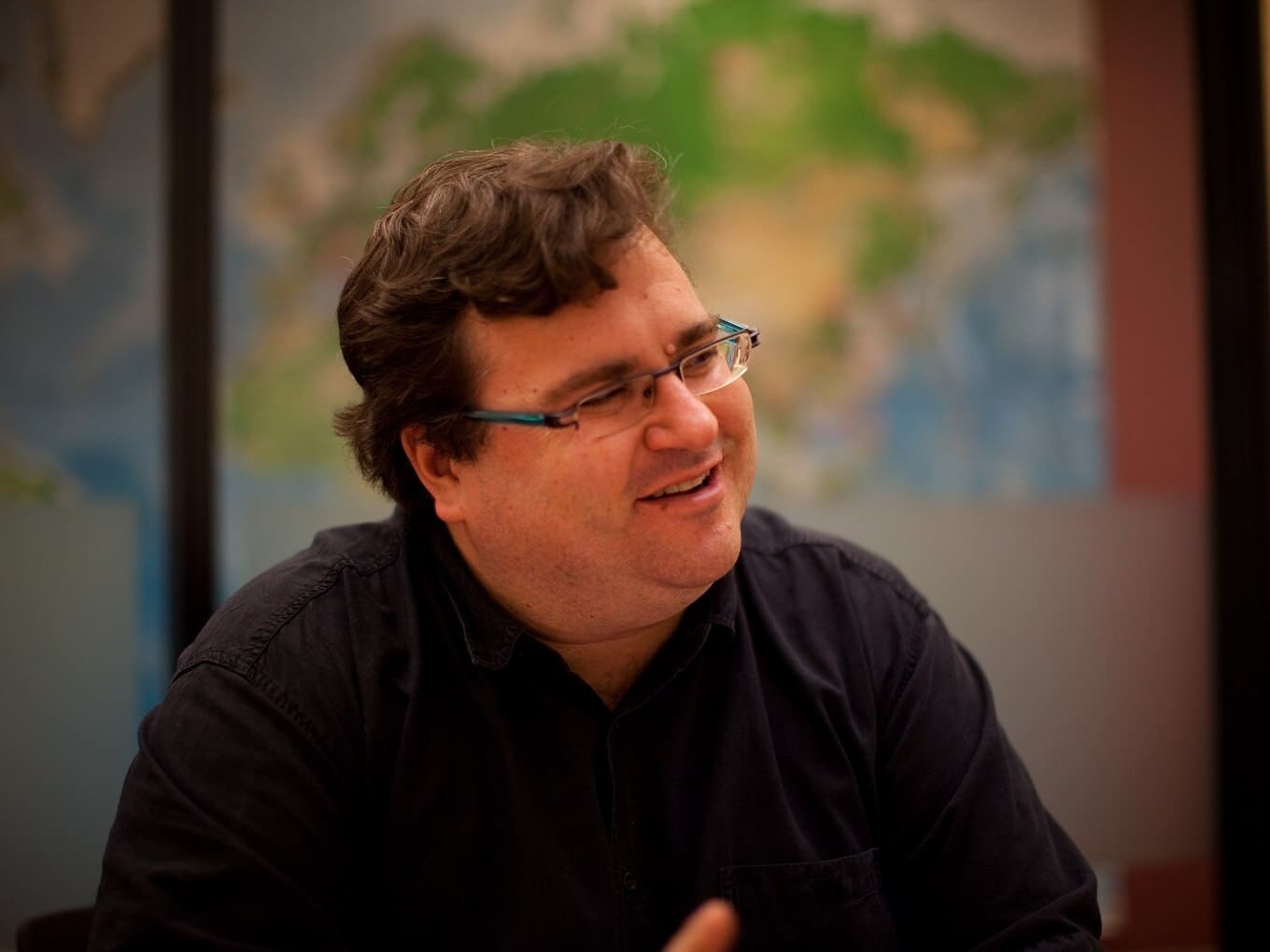 Microsoft announced its plan to acquire LinkedIn yesterday for $26.2 Bn, making it by far the biggest acquisition in its history and making a strong move in enterprise social media. In the words of Satya Nadella, Microsoft’s CEO, the merger happened between “the world’s leading professional cloud” and “the world’s leading professional network.” The network is active in over 200 countries, has 433 Mn registered users and 105 Mn monthly active users, and has a mind-boggling 45 Bn quarterly page views!

How did Reid Hoffman, founder of LinkedIn, come to build the world’s largest professional network? Let’s look at his career path and some of the interesting events—starting from Apple to LinkedIn—which have made him the “most connected man in Silicon Valley.”

Born in August 1967 in Palo Alto, California, to Deanna Ruth (Rutter) and William Parker Hoffman, Jr., Hoffman grew up in Berkeley, the only child of two radical lawyers. His dad did public-service law and his mother had studied environmental law at Berkeley. He attended high school at The Putney School.

While at Stanford University, Reid formed a belief that he wanted to try to influence the state of the world on a large scale. He saw academia as an opportunity to do so. At that time, he was enrolled in a new major called Symbolic Systems, a combination of philosophy, linguistics, psychology, and computer science. He wanted to become a philosopher, and had won a scholarship to study philosophy at Oxford University.  But after studying for three years at Oxford, on a Marshall scholarship, he decided against an academic career. Interestingly, it was during his freshman year at Stanford that he met Peter Thiel, co-founder of Paypal, as well as Michelle Yee, his wife to be.

Reid’s first job was a short-lived online service at Apple called eWorld. Then he worked at WorldsAway, a “virtual chat” community, owned by Fujitsu, where users interacted through fictionalised graphic representations of themselves. In 1997, Hoffman started his own venture called SocialNet, which enabled people to connect with each other for various purposes, mainly dating, using pseudonyms. SocialNet was soon acquired for a modest sum by a company called Spark Networks. While at that time, Hoffman had failed to realise that the most successful online networks would get people to use their real names, but it was a start in his journey towards creating a network. Peter Thiel has said that SocialNet.com was “literally an idea before its time. It was a social network 7 or 8 years before that became a trend.”

From Handling Relationships At PayPal To Creating LinkedIn

While at SocialNet, Hoffman was a member of the board of directors during the founding of PayPal, electronic money transmission service. In January 2000, he left SocialNet and joined PayPal full-time as the company’s COO. Hoffman was responsible for all external relationships for PayPal, including payments infrastructure (VISA, MasterCard), business development (eBay, Intuit, and others), government (regulatory, judicial), and legal. At the time of PayPal’s acquisition by eBay (for $1.5 Bn) in 2002, he was executive vice president of PayPal.

After eBay bought PayPal, Hoffman began investing in social networks. In 2003, for $7,000 he along with Mark Pincus, founder and chief executive of Zynga, bought the Six Degrees patent, a methodology for constructing social networks. And in May 2003, he officially incorporated a new social network – LinkedIn out of his living room, inviting 350 of his contacts to join his network and create their own profiles. It was like SocialNet, except that now people could use their real names and focus on their professional lives!

While he was building LinkedIn, Hoffman also saw the enormous potential of Mark Zuckerberg’s Facebook. In June 2004, he set up a meeting between Zuckerberg and Thiel, which led to Thiel’s first $500,000 investment in Facebook. The next year, Hoffman and Pincus each bought half of 1% of Facebook for $37.5K.

2006 was the year when LinkedIn decided to make all profiles partly public. So, when one types someone’s name on Google search, that person’s LinkedIn profile is one of the top results. 2011 was the year when the company went public, just after it had exceeded a hundred Mn users, and Hoffman officially became a billionaire. As per Forbes, Reid Hoffman has a net worth of $3.7 Bn.

As of today, LinkedIn’s core business is based today around recruitment ads and, to a lesser extent, premium subscriptions for users. The recruitment business accounted for $2 Bn of the company’s $3 Bn in revenues in 2015. With the acquisition, Hoffman, who holds around 14.5 Mn shares of the company, will make $2.88 Bn on the deal.

Hoffman is convinced that the problems of income inequality and slow growth can be fixed through Internet-enabled networks. As per him, work is already becoming more temporary, sporadic, and informal, and this change should be embraced. Many more people will become entrepreneurial, if not entrepreneurs. The keeper of your career will not be your employer but your personal network  – so you’d better put a lot of effort into making it as extensive and as vital as possible. He has stated,

“People will be discovering that the Internet helps their career. One of my theses is that every individual is now a small business; how you manage your own personal career is the exact way you manage a small business. Your brand matters. That is how LinkedIn operates.”

A very interesting fact about Hoffman’s office is that the wall, along with photographs of him with Michael Bloomberg, Bill Clinton, and Barack Obama, also contains a framed “network graph,” produced by the company’s data-analytics team, showing all the connections he makes to other people through LinkedIn. It’s a diagram of thousands of color-coded lines linking nodes on the network, with Hoffman at the centre – by far the most densely connected node!

No wonder, LinkedIn has also provided the White House with some of the data it has collected about its users’ activities in the job market; the data have been used in the annual Economic Report of the President. It hardly comes as a surprise that in April 2014, President Barack Obama named Hoffman as a Presidential Ambassador for Global Entrepreneurship.

As per a United Nations paper on sustainable development goals, the global economy will need 600 Mn new jobs over the next twenty years, and existing business can provide only 10-20 Mn of them. Reid believes that they will have to come from startups, so societies everywhere will have to reorient themselves significantly in order to make entrepreneurship easier.

Hoffman continues to write regularly and writes interesting posts on his blog The Network Age. He has also published a variety of posts as a “LinkedIn Influencer” on LinkedIn. He published an essay proposing a new form of credentialing for university students and professionals entitled “Disrupting the Diploma.” He has also written op-eds in the Washington Post, including one published in 2009 entitled “Let Startups Bail Us Out”, encouraging funding for grassroots innovation in the wake of the financial crisis. He has also co-authored two books. One is The Start-Up of You: Adapt to the Future, Invest in Yourself, and Transform your Career, which argues that individuals should think of themselves as businesses-of-one—the “CEO of their own career”—and draws many parallels between lessons learned from the stories of successful Silicon Valley companies and an individual’s career.

His second book The Alliance: Managing Talent in the Networked Age argues that previous career models of lifetime employment and free agency no longer work in a business world defined by continuous change. Instead, it proposes that employers and employees should think of each other as “allies” and move from a transactional approach to employment to a “relational” one.

Interestingly, it argues that it should be considered honourable to remain in a job for as unthinkably long as four years!

Hoffman is associated with a number of other organisations like Do Something, Kiva.Org, Mozilla, and Endeavor Global, among others. Kiva.org is a micro financing organisation and Endeavor Global is a non-profit organisation that seeks out budding entrepreneurs from all over the world and helps support them. Meanwhile Do Something helps younger generations to bring social change. Much of the work Hoffman is doing is philanthropic. Because in his own words,

What makes the meaning of life is people, so you try to be good to people immediately around you and in your broader community. So a lot of my projects are about how I can affect the world in the hundreds of millions.