The Most Powerful Thing A Leader Can Say

The Most Powerful Thing A Leader Can Say 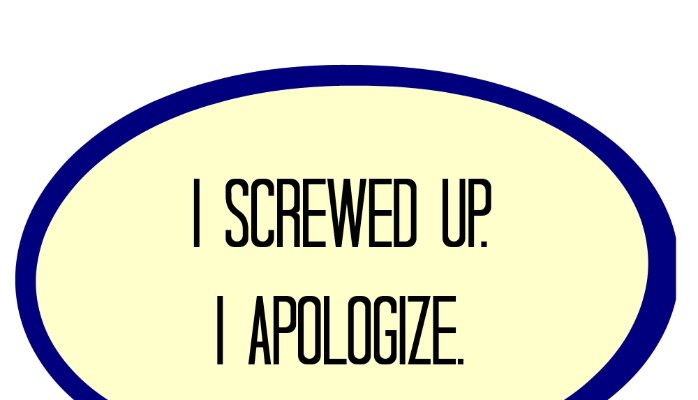 Lee McEnany Caraher
Lee is an acclaimed communications strategist known for her practical solutions to big problems. She’s the CEO of a thriving agency Double Forte. She’s an author, a speaker, a trainer, and a doer, and she’s here to share what she’s learned the hard way to help reduce the drama in the workplace. She blogs at Rocksarehard.com

“I screwed up; I apologize.”

I don’t think a more powerful sentence exists for leaders to say out loud, in public, or to a person or team.

I was reminded of this yesterday at the end of our staff meeting when we wrapped up with “Group Appreciation” and the colleague who approached me said “thank you for saying you were wrong.” Wow. Humbling.

Books on leadership are full of lists of character traits, qualities and skills that make up the perfect leader. I found value in most of these lists, but if the list doesn’t have “Honesty” on it, I’m more apt to ignore it and move on to the next piece for my inspiration.

Honesty is at the heart of trust. And without the trust of the people who follow “leaders” we aren’t real leaders – we are just bosses.

I can’t help hearing “You’re not the boss of me” in my head whenever I say the word “boss” (and I never even watched ‘Malcolm in the Middle‘).

People who have bosses are just biding time until they find someone or something better. People who have leaders will stick with you and commit their time, their brains, and their effort to the cause you’re championing. This goes for leaders of one to leaders of tens of thousands.

It’s more effective and efficient to lead not boss. And at the core of great leadership is honesty.

The fastest way to demonstrate honesty is to fess up when you screw up and apologize for letting the other person, team, party down.

Marshall Goldsmith sums it up so perfectly in “What Got You Here Won’t Get You There”with “I regard apologizing as the most magical, healing, restorative gesture human beings can make.”

I always say “to move from the negative to the positive you have to go through zero.” Zero is the neutral place where everyone has a clean slate and is willing to start building towards the positive. Nothing gets you to zero faster than saying “I screwed up; I apologize” – and meaning it.

Reed Hastings, founder of Netflix, regained the trust of his people and the company’s customers when he fessed up for the insensitive and clumsy way the company restructured their business in 2011. He set the bar.

So how to effectively do this, so you can get to zero and start moving towards positive?

1. Be fast – As soon as you realize you’ve screwed up, say so. If you can’t say so in person, then say so in an email, but don’t delay.

3. Don’t Make Excuses – Explanations of how you got to your conclusions that “guided” a mistake are good, only if you recognize where the flaw in your conclusions are. “I ran out of time” is an excuse. “I underestimated how long it was going to take” is an explanation.

4. Offer a restitution and a path forward that will set you up to not repeat the mistake – “I won’t do it again.” “We will remedy the situation with XYZ.” “I will build more time in next time and provide a check and balance.”

Erika Anderson offers a great, simple primer for how to fess up and apologize in her 2012 Forbes post “Courageous Leaders Don’t Make Excuses…They Apologize”here.

So be powerful. Be honest. Fess Up and Apologize when you need to.