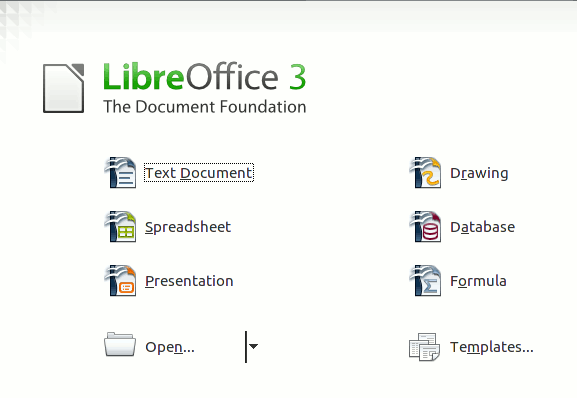 Now that you are up and running on your Linux installation (I hope!), I’ll be introducing you to another tool very useful for people going the open source way. It is something ubiquitous, in fact; everyone needs it at some time or the other. It’s an office suite. And not just any office suite. It’s the flagship office suite of the open source community. It has a long history and a large list of the who’s who of the FOSS (Free and Open Source Software) community are actively working on it. The piece of code I’m talking about is, of course, LibreOffice.

For those of you who have the money to purchase Windows, but not Microsoft Office, don’t worry. LibreOffice works on Windows too.

Right, so down to business! What, when, where, why and the least (or depending on your perspective, most) important, how.

What, when and where

LibreOffice. The premier office suite of the open source community. A relatively new name, this project was known by the name Openoffice.org earlier. Openoffice.org was originally called StarOffice and developed by a company called StarDivision in 1999. StarDivision was acquired by Sun Microsystems, which decided to build an open source alternative to Microsoft’s MS Office. This happened in 2000. From then on, Openoffice.org prospered. Under the guidance of the best and brightest of the FOSS community, the office suite matured into a group of applications with serious firepower.

In 2010, Oracle acquired Sun Microsystems and with it, Openoffice.org. Several developers, concerned with the direction Oracle might take Openoffice.org, decided to create a body known as “The Document Foundation” and forked the code to create LibreOffice.

The first couple of releases of LibreOffice were simply bug-fixes and rewrites. The Original Openoffice.org had a lot of vestigial code which served no purpose. Most comments explaining the code were in German, which was a problem for many programmers. They focussed on bringing the software out of the buggy state it was in. Fast-forward two years, and you have a stable, good piece of code which executes flawlessly, even managing to beat Microsoft office in a couple of areas.

Mind you, it doesn’t blow MS Office out of the water. I am, after all, writing this article on MS Office 2013 Consumer Preview. MS Office does have a lot to show as Microsoft’s Flagship product (If you think I’m mistaken and that the flagship product is Windows, check it out. You’d be surprised.). However, it does have more features than the average Joe needs. Way more than an emerging corporation needs anyway. Wasting money on something you’re not going to use is not the way a start-up needs to go. Now wasting bandwidth on downloading a 200 MB software which you’re going to use as much as you want… now that’s good.

You can download LibreOffice from here. But that’s for later. On to the programs in it!

The first program I start out with, obviously, is the word processor. LibreOffice writer plays the role Microsoft Word plays in the Microsoft Office suite.

The first time you open it, you’ll be strongly reminded of the heydays of Microsoft Office 2003. Yes, the UI is that old. It’s incredibly powerful, though. It has all the shortcuts and keys you’re used and some you’re not. So if you’re a power user, just brush up on them. Writer also has some tools Microsoft Office does not. For instance, an auto-completion feature.

For those of you who’re planning to use it on Linux, I’d recommend you have the Hunspell Library installed. It allows for spell-checking in the Office Suite. For grammar checking (the inbuilt checker is pathetic), the extension “Language Tool” will come in very handy.

LibreOffice Writer has many other things which make it very useful. While I do not wish to go into the nitty-gritties of word processor functions, I can assure you that it does have support for macros and can work with .doc and .docx files. LibreOffice has great support for various and weird formats. I suppose that even if you dug out those old WordPerfect documents your great grandfather saved as a child, it’d still be able to open them.

My personal favourite feature, however, is the navigation bar. While it is true that even Word has it, it’s not as feature rich s that of writer. With Writer’s Navigator, you can jump back and forth in a document not just by heading styles, but by any type of object you care to name: tables, frames, graphics, comments, links, etc.

There’s also a feature to display notes at the side of your document in order to better comment. Notes by different users are coloured differently.

Now don’t expect me to write about Calc as much as I did about Writer. I have used Calc for very light tasks, but being a writer, I don’t have much use for it.

Calc is a replacement for Microsoft Excel, namely, a spreadsheet program. It can open Excel files properly. Complex worksheets do not fare very well, and especially those that contain pivot tables cause Calc to crash. Even with the Excel 2010 worksheets that Calc successfully opened, I noticed some odd problems. For example, an accountant friend of mine loaned me some worksheets that he had created in Excel 2003 but later converted to Excel 2010 format. When I opened these in LibreOffice, some simple sums displayed as the error code “#NAME?”

While I have not worked very extensively with the software, I can tell you that most open-source users have no problems with it. The only people who do are those who will be using LibreOffice in a Microsoft Office-only environment. While MS Office .doc and .docx files are common online, I doubt that people often download Excel files. But if you do, then be careful. Otherwise I have been assured by accountants who use both, LibreOffice Calc is no slouch compared to Microsoft Office Excel.

Impress is the Presentation program of the LibreOffice Suite. It shares the dated interface which LibreOffice frustratingly sticks to. However, the functionality expected from the program is all there under the hood.

It has templates, a vast swathe of animations, and most importantly, the ability to import Microsoft Office PowerPoint documents. While opening MS PowerPoint files, you will be treated to an unwelcome sight of figures slightly skewed or text improperly formatted. However, those occurrences are becoming fewer and fewer as time passes and development continues.

Impress also impresses with its views. It has the normal, outline, notes, hand-outs and slide sorter views. These views enable you to edit your document in any way you see fit.

You can use imported and linked tables and queries from MySQL, PostgreSQL or Microsoft Access and many other data sources, or design your own with Base, to build powerful front-ends with sophisticated forms, reports and views. Support is built-in or easily addable for a very wide range of database products, notably the standardly-provided HSQL, MySQL, Adabas D, Microsoft Access and PostgreSQL.

Math can be used to make complex equations of any sort. Don’t get me wrong, it’s not LaTeX. That mark-up language is built for making scientific papers and what-nots. There is probably no software on Earth which can match it in what it’s good, namely creating documents with complex formatting and specialised (read academic) purposes.

So should you, or should you not? If you’re on Linux, then the only other Office Suite you can think of trying is the Calligra Suite or the now deprecated Gnome Office programs. So you really have no other choice. However, if you, as an entrepreneur, are on Windows, is it better to use LibreOffice or to buy MS office?

Well, what you can to is to try LibreOffice and use it for as long as you do not outgrow it. If you do, or you need features like SharePoint or OneNote, then you can always buy MS Office later. However, I would urge you to try this Office Suite before you turn your pockets inside-out for MS Office. Who knows? You might actually like it enough to stick with it.

Editor’s Note – This article is part of a series on Open Source Software for entrepreneurs.