It All Comes Down To Execution

Nobody cares whether you get up at 8 am. Or 5 am. Or 4 am. Tell Jocko we don’t give a fuck about his warrior mindset.

It’s not a fairy floss concept like “following your dreams” because to be honest with you, dreams aren’t worth a dime. It’s not about health, life, bio or anything else hacking.

It all comes down to execution.

Execution is the single habit that means the difference between mediocrity and massive personal power. Execution is what turns a loose concept or the first spark of an idea into something tangible that you can use to shape the world around you.

Dan Norris wrote one of my favourite entrepreneurship books, The 7-Day Startup. And as well as executing on best selling books, he had this to say about execution in general:

Once you have an idea that has some merit, it needs to be executed well. For a new startup, the goal is to get something to market quickly. However, that doesn’t take away from the fact that it’s an ongoing process to continually execute your idea well.

Execution is your ability to present your idea as well as the best in the world.

You won’t be able to execute your idea inside 7 days to a level that compares to the best in the world. But that should be the goal in the medium term.

There’s no use complaining about being self-funded and not having resources. Customers don’t care. They just make comparisons and make a choice. If you don’t execute as well as the competition, they will chose the competition.

The competition will always beat you if you don’t execute. When you look at search online that seems like a battle that’s already been fought and won by Google, right?

I hate to break it to ya, but Bing makes up 30% of search traffic, is a profitable business and improves every year. Because Microsoft are a company who embrace and drive execution as an organisational philosophy. Microsoft ship. That’s what matters to them.

I meet folks all the time who are wannabes.

? They want to learn how to skate

? They want to build a startup

? They want to sell a T-shirt

? They want to be an Angel

…but it’s all want. It’s all vapourware. There’s no substance, because there’s no execution. And the execution is where they fly off the rails. You know what one of the longest running classic jokes is about founders?

That we own a billion domain names and don’t do anything with them. 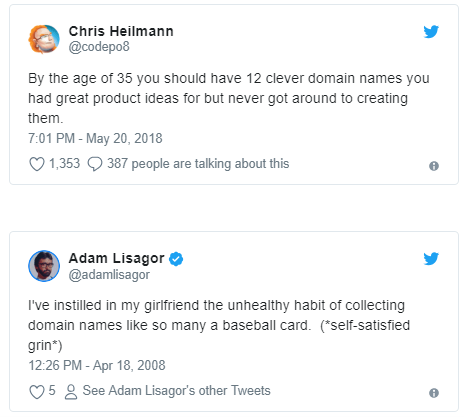 When we dream up ideas, they often don’t move further than the concept. When we dream up this big notion of changing the world or creating something that we care deeply about, it becomes a forgotten project in the distant mists of time.

We’re wannabes. Separating ourselves from that crowd means taking the ideas through to — at the very least — the testing phase, to throw shit at the wall and see if it sticks.

The path through to execution isn’t actually about building successful products or projects. I want to be clear that the two concepts are not irretrievably related. You can execute, and execute well, with no guarantee that something is going to work. And similarly, just because something didn’t work, doesn’t mean that you are not an executor.

Far too often, this comes down to courage. Execution is courage.

Bill Murphy talks about this, about how much we try to distance ourselves from execution because we lack the guts to follow through with it.

Enter Chris Schultz, a New Orleans-based entrepreneur and investor, who spoke recently at Inc.com’s GrowCo conference. Asked for his guidance for aspiring entrepreneurs, he came up with a simple, 1-sentence summary that I think is some of the best advice you’ll ever hear:

“Don’t wait for somebody to give you permission.”

Almost all of us do it. We don’t feel powerful enough to give ourselves permission, and thus we use the lack of external permission as an excuse. You’re a rare and lucky person if somebody else is likely to tell you it makes sense to start a business, or that it’s the right choice to chase after your long-lost love, or that you’re making the right choice by following some other dream.

When you don’t want to experience rejection, you don’t execute. As long as you never try, your idea can always be a fantasy of success that you hold dearly. That’s comforting, it’s just incredibly and innately unproductive. I know that I can dream about launching a new company, or making sunglasses, or collaborating with any one of the 100 brands on my list (I’ll share that list sometime!) and I know that if I never take a shot, I can keep on enjoying that dream.

But that dream is just the scent of good food. It’s not the cooking.

Execution means Nike. It means Just Do It.

I think we do get a little too caught up in big complicated plans and charts and dates and calendars, and sometimes we’re doing all of that to avoid doing it.

The execution may be helped by your careful and meticulous forecasting, but it could equally be blocked by it. I think if you have an idea, you should run with it immediately, throw something out there, and begin building the bones of what you want to do. Because you don’t want to get so mired and bogged down in the pre-work that you forget to do the real work. No matter how good your plans are, you’re not going to make any progress until you run out onto the damn court, are you?

? If you ACTUALLY want to be a blogger, just grab a Medium account and publish something. Anything.

? If you ACTUALLY want to learn how to skate, buy a cheapo board and watch a YouTube video and get ready to scrape yourself up and bleed.

? If you ACTUALLY want to build a startup, do a lean canvas, make a landing page and start telling people about it.

? If you ACTUALLY want to sell a T-shirt, design something in Adobe Spark and throw it on Threadless!

? If you ACTUALLY want to be an Angel, put your money where your mouth is, or find a startup to advise in exchange for equity or at the very least, read Angel by jason and learn how!

? I’m back in the office. I’m back working on shit. I took a spill off my board on the way in, so my leg is a little stiff, but it felt kind of good and woke me up first thing in the morning. I spent almost all day yesterday hanging out with my family again. I do that a lot. I’m a family person, and I love that.

I also caught up on a video chat with the ever cool, ever creative String Nguyen and we just did a chill little brainstorm together.

My schedule isn’t too rough this week. I don’t have any events, so I might get around to cooking some Soba noodles at home one night. I was going to hit the skatepark on Thursday, but I think I’m filling up with meetings, so that might not be a vibe in the end.

I’ll be at BlueChilli tomorrow. Come say hi for coffee in the city if you’re down!

Next week, I’ll be relaunching office hours to start giving some founders a little piece of my time. ?

[This post by Jon Westenberg appeared first on Medium and has been reproduced with permission.]