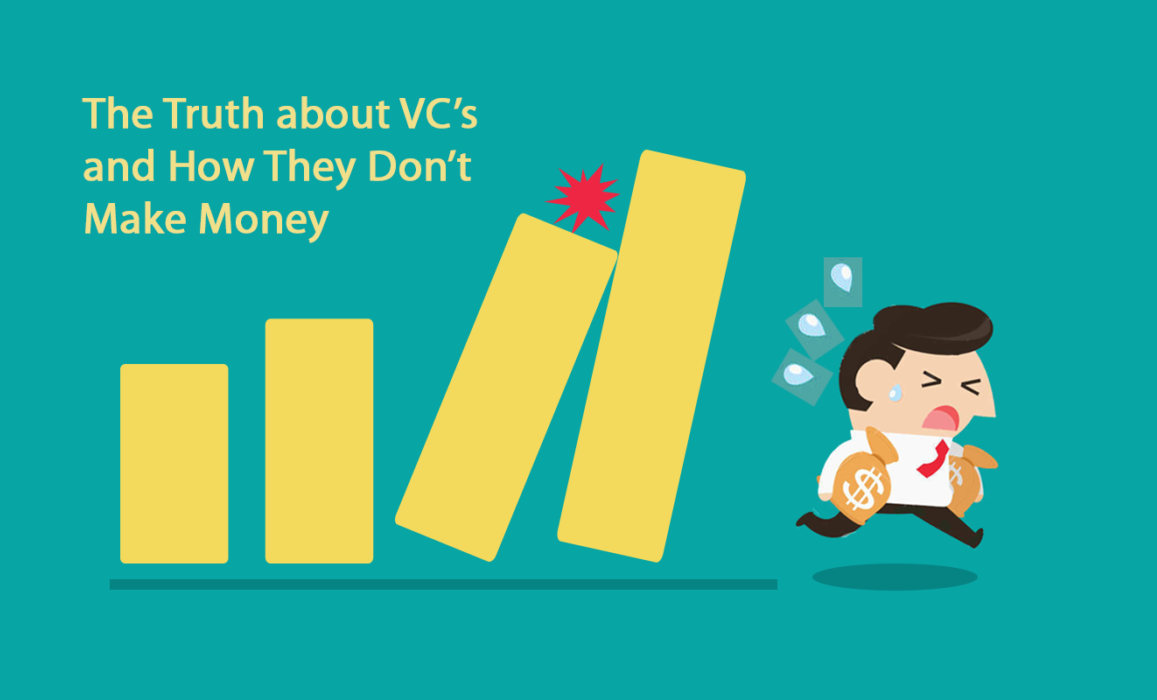 I had a meeting with a well-known startup investor yesterday. The talk somehow pivoted from my seed-seeking startup into talking about the macro view of venture capital and how it doesn’t actually make sense. Or maybe it does make sense? Guess it depends on your point of view.

I’ll clarify what that actually means: 95% of VCs aren’t actually earning enough ROI to justify the risk their investors (LPs) are taking.

I’ll attempt to reconstruct the arguments leading to this hard-to-grasp realisation of an industry so often idealised from the outside.

Before starting, let’s define what success and failure actually mean and list our assumptions:

Venture capitals get their money from limited partners (LPs), who are usually traditional investors such as banks, institutions, pension funds, etc. In their eyes, throwing $50M into a startup fund is “risky” business compared to their other options, such as the stock market / real estate, which could “safely” return 7–8%. For them, 12% return on their money per year is good. Anything below that? Not worth the high risk they’re taking.

That brings us to…

We agreed VCs need to earn 12% return a year, right? Most funds, while only actively investing three–five years, are bound to 10 years. That annual 12% rapidly grows to show the power of compounded interest. Let’s see the math:

A fact of life is that startups are hard. Breaking even is hard. Profits are hard. Keeping profits growing year over year (YoY) is even harder. Out of 10 companies, only two will really explode and IPO/M&A giving our dear VCs some of their money back.

So we have 10 startups and a fund that needs to return 3x within 10 years. Let’s assume it’s a $100M fund, with $10M invested in each company over the course of its life and the desired return of $300M. To be fair, let’s also assume that the VC jumped in on Series A round, followed up on B and has 25% ownership at the end, with non-participating liquidation preferences.

Let’s look at a few different outcomes of our 10 startups after 10 years: 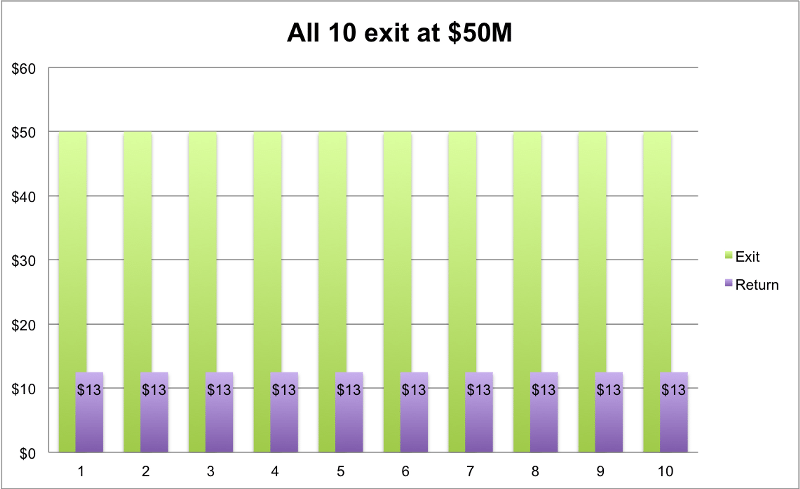 Green marks the exit size; purple the payout amount of the VC with his 25%.

2) Half do average like before and half do better 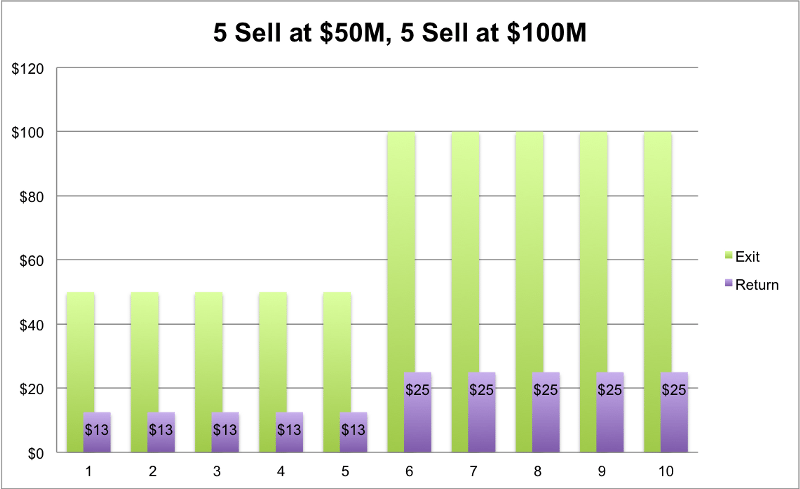 3) Majority do “average”, we’ll throw in an overachiever

4) I think you see where this is going…We need 1 big fat unicorn exit! 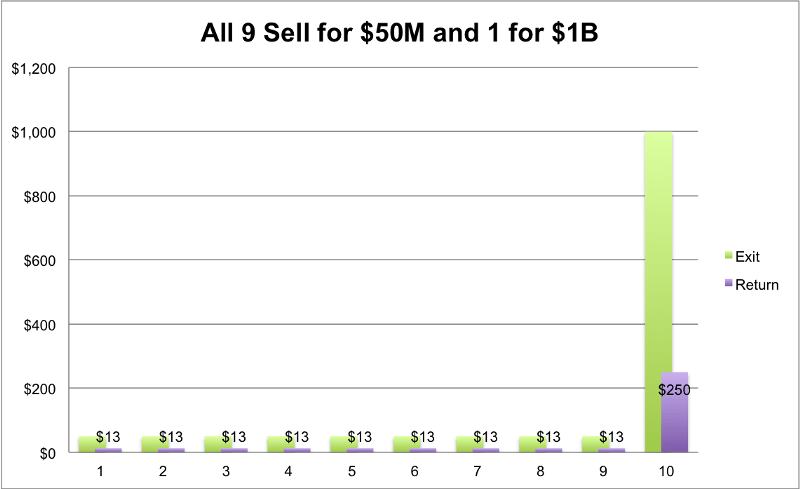 But is the last scenario actually feasible? Can you realistically expect all 10 companies to exit? 100% success rate sounds too good to be true. The more realistic scenario is that out of those 10, 5 will be complete losers, 3 will sell for small-medium amounts (which we just saw barely move the needle) but 1–2 will be big unicorn hugging exits ($1B+) 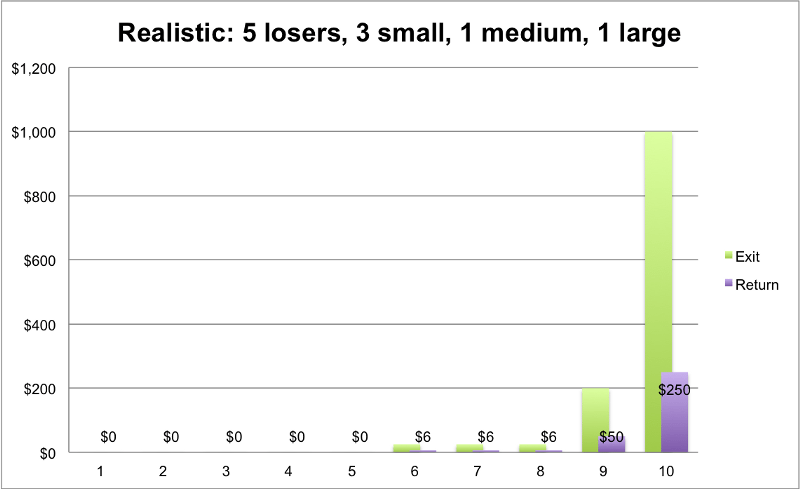 How are VCs doing?

Not looking too good. The graph shows what percentage of VC firms are returning what multiple X of their fund size. As we showed earlier, most funds would need a 3x return to be a good investment ($100M fund => 3x => $300M return). As we can see, only the small green slice is bringing it home. The other 95% are juggling between breakeven and downright losing money. (Remember: to adjust for inflation)

It’s still hard for me to accept the fact that the only realistic way for a fund to get acceptable returns is to try to find only the companies that could be the next Uber’s, Facebooks and AirBnBs. Under these rules, it doesn’t make sense to invest in anyone that can’t get to unicorn stage. There’s just no place for “average” companies looking to be worth and sold less than $500M. At least not with VCs.

The way the numbers work out, it doesn’t look promising for any startup founder with less than shooting-to-the-moon goals. Even less so as for a VC who’s fighting to keep his head above water and secure a follow-up fund. And don’t get me started on the LP’s, who are going to be disappointed at the end of the 10-year fund.

But does it have to be like this? One place we can try to play around is our assumptions tab. Assumptions can and should be challenged.

To summarise, being a VC is a tough business, for all parties. It’s not natural for a founder at stage one to know how he’ll grow from zero to billion. So many things will change along the journey. It’s also not an easy task for VCs to “guess” which startup will be tomorrow’s Uber. Is there actually no way to support and properly invest in a startup aimed at only 9 figures?

Thanks to Gil Ben-Artzy for the insightful meeting / feedback and of course can’t forget Liat Aaronson and Dr. Ayal Shenhav for the countless hours of VC lessons at the Zell Entreprernurship Program that covered all the basics of this world.

[Tomer Dean is a serial tech entrepreneur based in Tel-Aviv working on an ecommerce SaaS startup Bllush. This post was first published on Medium and has been reproduced with permission.]