Things to Learn From The Top Ecommerce Startup in India: Flipkart

Things to Learn From The Top Ecommerce Startup in India: Flipkart 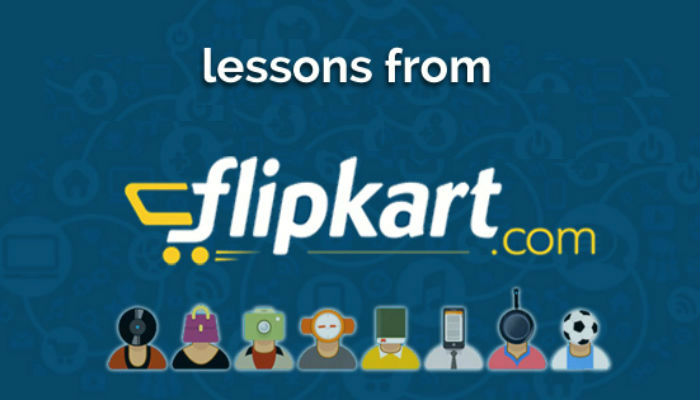 We all know that Flipkart tops the chart in the race of biggest Ecommerce startup in India. With more than $1.8 Bn in investments from 11 Super big investors, here are some lessons you should learn as a startup from them:

I am sure that you all know the brief journey of Flipkart. It started as a online Book store. Sachin himself delivered the books if anyone bought it.

But boy did they just thought of being a biggest online book store? Nope, they had a bigger vision, they wanted to be the biggest player of all things good one wants to buy and can buy online. But did they start as all things at one place way? Nope. They started pretty small to become what they are now.

The world needs you to keep at what you are doing. Its so easy to give, any one can give up, giving up is easy but you are good than that. The Flipkart team sure did face problems, but never gave up and you should never too.

Way back in 2012 (even after some rounds of funding) they faced a failure, am not sure how many of you know about it, but they started a Music store called Flyte. Somewhat similar to what iTunes is, but with a Indian touch. They had a prepaid wallet in it and you can buy songs through it. But after trying to scale it for a year, in 2013 June they shut it down. This shows that even if you fail, just learn from those failures and continue working towards your end goal, your vision.

Flipkart has always been great at experimenting things. They never will stop doing it, and no one should. Thats the beauty of experiments, you learn and grow through them. One of the biggest experiment they did was the BBD (Big Billion Day) which a many of you criticized, but if you look at it closely, think of how amazing it was as a startup. They experienced 1Billion hits on their servers that day. Saw a sale of over $100 Mn in that single day (Most startup even fail to reach the number in a year) and still a lot of people bought what they wanted and they got it.
Experiment, it doesn’t matter if you loose or win through that experiment, you will learn a lot + the Data that you will get it mind blowing. You can use multiple tools (Like Neuron) to analyze those data and understand consumers behaviour.

One of the biggest lesson and quality of Flipkart being a industry leader is that it learned to Dominate. Domination is extremely important. We are not saying that you should dominate in a arrogant way, but dominate your industry and dominate the competition.