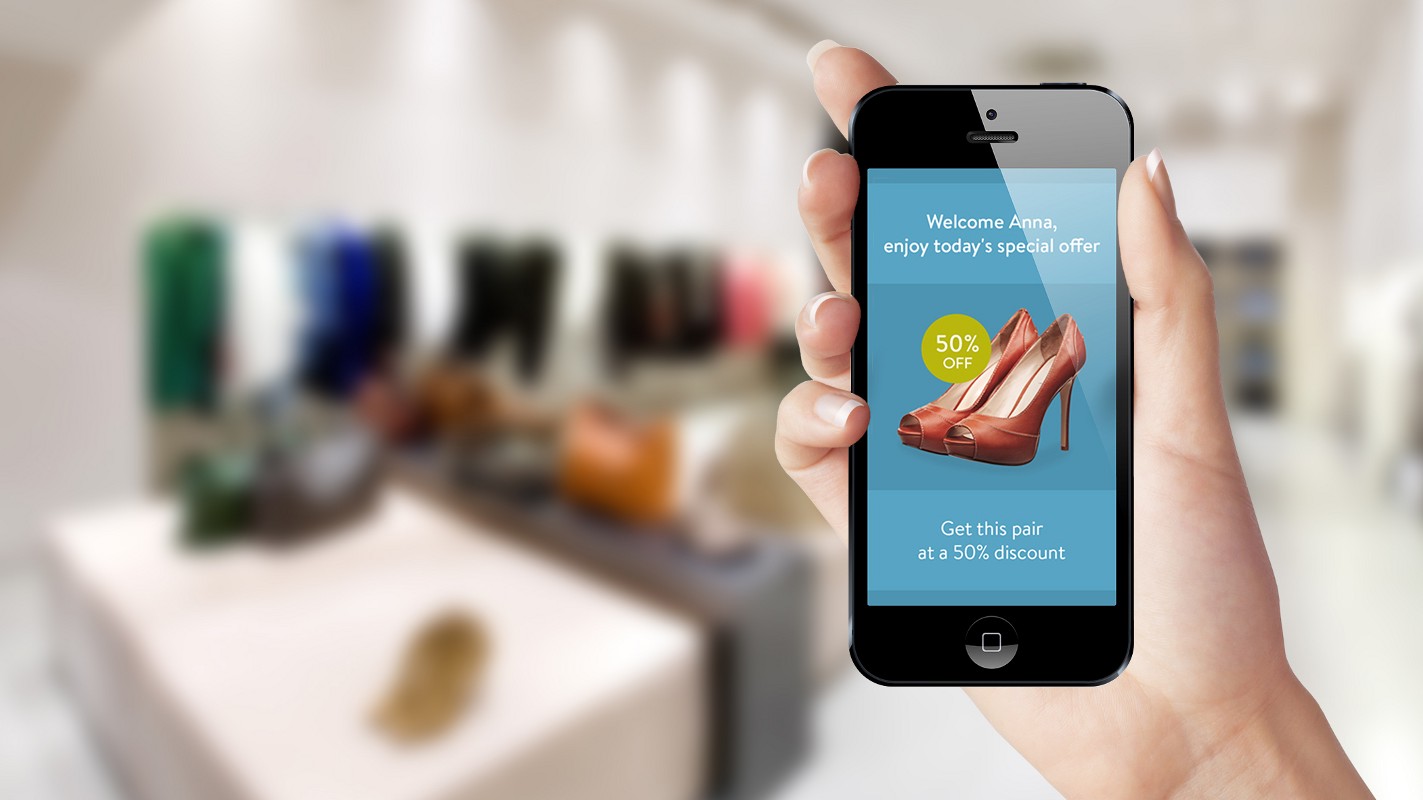 Deepak Abbot
Deepak is Heading Mobile Growth at Times Internet. He had previously worked with companies like Paytm, Reliance Entertainment-Digital, Zapak & Satyam computers.
Let’s take a visual look at how some of the top mobile commerce Apps of India grew in the year 2014, which also points towards the overall growth of m-commerce in India.

2014 has been a landmark year for Indian ecommerce with billions of dollars invested across top commerce players. Most of this investment has gone into the development of infrastructure, marketing & manpower. Interestingly, most of the marketing money is being spent to grow the mobile base. Smartphones & “Mobile Only” Internet users are growing rapidly and India is expecting to double its base of smartphones & mobile internet subscribers by the end of 2015.

Following up on my earlier article on Online commerce in India back in May 2014, I decided to take a deep look at the growth trends of major mobile Apps in India responsible for this monumental m-commerce shift in 2014.

While many reports have claimed over 200mn Internet users in India, my analysis points towards 130mn active base

The universe of people transacting on desktop or mobile. This number grew 2.5X in 2014

For this article, I decided to include 12 popular Apps from diverse commerce categories like Shopping, Travel & Online Recharge. Most of the data presented here has been compiled using various 3rd party services like AppAnnie, XYO.net & PlaystoreAPI which offered good insights on the install base & average monthly growth.

Now lets have a look at the Install base of all the 12 Apps being featured in this article.

Clearly Flipkart with over 17mn base leads the chart, followed by Paytm. 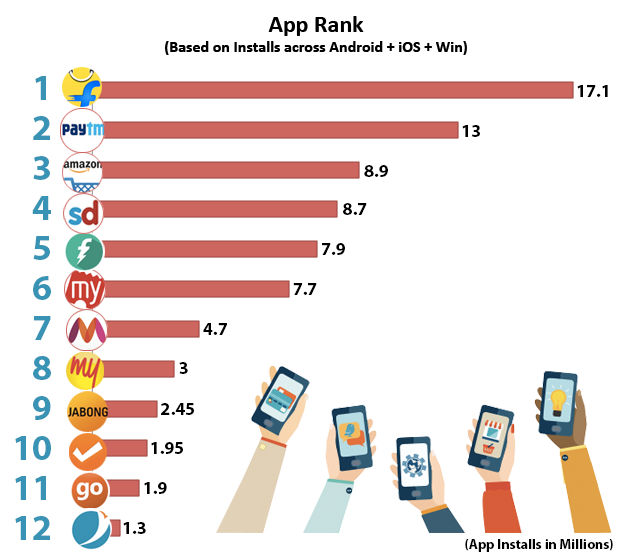 Install base calculated based on the data available on Xyo.net coupled with my own secret formula taking into account the install bracket, total ratings, number of reviews & rank over time in 2014. 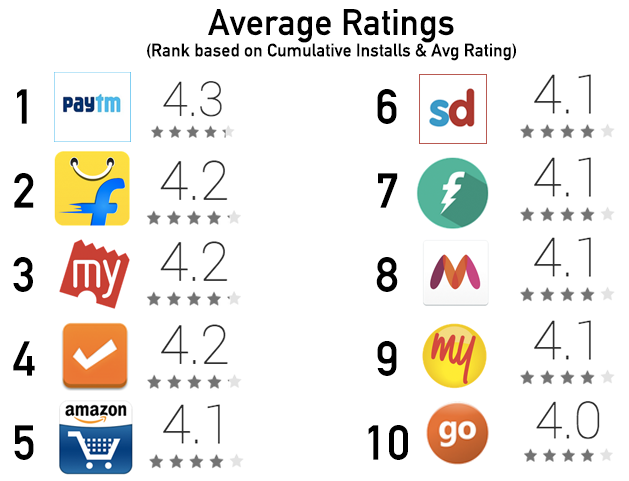 There is no doubt that India is an Android nation and it is quite apparent from the OS share graph below. Paytm, Snapdeal & Yatra look pretty strong on a Windows Phone as compared to others. Makemytrip’s iOS share looks fairly significant which is a strong plus for them. 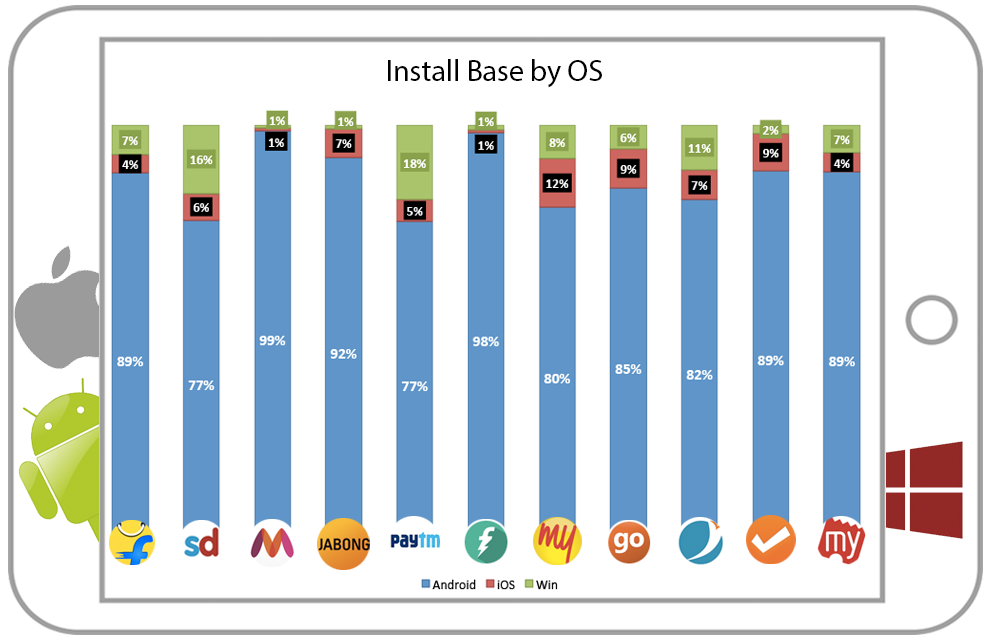 Data based on Install base across various platforms as per Xyo.net

The graph below could be the most contended part of this article as this is derived based on my own analysis. Figures are in contrast to what most of the commerce players claim. Most including Flipkart & Snapdeal have claimed that Mobile has caught up with Desktop. While I do not deny that claim, I am just highlighting the share of Mobile Apps, which is the future of m-commerce in India thanks to the smartphone boom we are witnessing.

Paytm & Freecharge have over 60% orders coming from their Apps while Amazon seems to have the lowest share.

Now lets compare the monthly growth of some of the competitors in the year 2014. This comparison is based on the month on month installs across App stores. 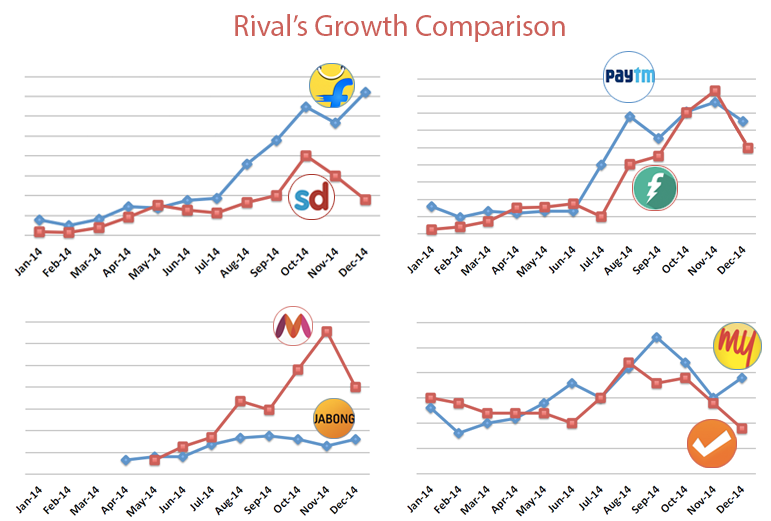 The last part of this article looks at the growth curve for all the 12 Apps featured here. 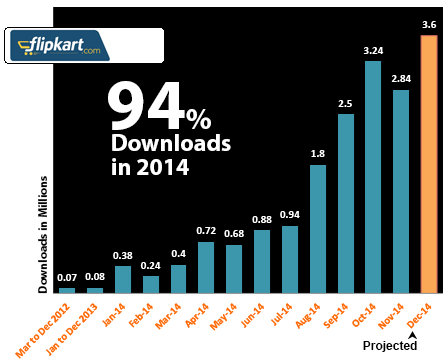 Flipkart App was available on Android in year 2012 but the real push came in the year 2014 when they launched the TV campaign for promoting the mobile App specifically. In October they celebrated Big Billion Day which led to strong growth followed by Mobile App Shopping Days in Dec. 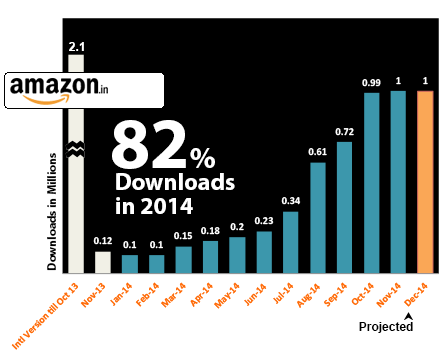 Amazon launched Indian App in Nov 2013 and they have grown pretty steadily from there on. They had a setback when Google removed the App from Play Store forcing them to launch a new App. 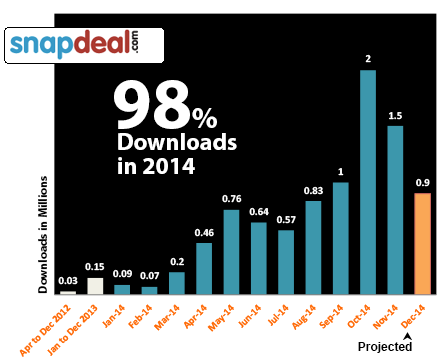 Snapdeal also had their app available in 2012 but the real push came in 2014 with over 98% downloads happening in last 12 months. Oct 14 was their best month with 2mn installs thanks to Flipkart’s Big Billion Day counter sale 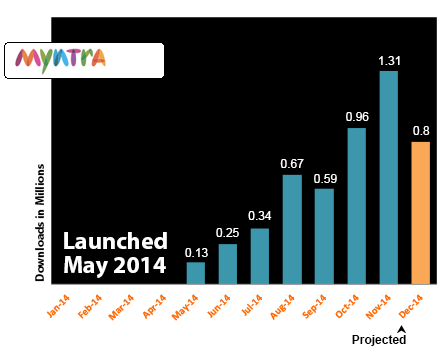 Myntra is one of the fastest growing shopping Apps with over 4.5mn installs within 8 months of its launch. 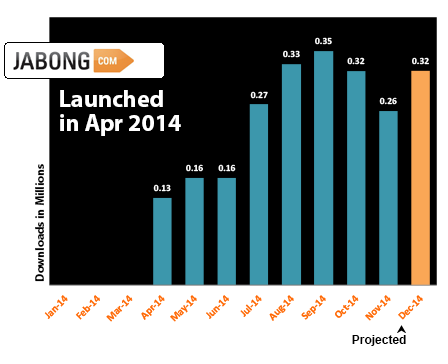 Jabong seems to have a pretty steady growth with no real skyscrapers. They are lagging far behind their arch rivals Myntra. 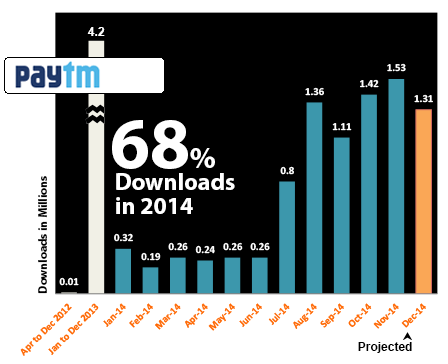 Unlike all other commerce players, Paytm riveted on mobile early on their journey. However 2014 saw them growing rapidly like others. They launched their TV campaign in Jul/Aug leading to the overall spike. Credits to them for maintaining the same pace post the TV campaign. BTW, this brand is pretty close to my heart ☺ 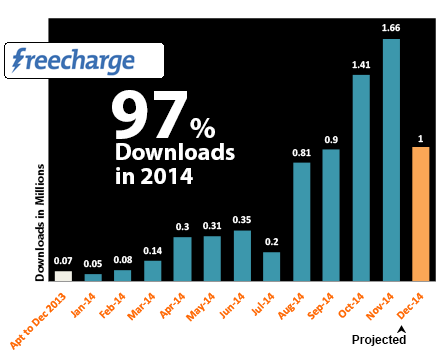 Freecharge got pretty belligerent in its marketing around August which gave their app a real push. They caught up with their arch rivals Paytm in Oct/Nov but seems to be slipping away in December. Their rank on Play Store has dropped rapidly during the last few weeks, which is quite baffling considering the growth they witnessed recently. 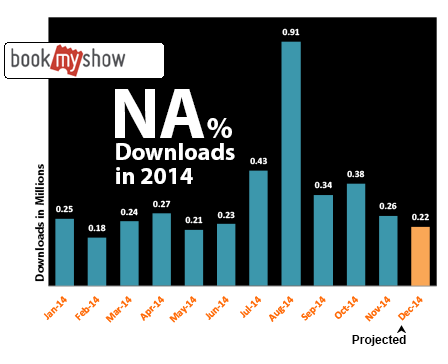 Bookmyshow which got funded by SAIF in June this year at 1000 Cr. valuations aren’t looking very aggressive this year. Barring August where they ran few online campaigns to push its App, they seem to have a flat growth chart among all the Apps featured in this article. 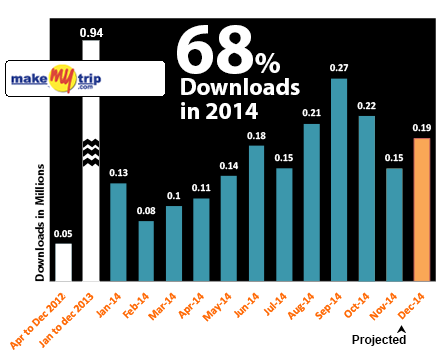 India’s no. 1 OTA got almost 2mn Apps installed in 2014. They seem to have gone slow after growing steadily till September. 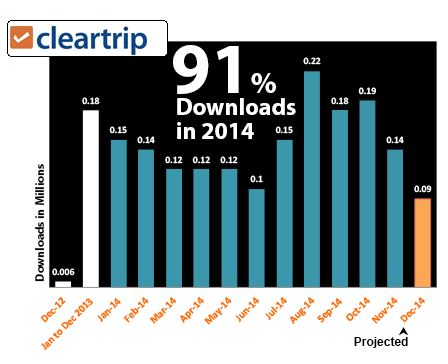 Cleartrip got the bulk of its downloads in 2014 and they came pretty close to MMT in overall installs during 2014. 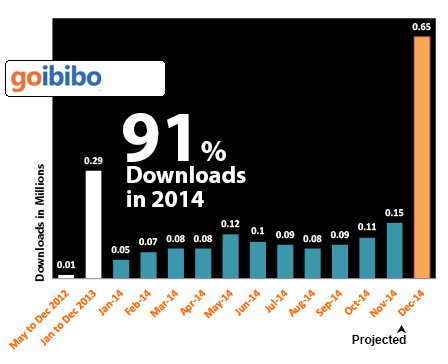 They were growing pretty nicely and then came December ☺They are poised to get more downloads in December than the last 6 months put together. This could be mainly due to the strong referral program started in December. 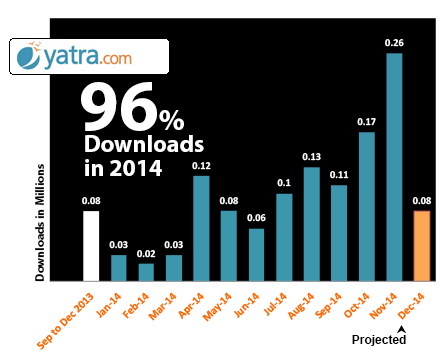 Yatra also got its most stable App version in 2014. They got the highest installs in November as compared to all their rivals in this space. 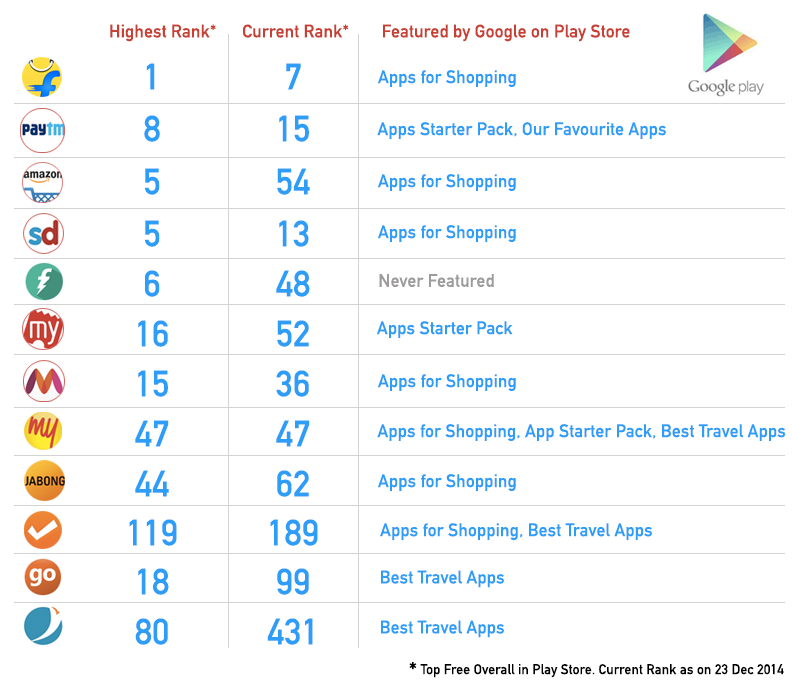 Makemytrip seems to be the most favorite of Play Store having featured under three different sections throughout the year. Freecharge is the only App which never got featured. Kudos to Flipkart for touching the no.1 spot on Play Store beating perpetually popular apps like Facebook, Whatsapp & FB Messenger.

To sum up the article, I created a chart, adding installs from all the Apps above. We can clearly see the surge and the overall trend in this space.

A disclaimer: I have mostly banked on public data splicing it with some of my own analysis based on learnings & interactions with my peers in this industry. I believe this data may have ~10% deviation, but it gives a fairly accurate growth trend overall.

Feel free to share your views on this data and help me improve this article if you have access to accurate data ☺I will be happy to hear your feedback. Do connect with me on Twitter @deepakabbot or mail me at [email protected]