How Technology Is Changing The Outlook Of Breast Cancer Treatment And Diagnosis?

How Technology Is Changing The Outlook Of Breast Cancer Treatment And Diagnosis?

In India, with 160,000 new cases every year, breast cancer accounts for 14% of cancers in Indian women

Many Indian oncologists consult more than 1000 new patients per year, and their workload is among the highest globally 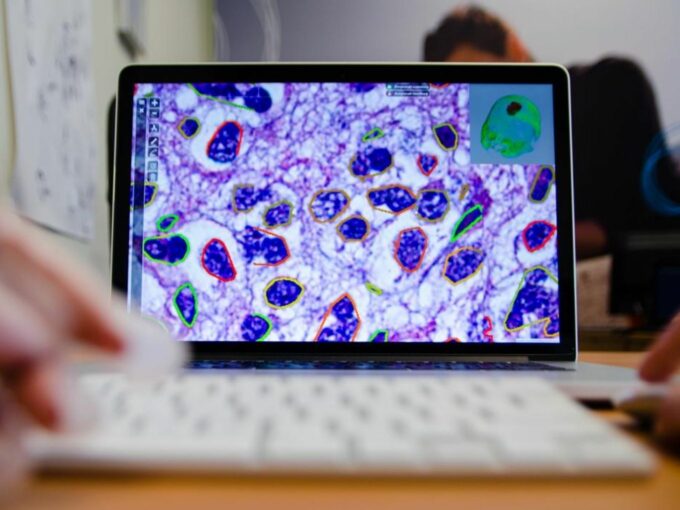 Over the last two decades, cancer treatment has seen tremendous progress. A deeper understanding of the biological basis of cancer and faster adoption of technologies like Artificial intelligence and Machine Learning has redefined cancer care. Technology has become a key force in improved diagnosis and treatment of breast cancer. Other than increased awareness, advancements in science and technology have caused huge breakthroughs in breast cancer treatment over the last 50 years.

Introduction of screening programmes involving annual mammograms in many countries has had a positive effect on the number of people being diagnosed earlier. Patients detected in the early stages of breast cancer are those most likely to experience improved outcomes as a result of catching the disease early. Some of these cancers have an almost 100% survival rate if detected very early.

Breast cancer is the most common type of cancer in women worldwide. In India, with 160,000 new cases every year, breast cancer accounts for 14% of cancers in Indian women. There is also high breast cancer mortality in India largely due to the fact that 50-60% cases get detected in later stages (Stage III and IV).   The country has only about 2000 trained oncologists to treat 11.5 lakh new cases of cancers plus millions of survivors.

Many Indian oncologists consult more than 1000 new patients per year, and their workload is among the highest globally. Tools like tele-medicine have really helped patients in remote areas to get access to cancer care. Mobile van-based screening programs using sensitive 2D/3D ultrasound can go to small villages/door steps and diagnose breast cancer early. Tele-medicine has also really helped all cancer patients during the ongoing pandemic.

In the last 10 years, various new screening modalities have been developed, to help expand access to screening and boost early detection. These newer techniques using thermal imaging and piezoelectric technologies are non-invasive, portable and can be easily deployed in Tier 2 and 3 cities in developing countries like India.

Going one step further, we are now learning to predict who might develop breast cancer in the future. The effects of Artificial intelligence (AI) and Machine Learning (ML) are visible in many industries, and healthcare is certainly no exception.  A recently published study by a leading US university on a new deep learning-based prediction model can forecast the development of breast cancer up to five years in advance is one such example.

The Role Of Technology In Reducing Side Effects Of Cancer Treatment

Radiation therapy has a vital role in the treatment of cancer. Especially in breast cancer, increased availability of radiation therapy machines has let more and more women opt for breast conservation surgery (BCS) rather than mastectomy. Both BCS and mastectomy have similar long-term outcomes in terms of patient survival, but BCS really impacts the psycho-social aspect of treatment. Women who are able to conserve their breasts report better body image scores and higher levels of satisfaction.

Recent advances have improved the effectiveness and at the same time decreased the complications of radiation therapy. These advances include stereotactic, intensity-modulated, brachytherapy and intraoperative radiotherapy. The new techniques involve improved ability to focus radiation on target tissues, sparing nearby healthy tissues. The way radiation therapy is administered has also undergone changes. Partial breast irradiation and use of shorter hypo-fractionated schedules are other advances that improve the patient’s quality of life.

The Role Of Technology In Improving Patient Outcomes

Increasingly, we are seeing a more personalized approach to cancer treatment, rather than a one-size-fits-all approach. Personalized medicine works by analyzing patient-specific information and prescribing them therapies best suited to treat their cancer and prevent it from returning.

Personalization of treatment can be game-changing in many ways

Targeted cancer therapies are another great example of technical advancement in breast cancer. Targeted therapies or drugs block the growth and spread of cancer by attacking specific biomolecules that are involved in cancer signaling pathways, versus most standard chemotherapies which act on all rapidly dividing cells whether cancerous or not. Many targeted drugs have been approved by the FDA to treat specific types of cancer. Another promising area of targeted cancer treatment is immunotherapy which taps into the ability of using a person’s own immune system to fight cancer.

Cancer vaccines are another topic of great interest. For cancers caused by viruses such as hepatitis B that can cause liver cancer and the human papillomavirus that can cause cervical cancer, vaccines already exist which prevent infection with these cancer-causing agents. By blocking the viruses from infecting body cells, these vaccines prevent the development of subsequent virus-associated disease.  For cancers not caused by virus, researchers are working to develop vaccines that they hope will activate the immune system to attack cancer cells reliably and effectively. If successful, these cancer vaccines can be a big game changer in the future!

Cancer is a life-altering disease that impacts a patient physically, emotionally and financially. With modern science and technology, treatment of cancer isn’t as frightening as it might have been earlier. The new technological developments in breast cancer treatment and diagnosis provides a ray of hope for those affected by the disease.