Gaana vs Saavn – Who’ll Become the Spotify of India? We don’t have all our favourite songs stored when we want to listen to them, nor do they play on the radio when we want them. And that is when apps like Gaana and Saavn come to our mind. Gaana launched its new version V 5.0.0 recently which made us ask a question – Will it be better than Saavn? We have been using Saavn for quite some time now. It would be interesting to see what the new update of Gaana beholds.

We will start by comparing the user interface of both the apps. On one hand, We have Saavn which has has a very neat, clutter-free user interface which is soothing to the eye. The header of the app consists of 2 simple options: Language Selection and Search Bar. The language selection is really helpful to a user to toggle between the number of languages quickly. There is a row below it with 3 options: Top 15, Surprise Me and Download. The ‘Top 15’ option queues the trending fifteen songs in your playlist. Whereas, ‘Surprise Me’ actually surprises by loading a mix of some unheard songs from old and new movies. ‘Download’ gives you purchasing details of its premium plans. The other options available at a quick access to the user are his own playlist, New Releases, Chart Toppers which includes chart toppers from different languages, Radio, Moods & Genres and Top Playlists. 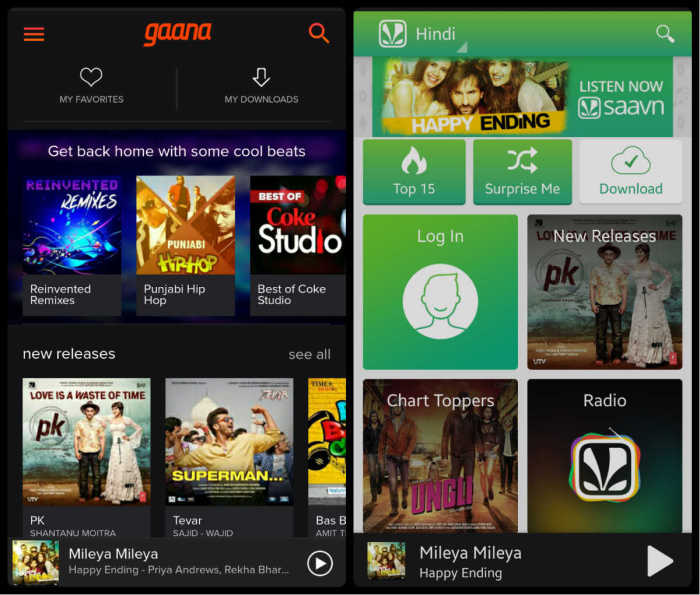 While on the other hand, The new Gaana app has a sharp black theme making its options highlight; completely opposing to Saavn. The header has an ‘Options’ bar to the left and a search bar to the right. Unlike Saavn that lets you shuffle between languages from the main screen, in Gaana you have to go to Settings > Select Language and then choose Language Preferences. The home screen of the app has New Releases in the top followed by Playlist of the Hour, Top Charts and Radio Mirchi. Gaana also has Music Videos which is an advantageous feature not present in Saavn. The home screen has an infinite scroll because of which you will have endless supply of music to choose from. We wonder if this list will end up showing the entire 3 million songs in Gaana’s database.

The music streaming for both the apps is equally good. On one hand, Gaana plays my music playlist smoothly while on other Saavn has a major drawback of is its advertisements which are played for 10 seconds! And sometimes, these ads play at the end of every song. The music player of both the apps looked crisp. But, We loved Gaana’s music player as it gave us the options to see the lyrics and the video of the song instantly. If you just want to listen Bollywood & English music then Gaana is nothing less than a royal feast to you. Gaana is more focussed on Bollywood and English music focusing less on regional music. Saavn scores some brownie points here by putting more focus on regional languages. Personally, I was elated to find the lesser-known artist Rekha Bharadwaj’s music was available aplenty on Gaana, whereas Saavn returned no results.

Another major difference we noticed is the presence of the app in the notification panel. 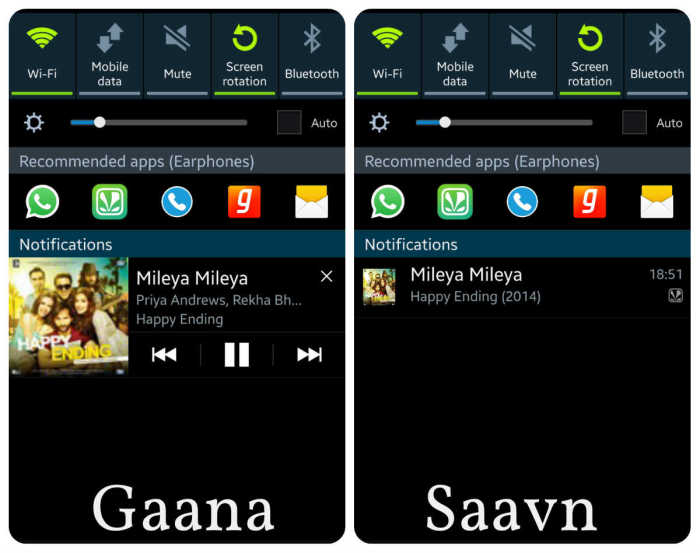 After reviewing the subscription plans for both the apps, they somewhat had similarity for their daily and monthly plans i.e Rs. 5 per day and Rs. 30 for a week. Gaana charged Rs. 99 for their monthly plans whereas Saavn charges Rs. 110. Gaana also has a yearly Rs. 1020 plan (that translates to Rs. 85 per month) and allows upto 5 devices. On the other hand, Saavn gives a monthly subscription of Rs. 220/per month which has unlimited music download storage on up to 5 devices. Gaana has announced a tie up with Paytm, allowing users to earn talk time of up to Rs. 100 by inviting friends to their service. This move will particularly help themselves in promotion.

Now that we are more accustomed to Saavn since we’ve been using it for so long now, would we switch to Gaana overnight? My answer would be Yes. I found Gaana a more fulfilling experience overall than Saavn. But hey, there’s no harm in keeping both the apps around now, is there?

[Editor’s Note: This article is contributed by Ruchita Mahimkar]